Accessibility links
Gang Of 8 Champion Plan, Declare 'Year Of Immigration Reform' : It's All Politics Bipartisan bonhomie broke out Thursday afternoon when four Democratic and four Republican senators made a case for their comprehensive immigration overhaul proposal. "America is an idea; nobody owns it," said Sen. Lindsey Graham, R-S.C. "We've got to create order out of chaos." 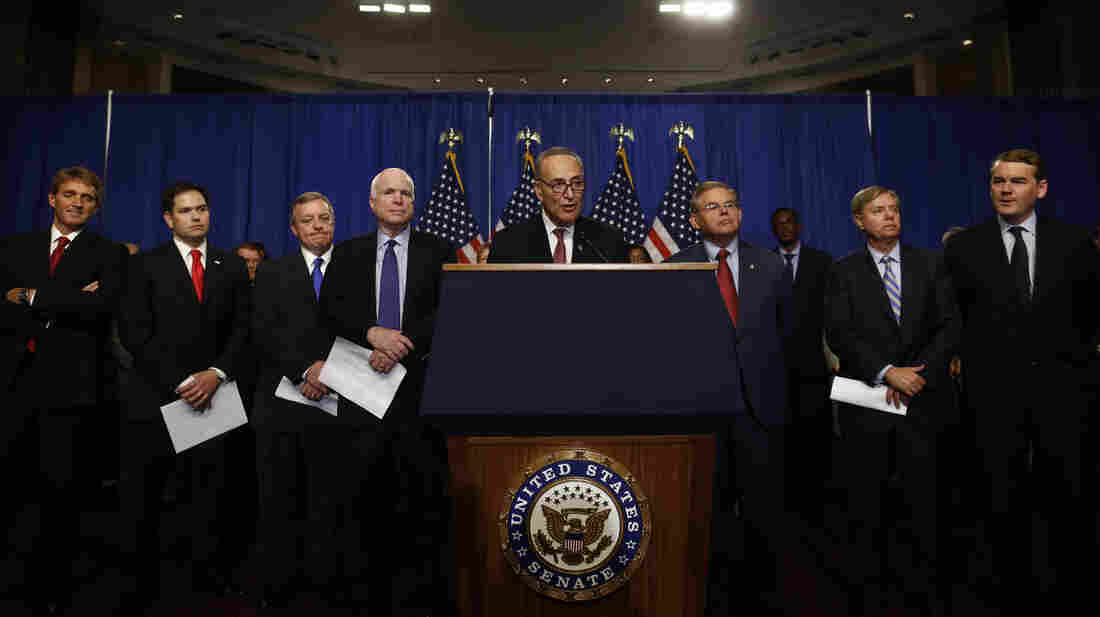 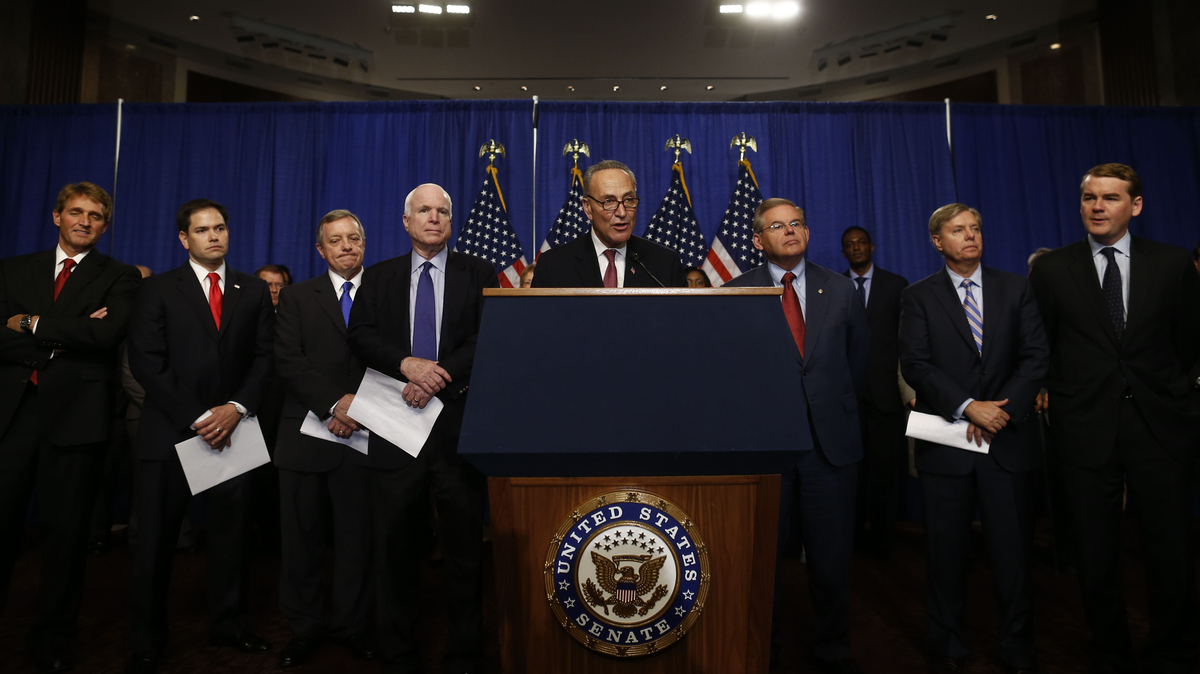 Bipartisan bonhomie broke out Thursday afternoon when four Democratic and four Republican senators made a case for their comprehensive immigration overhaul proposal.

The scene at the Dirksen Senate Office Building stood in marked contrast to the ugly end Wednesday of a smaller cross-party effort to fashion gun legislation that would have expanded background checks and banned assault-style weapons.

"I think 2013 is the year of immigration reform," said GOP Sen. Lindsey Graham of South Carolina, who, with the other senators, stood in front of representatives of a diverse coalition — from the AFL-CIO to the Chamber of Commerce — that has gotten behind overhaul efforts.

"America is an idea; nobody owns it," Graham said. "We've got to create order out of chaos."

The senators characterized their series of two dozen meetings as tough but straightforward, and with areas of deep compromise save one.

"[The] evening we set aside for the DREAM Act was a pretty short meeting," Democratic Sen. Dick Durbin of Illinois said. "Everybody said it was time."

Republican Sen. Marco Rubio of Florida made a point of addressing his supporters who are skeptical of the proposal, which provides a path to citizenship for the estimated 11 million illegal immigrants current in the U.S.

"We all wish we didn't have this problem, but we do," he said. "Leaving things the way they are, that's the real amnesty."

Rubio, seen as key to the bill's forward motion, said that no one has the right to illegally immigrate to the U.S., but that those here are not going to be deported.

It is "in our national interest" to bring people "out of the shadows," he said. "This is who we are. We are the most compassionate nation on earth."

"A little straight talk here," he said. "Republicans have got to compete for the Hispanic voter."

McCain and the other senators portrayed the bill as a document of hard-earned compromise, but one that is far from a final product — and one that will face efforts by opponents to insert amendments that would kill the thing.

Said Graham, the South Carolina Republican: "We're going to be aggressive in marketing the bill. This is an all hands on deck approach."

New York Sen. Charles Schumer, the Democrat who with McCain led the bill-writing effort, said that the issue is "ours to lose."

"I think we have a great product here," he said. "I don't think it's at all like gun control — it has broader support on a broader basis than guns did."

The 844-page bill is expected to be debated over the next few months.

"We're either gonna get a bill," Graham said, "or have one hell of a fight."

Here are some highlights from the legislation:

Path To Citizenship And Border Security