Accessibility links
Max Baucus Says He Was Montana's 'Hired Hand' On Gun Vote : It's All Politics In an interview with NPR's Robert Siegel, Montana Sen. Max Baucus says he broke with Democrats on gun legislation because he represents the wishes of Montanans and agrees with them. 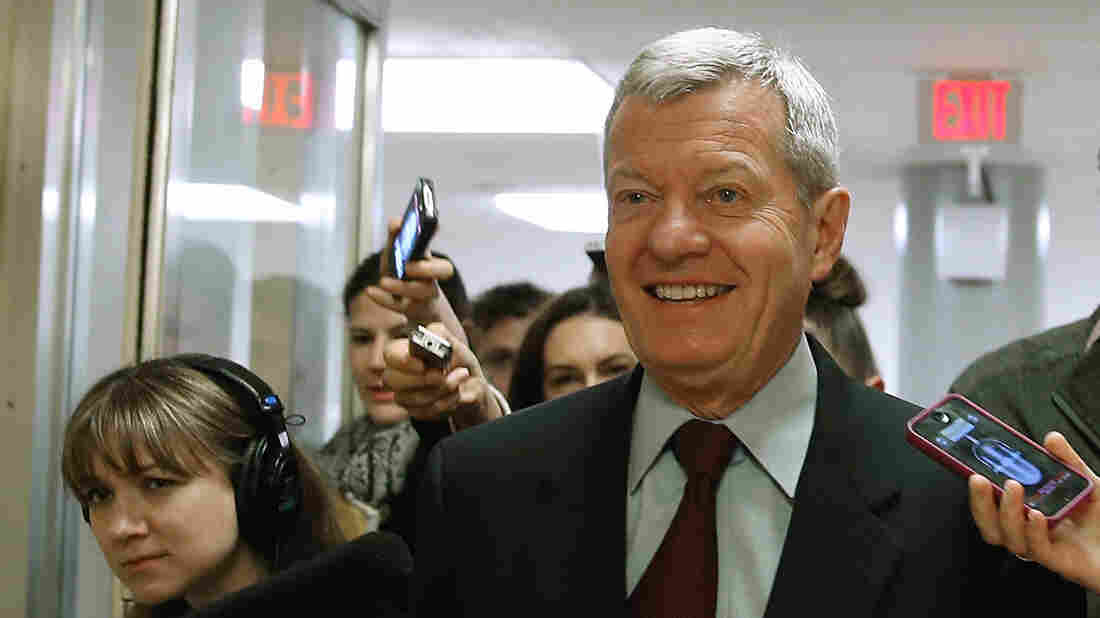 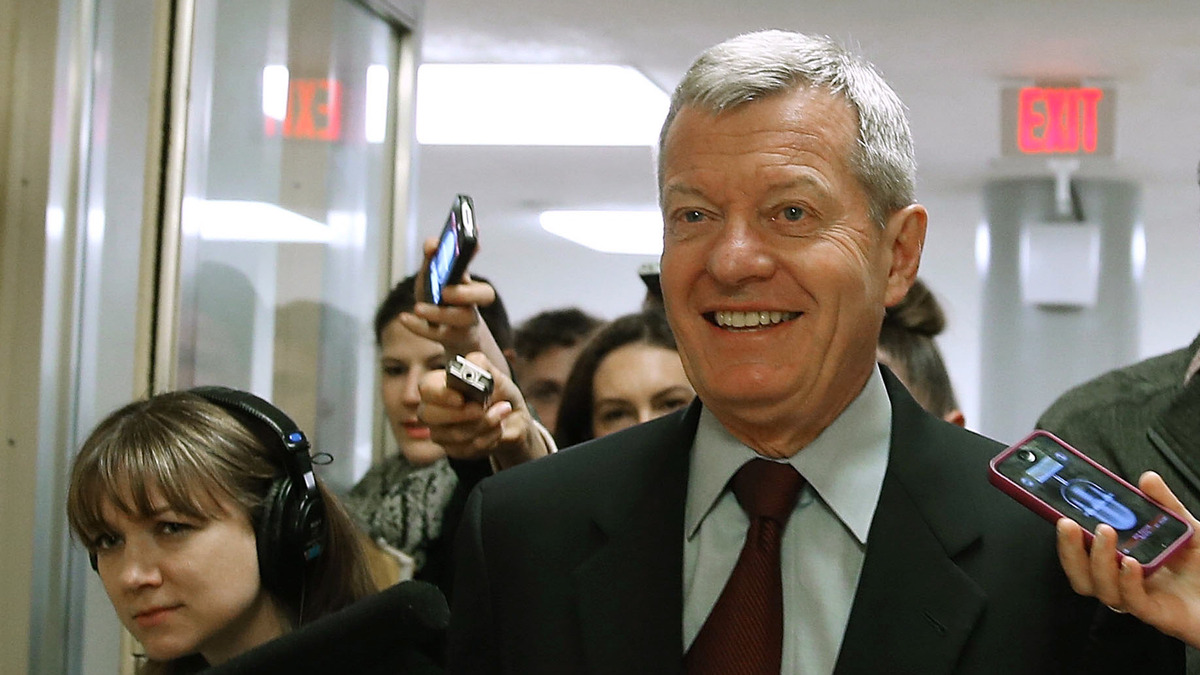 Sen. Max Baucus, D-Mont., is trailed by reporters Monday on Capitol Hill after announcing that he'll retire in 2014.

Longtime Democratic Sen. Max Baucus of Montana announced this week that he would not seek re-election next year, ending four decades in Congress and leaving as chairman of the powerful Senate Finance Committee.

Pressed by Siegel about his vote last week against expanded gun background checks — given that he knew he would not have to worry about re-election — Baucus characterized himself as "just a hired hand" carrying out the wishes of his Montana constituents. He also said while he'd been considering retirement for months, he didn't decide for sure not to run for a seventh Senate term until this Monday evening, five days after the gun vote.

"I believe very, very strongly that when you serve, you serve the entire state," said Baucus, who has an A+ rating from the NRA.

"I agree with the majority of people in Montana," he said, when pressed by Siegel about what motivated the vote. Polls have shown a wide majority of Americans, including from many conservative states, support expanded background checks. We have not found a nonpartisan poll specifically of Montana voters.

Baucus was one of four Senate Democrats from conservative states who voted against the background check proposal. Montana Sen. Jon Tester, Baucus' Democratic colleague, who has an NRA rating of A-, voted in favor of the proposal.

In 1996, Baucus endorsed major gun control legislation, then eked out a win in his next election by just 5 percentage points — his closest Senate race. He won five years ago with 73 percent of the vote. But his current approval rating sits at 45 percent in a state Obama lost last year by 13-plus points.

Baucus has been criticized by fellow Democrats for his role in extending bipartisan negotiations over President Obama's health care proposal long after it was clear no Republicans would vote for the measure.

Baucus on his role in the health care battle.

Critics say the longer the fruitless efforts continued, the more opportunity it gave opponents of the bill to marshal forces and attack the measure. Supporters say he was key to getting the 60 votes in the Senate it needed to pass.

Siegel questioned whether Baucus, who as Finance Committee chairman was instrumental in writing the health care bill, squandered Obama's political capital in 2009 and into 2010 pursuing Republican support for it.

"You can't operate by hindsight," he said. "It was very clear to me that a bipartisan bill would have much stronger support and be much better for the country."

Siegel asked Baucus about reports suggesting that Washington lobbying firms are chockablock with his former staffers, noting one report that says 28 of his former aides have lobbied on tax issues during the Obama administration — more than any other office.

Asked Siegel: "Is your office the epitome of the revolving door?"

Baucus said the number of former staffers on K Street is simply a reflection of the fact that he's been in Washington for four decades and hires "intelligent, very talented people."

In a follow-up to the interview, Baucus' office said that since 2000, the senator has employed more than 1,000 staffers, and that fewer than 4 percent of them have gone on to become lobbyists.

Others have gone on to careers in public service, including nearly 20 have served in the current administration, from the IRS to the White House, where Jim Messina served as Obama's deputy chief of staff.

Baucus told Siegel that everything has to be on the table in negotiations to simplify the federal tax code — including deductions for home mortgage interest, charitable contributions and state and federal tax payments.

Baucus says mortgage deductions should be on the table.

Baucus also said that low tax rates applied to "carried interest," a tax code characterization of profits made by hedge fund managers and others in private and venture capital, are a loophole that should be repealed.

He also sees compromise in what will happen with revenue generated if the tax base is broadened. "Some of the revenue will go to a rate reduction and some of it to a debt reduction. That would probably be a good solution."

Will Baucus himself take up a new career in lobbying?

He said: "I'm just hankering to get home. My blood, my roots, my soul is in the state of Montana."