Accessibility links
ATF Allies Say Agency Handicapped By Lack Of Director : It's All Politics While the ATF is a fraction of the size of its sister agency, the FBI, it runs the show when it comes to tracing weapons at crime scenes and investigating bombs and arson. But the agency has been without a permanent director for almost seven years. 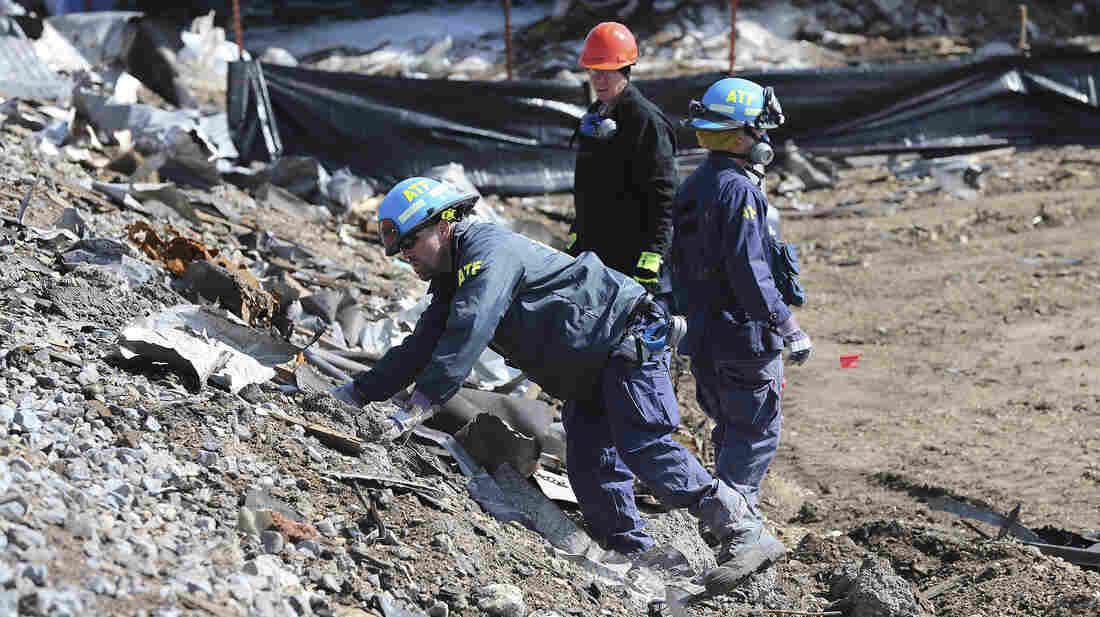 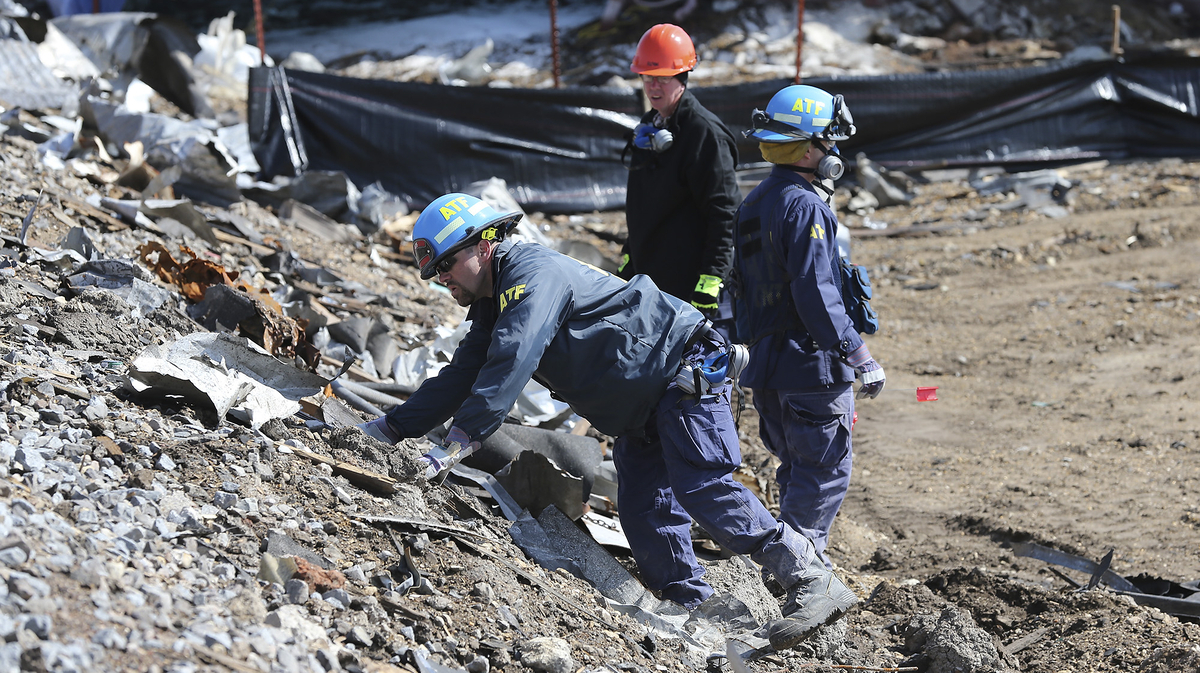 ATF agents search last week for evidence at the site of the fire and explosion in West, Texas.

It's one of the smallest law enforcement agencies in the federal government, but the Bureau of Alcohol, Tobacco, Firearms and Explosives has sure had a busy couple of weeks.

Dozens of its agents raced to Boston, where they analyzed bombs left near the finish line of the marathon. Others went south to Texas, where a fertilizer plant exploded under mysterious circumstances. Members of the ATF's national response team are still on the scene in tiny West, Texas, sifting through rubble at the blast site, near a crater that's 93 feet wide.

With a little more than 2,000 agents, the ATF is a fraction of the size of its sister agency, the FBI. But it runs the show when it comes to tracing weapons at crime scenes and investigating bombs and arson.

Even as ATF agents play a major role in investigations, though, the bureau's allies in law enforcement say it's operating at a handicap, without a permanent director.

"You need a director in place," says Bart Johnson, executive director of the International Association of Chiefs of Police, which has been pressing Congress to move on the issue. "It's sometimes unsettling not to have a boss overseeing the activities."

In fact, because of bitter divisions in the U.S. Senate over gun regulations, it's been almost seven years since the agency had a permanent leader. Earlier this year, President Obama nominated the acting chief, B. Todd Jones, to direct the ATF. The White House said Jones, a former Marine, would help the law enforcement agency do its job.

Yet Iowa Republican Sen. Charles Grassley has his doubts. Grassley said recently he's not getting all the documents he wants about a long list of ATF controversies.

"I believe that the ATF needs a Senate-confirmed director," he told fellow members of the Judiciary Committee. "However, if we're ... prohibited from asking questions about important matters that get to the core of leadership, character and candor, about a nominee's ability to run an agency, it makes our job of confirmation that much harder."

Grassley has raised questions about Jones' treatment of whistle-blowers and about his role in a big ATF scandal known as Fast and Furious, in which agents along the Southwest border lost track of about 2,000 weapons. Some of them later turned up at crime scenes, including the murder of a U.S. Border Patrol agent.

But Jones, a top federal prosecutor in Minnesota, came onboard after that scandal erupted. Shortly after Jones' nomination this year, a new issue arose, when a former FBI official in the state faulted Jones for not making the fight against violent crime there enough of a priority.

That former FBI official, Donald Oswald, didn't return NPR's call for comment. But his criticism doesn't sound right to Robert Small, now a judge in Hennepin County, Minn., who worked with Jones in the U.S. Attorney's office for years.

"Not always did law enforcement folks agree with the priorities," Small says. "But, you know, that was the United States Attorney's job ... to establish the prosecutorial priorities, and I thought that Todd did a very thorough and careful job of establishing the priorities here in Minnesota at that time."

Doing more with less is a big challenge at the ATF. The inspector general at the Justice Department recently said the agency is failing to inspect gun shops every five years, mostly because it needs hundreds more investigators to do the job; the report suggested as many as 500 more people to do those inspections of licensed gun dealers.

The Senate Judiciary Committee hasn't yet scheduled a hearing on Jones' nomination, but two Democratic sources said it could move ahead with one in late May.