Accessibility links
Immigration Measure Faces Test In Senate, Rival Bill In House : It's All Politics The immigration overhaul proposed by a bipartisan group of senators has been passed out of committee and will soon be brought before the Democratic-led Senate. Less clear, though, is where the issue is headed in the GOP-controlled House, where another bipartisan group is at work on its own bill. A bill proposed by the Senate's Gang of Eight (from left, Jeff Flake, R-Ariz.; Marco Rubio, R-Fla.; Charles Schumer, D-N.Y.; John McCain, R-Ariz.; Lindsey Graham, R-S.C.; Bob Menendez, D-N.J.; Dick Durbin, D-Ill.; and Michael Bennet, D-Colo.) has passed out of committee and is headed for the full Senate. But the fate of the issue in the House is less clear. Alex Wong/Getty Images hide caption 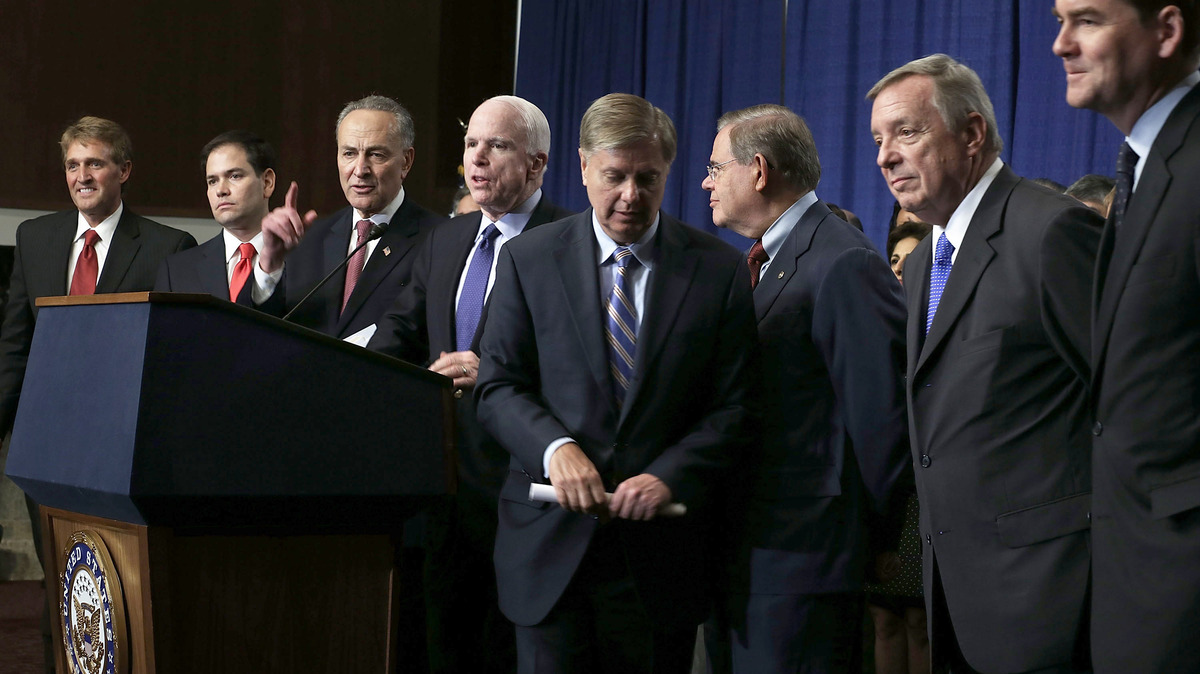 A bill proposed by the Senate's Gang of Eight (from left, Jeff Flake, R-Ariz.; Marco Rubio, R-Fla.; Charles Schumer, D-N.Y.; John McCain, R-Ariz.; Lindsey Graham, R-S.C.; Bob Menendez, D-N.J.; Dick Durbin, D-Ill.; and Michael Bennet, D-Colo.) has passed out of committee and is headed for the full Senate. But the fate of the issue in the House is less clear.

Members of Congress are back in their home states this week for a Memorial Day recess. It's a chance to talk with constituents about what could become the year's biggest legislative story: the push on Capitol Hill to fix what Democrats and Republicans alike agree is a broken immigration system.

A bill proposed by the Gang of Eight, a bipartisan group of senators, to revamp the nation's immigration rules passed out of committee last week and will soon be brought before the Democratic-led Senate. Less clear, though, is where the issue is headed in the GOP-controlled House.

The Senate chamber lately has become an even more partisan battlefield than usual, with verbal fights breaking out daily over stalled presidential nominations and a budget stuck in limbo. Majority Leader Harry Reid, D-Nev., is threatening to rewrite the Senate's filibuster rules to break the logjam.

That would infuriate the Republican minority and possibly doom any chance of bipartisan cooperation. But Reid says he's putting all that off until the Senate finishes the immigration overhaul — the one thing Democrats and Republicans do seem able to work on together.

"I'm going to do nothing to interfere with immigration," Reid says. "It is important for our country, and I admire the bipartisan nature of what happened with the Gang of Eight. It's exemplary of what we should do around here on everything."

But fierce opponents of the immigration bill's promised path to citizenship for 11 million unauthorized immigrants are preparing a series of poison-pill amendments. Leading that effort is Sen. Jeff Sessions, R-Ala., whose amendments almost all failed in committee.

"I think they would have a considerably better chance of passing on the floor than in the Judiciary Committee," Sessions says.

One amendment that had been proposed by Judiciary Committee Chairman Patrick Leahy, D-Vt., may not be brought up. It would give gay Americans the same right as everyone else to sponsor foreign-born spouses for green cards. Democrats fear it could prove as divisive in the full Senate as it did in the Judiciary Committee, where ultimately it was withheld.

Sen. Dianne Feinstein, D-Calif., is a strong supporter of gay rights, but she says she does not want that amendment revived.

"I want to see an immigration bill," she says. "We will lose all kinds of Republican votes if that's in the bill."

Gang of Eight leader Charles Schumer, D-N.Y., says he thinks many Republicans eager to improve their party's standing with Latino voters want to back his group's bill.

"My hope would be we could pass the Senate bill with a large number of votes, and the House would take it up," he says.

But House Speaker John Boehner, R-Ohio, insists his chamber won't simply take up and pass whatever the Senate sends over.

One option would be to consider a series of more conservative immigration measures being worked up by the House Judiciary Committee. But the House also has its own bipartisan group of eight trying to forge comprehensive immigration legislation.

One of its members is California's Xavier Becerra, the House's fourth-ranking Democrat.

That may be an understatement.

"It's a very different bill than the Senate bill," says Rep. Raul Labrador, R-Idaho, another member of the House's group of eight. One big difference, he notes, is how his group's yet-to-be-released proposal deals with the 11 million immigrants in the United States illegally.

"There is not a special pathway to citizenship, but anybody who can be legalized has an ability to become a citizen of the United States," Labrador says.

Labrador says the group has finally settled its differences and hopes to have a bill others can look at soon. But Rep. Raul Grijalva, D-Ariz., doubts such legislation would remain intact.

"What I'm concerned about is the amendments that'll be tacked on to any piece of legislation that comes out of the House," Grijalva says. "Not only poison pills, but things that'll derail, break it up into pieces — all as part of a stalling and delaying tactic."

It would be much better, Grijalva says, if the House simply took up the Senate's immigration bill. Fellow Arizonan John McCain, a Republican member of the Gang of Eight senators, agrees.

"I'm still optimistic we will get this through the House and Senate," McCain says.

Just how that would happen, though, no one can say.