Accessibility links
Obama Presses Congress On Student Loan Rates : It's All Politics Interest rates on government-backed college loans are set to double July 1 — unless Congress agrees on a fix before then. The president is expected to urge Congress on Friday to block that increase. 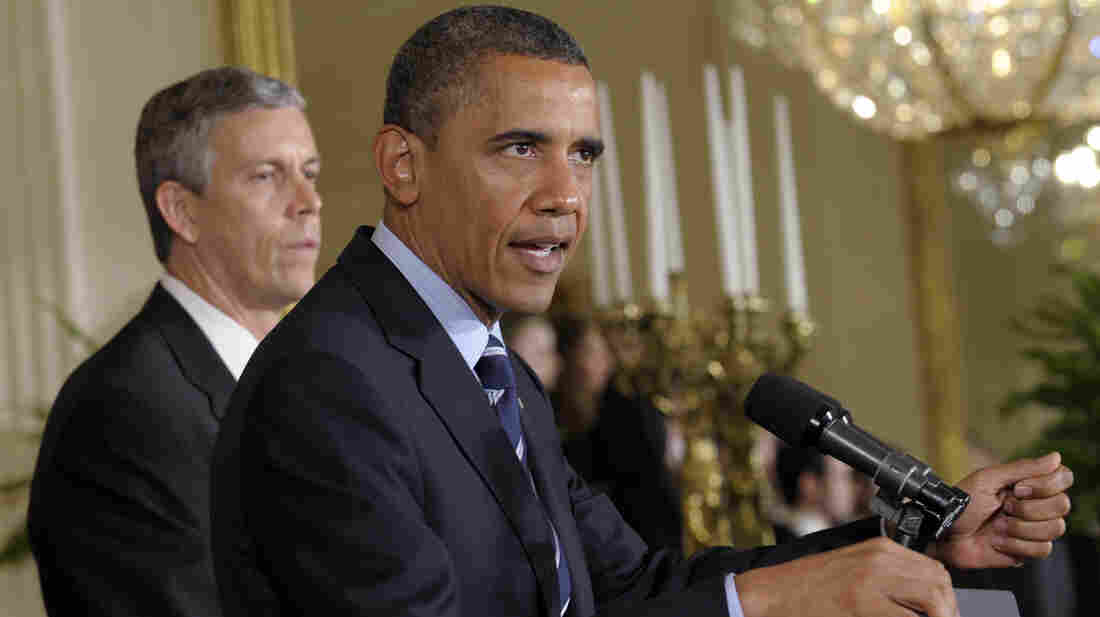 President Obama, with Education Secretary Arne Duncan at his side, calls on Congress on June 21, 2012, to stop interest rates on student loans from doubling. He is going to make that appeal again Friday. Susan Walsh/AP hide caption 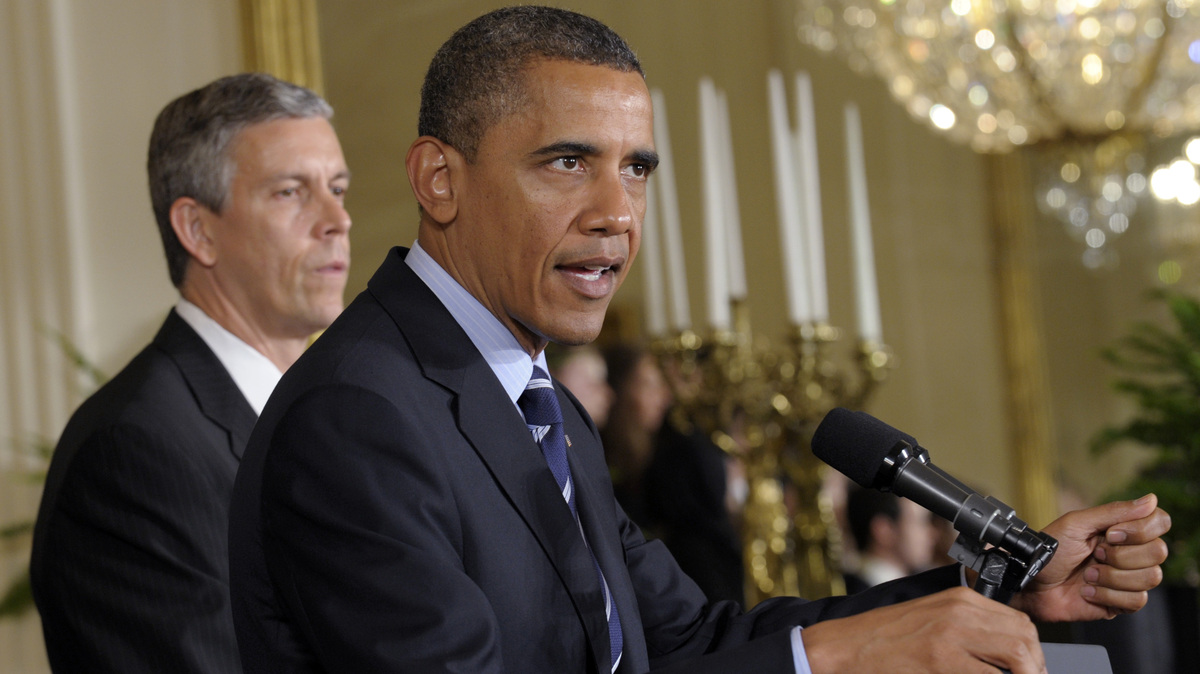 President Obama, with Education Secretary Arne Duncan at his side, calls on Congress on June 21, 2012, to stop interest rates on student loans from doubling. He is going to make that appeal again Friday.

President Obama surrounded himself with college students at the White House on Friday and warned that the cost of student loans is about to go up.

Interest rates on government-backed college loans are set to double July 1 — unless Congress agrees on a fix before then. Obama has threatened to veto a House-passed bill that would let the cost of student loans go up and down with the market.

If the alarm bells over rising student loan rates sound familiar, that's because the same thing happened last year. Back then, the president went on a barnstorming tour of college campuses, warning that a doubling of interest rates would cost the average student borrower $1,000 for each year of college over the life of his loan.

Eventually, Congress agreed to keep rates where they were — at 3.4 percent for one more year. That year is almost up, and students again face the prospect of rates doubling to 6.8 percent July 1. Obama is urging Congress on Friday to block that increase.

Tobin Van Ostern, who's with the campus arm of the left-leaning Center for American Progress, says students will make the case themselves when they descend on Washington, D.C., next week.

"All day, we'll have people going in and out of Congress buildings, meeting with senators and bringing their personal stories and experiences directly to those who have the ability to keep interest rates low," he says.

Van Ostern says lawmakers do seem to have learned a lesson from last year's showdown. No one is eager to see rates double overnight.

"Everyone seems to be in agreement that we need to do something about student loan interest rates to keep them low and affordable for borrowers," he says.

The president and congressional Republicans have offered different plans to do that, though they both start the same way: tying rates on student loans to the interest on a 10-year Treasury note. That rate is expected to be about 2.5 percent next year, climbing to just over 5 percent in 2018.

Under the GOP plan, a student who borrows money next year could see his interest rate rise every year after that, like an adjustable mortgage. In contrast, the president's plan would let students lock in rates for the life of their loan.

"It simplifies the math they need to do when they're considering going to college," she says.

On the other hand, Akers gives the Republicans credit for setting an upper limit on interest rates of 8.5 percent. There's no such cap in the president's plan.

"I do think that a cap makes sense, because in a period of economic expansion, where we do have interest rates rising rapidly, we wouldn't want to see less college-going among students who are on the margin of being able to afford to go to college," she says.

Lower-income students would continue to get a break under the president's plan, with interest rates 2 percentage points lower than what others are paying. Under the GOP plan, Van Ostern of the Center for American Progress notes, all students would pay the same rate.

"In reality, that ends up meaning that lower-income folks pay a little bit more, and then it will save people who are middle- or upper-income folks some money," he says.

Compared to some other fights in Washington, these differences don't seem insurmountable. But unless lawmakers and the White House can agree on the details quickly, Van Ostern says, another temporary stopgap measure may be necessary.

"If we can't come up with a long-term plan by then [July 1], and time is ticking, then we certainly need to at least pass a short-term extension of current interest rates to give folks in Congress more time to figure out how to deal with it long term," he says.

The whole idea behind the switch to market rates is to take some of the politics out of the student loan business. For now, though, it's clear that politics is still standing in the way.