Accessibility links
Oklahoma Recovery Spotlights Rep. Cole's Support For Sandy Aid : It's All Politics When Congress voted on federal relief for the victims of Hurricane Sandy, five of the seven Oklahoma representatives and senators voted no. Rep. Tom Cole, who voted yes, warned that someday Oklahoma would be asking for help. That day came last week after a massive tornado hit his district. 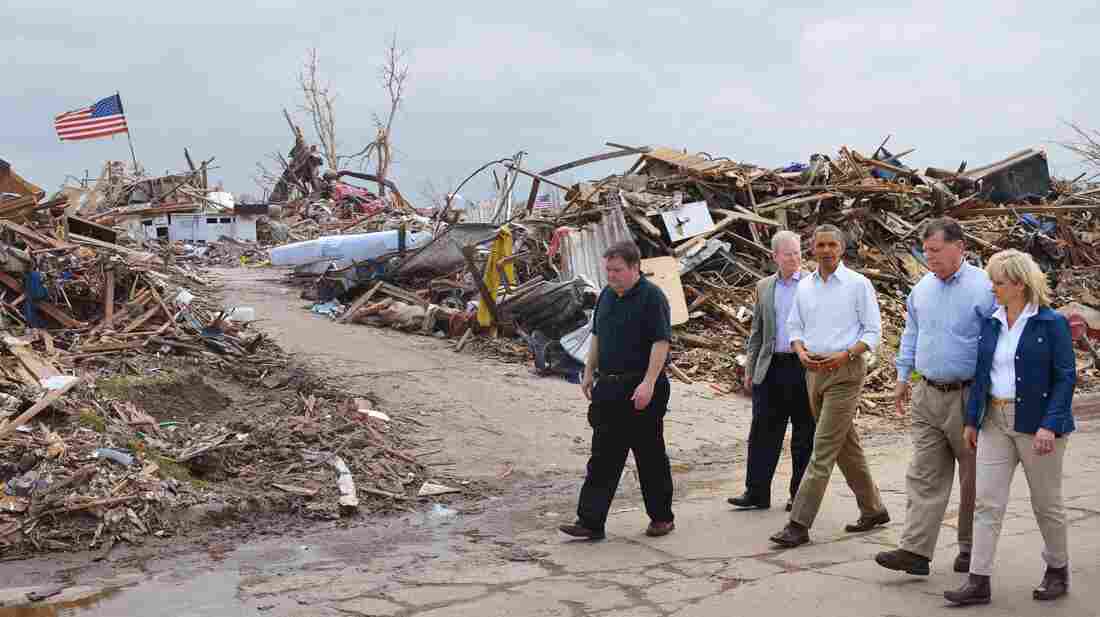 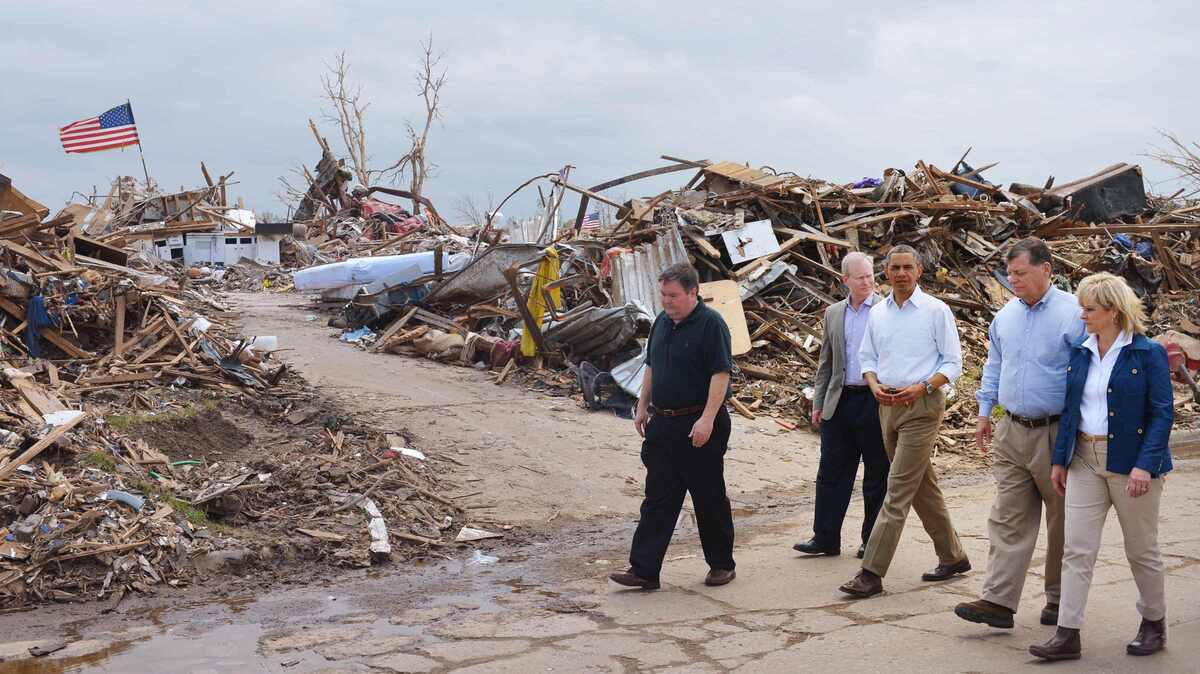 When Congress voted on federal relief for the victims of Hurricane Sandy in New York and New Jersey earlier this year, five of the seven Oklahoma representatives and senators voted no. Rep. Tom Cole, one of the two who voted yes, warned that someday Oklahoma would be asking for help — and that day came last week after a massive tornado.

The storm ripped through the city of Moore, in Cole's home district, killing 24 people and destroying thousands of homes.

Usually when he holds a town hall meeting back in his district, Cole starts off with a quick update on what's happening in Washington, D.C. But as he stood at the front of an auditorium in the town of Ada on Thursday, the homefront was very much on his mind.

"I've lived there for 53 years," Cole said. "These are all neighborhoods I know and friends' businesses that are gone."

His neighborhood dry cleaner was wiped out. The school where he worked as a groundskeeper when he was in college was destroyed. "So that's been pretty dominant for me, as you can imagine," he said. "Now let's talk about Washington, D.C."

One of the first accomplishments Cole mentioned was helping to pass the disaster aid bill for the areas affected by Hurricane Sandy. Cole argued in favor of the bill on the House floor.

"Each member ought to recognize" that at some point his or her area "will be hit by some disaster, and they will be here seeking support," he said.

Most House Republicans voted against the aid for Hurricane Sandy; five of the seven members of the Oklahoma congressional delegation voted no. They objected to spending unrelated to the hurricane in the bill — that, and its adding to the deficit.

"It's about priorities," said Tom Coburn, Oklahoma's junior senator, who was outspoken in his opposition to the bill. He's a Republican, as is every other member of Congress from the only state where every county voted against Barack Obama.

"We don't have the courage to actually go through and make hard choices about what works and what doesn't, what's a priority and what is not," Coburn said.

As it turns out, money added to the disaster relief fund as part of the Sandy bill is now helping people in Moore, Okla. Rep. Cole had no way of knowing that last winter when he argued in favor of the bill. But now, as a result, it probably won't be necessary to enact a fresh disaster funding bill for the devastation in Moore.

"We're not going to have that problem because we're operating out of already appropriated funds, thanks to — guess what — the generosity of the American people," Cole said.

But even in Moore, some still question whether Cole's vote was the right choice. 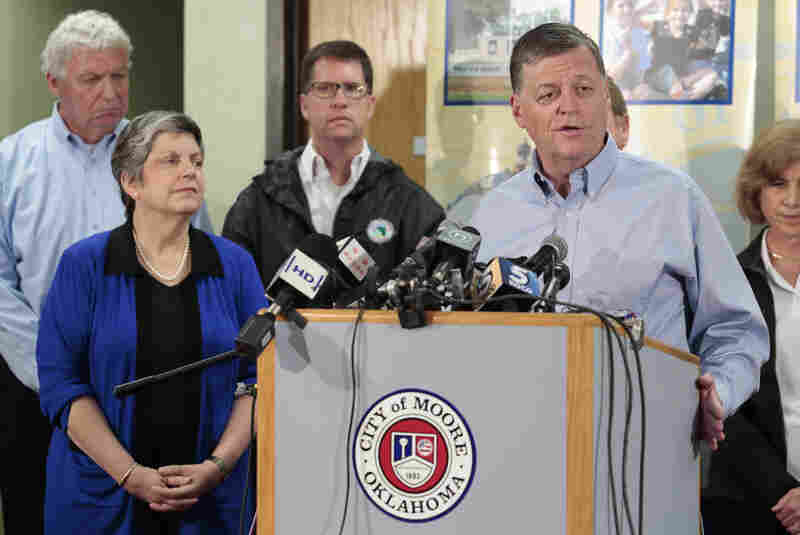 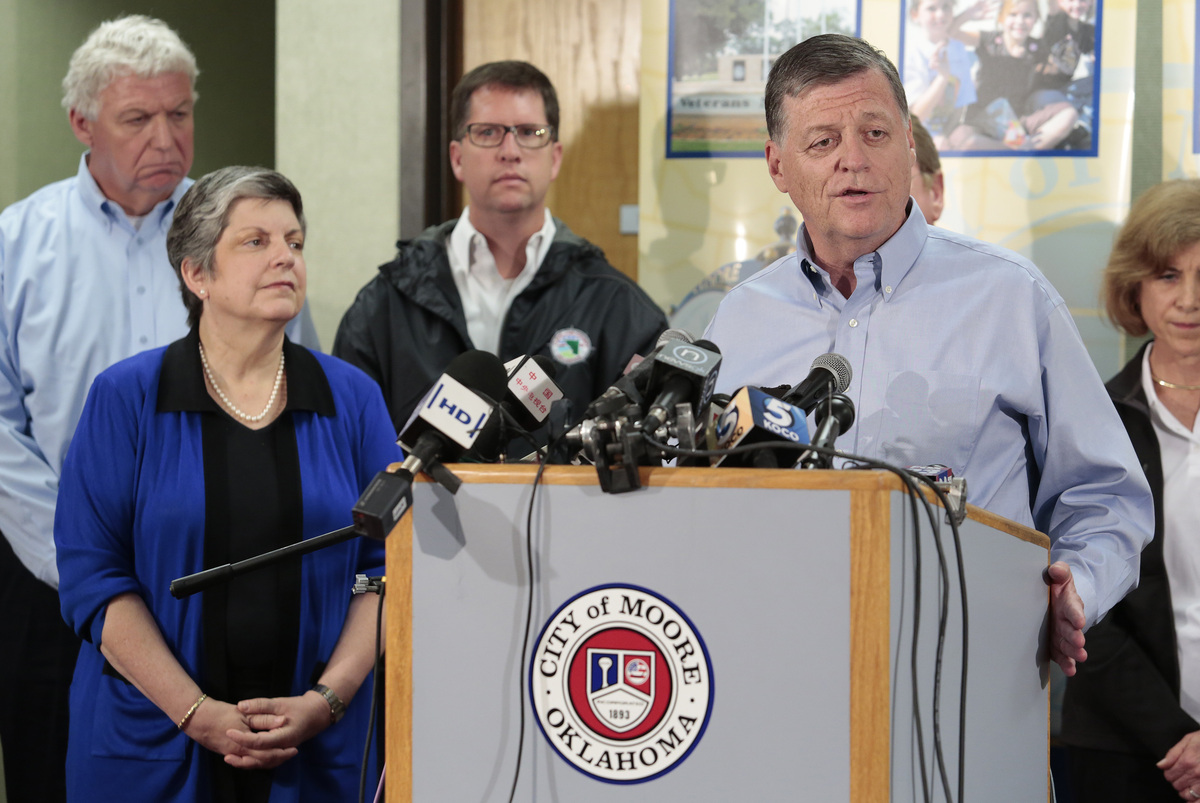 Rep. Cole speaks as U.S. Secretary of Homeland Security Janet Napolitano and others listen during a news conference in Moore last week.

At a restaurant called Sunny Side Up, a group of men, all members of the First Baptist Church, have gathered for breakfast.

Ken Webster came away from the tornado unscathed. But it was close.

"I'm right across the street from the school that got hit. I'm four houses away," he said.

Churches and private citizens have stepped in to help, but if government aid really is needed, those funds should be cut from somewhere else in the budget, he said.

"I think federal aid should be offset. We need to balance our budget," he said.

Webster is a big fan of Tom Cole and seems a bit surprised that his congressman voted for the Sandy aid bill. He questions whether Cole might have second thoughts about the vote now, but then he said, "Hey, you know, I think that Tom Cole can make his little mistakes and I'll still forgive him."

Cole stands by his vote. As he sees it, with divided government, any bill that passes the Republican House and the Democratic Senate and gets a signature from the president is going to require some compromise.

"I actually think people are much more reasonable than politicians sometimes. And if you'll come back and explain the issue to them, they usually understand. And that's fine. That's what politics is all about," he said.

And sometimes something comes along that transcends politics — like what happened in Moore.