Accessibility links
Ted Cruz: 'The New Voice' Of The GOP? : It's All Politics Tea Party favorite Ted Cruz, a freshman senator from Texas, has seen his star rise in recent months. His appearances at events like a big New York City fundraiser this week are fueling speculation about a presidential bid in 2016 — a move he's not ruling out. 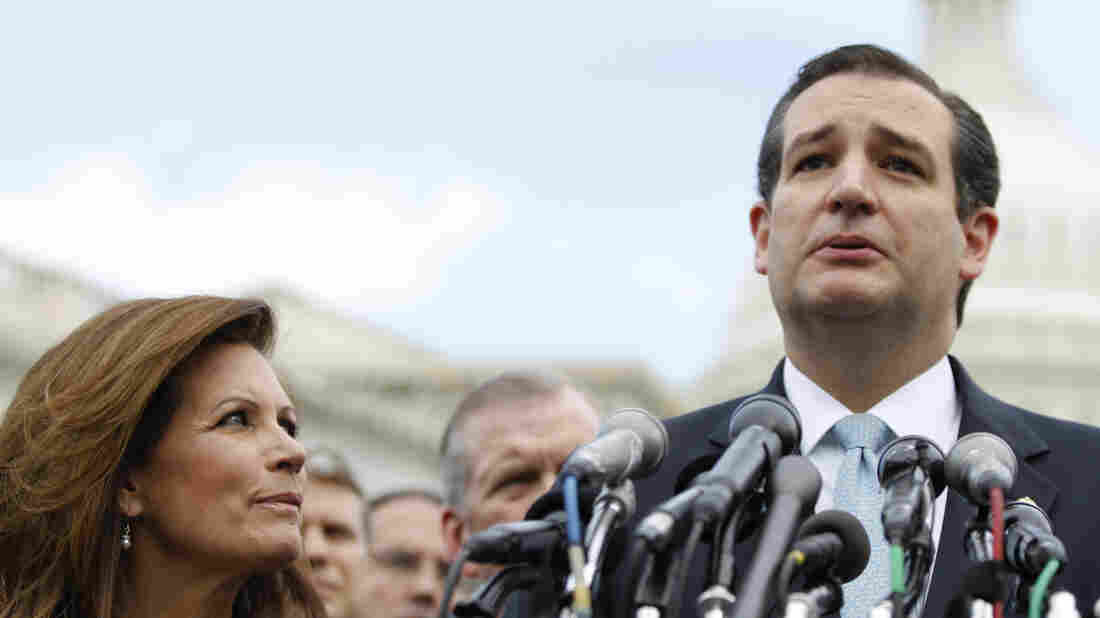 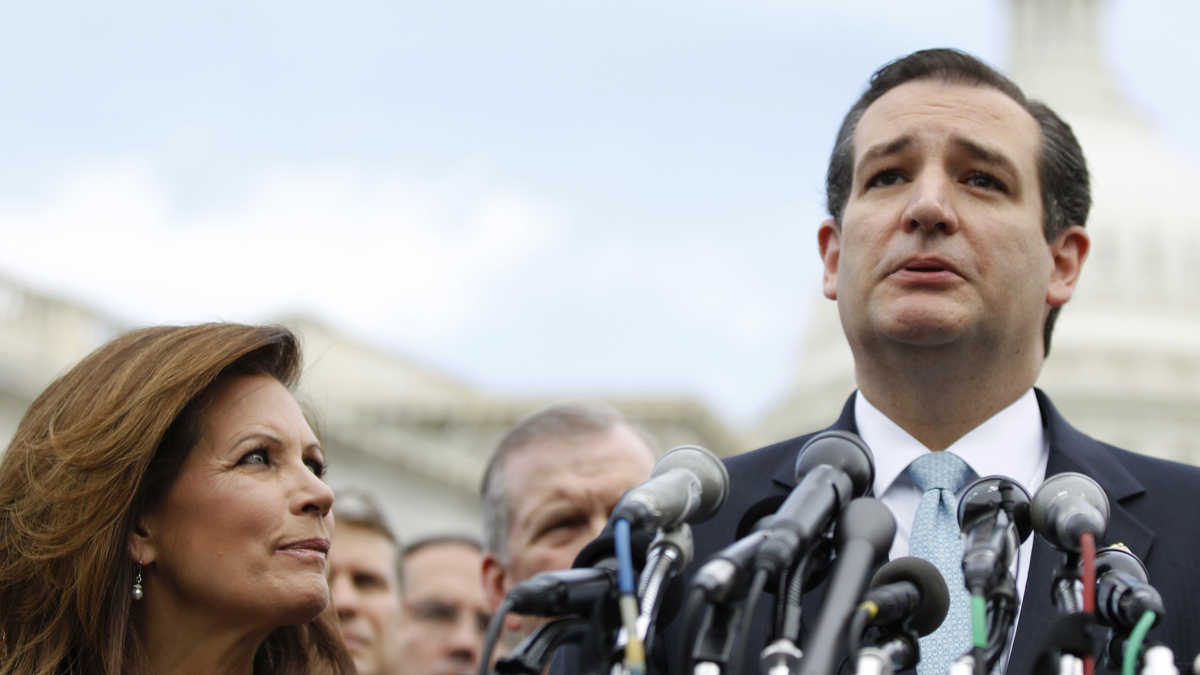 On the same day this week that House Tea Party Caucus co-founder Michele Bachmann, R-Minn., announced she won't seek re-election, the fortunes of another Tea Party favorite continued to soar.

Freshman GOP Sen. Ted Cruz of Texas headlined a big fundraiser thrown by the New York Republican Party in the heart of Manhattan. More than 600 Republicans gathered to write checks to their struggling party, which has no statewide officeholders.

But it was not exactly a welcoming committee that awaited Cruz outside the Grand Hyatt hotel.

"I think it's really ridiculous, all these people coming to New York to raise money when their voting records are really diametrically opposed to what New Yorkers want — and what the American people want — when it comes to gun safety," said Leah Gunn Barrett, executive director of New Yorkers Against Gun Violence. 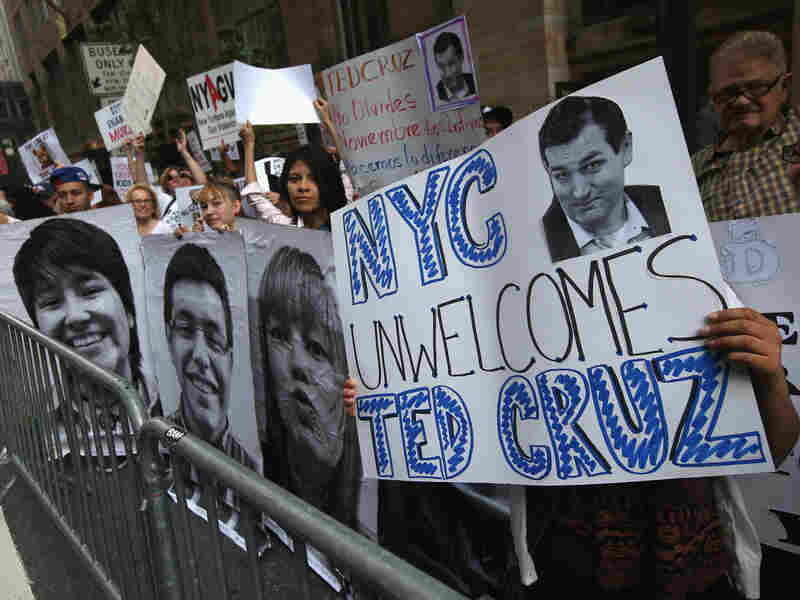 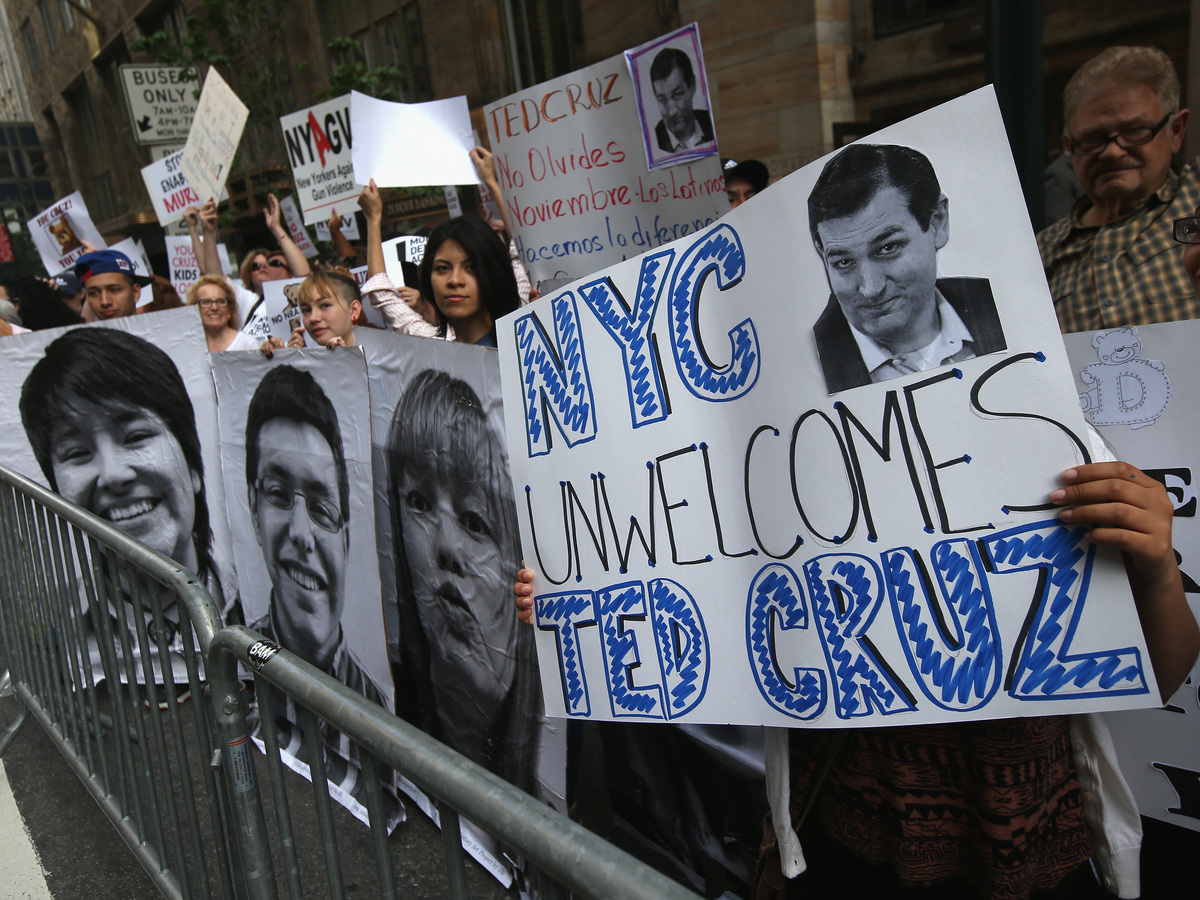 Others protested Cruz's efforts to block the pathway to citizenship promised to millions of immigrants who are in the United States illegally in the Senate's bipartisan immigration bill.

Ramiro Luna, a Dallas college student originally from Mexico, said his family entered the U.S. illegally when he was a child.

"I flew in from Texas yesterday just to come and protest against Ted Cruz," he said. "We're not afraid of him. We're going to chase him wherever he goes and let him know that the immigrant community exists and that we have a voice."

But inside the fundraiser, Jim Castro-Blanco, a lawyer, said he was happy to have Cruz, the Canadian-born son of a Cuban immigrant, headlining the fundraiser.

"He's been a very, very articulate and powerful speaker for the Republican Party," Castro-Blanco said. "As a Latino, it's very heartening for me to see somebody out of Texas come to New York and really be the voice of the conservative Republicans in this state."

Not all those Republicans were happy, though, about this Tea Party hard-liner who voted against federal emergency aid for victims of Hurricane Sandy. Reps. Peter King and Michael Grimm boycotted the fundraiser.

Later, taking the stage in black cowboy boots, Cruz showed he could also be a crowd-pleaser. "It is great to be with so many friends here in New York City," he said.

Pacing the stage like a revival preacher and speaking without notes, Cruz made no mention of guns, the Sandy aid or the immigration bill. Instead, he performed a political postmortem.

"I'm going to suggest the last election can be explained in two words: 47 percent," he said.

Those words, uttered by GOP presidential candidate Mitt Romney, created the wrong narrative, Cruz said. Much better, he said, was Romney's line, "You built that."

It's what Cruz called "opportunity conservatism" — reaching out to low-income voters with a free-market message. And it's one being brought, he added, by a new kind of Republican.

And, someone yelled out, "Ted Cruz!" Cruz just nodded and chuckled.

"We ... had a huge success with Cruz there," he said. "I think people are looking for the new voice of the Republican Party, and Ted Cruz is obviously offering one of those alternative voices."

It's a voice being heard in more and more places, and it's fueling speculation about a Cruz presidential bid in 2016. Cruz has said before he would be eligible to be president — and he hasn't ruled out a run.