Accessibility links
White House-Issa Fight: Nasty But Normal In Washington : It's All Politics It's what happens when one party holds the White House and the other at least one congressional chamber. Subpoenas are launched like rockets at an enemy camp. 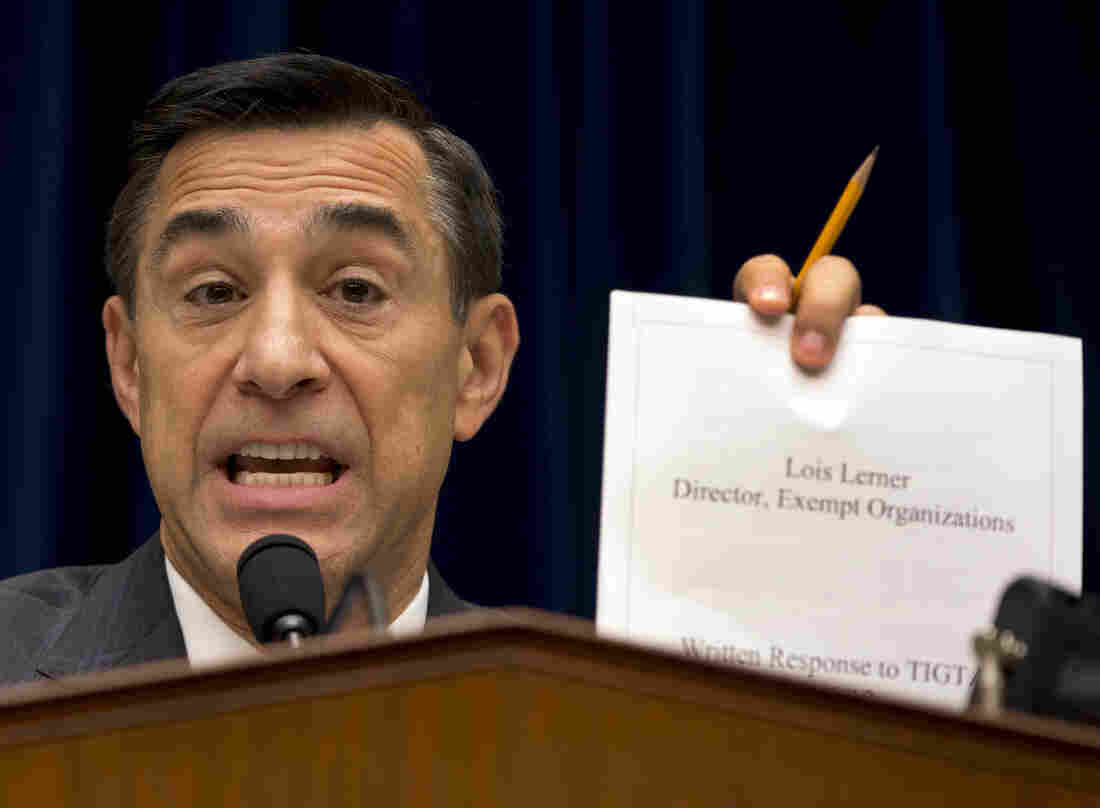 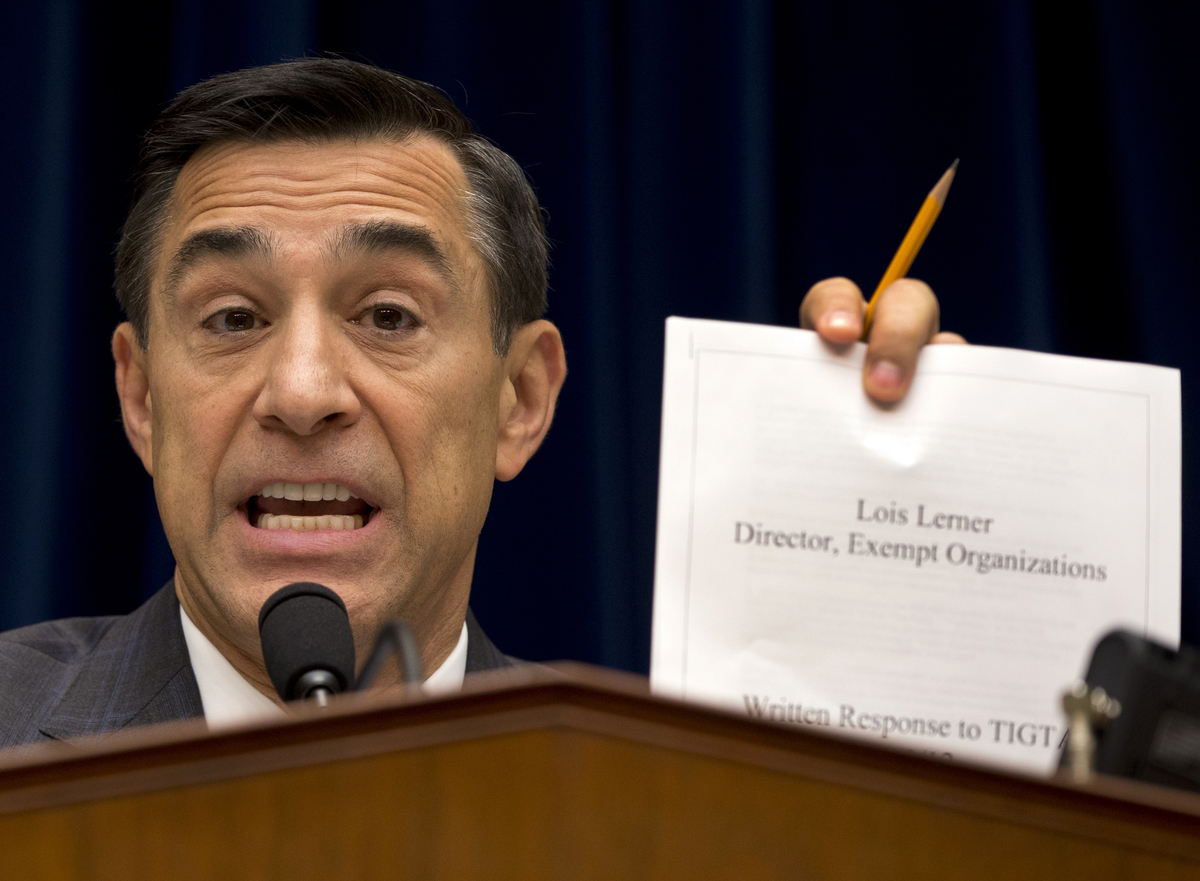 Rep. Darrell Issa, R-Calif., chairman of the House Oversight and Reform Committee, is just doing what Congress does at times of divided government.

Anyone searching for the place where the friction between the Obama White House and congressional Republicans is throwing off the most angry sparks need look no further than the clashes between the administration and Rep. Darrell Issa.

How's this for angry? In an interview Sunday on CNN, Issa, a California Republican who is chairman of the House Oversight and Reform Committee, called White House press secretary Jay Carney Obama's "paid liar." Issa was expressing doubt about Carney's assertion that administration officials weren't behind the IRS's targeting for greater scrutiny conservative groups applying for tax-exempt status. For the record, a Treasury Department inspector general found no evidence of involvement by anyone outside the IRS.

Obama partisan David Plouffe retaliated, fighting Issa's unproven charge with his own unproven charges. The former Obama White House political strategist tweeted allusions about alleged criminal behavior on Issa's part. For the record, Issa hasn't been convicted of any of the acts to which Plouffe alluded.

For his part, Carney declined when given a chance Monday to join the mudslinging.

"I'm not going to get into a back-and-forth with Chairman Issa," he said.

Actually, going back and forth with charges and countercharges is precisely what happens during times of divided government; one party holds the White House and the other controls at least one congressional chamber and is able to start oversight investigations, launching subpoenas like rockets at an enemy camp.

The exact height to which the vitriolic rhetoric rises may vary, but it's fairly certain in the current polarized atmosphere that congressional oversight can become a very caustic affair for a president of the opposite party whose people often respond in kind.

Issa may be a thorn in the side of Obama with his probes into the IRS, the Benghazi terrorist attacks and the Justice Department's "Fast and Furious" gun-running snafu. But he's probably no more or less of one than his Democratic predecessor and fellow Californian, Democratic Rep. Henry Waxman, was to President George W. Bush in his investigations into the Iraq War. Or former Republican Rep. Dan Burton of Indiana was to President Clinton in the 1990s with his investigations into Democratic fundraising.

Incidentally, anyone who thinks Issa's attacks on the Obama administration have gone too far may want to recall Burton. That former chairman of the House oversight committee fired a handgun at a watermelon in an attempt to show that Clinton White House lawyer Vince Foster's death in a secluded Northern Virginia park was a murder the Clintons were allegedly covering up, not a suicide.

"We have a Democratic president facing a Republican House," said David Parker, a political scientist at Montana State University.

Parker and fellow scholar Matthew Dull of Virginia Tech have studied and written about congressional investigations during times of divided government. A 2009 paper was updated last year.

"The one thing that's happened, certainly starting in '74 on, is that congressional investigations in general and oversight in general have become much more heavily politicized," Parker said. "I'm not saying that the allegations made in the various investigations that Issa has undertaken are completely baseless, not at all.

"But, there is an incentive now, a party incentive, to use this platform to try to find out as much as you can to exploit it for partisan gain. Because what you're doing is tarnishing the brand of the party that controls the Senate and the presidency. So what you see in divided government is that the investigations are longer and more intensive, and in unified government they tend to be less intensive and more quick."

Parker notes that the House oversight committee is, by its nature, meant to dig into how well or poorly the government is functioning. Thus, the disinclination of a Congress controlled by the same party as the president to do penetrating oversight may actually, in the end, be more dangerous to American democracy than the partisan-fueled oversight.

Still, no doubt there is a potential downside to the kind of oversight House Republicans are now asserting over the Democratic administration.

"These are ultimately damaging because what they do is turn the public further off of politics in general," Parker said.

But Americans already turned off by the rancorous House investigations they've seen to date may want to gird themselves. If Obama's approval ratings drop significantly, Parker said, expect more "sharks in the water" in the form of even more House investigations of the administration.