Accessibility links
The Best Way To Scare A Politician : It's All Politics Once rare, recall elections are becoming increasingly common. It's not that politicians are markedly more crooked than in the past. Rather, foes view recalls as a way to fight back against policies they don't like.

The Best Way To Scare A Politician

The Best Way To Scare A Politician 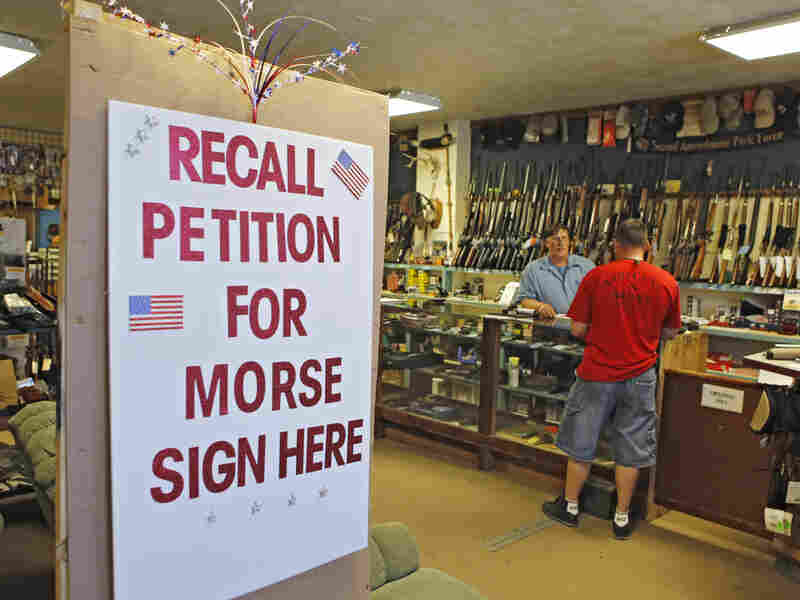 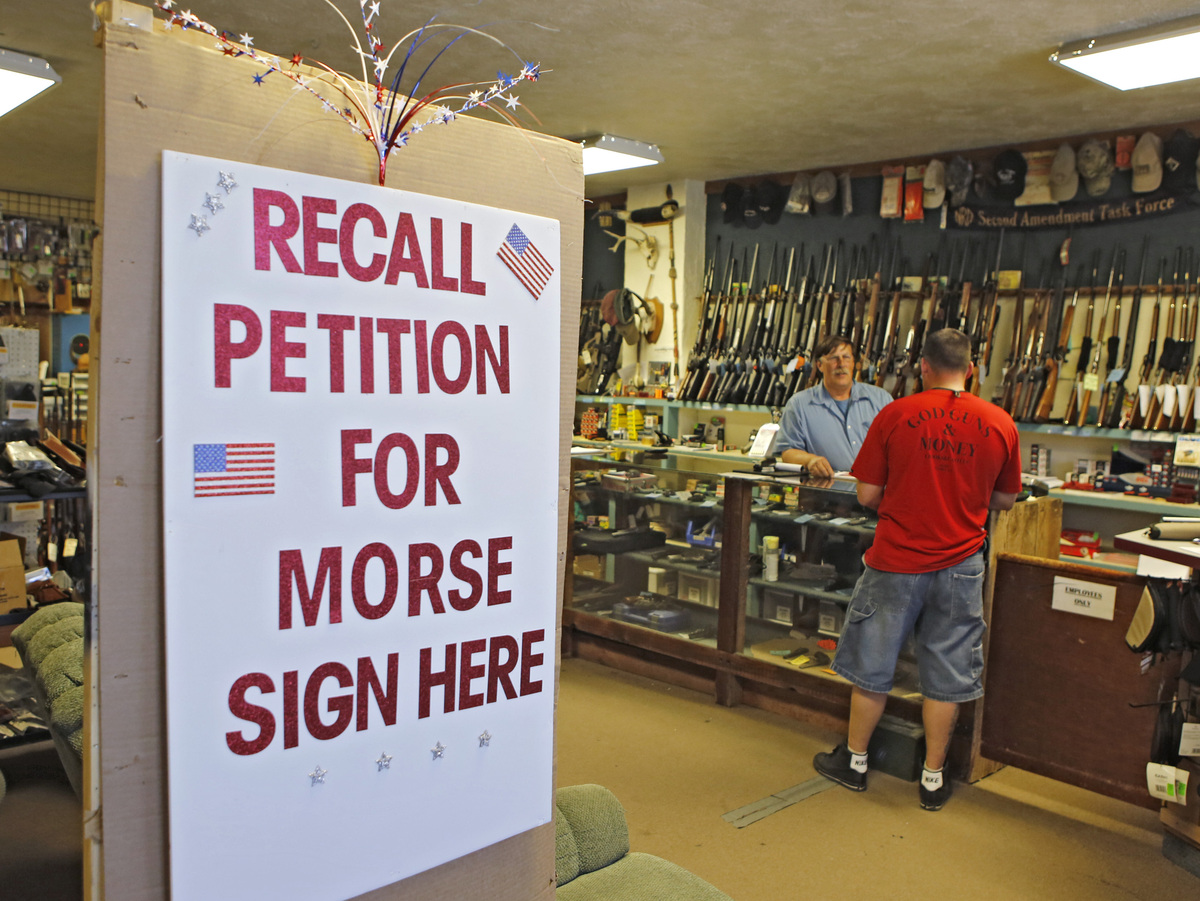 John Morse isn't bogged down in personal scandal. The Democratic president of the Colorado Senate isn't accused of ethical improprieties or anything else that might directly violate his oath of office.

But by pushing a sweeping gun-control measure he's alienated a swath of voters who are determined to toss him out of office before his term ends.

On Monday, groups opposing restrictions on guns turned in twice as many signatures as they needed to trigger a recall election against Morse. A recall of another state senator appears likely.

It's the latest example of an elected official facing recall not because of criminal misconduct, but simply because their opponents disagree with their policy choices.

"Waiting for the next election would still give them another year to trample freedom with anti-constitutional bills pushed by an extremist minority," says Anthony Garcia, spokesman for the lead group seeking Morse's ouster. "We appealed to people's common sense and found that many wanted action now, both to simply remove him and to send a message to the Legislature here."

Seth Masket, a political scientist at the University of Denver, has done research suggesting that legislators do, in fact, change their ways when they realize they might face a recall.

But while the recall might be seen as the ultimate way voters have of keeping politicians accountable, others say its recent growth is symptomatic of a polarized era.

In Colorado last year, there were eight recall votes, according to the authoritative Recall Elections blog. Although six of the officials survived, two were removed and two other officials had resigned in the face of recall threats. Across the nation, the blog reported, there were at least 168 recall elections in 93 different jurisdictions in 2012, compared to 151 recalls the year before.

"In some ways, it seems like a natural progression, in which any rare political tool that can be routinely used eventually will be, [as with] the filibuster and the debt-ceiling vote," Masket says.

Available In Most States

Citizens can recall state officials in 19 states, while local officials can be recalled in at least 29 states, according to the National Conference of State Legislatures.

Recalls have been around for about a century, introduced as part of the same wave of Progressive Era changes that also ushered in ballot initiatives. But they were rarely used, until the past decade.

Back in 2003, California voters recalled Democratic Gov. Gray Davis, replacing him with Republican Arnold Schwarzenegger. The first gubernatorial recall since 1921, it had what political scientists call a demonstration effect — alerting activists to the potential usefulness of the recall as a tool against their enemies.

One year ago this week, Republican Gov. Scott Walker of Wisconsin survived a recall effort triggered by his successful effort to curb collective bargaining rights for most public employees in the state. It was, on a per capita basis, one of the most expensive elections in U.S. history.

It was part of a wave of recall elections in the state, involving the lieutenant governor and numerous state senators, that generated campaign spending in excess of $135 million.

"There is a pretty strong sense in this state, even among liberals who don't like Walker, that the recall is unfair," says Jay Heck, executive director of Common Cause in Wisconsin. "You're elected for four years and I can't vote against you in the middle."

Attempts to recall local officials have become so common nationwide that last year the U.S. Conference of Mayors released a mini-documentary about the phenomenon called "Recall Fever."

"With a recall, absent a felony, you wait until the next damn election," says Mark Funkhouser, who survived four recall attempts during his single term as Kansas City mayor, which ended in 2011. Other mayors have been subject to serial ouster efforts in recent years.

"When decisions are made, that's the way democracy works," Funkhouser says. "Sometimes you win and sometimes you lose and we ought to move ahead."

Some local officials have been recalled due to corruption, but others have faced votes of no confidence because they raised taxes or decided to resurface a road.

On Tuesday, the city secretary in Lubbock, Texas, announced that organizers of a recall against City Councilman Victor Hernandez had turned in enough valid signatures to force an election.

Hernandez is nominally being targeted for interfering with the duties of the city manager and other staff and voting on the question of whether Lubbock should pay for his legal bills in the matter.

But his real offense may have been serving in public office for a long time and accumulating enemies, suggests Cindy Rugeley, a political scientist at Texas Tech University. The recall effort is being led by someone Hernandez once defeated for office.

"What this comes down to, and I think you'll find this to be the case in a lot of the local recalls, is a political battle between people in a particular city council district," Rugeley says.

Rugeley says that when recalls represent mere political opportunism, they overturn the will of the voters. Elected officials are so drained and distracted by even the threat of a recall that they're distracted from doing their jobs — or may duck tough issues to begin with.

"You can't do your job," says David Roberti, who survived a recall election triggered by a gun-control measure, as Democratic leader of the California Senate in 1994. "There are so many things I want to do, the pressure is to forget the thing that an aggressive organization is going to use to force a recall."

Not all recall efforts succeed. Even when they reach the ballot, many politicians have been able to turn the attacks to their advantage, wrapping themselves in the "cloak of martyrdom."

Democratic Sen. Dianne Feinstein's political star rose after a 1983 recall attempt against her as mayor of San Francisco — also occasioned by an effort to restrict gun ownership — backfired. She won 81 percent of the vote and was considered as her party's vice-presidential pick the following year.

Similarly, the recall effort against Walker helped raise his profile nationally. For all the controversy he generated, he's yet to draw a serious opponent for re-election next year. Some even view him as a presidential prospect for 2016.

Politics By Other Means

Recalls continue to retain value as a necessary device for getting rid for crooked or incompetent politicians. Illinois voters approved a recall law in 2010, after Democratic Gov. Rod Blagojevich refused to step down before his impeachment and eventual conviction for attempting to profit from Barack Obama's vacant Senate seat.

But recalls in general are becoming yet another way of practicing politics by other means. When officials are targeted for their policy positions, it only adds to the sense among the public that too little gets accomplished between ever more frequent elections — creating what some in Wisconsin considered to be "recall fatigue."

"Recalls, while they're something that were utilized widely in Wisconsin, are not something people want to revisit again anytime soon," says Heck, the Common Cause official.