Accessibility links
Boehner Seeks To Reassure House GOP On Immigration : It's All Politics House Speaker John Boehner strongly suggested he would abide by the Hastert rule on immigration legislation, meaning no floor vote unless a majority of House Republicans backed the bill. 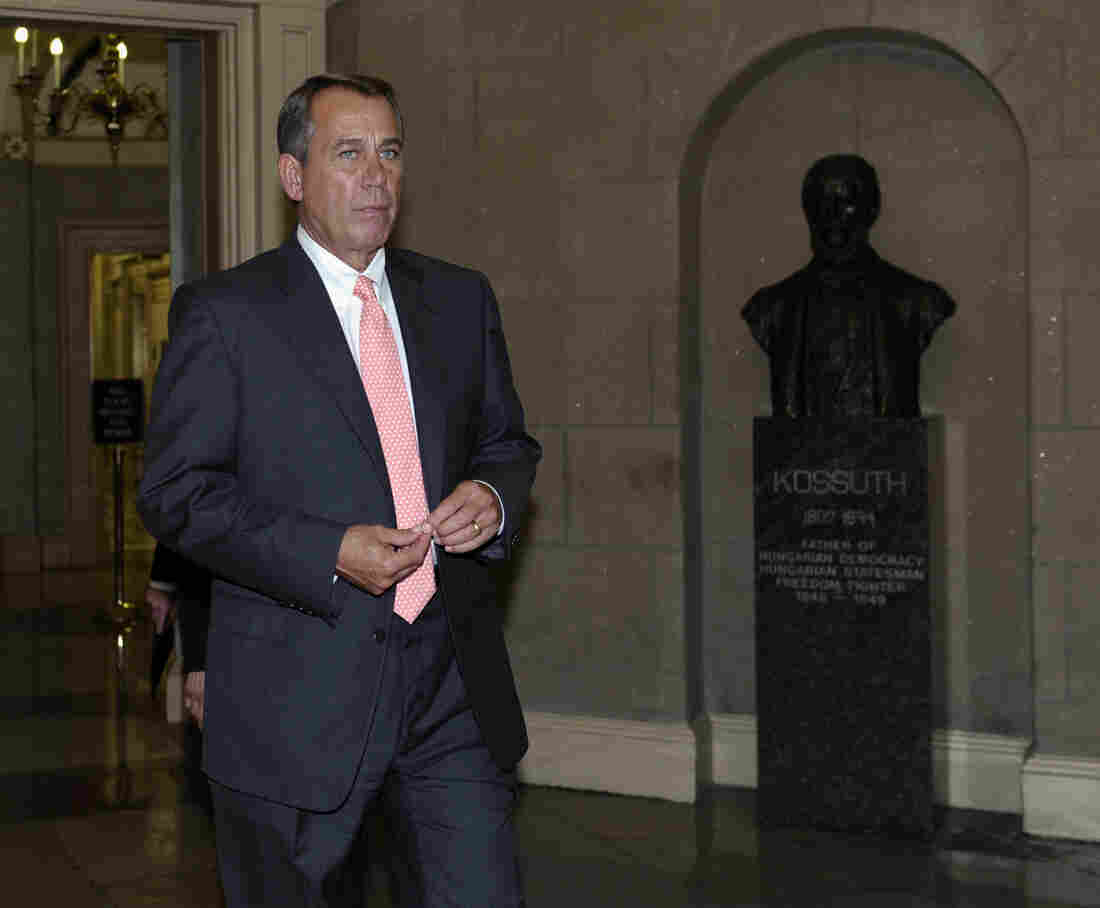 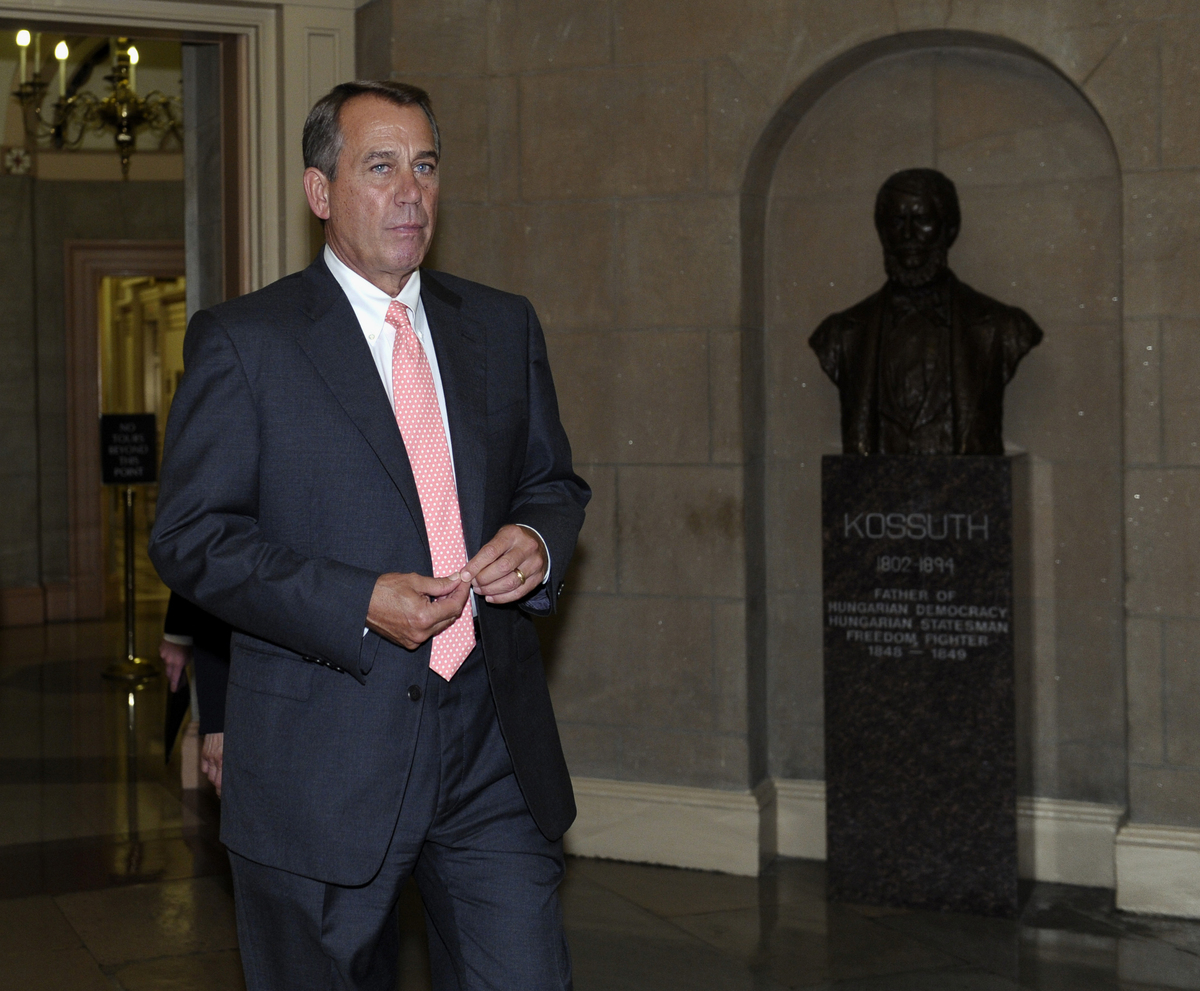 House Speaker John Boehner is getting flak from fellow Republicans over immigration legislation.

Faced with the threat of mutiny for what seems like the umpteenth time during his speakership, John Boehner moved to mollify fellow Republicans on Tuesday, saying immigration legislation would need the support of a majority of the House GOP before it could be brought to a floor vote.

After emerging from a meeting with House Republicans, following days of warnings by conservatives that the Ohio Republican had better not try to pass an immigration bill with mostly Democratic votes, Boehner sought to calm the roiling Republican waters.

"I also suggested to our members today that any immigration reform bill that is going to go into law ought to have a majority of both parties' support if we're really serious about making that happen," he told reporters waiting outside the meeting room. "And so I don't see any way of bringing an immigration bill to the floor that doesn't have majority support of Republicans."

The practice of bringing to a floor vote only legislation supported by a majority of the party is known as the Hastert rule. Denny Hastert, the Illinois Republican who was speaker from 1999 to 2007, mostly stuck to the practice of bringing to a vote only those bills with a "majority of the majority" supporting them. It was a good way to keep his political base in the House contented.

Boehner's words to the House GOP were meant to reassure Republicans opposed to provisions in the legislation the Senate is now considering — provisions that would create a citizenship pathway for people in the U.S. illegally.

In a clear shot across the bow of Boehner's speakership, Rep. Dana Rohrabacher of California said in an interview Monday that if the speaker let legislation reach the floor that a majority of House Republicans found objectionable, Boehner should be evicted from the speaker's office. Rohrabacher said:

That statement would be virtually impossible to spin, even in Washington, into anything less than a bald-faced threat.

In the past, Boehner has passed legislation most fellow House Republicans found odious, like the bill that averted the fiscal cliff. It passed in January with just 85 of 241 Republicans voting for it, causing the speaker to rely on nearly unified Democratic support for passage.

Comments he made in a recent ABC News interview caused the latest bout of concern among Republicans. The speaker described revising the nation's immigration laws as his "top priority." That led some in the GOP to surmise that he would do anything to get a bill passed, even one most of them didn't like.

There were at least two other things worth noting about Boehner's Tuesday comments. One, he prepared the ground for the argument that Democrats would be to blame if immigration legislation should fail in the House.

Some Senate and House Republicans have maintained that before they will vote for any legislation, they will need to be persuaded that it contains border controls that will need to demonstrate their effectiveness before before individuals now in the country illegally get the chance at citizenship. Democrats have generally balked at going as far on border-enforcement features. They've accused Republicans of trying to kill the legislation by creating insurmountable hurdles for it.

"... I just think the White House and Senate Democrats ought to get very serious. We know that border security is absolutely essential, that — if we're going to give people confidence that we can do the rest of what's being suggested. And I frankly think that the Senate bill is weak on border security. I think the internal enforcement mechanisms are weak and the triggers are almost laughable.

"And so if they're serious about getting an immigration bill finished, I think the president and Senate Democrats ought to reach out to their Democrat — Republican colleagues to build broad bipartisan support for the bill."

Secondly, Boehner didn't rule out the possibility that he could break the Hastert rule on a later immigration vote. If the House does actually somehow pass an immigration bill and the Senate does too, he seemed to say, who knows?

"We'll see when we get there," Boehner said.