Accessibility links
Meet The New Governor: Sharply Partisan And Upwardly Mobile : It's All Politics For years, governors were considered the most pragmatic figures in politics. Now, they're using their states to run ideological experiments. 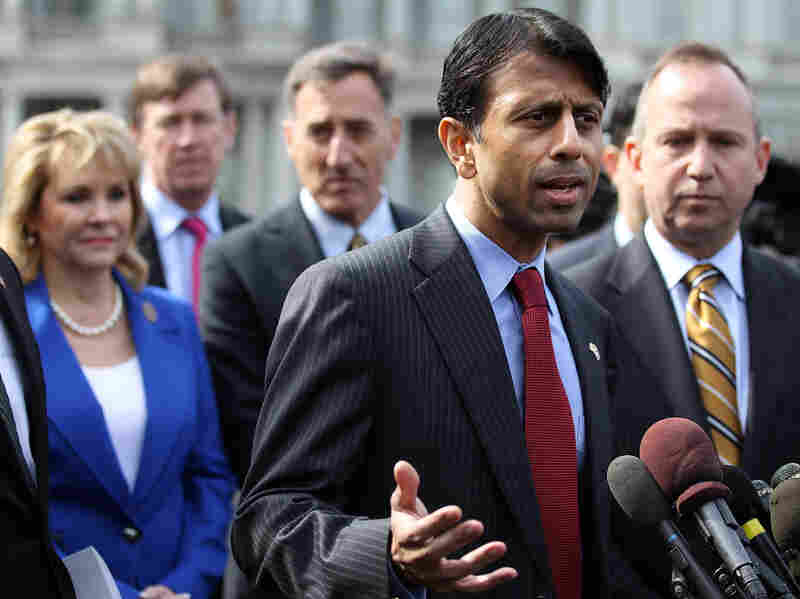 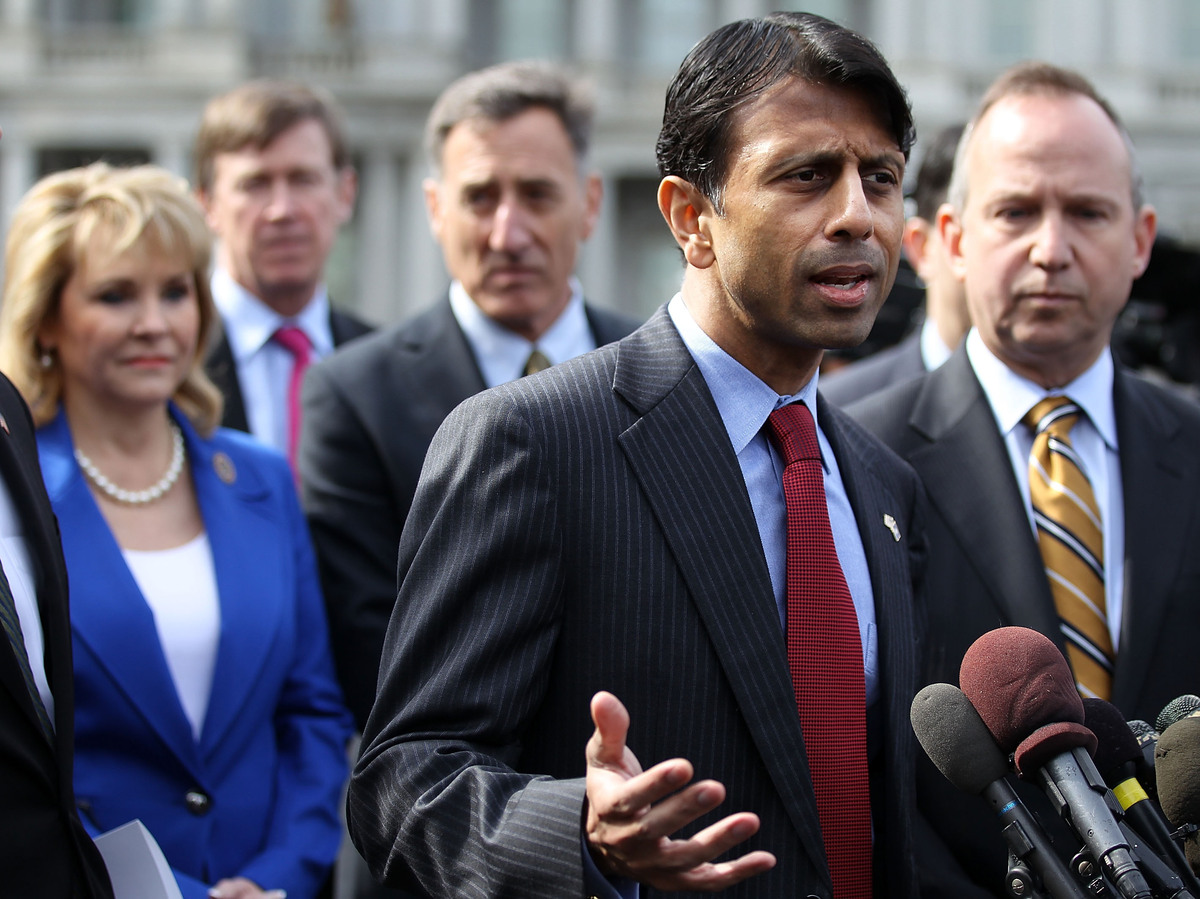 Republican Gov. Rick Scott, who is already executing prisoners faster than any Florida governor in modern times, signed a bill Monday designed to speed up the death penalty process.

Six weeks ago, Democratic Gov. Martin O'Malley moved in the opposite direction: He signed a bill abolishing the death penalty, making Maryland the sixth state to end capital punishment in as many years.

This kind of difference is not unusual. On taxes, gun control, abortion and a host of other issues, Democratic-controlled states are moving in entirely different directions from their Republican-led neighbors.

What is unusual is that governors are often the ones leading the way. Traditionally, governors have been among the least partisan figures in big-league American politics, concentrating less on ideology than the managerial tasks of paving roads and funding schools.

Today, whether fueled by their own presidential ambitions or pressured by interest groups that figure they can get more action in states than from a gridlocked Congress, governors have become more polarizing figures.

"There just seems to be more of a partisan edge," says Democratic Rep. Jim Matheson, whose father was a popular governor of Utah. "They seem to be infected along with everyone else, there's no question about it."

For decades, observers have talked about states as "laboratories of democracy," experimenting with ideas that often blossom into national policy.

Today, we have red labs and blue labs, with partisan governors pushing entirely different and opposite types of laws.

"The vast majority of states are deeply red or deeply blue, and they reflect that," says Larry Sabato, director of the University of Virginia's Center for Politics. "Governors used to be the most bipartisan group, but now they're as divided as everybody else."

Governors have always been highly political. Their control of state parties gave rise to the myth that they could help hand their states' electoral votes to presidential candidates.

But once campaign season was over, governors had trains to run. Many were willing to buck fashions in their own parties to balance their budgets or try to improve high school graduation rates.

"For them, compromise is part of governing," writes political scientist Alan Rosenthal in The Best Job in Politics, his recent book about governors.

The 50 governors saw themselves as belonging to a special breed — half the number of the U.S. Senate, the "world's most exclusive club," but with twice the accountability for solving problems.

They collaborated with neighbors on matters such as the environment, while borrowing ideas from colleagues around the country on an ad hoc basis or through the National Governors Association.

"Governors used to clearly learn from each other at NGA meetings and follow up on projects," says John Weingart, director of the Center on the American Governor at Rutgers University. "They'd send their staff to look at interesting things in other states, regardless of party."

Twenty years ago, NGA was considered one of the most powerful lobbying forces in Washington, speaking with the full authority of the most important politicians out in the country.

Today, with a more fractured group of governors, it's difficult for NGA to present a united front. Instead, the separate Democratic and Republican governors associations have become increasingly influential.

RGA raised $117 million for the 2010 campaign cycle, the last big year for gubernatorial elections, while DGA raised $55 million, according to the Center for Responsive Politics.

"The transition moved quickly when the Democratic and Republican governor groups started taking positions on controversial issues, and then sought to have the NGA reflect their views," says Dave Freudenthal, a former Democratic governor of Wyoming, citing matters such as climate change and the Affordable Care Act, President Obama's health care law.

Interest groups, stymied in Washington, have pushed governors to test-market ideas on everything from taxes to abortion.

Meanwhile, the internal politics of many states have grown more partisan, with one party or the other coming to completely dominate the legislature.

"It used to be, you'd run from one side or the other, but you were forced to govern more from the middle," says Ray Scheppach, a former NGA executive director. "Now, they do worry about primary challenges more, so it keeps them aligned in that partisan approach."

What would once have been seen as a no-brainer for governors — taking money from Washington — has become a bright dividing line. Many Republicans have objected on principle to accepting funds from the 2009 stimulus law or the Medicaid expansion at the heart of the Affordable Care Act.

There was a time when it was common for governors to please just about everyone, earning approval ratings in the 70s or 80s.

Scott Matheson, for instance, was one of the most popular governors in the country in the 1980s, even as a Democrat in Utah, in part because he worked well with Republicans such as Norman Bangerter, who served under him as state House speaker and succeeded him as governor.

That sort of model still exists, but it's more rare and doesn't bring with it national prominence.

Instead, stars are born by taking ownership of some issue that excites the national party base — such as Republican governors who have taken on public employees unions or talked about abolishing state income taxes, or Democrats banning so-called assault weapons and signing gay-marriage laws.

"Certainly those that want a national profile, they may well need to be partisan, just because of the way the nominating process works," says Bill Pound, executive director of the National Conference of State Legislatures. "They've got to get out and appeal to whatever base it is, on either side."

In this era, a figure such as popular Republican Gov. Chris Christie of New Jersey, who openly embraced Obama at the height of last fall's campaign because he welcomed federal help following a hurricane, suddenly becomes suspect among his own party's faithful.

"Being attractive to people in both parties used to be considered unambiguously a strength," says Weingart, the Rutgers professor. "Now, being seen as a moderate or someone who works well with the other party has not been a benefit in the last few cycles."

Bobby Jindal, the Republican governor of Louisiana, addressed members of his own party in a column published in Politico on Monday, but he seemed to be channeling the attitude of many contemporary governors of both stripes: