Accessibility links
4 Facts You Might Not Have Known About The IRS Scandal : It's All Politics As it turns out, most of the groups flagged by the IRS for extra scrutiny didn't actually have to apply for tax-exempt status.

4 Facts You Might Not Have Known About The IRS Scandal

4 Facts You Might Not Have Known About The IRS Scandal 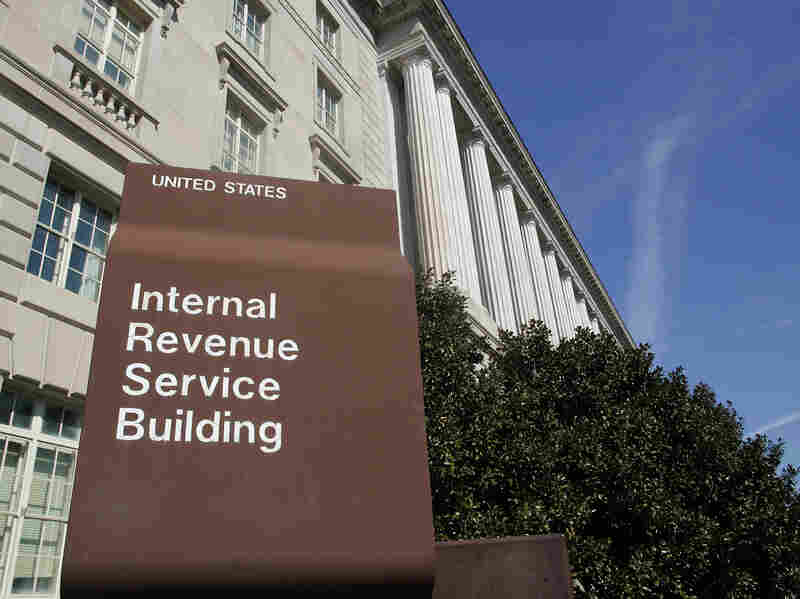 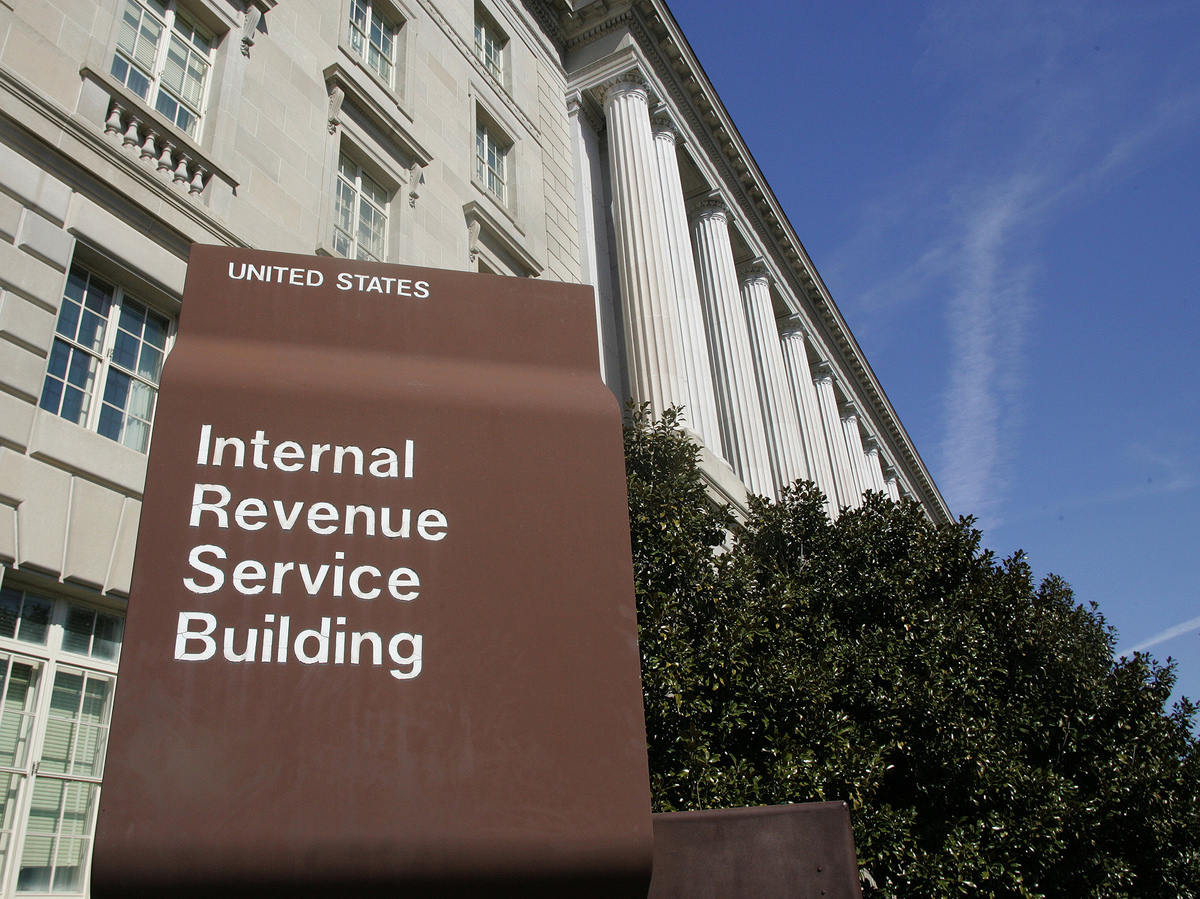 For a little more than a month now, we've been reporting on the IRS's flagging of Tea Party and conservative groups for extra scrutiny. Through it all, some basic questions remain: Who ordered the targeting? And why?

We don't have any satisfying answers to those questions yet — and it seems neither do the congressional investigators. But along the way, as new revelations have trickled out, we've noticed some surprising and even puzzling facts about the situation that haven't gotten much attention.

Here are four of them:

1. Most of the groups flagged by the IRS for extra scrutiny didn't actually have to apply for tax-exempt status.

For the Tea Party groups that were forced to jump through hoops, this will be a head-slapper.

As it turns out, the 501(c)(4) tax-exempt "social welfare" groups aren't required to get approval from the IRS to carry on their activities, and in most cases, these groups had no tax liability anyway. For some groups, government certification as a social welfare group could serve as a kind of good housekeeping seal, making it easier to attract donations. This allows them to assure donors their names will remain secret and the only thing the groups actually have to do is file an annual tax return.

Of the nearly 300 groups singled out for extra scrutiny, just 89 actually had to apply. Those groups were seeking 501(c)(3) charitable status. They can offer their donors a tax deduction in addition to anonymity and have to apply. 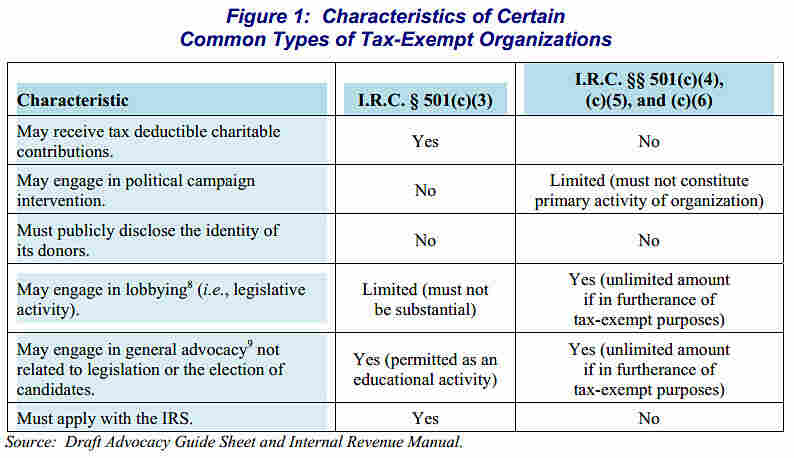 But that means 70 percent of the groups could have avoided the headache.

"I did not know until just recently as I've been going through all of the pamphlets that you could basically do what we were doing without tax status," said Becky Gerritson of the Alabama-based Wetumpka Tea Party after a congressional hearing earlier this month. "We were advised that this is what we should do and we thought it added legitimacy to our organization and that's why we did it."

"This is sort of a dotting the 'i' crossing the 't' thing for these groups and in some ways they didn't need these applications to be granted at all," says Tara Malloy, an attorney at the Campaign Legal Center.

2. Even if the right criteria had been used, 80 percent of the targeted groups would have warranted extra scrutiny.

Tea Party and patriot groups were flagged for extra scrutiny by IRS agents simply because of the names of their groups, which was clearly inappropriate.

But what if the IRS had used the correct criteria? That is, flagging groups that participated in a lot of political activity or got involved in campaigns.

The inspector general says 96 of the flagged groups had Tea Party and related terms in their names. Eighteen percent of those groups showed no signs of political activity and thus shouldn't have gotten any scrutiny. But that also means means a full 82 percent of them displayed enough political activity to warrant additional screening by IRS agents.

In the medical field, for instance, that would be a terrible success rate.

But get this: For groups that didn't have Tea Party or patriot in their names, the rate of false positives was even worse. Thirty-seven percent of those groups got extra scrutiny even though their files showed a lack of political activity.

3. Those intrusive questions that drew widespread criticism? Some of them are actually on the IRS application form.

The inspector general found that IRS agents asked groups applying for tax-exempt status "unnecessary" questions. Examples: requests for the names of donors; requests for lists of issues that are important to the organization and their positions. 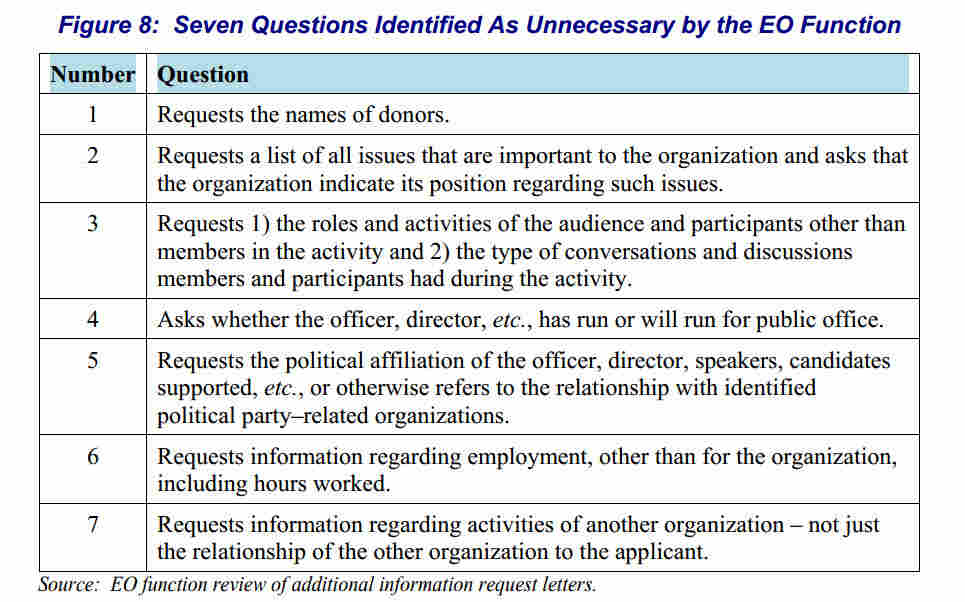 Groups testifying before a congressional committee said they were also asked to print out and send in the contents of their websites or any of their social media activity and were instructed to send in pamphlets passed out at rallies.

We were surprised to find that some of these questions were actually on the IRS 1024 form groups have to fill out when applying for tax-exempt 501(c)(4) status.

Right out of the gate, the first question asks for a whole lot of detail about the group's activities and who will be participating.

And the probing questions go on.

"List the organization's present and future sources of financial support, beginning with the largest source first," reads question 2 on the form.

And then there's question 16, "Does the organization publish pamphlets, brochures, newsletters, journals or similar printed materials? If 'Yes,' attach a recent copy of each."

4. Nonconservative groups got extra scrutiny, too. A lot of them.

This revelation isn't exactly new, but the numbers are eyebrow-raising.

Last month the IRS released a list of 176 organizations it says were pulled aside for further review because of potential political activity and ultimately granted nonprofit status. 501(c)(4) groups are allowed to lobby and do issue advocacy and even some campaign activity, but helping candidates get elected can't make up a majority of their work.

According to an analysis by the publication Tax Analysts, 46 of the approved groups on the list had Tea Party or patriot in their names, 76 were otherwise conservative-leaning groups and 48 were nonconservative or progressive. These groups are part of what Martin Sullivan, chief economist at Tax Analysts, describes as a "substantial minority" of those on the IRS list.

"If you look down the list you can eyeball it and see that many were conservative groups and many weren't and I just started doing Web searches on each of these groups," said Sullivan.

Consider the progressive groups below, which may have gotten caught in the dragnet because of their conservative-sounding names

Maryann Martindale applied for tax-exempt status for her group Alliance for a Better Utah in September 2011. When she heard back from the IRS, the agency asked about her group's activities and donors.

"We were asked what type of donors we had," says Martindale. "If we had candidates, political organizations, parties and such anything like that, if we had any donors that fit under those categories. We didn't."

A previous version of this post incorrectly said that Middle Class Taxpayers Association of San Diego waited three years before finally getting its tax-exempt status approved. In reality it took about one year.