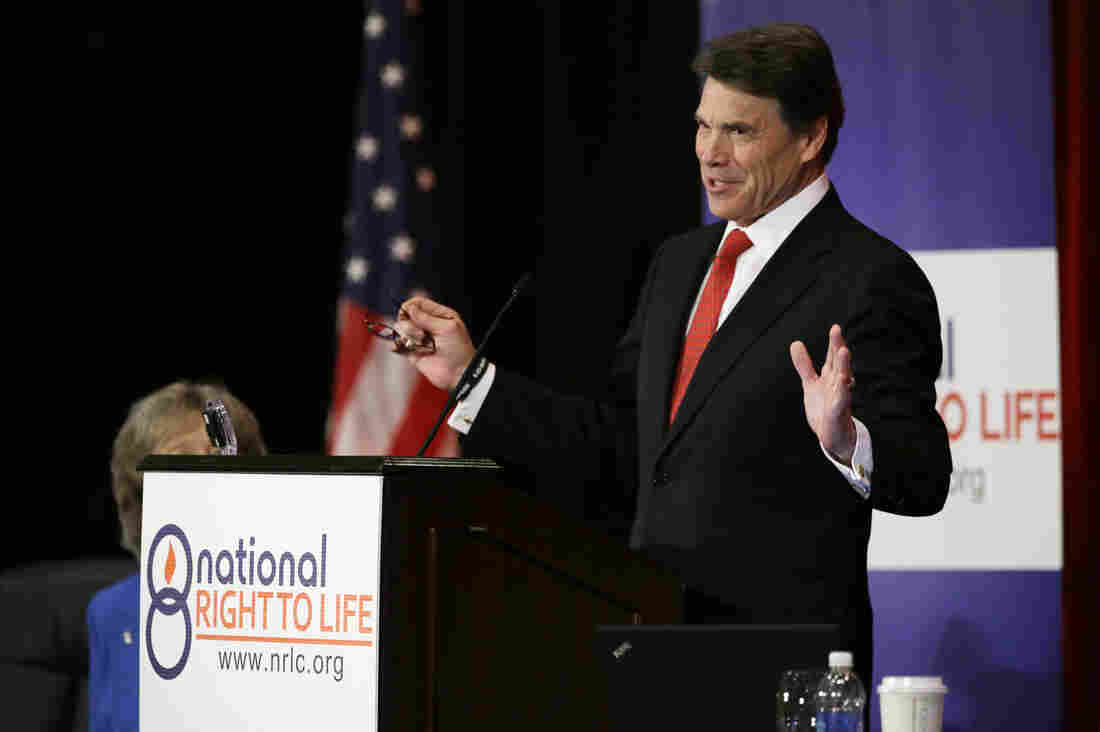 The fight over restrictive abortion legislation in Texas has given Gov. Rick Perry a chance to underscore his conservative credentials. Tony Gutierrez/AP hide caption 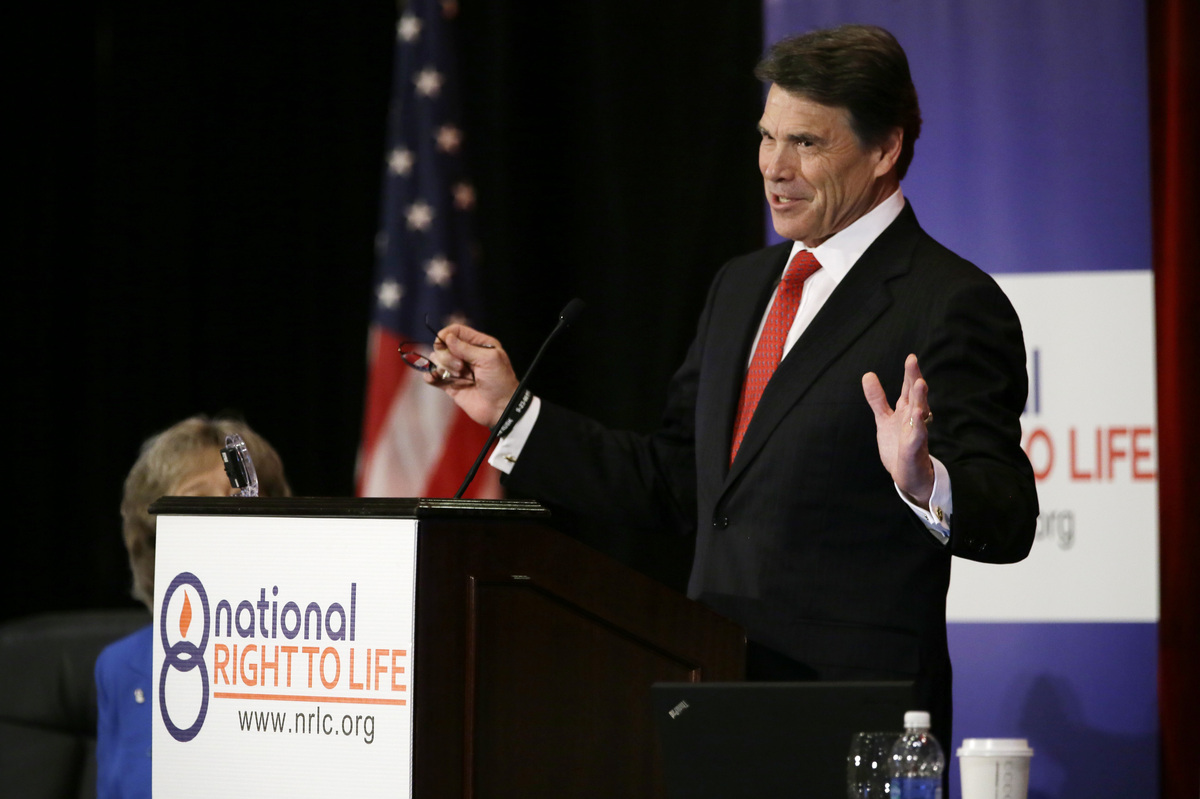 The fight over restrictive abortion legislation in Texas has given Gov. Rick Perry a chance to underscore his conservative credentials.

An irony of the recent Texas political theater: Democratic state Sen. Wendy Davis' filibuster aimed at stopping anti-abortion legislation raised not only her profile but that of Republican Gov. Rick Perry.

Shortly after Davis' talkathon ran out the clock on a bill that would potentially have made abortions much harder for women in Texas to obtain after 20 weeks of pregnancy, Perry put himself back in the national headlines.

First, the 2012 presidential candidate called for a special, 30-day session of the GOP-controlled Texas Legislature during which the members will focus solely on passing the bill.

Then, on Thursday, Perry raised eyebrows with his comments to an audience at the National Right To Life's convention in Dallas.

"The fact is, who are we to say that children born in the worst of circumstances can't grow to have successful lives? In fact, even the woman who filibustered the Senate the other day, was born in difficult circumstances. She's the daughter of a single woman. She was a teenage mother herself. She managed to eventually graduate from Harvard Law School and serve in the Texas Senate. It's just unfortunate that she hasn't learned from own example that every life should be given the chance to fulfill its potential and that every life matters."

That set off a predictable social media cascade of tweets, many but not all of them negative, about the governor.

It was almost like old times during the 2012 Republican presidential nomination fight, when Perry was nearly constantly in the headlines for one statement or another before gaffes caused his candidacy to flame out.

So Davis' filibuster not only helped raise her own stature — which allows her to raise more money — it also advanced Perry among his fans.

"The elevation of Wendy Davis as a statewide and, at least for the moment, a figure getting national attention, actually provides Perry a vehicle for reintroducing himself to a national conservative audience. And certainly on much better terms than when he last visited with that audience," Jim Henson, director of the Texas Politics Institute at the University of Texas, told me in an interview.

One of Perry's political strong suits has been his effective use of other politicians as foils, Henson notes. And Davis plays right into that. Indeed, she kept the feud with Perry alive with this statement Thursday:

"Rick Perry's statement is without dignity and tarnishes the high office he holds. They are small words that reflect a dark and negative point of view. Our governor should reflect our Texas values. Sadly, Gov. Perry fails that test."

This all happens at a key moment for Perry. Observers of Texas politics await his decision on whether he will seek another term in the governor's mansion. Meanwhile, there's strong speculation that Perry may be eyeing another presidential run, if not to win then as redemption for his poor 2012 showing.

As Henson suggests, Perry's uncompromising abortion stance helps him with conservatives, many of whom had doubts about him in 2012 (and not just for his debate performances).

Perry's support for mandatory HPV vaccinations of Texas girls and in-state tuition for the children of people illegally in the U.S. caused many conservatives to question his commitment to their cause. Indeed, as Henson reminded me, during the Republican primary campaign, Perry was sometimes booed by GOP audiences for these positions.

They weren't booing him Thursday but cheering and applauding.

That was in line with what Henson and his University of Texas colleague, Joshua Blank, have found in their polling. According to a piece they wrote in The Texas Tribune, Perry maintains relatively high approval ratings among Texas conservatives. Stances like the one opposing Davis go a long way toward assuring that support continues.

Another irony of Davis' filibuster: While she may be riding high in terms of name recognition and fundraising, she has fired up Texas and national conservatives.

That, in turn, could make it harder for her to win re-election to her state Senate seat or to win the bigger prize she is thought to be interested in: the governorship. So it could all prove a Pyrrhic victory. Or maybe it was more like the Alamo.

Indeed, even Davis' victory in stopping a vote on the anti-abortion bill was probably only a speed bump to its final passage in a very Republican legislature.

"In the initial aftermath of the drama for both sides, it's easy to forget the immediate context of this is a very Republican state," Henson said. Sure, she'll be able to fire up her base. But there's already a counterreaction among Republicans.

"They'll be able to use her in mailers as a fundraising point," Henson said. "And they'll be able to redouble their already pronounced efforts to get her voted out of office. She had a pretty tough fight last time."