Accessibility links
Will Texas Become A Presidential Battleground? : It's All Politics In recent years, Democrats have gained the upper hand in the Electoral College. Virginia and Florida, once GOP strongholds, have turned purple. Now, Democrats are turning their attention to the biggest Republican prize of all, Texas. 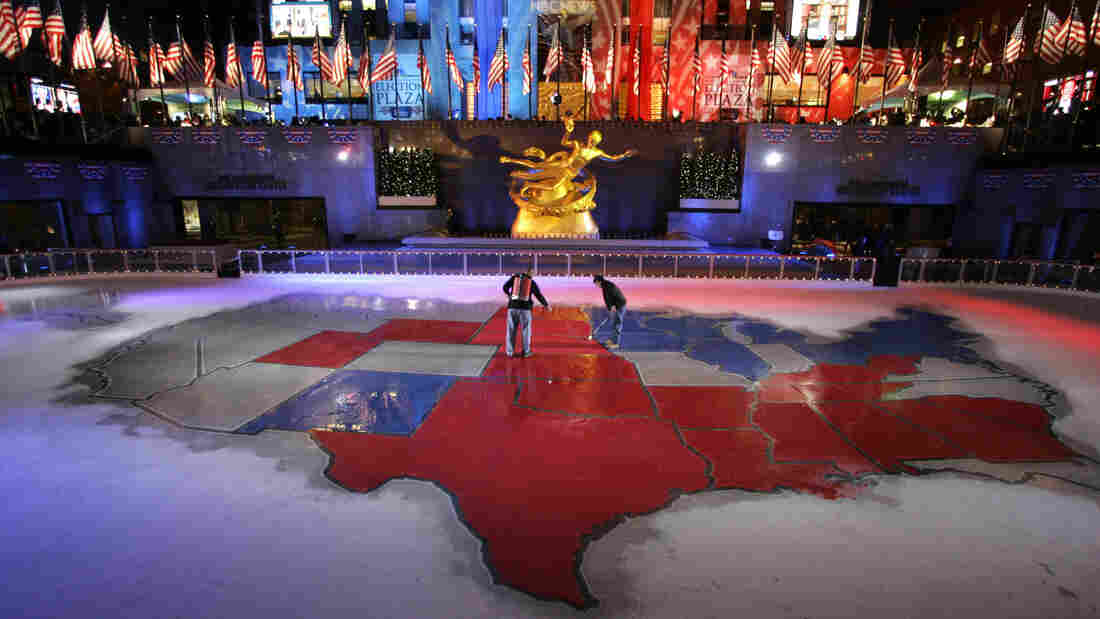 Texas was decidedly red on the electoral map in NBC News' "Election Plaza" in New York's Rockefeller Center in 2008. Do Democrats really have a chance to turn it blue in the future? Mary Altaffer/AP hide caption 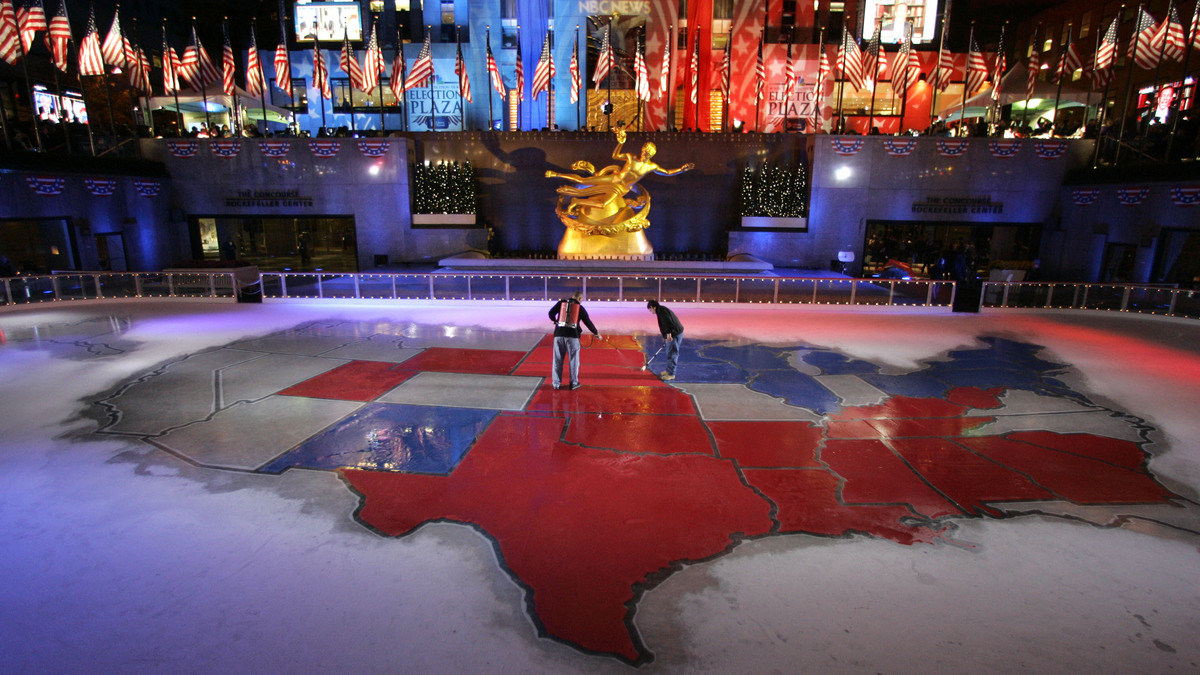 Texas was decidedly red on the electoral map in NBC News' "Election Plaza" in New York's Rockefeller Center in 2008. Do Democrats really have a chance to turn it blue in the future?

With the two parties in Washington gridlocked on immigration, the budget and other issues, it's easy to forget that when it comes to winning presidential elections, one party has a distinct advantage.

"The Democrats have a significant advantage on the electoral map that gives them the inside track going into 2016," says independent political analyst Rhodes Cook.

Cook's latest red and blue charts show that what used to be a Republican advantage has — over the past generation — flipped. There are now 18 states plus the District of Columbia that voted Democratic in every one of the last six presidential elections. That gives the Democrats a comfortable base of 242 electoral votes out of the 270 needed to win the presidency. On the other hand, only 13 states with 102 electoral votes have gone Republican each of the last six elections.

That is the painful reality for Republicans like strategist Alex Lundry.

"We're starting out really behind the curve here," he says. "We have to expand the map because the map right now is really disadvantaged distinctly for Republicans."

In recent years, Republicans have been watching the map shrink. Virginia and Florida, once GOP strongholds, have turned purple. Now, Democrats are turning their attention to the biggest Republican prize of all, Texas.

Yes, bright red Texas — where no Democrat has won statewide since 1994. Without Texas, Republicans' chances of winning the White House would fade to near zero. Texas Democratic Party Chairman Gilberto Hinojosa says his party's hopes are based on demographics.

"Forty percent of the people [in] the state of Texas are Hispanic; 15 percent are Asian-American or African-American. That's 55 percent of the population," Hinojosa says. "Texas is the only minority-majority state in the entire country that is not a Democratic state. And it's primarily because of the Hispanic vote."

Or, to be more accurate, the Hispanic nonvote.

A new group called Battleground Texas is planning to spend tens of millions of dollars trying to turn Texas blue by 2020. It is made up of Obama campaign veterans, like former field director Jeremy Bird, with lots of experience targeting and turning out minority voters for Democrats. Bird wants to do the same thing for Texas.

"If you look at the 2012 electorate," he says, "only 38 percent of all eligible Hispanics turned out to vote. Compare that to Florida, where that number is 62 percent. If 62 percent of Hispanic voters who are eligible to vote turn out and vote in Texas, it's a battleground state."

'All Over But The Crying'?

"That's where our problem is," Hinojosa says. "The moment that they get engaged and start voting, it's all over but the crying for the Republican Party in Texas."

Not so fast, says Steve Munisteri, the chairman of the Texas Republican Party. Munisteri says the Democrats' plans for Texas are based on a string of bad assumptions.

"The first false premise is that Hispanics will vote overwhelmingly for Democrats. We know that's not true," he says. "Republican elected officials are rational enough, a long time ago, to recognize how important Hispanics are to our state, and [they] actively sought the vote from Hispanic communities, with great success."

Munisteri agrees that Republicans do have a problem nationally. But he says Texas Republicans have the solution. Back before the 2012 election, Munisteri says, he warned a group of Republican Party officials that they needed to do a better job of engaging minority voters.

If they didn't, "it is a probability in the short term and a statistical certainty in the long term that the Republican Party will never win another national election," he recalls telling them. "And that's the bad news. Let me give you the good news and show you why we've been doing so much better in Texas."

Munisteri says Texas is the exception to the rule when it comes to Republicans and Hispanics. And he says he's ready to commit candidates and resources to match Democrats in the fight for Hispanic votes. So whether or not Texas turns blue by 2020, the state is certain to get a lot more attention from both parties even sooner.