Accessibility links
Partial Delay In Health Law Challenges Obama More Than Foes : It's All Politics The politics of the Obama administration's decision to postpone the Affordable Care Act's employer mandate are much easier for Republican opponents than administration officials and other Democratic boosters of the controversial law. 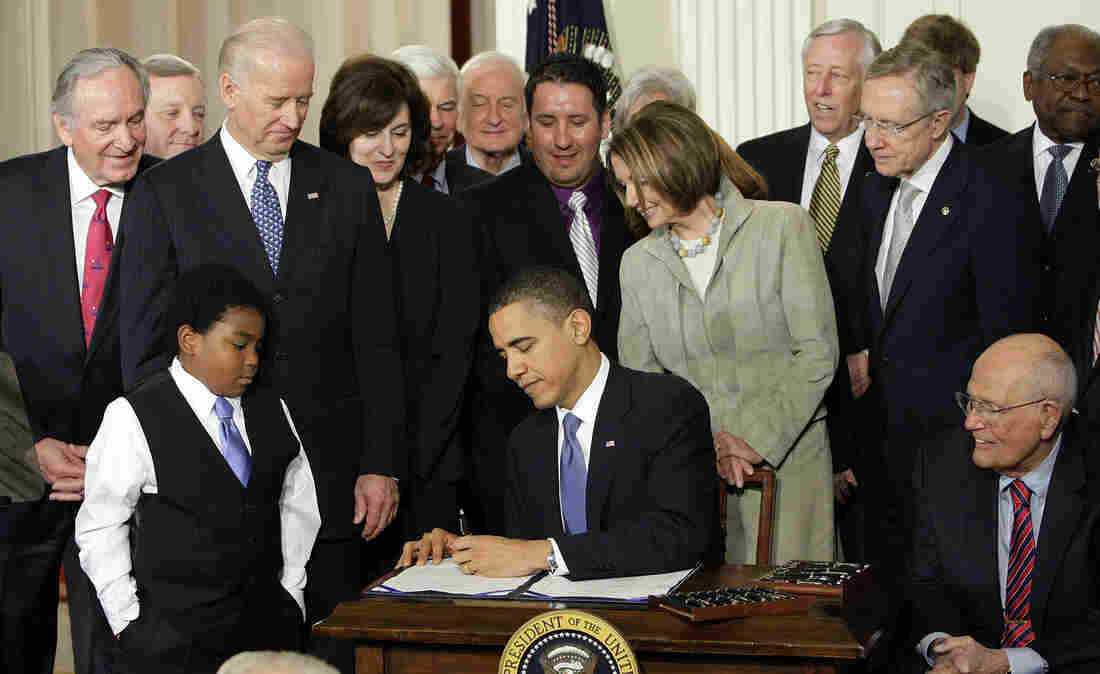 The Affordable Care Act's foes have long had a simpler message than its supporters. The postponement of the law's employer mandate continues that trend. J. Scott Applewhite/AP hide caption

It's too soon, obviously, to know how the Obama administration's decision to delay by a year the imposition of penalties on large employers that fail to provide health insurance to their workers will ultimately play out, politically.

But one thing that's certain is that the politics of the decision are much easier for the Republican opponents of the Affordable Care Act than they are for administration officials and the other boosters of the health care law.

For opponents, the politics are simpler. First, foes of the administration and Obamacare are unified in their oft-stated view of the law. That view, now several years strong, is that the law is a monstrous, job-killing wrecker of the U.S. health care system that has become a political liability for the administration and Washington Democrats generally.

The administration's move to delay to 2015 the employer mandate penalties for employers with at least 50 workers plays readily into their narrative — now several years old — of the law being the legislative equivalent of the Titanic. They're also saying the administration, through its action, is acknowledging as much.

Not only are the health law's opponents trying to put up points against the administration over the postponement itself (the GOP-controlled House Energy and Commerce Committee announced Wednesday it was investigating), but they are trying to inflict additional damage by accusing the administration of playing politics by pushing the employer penalties past the 2014 midterm elections. Witness part of a Wednesday news release from the National Republican Congressional Committee:

"The politics of this couldn't be clearer: The President is trying to delay implementation of ObamaCare because he knows it will cost Democrats seats in the House in 2014."

Since just about everything that occurs in Washington is flavored by politics, accusing the Obama administration of taking politics into account in its decision might not be the most damning of all the allegations. Many Americans already take as a given that politics flow into policy decisions.

Also, if delaying the employer mandate helps to remove a controversial issue that might have hurt congressional Democrats at the polls, it arguably would have been political malpractice for the president, as the leader of his party, to not do as he did.

Among the reasons the politics of the postponement are more difficult for Democrats than Republicans is that the narrative of the law's supporters is more complicated.

First, administration officials are forced to explain how the implementation of the health care law is proceeding apace, despite the obvious and continuing difficulties it is facing.

Valerie Jarrett, an Obama senior adviser, made an attempt at that in a White House blog post Wednesday. "We are full steam ahead for the Marketplaces opening on October 1," Jarrett wrote, referring to the health care exchanges where individuals needing health insurance will be able to purchase coverage.

Meanwhile, she portrayed the postponement as little more than one of the expected midcourse corrections the administration always knew it would have to make.

"As we implement this law, we have and will continue to make changes as needed. In our ongoing discussions with businesses we have heard that you need the time to get this right. We are listening," she wrote.

Adding to the complexity are the details of who is really affected. Ezekiel Emanuel, a former Obama White House health care adviser, explained on CNBC Wednesday that the universe of employers and workers who will be impacted is relatively small:

"First of all, lets be clear, this applies to a small number. Those [with] under 50 [workers] never had a penalty and that's the vast majority of employers, about 95 to 96 percent of all employers. It really applies to the 200,000 employers who are — have more than 50 workers and 94 percent of those employers already ... are giving their employees health insurance without a mandate, without a penalty. And they are going to continue ... so this applies to about 6 percent of the largest companies in the country, mostly retailers and restaurant companies. For them it is a good breather."

All of what Ezekiel says may be true, but try getting that into a political ad or a snappy sound bite and you begin to understand the problem for Obama and other Democrats.

The second political challenge for Obama and Democrats is that where Republicans are fairly united in interpreting the postponement as a sign of Obamacare's failings, the response of Democrats is more multifaceted.

While some echo the administration and Emanuel, other progressives see the postponement as yet another sign of the president's willingness to concede too much to his political adversaries, or as proof that the administration should have pushed harder for a single-payer public option.

So while the Obama administration's move unified Republicans, always a good thing politically, for Democrats the reactions ranged from a resigned understanding of the need for postponement to disappointment and regret for what could have been.

That left Obama with the harder task of maintaining the energy of the law's supporters. Not impossible but definitely challenging.