Accessibility links
Egypt Confronts Obama With Yet Another Limit To His Power : It's All Politics The military coup that overthrew former President Mohammed Morsi has left a complex situation, complicating President Obama's response and leaving him mostly as a spectator. He must choose his words carefully.

Egypt Confronts Obama With Yet Another Limit To His Power

Egypt Confronts Obama With Yet Another Limit To His Power 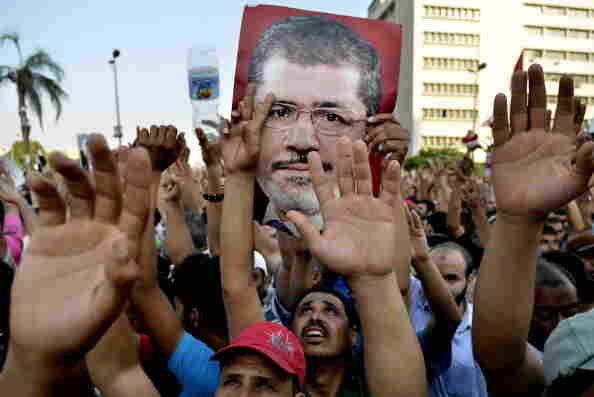 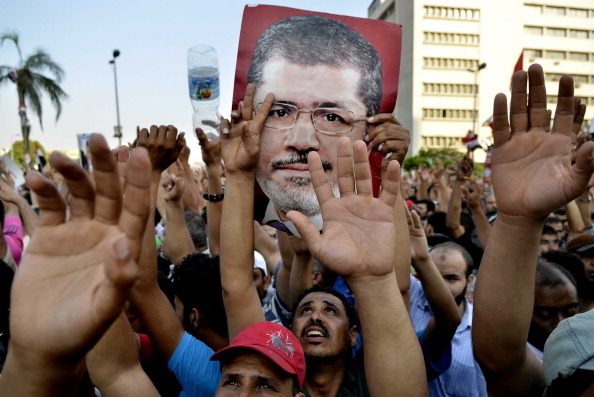 As if President Obama's presidency hadn't been humbled enough by the limitations placed on him by the partly GOP-controlled Congress, there's always the recurring problem of Egypt.

The crisis of democracy in that country, specifically the military coup that overthrew former President Mohammed Morsi, has left Obama mostly a spectator to events.

Indeed, he is even less free than the average observer of the events in Egypt since he can't even use the word "coup" to describe the change in government there.

It's widely suspected that he and other administration officials have so far avoided using the word to avoid triggering a law that would require cutting off $1.3 billion of aid to the Egyptian military. That aid appears to be one of the few significant levers the U.S. has to influence events there.

From the time in 2011 when Egypt first became a part of the Arab Spring — before the overthrow of former President Hosni Mubarak — the Obama administration has trod carefully in its response as it picked its way through this particular Middle East minefield.

Given Egypt's strategic importance as the largest Arab nation and its role in maintaining decades of peace with neighboring Israel, as well as uncertainties about what would follow Mubarak, Obama's embrace of the initial Egyptian revolution was at first cautious.

That led to contrary criticisms: He didn't support Mubarak enough, some said. Others said he supported the former strongman too long.

If the situation with Mubarak was complicated, the coup that ousted Morsi was even more so. Yes, Morsi, an Islamist and official of the Muslim Brotherhood, was the first Egyptian president elected in a free and open election.

But Morsi had increasingly acted undemocratically. Earlier this year, for instance, he proclaimed himself Egypt's ultimate power who couldn't be challenged by the judiciary. And he talked of supporting jihad in Syria.

The moral and strategic muddle of a coup that ousted a democratically elected leader who appeared to be moving in a decidedly anti-democratic direction may largely explain why senior congressional Republicans have been mostly silent about Obama's handling so far of the latest eruption of crisis in Egypt. (Some editorial writers were less reluctant to reserve their advice.)

This is one instance where much of official Washington seems to have mostly returned to the old practice of stopping politics at the water's edge.

Speaking to journalists during an unannounced July 4 trip to Afghanistan, Sen. John Mccain, an Arizona Republican and frequent critic of the administration's foreign policy, echoed Obama's statement on the coup.

"I believe that the defense minister and the military has to show us and the world that they're making a rapid transition back to democracy," said McCain. "And that will be, I think, the indicator to the level of support that we will provide Egypt."

Politics weren't totally absent from the Obama administration's Egypt response. Secretary of State John Kerry and his department drew criticism and were even ridiculed for his being in Nantucket and on his yacht Isabel Wednesday when the coup was actually occurring. The criticism, implied and stated, was that he should have been lashed to his desk in Foggy Bottom or headed to Egypt to sort things out. Or whatever.

The problem for Kerry and the administration was that a State Department representative initially flatly denied Kerry was on his boat.

When it came to how to respond to the Egyptian situation, however, the confusion over Kerry's whereabouts was obviously the least of the administration's problems.