Accessibility links
Why Pols Like Eliot Spitzer Can't Quit Politics : It's All Politics The usual parade of politicians brought down by scandal has turned into something else: a parade of disgraced politicians believing they could and should make a comeback. 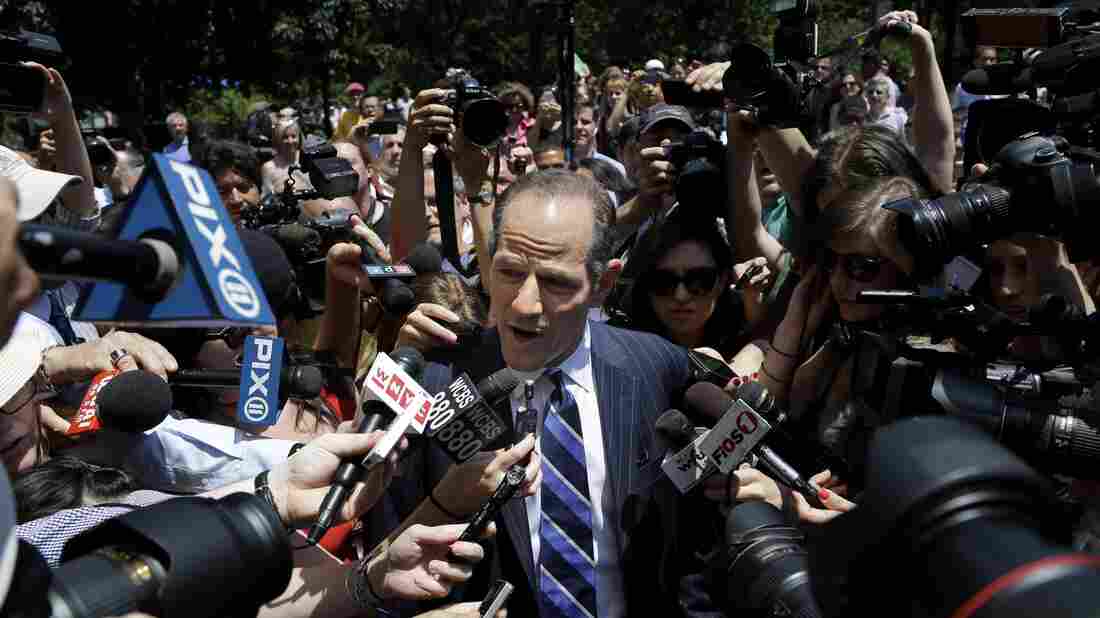 Eliot Spitzer is surrounded by media Monday as he tries to collect signatures for his run for New York City comptroller. The former governor, who stepped down in 2008 amid a prostitution scandal, says he is planning a political comeback. Seth Wenig/AP hide caption 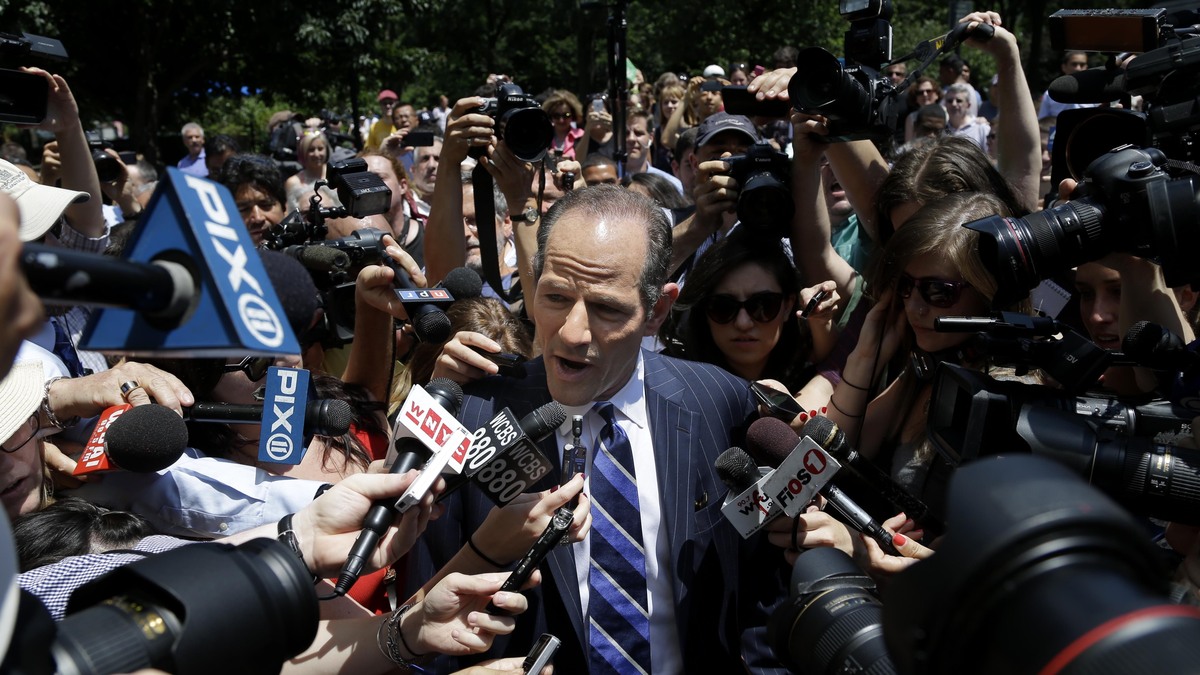 Eliot Spitzer is surrounded by media Monday as he tries to collect signatures for his run for New York City comptroller. The former governor, who stepped down in 2008 amid a prostitution scandal, says he is planning a political comeback.

It's a political ticket only Jon Stewart could dream up.

With Anthony Weiner leading the race for New York mayor in some polls, fellow Democrat Eliot Spitzer now hopes to appear on the same ballot in the city comptroller slot.

This latest news comes in a season that has already seen the return of South Carolina Republican Mark Sanford to the House.

"Sanford's success led to Weiner's reassessment, and Weiner's positive polls have led to Spitzer's thinking, 'Why not me?' " says Lara Brown, a political scientist who wrote a dissertation on congressional scandals.

But given the bruising reception his candidacy received — The New York Daily News' cover headline Monday read "Lust for Power," while the New York Post went with "Here We Ho Again" — Spitzer's decision raises a different question: Why do men who have become national laughingstocks seek a return to office?

"Guys like Sanford and Weiner and now Spitzer just cannot keep away from the public eye," says Dennis Johnson, a professor of political management at George Washington University and proprietor of the website congressionalbadboys.com. "I would call that a pathology."

It's not certain that either Weiner or Spitzer will prevail. There is, however, some logic to an attempted return to the public arena: This is a time when all manner of political comebacks seem possible.

Former President Bill Clinton, who was impeached for lying about sex with a White House intern, is now among the country's most popular and respected politicians, and his wife is the early front-runner for president in 2016.

What makes a disgraced politician want to come back is probably what made him run in the first place: some combination of ego and a genuine belief he has something valuable to offer.

"The ego and voltage that drove them to get where they've gotten is not easily switched off, even after what the kids today are calling an 'epic FAIL,' " says Robert Thompson, a pop culture professor at Syracuse University. "This is especially true in an era where there are examples of people who have overcome scandal and indiscretion, such as Bill Clinton and others."

All of this represents something new in American politics. Plenty of politicians have weathered scandals, and many have enjoyed post-scandal success in lobbying and media.

Spitzer himself, since resigning as governor of New York in 2008 following revelations that he'd been a client of an escort service, has worked as an online columnist and cable television commentator.

But people who have been driven from office under the most humiliating circumstances have not historically sought to subject themselves again to the judgment of voters.

In the classic 1941 film Citizen Kane, the title character's political ambitions are wrecked by the revelation of an extramarital affair.

Something like that dynamic played out in real life last year. Former House Speaker Newt Gingrich pronounced himself "appalled" that CNN's John King would bring up his cheating on an ex-wife during a Republican presidential debate.

Gingrich's attack on the reporter — and the media in general — helped propel him to a rare victory in the South Carolina primary.

But that's actually a fairly unusual tactic. Most scandal-pocked pols adopt an apologetic stance. Sanford and Weiner have both done public penance for their past sins (an extramarital affair in Sanford's case, lewd behavior online in Weiner's).

"I strayed, I erred, I violated a code of behavior I should not have, and the public understands what I'm saying," Spitzer told Bloomberg News.

Although sex scandals can easily upend a career, attitudes may be shifting.

Today's popular culture is more forgiving of transgressions — not only providing a sympathetic forum for repentant politicians on talk shows, but framing entire television series such as Scandal from the point of view of the offenders.

"If we were talking about a guy like Eliot Spitzer or Mark Sanford in 1975, I don't care how much they apologized, it was going to be hard to run for elected office after that," says Thompson, the Syracuse professor.

Things are different now. We're accustomed to celebrities trading on sex tapes rather than being ruined by them. Standards are still different for elected officials than for movie stars, but people understand they're human. And they've seen ample evidence at this point that some are bound to misbehave.

As long as that misbehavior is not tied directly to their job performance, they may well be forgiven, says David Doherty, a Loyola University Chicago political scientist who has studied public attitudes about scandal.

"Having been involved in a scandal is not a deal-breaker in the eyes of many citizens," he says. "The public is, in some circumstances, willing to forgive these transgressions, or at least give greater weight to other characteristics, such as their policy positions or apparent leadership skills."