Accessibility links
With An Eye Toward 2016, Rick Perry Reboots : It's All Politics The Texas governor announced Monday that he would not seek a fourth term, but gave strong indications that he'd like another shot at the GOP presidential nomination.

With An Eye Toward 2016, Rick Perry Reboots

With An Eye Toward 2016, Rick Perry Reboots 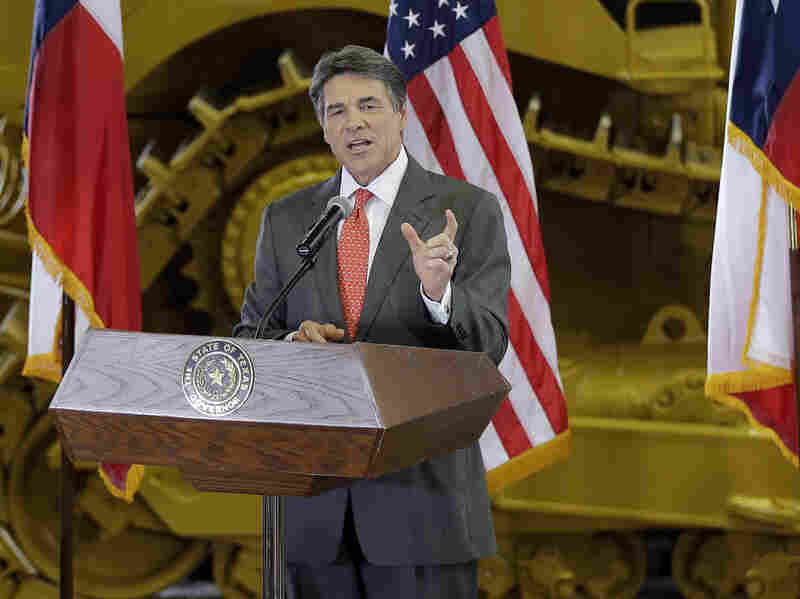 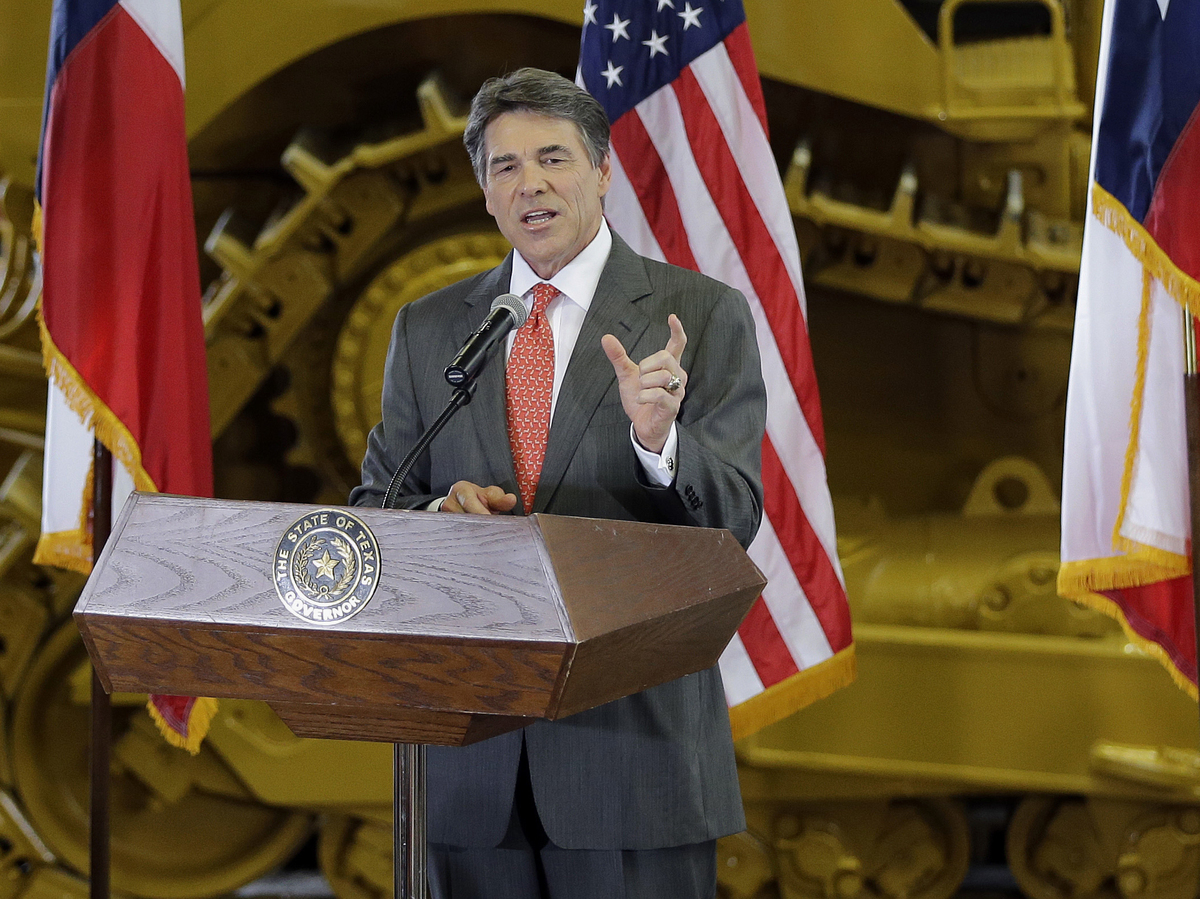 Texas Gov. Rick Perry announces he will not seek re-election as governor, Monday in San Antonio.

A rolling, cross-country road show during which he'll tout the Texas economy and charm grassroots voters and deep-pocketed donors.

Mixing it up back home in Austin with intensifying battles to limit legal abortion and push back against "Washington policies."

It would — it could — be the equivalent of a reputation recovery tour, says Evan Smith, CEO of The Texas Tribune.

Smith imagines the tour as an opportunity for the governor to erase the big asterisk that appeared next to his name after a disastrous, oops-a-daisy-a-minute 2012 presidential campaign.

"He puts himself in circulation, he extols conservative principles, he laughs about the fact that he had a bad go of it the last time — but he loves America, he loves Texas," Smith says. "That's got to be the strategy."

Because Perry, who surprised few with his decision not to run for an unprecedented fifth term leading the Lone Star State, clearly wants another shot at his party's nomination.

Just listen to how he threaded his speech Monday, announcing he'd step down when his term ends next year, with everything conservative Republican presidential primary voters want to hear: Aggressive tort reform. Business-friendly policies. Jobs. The fight for "traditional values" of heterosexual marriage and severe limits on abortion.

"He's holding the door open to a presidential run," Smith said. "[The speech] had all the components of a potential presidential campaign, no question."

But then there's the unavoidable issue of his last presidential bid, when his highly anticipated campaign dissolved into shambles, undone by missteps and misstatements that began almost from the moment it launched.

Could even the most masterfully planned recovery tour change his national persona in time for him to make a credible foray into presidential politics in 2016?

"It would be tough," says Cindy Rugeley, a political scientist at Texas Tech University. "Even if you look at who Texans would support — more people would like to see Sen. Ted Cruz run, and I think even New Jersey Gov. Chris Christie was higher in the polls."

But Suzanne Bellsnyder, a Republican strategist in Texas, says the longest serving governor in state history should never be underestimated: "Gov. Perry and his team have been winning long-shot races since the early '90s and have beat some of Texas' giant political figures. If his team is focused — and I believe this decision today not to seek election signals his desire to focus — Team Perry can make it happen."

"After two lackluster presidential races, the GOP is looking for an inspiring leader, someone who can make us feel the fire in our bellies again," she said.

Texas Democratic strategist Matt Angle argues that Perry will leave a "pretty sad legacy" as governor, with the nation's highest percentage of residents without health insurance and high school dropout rates that compete with the worst.

"Rick Perry has exploited the natural resources of Texas to advance himself," Angle said Monday, scoffing at the notion that Perry may be able to position himself as a viable national candidate in the months to come.

"He not only embarrassed himself the last campaign, but he embarrassed Texas," Angle said. "The treads are off the tires and he's running bald now."

Perry's advocates, and even many skeptics, however, say that the governor has a powerful jobs story to tell out of Texas, which in the last three years has seen 8 percent of the nation's population growth and 40 percent of its jobs growth.

"Oh, I think he does have a path to the nomination," says Rusty Kelley, an Austin lobbyist who has known the governor since they were both still living in West Texas, back when Perry was a Democrat and running for a seat in the state Legislature.

"He'll be known for job creation, for his economic development team that has done a superb job," Kelley says.

Says Rugeley, the Texas Tech professor: "He can't argue that he and God stood hand-in-hand and put oil in the ground. But jobs and the economy were good. He created an environment that enabled jobs to develop."

"There's the argument that education and health care suffered under him," she says, "but, at the same time, maybe that wasn't a priority in Texas."

The online world is chockablock with Rick Perry blooper lists and videos. Some are unsettling, in that they suggest a lack of knowledge of basic historic facts (he once placed the Revolutionary War in the 16th century); some are simply awkward and uncomfortable (the "oops" debate moment when he couldn't recall the third federal agency he'd like to eliminate); and some are funny, maybe even endearing (like when he encouraged people at a new media convention to follow him "on Tweeter").

Smith, the Texas Tribune CEO, says that on paper Perry has always had the makings of a successful GOP presidential candidate.

If people are willing to forgive his fumbles and if he can differentiate himself from the looming pack of Republican presidential hopefuls — from Florida Sen. Marco Rubio to Kentucky Sen. Rand Paul — he has the potential to be formidable, Smith argues.

The performance of the Texas economy under Perry's dozen-plus years as governor and his principled stands on issues near and dear to conservative GOP primary voters is the foundation, Smith says, for a strong presidential bid.

As long as he can make people forget that he's the guy who couldn't remember three things.