Accessibility links
Democrats Want To Mess With Texas? GOP Says Not So Fast : It's All Politics Democrats see opportunity in Texas' fast-growing Latino population. But the Republican Party is strong in Texas — very strong. Still, the GOP is split on how to handle the upcoming demographic changes: play to the base or try to recruit new Republicans? 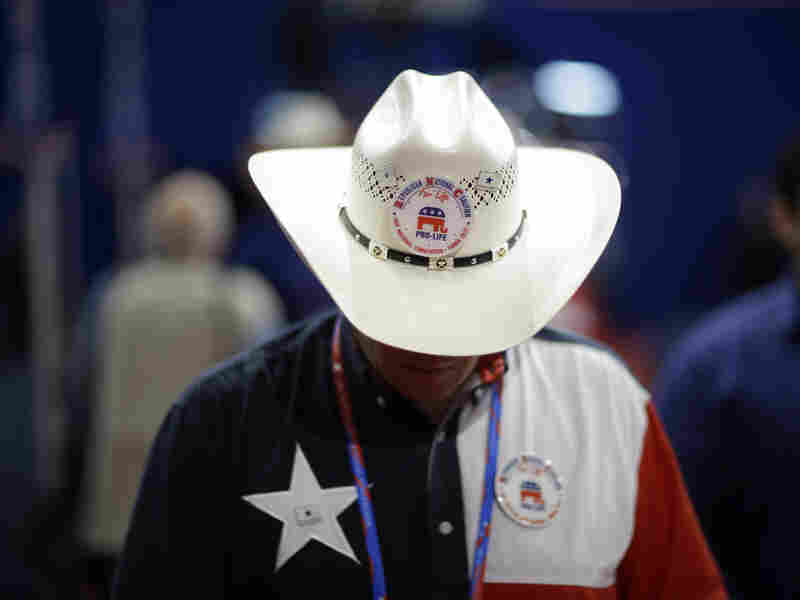 A Texas delegate on the floor of the Republican National Convention in 2012. David Goldman/AP hide caption 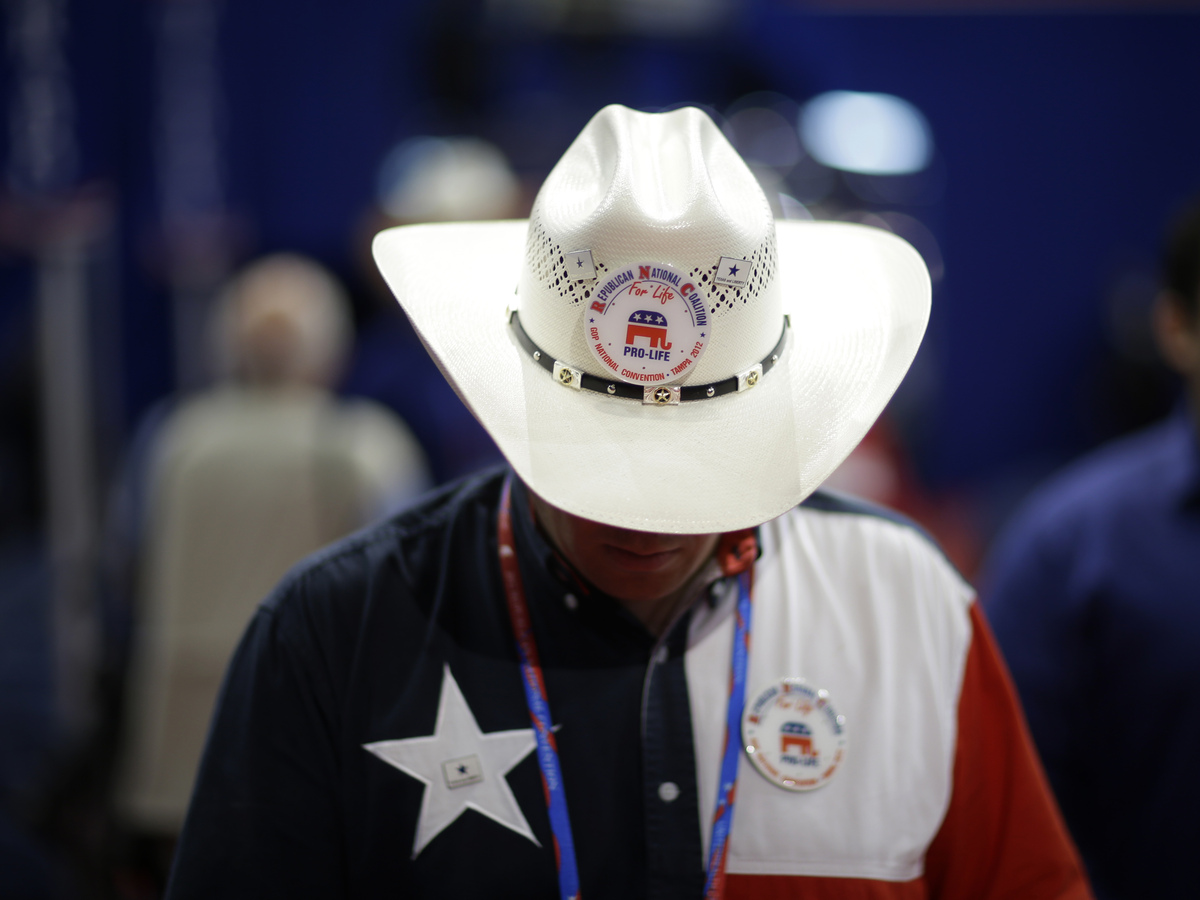 A Texas delegate on the floor of the Republican National Convention in 2012.

Nearly two-thirds of the Texas Legislature stands with the GOP. Republican candidates have won 100 statewide elections in a row — and they're beating Democrats by a margin of between 13 and 18 percentage points.

It's a confident-looking group — nattily dressed and smiling — that gathers on an early Saturday morning in Austin for the State Republican Executive Committee meeting. Even the state chairman of the Texas High School Republicans has come with his fiddle to play the national anthem.

This is a very different party from when George W. Bush walked the streets of South Texas in bluejeans and cowboy boots and courted Texas Hispanics with his lousy but lovable Spanish. Those days are gone.

Now Tea Party favorite Sens. Ted Cruz and John Cornyn lead the fight against the immigration bill. And that has Democrats, both inside and outside Texas, rubbing their hands with anticipation. They envision Hispanic voters flocking their way; demography will then become destiny, and the Republicans in Texas will be overwhelmed by sheer Hispanic numbers.

And most everyone agrees that someday that's probably what is going to happen. But the $64 question is: When is "someday"?

Blakemore is in the business of counting votes.

"Hispanic participation is so low right now, I don't think anybody knows where the Hispanics are going to be 10 years from now," he says.

Although there were no exit polls, there is no dispute that Hispanic turnout in Texas in 2012 was low — very low. And the Republican-dominated Legislature is working to keep it that way by drawing election districts that provide little competition.

If there are few competitive races down ballot — say, for the Texas House of Representatives — Democrats stay home. Why bother going to the polls if the outcome is predetermined? Republicans, of course, know this, and Blakemore says he expects the GOP will redraw the lines again in their favor in 2020.

But demographic changes can be held back through creative cartography for only so long. And so the Texas GOP announced last month that it will add nearly two dozen new staffers — most of whom will organize Texas Hispanics. The Koch brothers have pledged $8 million to the Texas GOP to fight off the new Democratic organizing effort called Battleground Texas.

Still, the party is split.

Many rank-and-file Texas Republicans think the leadership is nuts to believe that Hispanics would ever become Republicans in force. They're more interested in strict voter ID laws and high border fences. But other Republican leaders believe the GOP can recruit Hispanics — and Asians and blacks.

Mike Gibson, the Republican Party chairman of the most diverse county in the United States, is fighting the popular notion inside the Texas GOP that you're not really a Republican unless you toe a rigid ideological line.

"We come out with these edicts that if you're not this, then you're not one of us. Whatever 'this' is — it doesn't really matter what it is," he says. "And the Democrats have been very smart and jumped on that."

Gibson's county, Fort Bend, is a suburb of Houston. By 2020, Fort Bend is expected to be 25 percent Asian, 25 percent African-American, 25 percent Hispanic and 25 percent white. You would expect this suburban and rural district to be a Democratic dream, but it's solidly Republican.

"This last election cycle, we got all of our candidates together and we organized the county and we were able to go out and ... knock on 40,000 doors," Gibson says.

Gibson does not sneer at President Obama because he's learned that some of the voters he is trying to recruit like Obama. And Gibson doesn't rail at the Democratic Party as a bunch of radical socialists because that doesn't sell with suburban independents either. Instead, he organizes relentlessly and talks about economic issues, education, jobs, roads, taxes, infrastructure and a strong military.

Gibson is quietly role-modeling a more inclusive GOP. "What we have to do is go and reach them where they are — not make them come to us," he says. "And we have to go with a message that resonates with those communities."

Playing To The Base

Through his organizing, Gibson is uniquely connected to the state's political future. However, the political leaders at the top of the Texas GOP play more to their deeply conservative Republican base.

For example, when the Supreme Court struck down key parts of the Voting Rights Act last week, Texas Attorney General Greg Abbott crowed that the state was now free to implement Republican redistricting maps. These same maps were thrown out by federal courts as being intentionally drawn to discriminate against Texas Hispanics.

Abbott's strategy is reflective of current Republican orthodoxy. And that is: If Republican politicians stray from their deeply held conservative values, their base will abandon them and they will lose.

And so last month, Gov. Rick Perry vetoed Texas' version of the Lilly Ledbetter Fair Pay Act, which was aimed at helping Texas women get equal pay for equal work. Close on its heels came Democratic State Sen. Wendy Davis' abortion filibuster. Thousands of Texas women flocked to the capital to support the senator from Fort Worth. After they succeeded, Perry and Lt. Gov. David Dewhurst responded with taunting, polarizing language, and Perry immediately called another special session in which the Republicans will almost certainly pass their abortion bill.

Led by their steadfast governor, the party is championing a deeply religious, anti-abortion, pro-business, anti-tax and anti-government agenda. It's a political party wary of minorities' intentions, standing in firm opposition to Planned Parenthood and gay marriage. Like the Alamo, it's fortressed by patriots completely committed to their cause. And as they look out over the ramparts, they can see the future massing for an attack.