Accessibility links
Marco Rubio: Poster Boy For The GOP Identity Crisis : It's All Politics The Florida senator was supposed to be one of the emerging leaders of the Republican Party. But his leadership role on the immigration overhaul has brought a lot of criticism from his party's anti-amnesty base. His experience illustrates the divides in the current GOP. 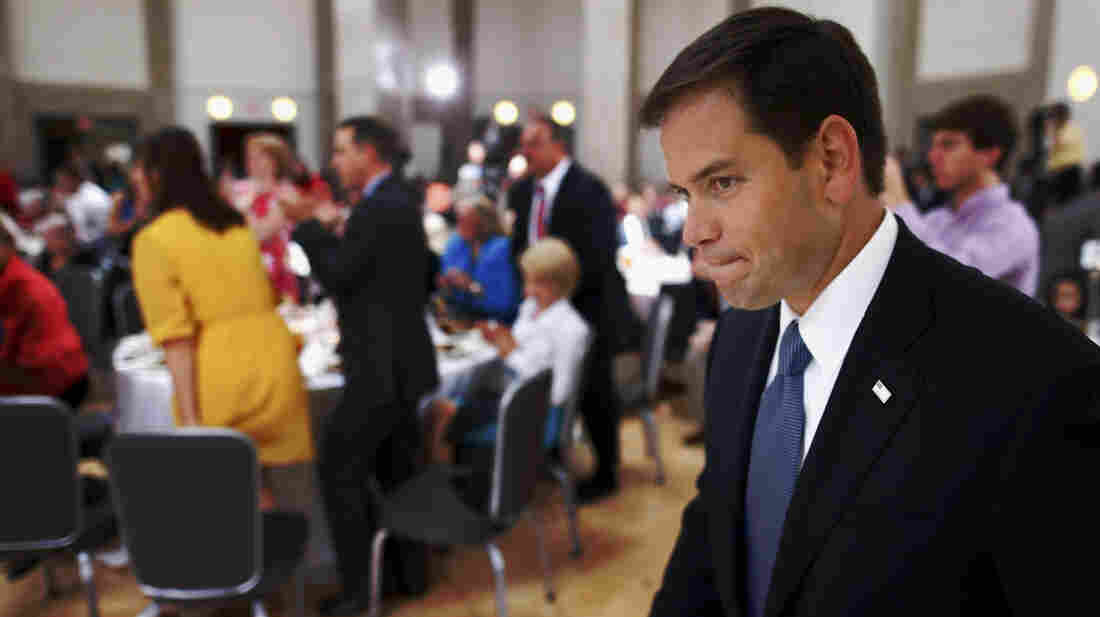 Sen. Marco Rubio, R-Fla., walks toward the stage as he is introduced at a Faith and Freedom Coalition conference in June. Charles Dharapak/AP hide caption 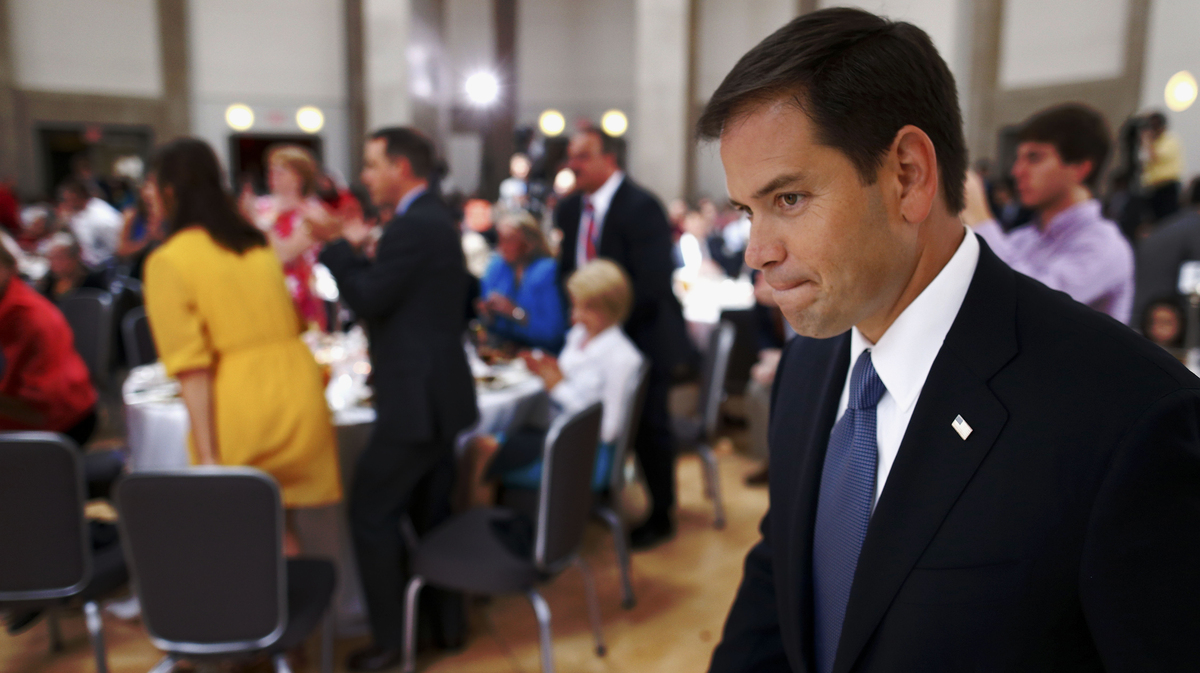 Sen. Marco Rubio, R-Fla., walks toward the stage as he is introduced at a Faith and Freedom Coalition conference in June.

The Republican Party seems like two parties these days. In the Senate, Republicans joined a two-thirds majority to pass an immigration bill. But in the House, Republicans are balking.

Strategist Alex Lundry says it's hard to figure out the way forward when your party's base of power is the House of Representatives.

"One problem we have in the wilderness is that there are a thousand chiefs," he says. "And it is hard to get a party moving when you don't have somebody at the top who is a core leader who can be directive."

One such leader was supposed to be Marco Rubio, the charismatic, young Hispanic senator from Florida. Of all the prospects for the GOP presidential nomination in 2016, Rubio has been the most visible. He took a leadership role on immigration, and he's been taking it on the chin from his party's anti-amnesty base.

Pete Wehner, a former aide to President George W. Bush, says conservatives gave Rubio the benefit of the doubt at first. But within the past month or so, he says, "Rubio has absorbed a lot of blows, and the criticisms against him have really amped up," Wehner says. "And he's going to emerge from this immigration debate in some respects a weakened and wounded figure."

If Rubio does run for president, he will have to compete in early states like Iowa. Steve Deace, an Iowa conservative activist and talk show host, says Rubio's support of a path to citizenship for immigrants in the United States illegally has hurt him.

Rubio Tries To Convince Conservatives He Hasn't Been Duped

"I think a lot of the entire conservative movement is aligned against him on this," Deace says. "I think it's him against a lot of his own tribe."

Rubio has been booed at Tea Party rallies. Glenn Beck has called him a "piece of garbage." Polls show his support among Republicans has dropped by double-digits.

"This is undercutting his argument for the presidency. Rubio's argument for the presidency is: I defy all the leftist cliches. I'm Hispanic, I didn't grow up rich, I'm not a person of privilege, and ... the American dream is still attainable to me," Deace says. "And when he goes out there and argues for what most people think is amnesty ... with a bunch of people who are big-government people, it undercuts what we like about him."

Rubio has defended himself in a speech on the Senate floor.

"It would have been a lot easier to just sit back, vote against any proposal and give speeches about how I would have done it differently," he said. "This certainly isn't about gaining support for future office."

But Rubio has also been getting some high-level backup from the establishment wing of the party. The Chamber of Commerce and several big Republican superPACs have been running ads supporting his work on immigration.

Rubio may try to make up lost ground as a champion of another bill that's popular with the GOP base — a ban on abortions after the 20th week of pregnancy. That might help with some anti-abortion activists, but not with those who see the immigration bill creating lots of new Democrats to vote for candidates who support abortion rights.

Rubio's experience says a lot about the state of the Republican Party right now, Wehner says.

"I think what the Rubio case study shows us is that reforming the Republican Party is going to be a hard task," Wehner says.

But Deace sees it differently. When pundits wonder why Republicans can't seem to "take one for the team" and put aside their differences on taxes, farm subsidies or immigration, Deace points out that it's because the Republican Party isn't really a team at all.

"We're not a coalition-driven party," he explains. "We're an ideologically driven party. The Democrats have a coalition-driven party, so you may have black ministers that agree with me theologically and morally voting for the same candidates Rosie O'Donnell does because they have a coalition in order to get access to government for something they believe they need. The Republican Party is not a coalition of factions; it's an ideological party. ... It's kind of hard to have a party for [Tea Party favorite Texas Sen.] Ted Cruz and [House Speaker] John Boehner if you're an ideological party — those two guys don't believe the same things."

And that's the problem facing the GOP as it struggles to update itself to appeal to a changing electorate. It just might not be possible to construct a tent big enough to accommodate both the Ted Cruzes and the Marco Rubios.