Accessibility links
'Stand Your Ground' Laws Under Scrutiny Post-Zimmerman Verdict : It's All Politics George Zimmerman didn't invoke the stand your ground law in his trial, but in Florida and elsewhere similar self-defense measures are expected to come under heightened scrutiny. 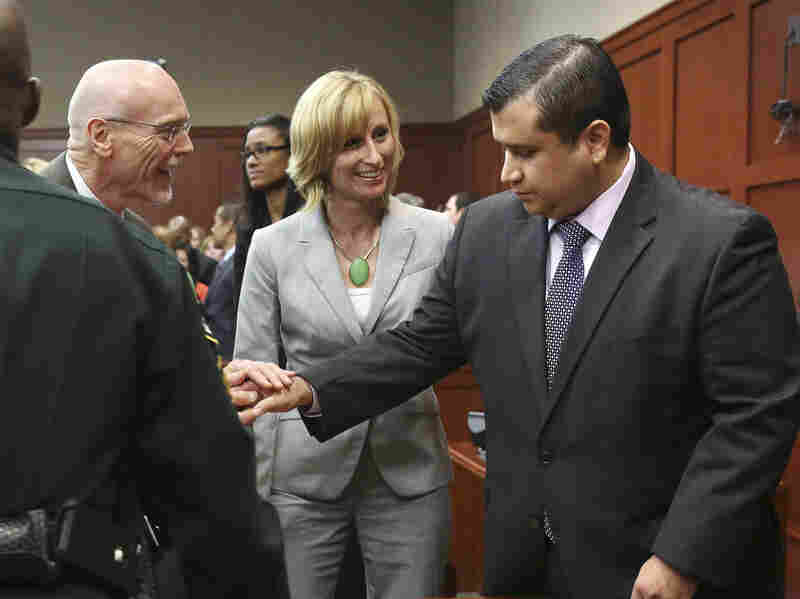 George Zimmerman (right) is congratulated by his defense team Saturday night after being found not guilty of murder in the shooting death of Trayvon Martin. Gary W. Green/AP hide caption 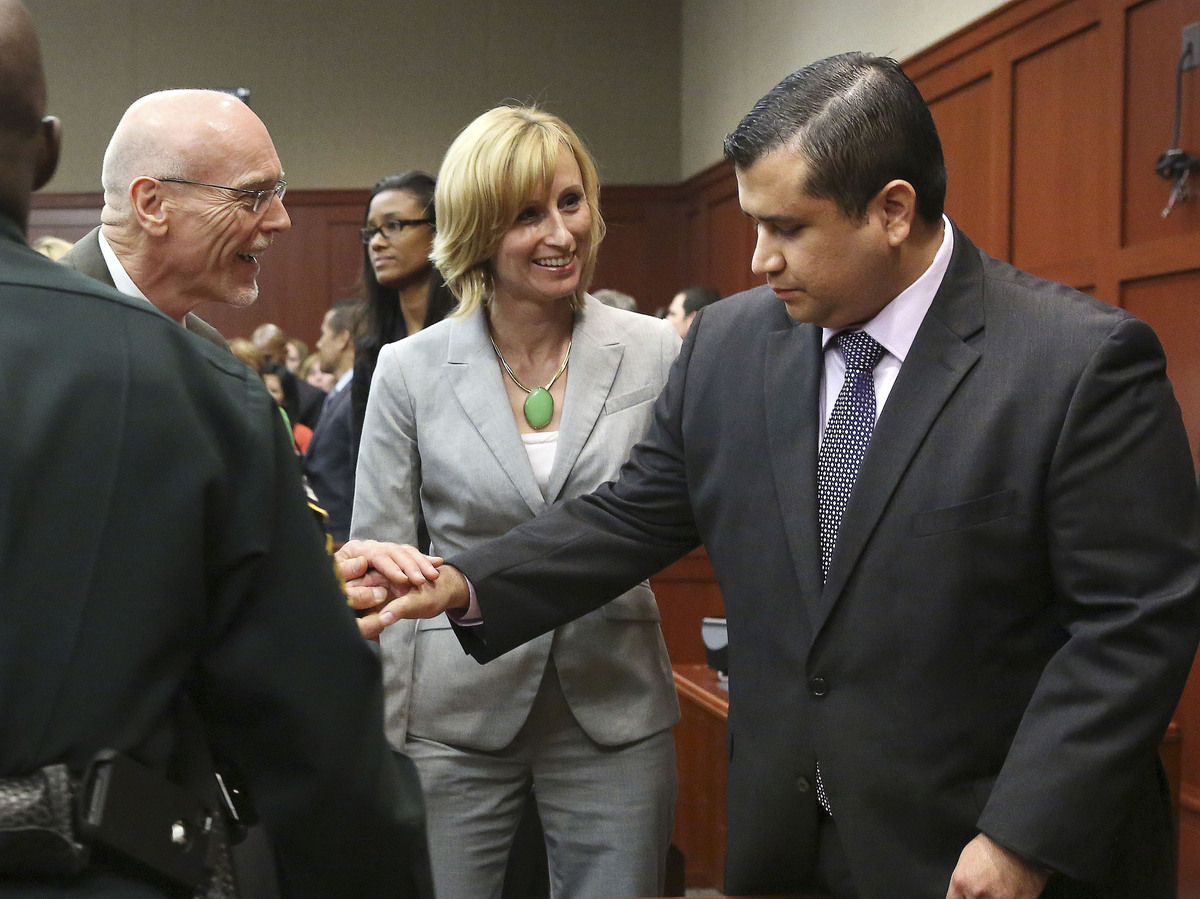 George Zimmerman (right) is congratulated by his defense team Saturday night after being found not guilty of murder in the shooting death of Trayvon Martin.

But the specter of the 2005 law loomed, inescapably, over the proceedings.

It was inevitable that the racially fraught trial would again catapult Florida's law — which extends protections for the use of deadly force far beyond the traditional bounds of one's home — as well as those in 21-plus states with similar self-defense measures into the nation's consciousness.

What it doesn't do, however, is tell us much about the path forward for stand your ground laws.

"The case wasn't decided on a stand your ground basis," says University of Florida law professor Joseph Little. "So there's not much to say about what the Zimmerman case tells us about the stand your ground law."

There's one big but, however, and that's in Florida, where Trayvon Martin's family is said to be considering a civil case against Zimmerman. (The U.S. Department of Justice is also undertaking a review of evidence in the case.)

In a civil proceeding against Zimmerman, the Martin family would have the opportunity to challenge a central, and controversial, section of Florida's stand your ground statute.

The section is titled, "Immunity from criminal prosecution and civil action for justifiable use of force."

Indeed, the section provides the opportunity for just that: a path to pretrial immunity for potential defendants who can prove in a hearing before a judge that a "preponderance of evidence" shows that their deadly or potentially deadly actions fell into the category of reasonable self-defense.

Zimmerman did not ask for an immunity hearing before his criminal trial, but that does not preclude him from requesting one if he faces a civil trial, says associate law professor Tamara Rice Lave of the University of Miami's School of Law.

At a pretrial immunity hearing, Lave says, Zimmerman would have to show a preponderance of evidence, quantified as a 51 percent burden, that he acted lawfully under the state's stand your ground statute.

Zimmerman likely didn't ask for an immunity hearing before his criminal case, she said, because he would have had the burden to prove he acted lawfully.

"When he went to trial, it was the prosecutor's burden to prove he didn't act in lawful self-defense," she said, adding: The prosecutor also had to prove to a jury Zimmerman's guilt "beyond a reasonable doubt," a far higher bar to clear than proving a "preponderance of evidence."

Little, the University of Florida law professor, argues that the immunity section of Florida law is ripe for a constitutional challenge — and that Trayvon Martin's family could mount that challenge in a civil proceeding.

The Legislature, he argues, in establishing the immunity hearing, has taken from the courts power invested in them since the state's 1968 constitution was written.

"The Legislature did not prove an overpowering public necessity for what it did, which the constitution requires," he said. "I think there's an argument to be made in a civil setting that this immunity should be rendered unconstitutional."

While Florida continues to grapple with its law, the race to adopt stand your ground-type legislation advanced by the National Rifle Association and the conservative American Legislative Exchange Council, or ALEC, appears to have slowed since Zimmerman killed Trayvon Martin.

ALEC, facing a backlash last year from its corporate supporters, abandoned its nationwide efforts to push stand your ground laws and other non-economic policy legislation.

When asked Monday about ALEC's current position, Bill Meierling, senior director of public affairs at the organization, emailed us this response:

"The American Legislative Exchange Council does not support Stand Your Ground policies. The Council focuses solely on pro-growth, economic issues to increase opportunity for all Americans."

For now, all eyes remain on Florida, where stand your ground is still standing, but where we may get a glimpse of how such laws there, and nationally, hold up under intensifying scrutiny — legal and otherwise.