Accessibility links
Unlikely Allies Shake Up Military Sex Assault Debate : It's All Politics By signing on to liberal Sen. Kirsten Gillibrand's bill to remake the military justice system, conservative Sens. Ted Cruz and Rand Paul have aggravated some in their party. 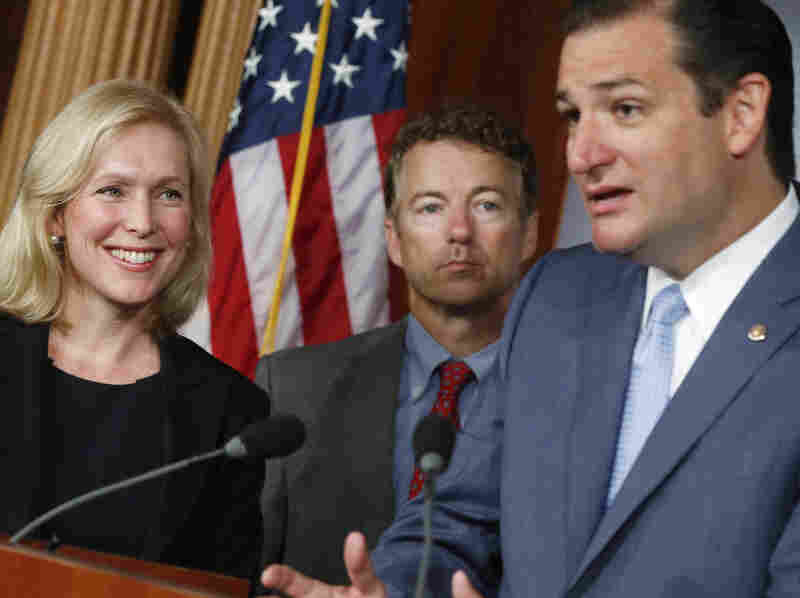 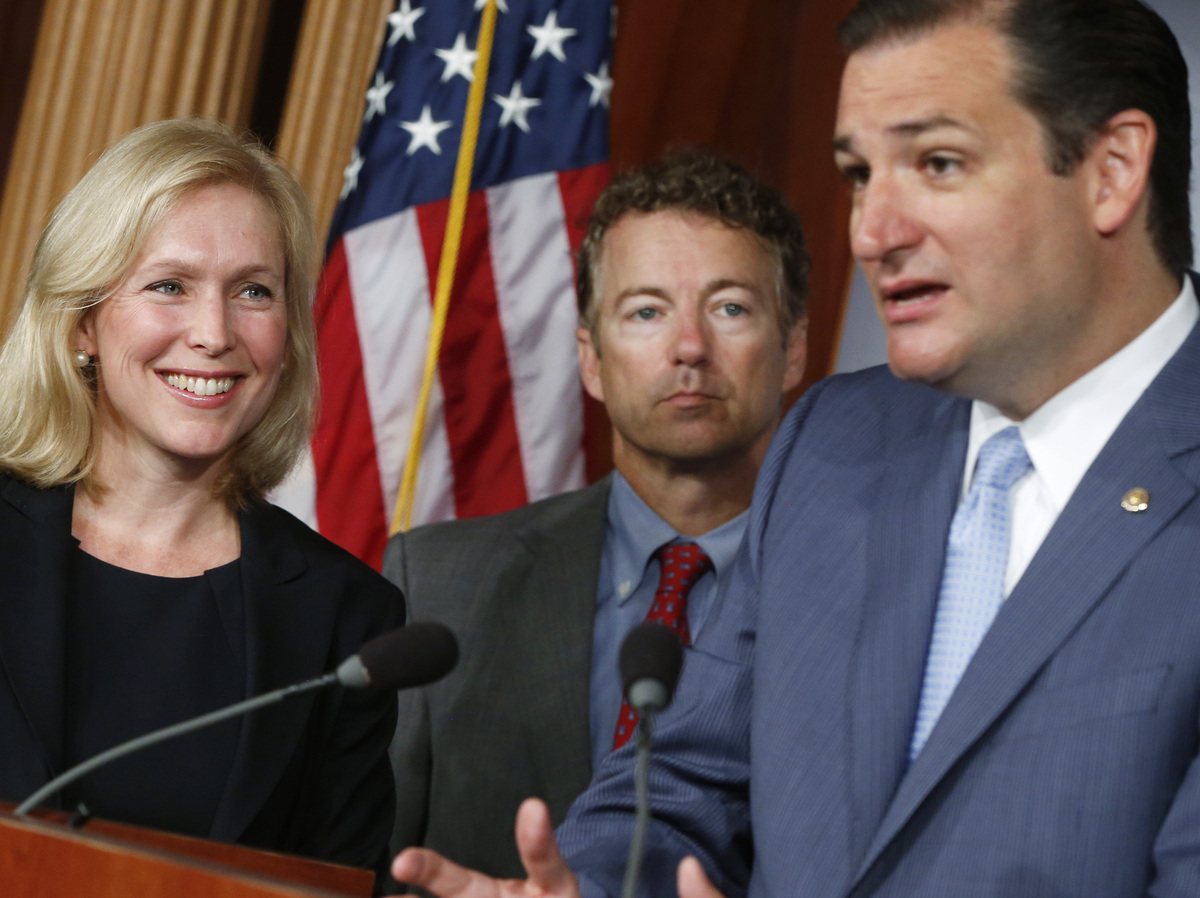 Sen. Kirsten Gillibrand, a New York Democrat, at a news conference Tuesday with Republican Sens. Ted Cruz of Texas (right) and Rand Paul of Kentucky. Paul and Cruz have endorsed Gillibrand's bill regarding sexual assault in the military.

On most recent days, nothing that wasn't bitterly partisan has seemed possible in the nation's capital.

On Tuesday, the city got its exception.

And the Senate's best frenemies, Majority Leader Harry Reid and Minority Leader Mitch McConnell stepped back from the "nuclear option" brink and struck a temporary deal on filibusters of presidential appointees.

My colleague, Frank James, looks at the filibuster deal here:

But while partisans were relieved that the Senate had, at least for the moment, managed to provide that mythic "cooling saucer of democracy," the response to Cruz and Paul's embrace of Gillibrand's bill was decidedly divided.

And the political motives of the two ascending, new-breed Republican senators, both 2016 presidential prospects who are eager to broaden their bases, were under fire from party solons.

Bill Kristol at the conservative National Review excoriated the Republican senators for joining the "anti-military caucus" and "grandstanding" for the media.

Gillibrand's bill, written in the wake of reports of a sexual assault and misconduct epidemic in the military, failed in May to move out of the Senate Armed Services Committee on which she serves. The legislation would remove the investigation and prosecution of sexual assault cases from the purview of the military brass, and create a new justice system to handle the cases.

It's a proposal that has been opposed by Armed Services Committee Chairman Sen. Carl Levin, D-Mich., the White House and military leaders.

Her proposal would need 51 votes to move to the Senate floor. Though Tuesday's developments gave the effort some momentum, it still qualifies as a steep climb. Gillibrand had rounded up 33 Senate co-sponsors, including four Republicans, before the two GOP rising stars formally signed on Tuesday.

Here's what Cruz said at the press conference with Gillibrand:

"Sexual assault is a grave violation of the duty that we owe our servicemen and servicewoman. When our sons and daughters sign up to defend our nation... they don't sign up to be potentially subject to sexual assault by their colleagues."

"All of us, Republicans and Democrats, and I think the commanders in the military," Cruz said, "want to solve the problem."

Paul added: "Some say we have no bipartisan cooperation. I disagree. This is a great example of how people from both sides come together and are willing to work on a problem."

After the press conference came this rarity: an email from the liberal Agenda Project urging progressives to give "credit where credit is due ... to Rand Paul and his Tea Party colleague Ted Cruz for doing the right thing about rape in the military."

But Kristol likened their apostasy to efforts earlier this year by both men to clarify the military's domestic drone strike policy. Paul famously filibustered for 13 hours the nomination of John Brennan to CIA director over drone strike policy, dramatically raising his national profile.

At the conservative Heritage Foundation, military expert James Carafano said that the move by Cruz and Paul had him scratching his head.

"This is a really difficult issue, and at the emotional level, these [sexual assault] stories are really gripping and very troubling," said Carafano, an expert in national security and foreign policy and 25-year Army veteran. "The impulse is to do something, but the UCMJ [Uniform Code of Military Justice] is a very, very technical matter."

Carafano argues that the commission of the sexual assault crimes, not their prosecution, is the military's defining problem. He and others are convinced that the military may not have but is capable of improving its investigation and prosecution system within the existing structure.

"They're going after the wrong problem," Carafano said, likening the position taken by Cruz and Paul, in support of Gillibrand's bill, as tantamount to blaming firefighters for the people starting the fires.

"I never talked to them about this issue; they never called me," Carafano said. "If you did your homework on this issue, you wouldn't be doing this."

Retired Army Maj. Gen. Dennis Laich, an outspoken critic of the current military system of investigating and trying sexual assault cases, says that Cruz and Paul have made a difference.

"This indicates that the issue is not dead, and that if those of us who support the bill voice our strong support, others may join Cruz and Paul," he said.

Laich pointed to what many have characterized as a sea change in Congress' relationship with the military, as illustrated by Gillibrand and other female senators' aggressive questioning of top brass at recent hearings and by a handful of Republican senators who have bucked party orthodoxy on sexual assault remedies, drones and military spending.

"It may indicate that after the 'buzz' of all the four-stars sitting in front of Congress and offering their sanctimonious pronouncements of a commitment to fix the problem, these two senators may have looked at the performance of the chain of command over the past 30 years and realized that they have forfeited their right to retain UCMJ authority over these crimes," Laich said.

"What makes any rational person think they are right on this issue?" he said.

Whatever the motives of Tuesday's move by Cruz and Paul, it undoubtedly serves as a reminder that an emerging class of new senators from both parties are changing the terrain in the nation's capital in ways that just a handful of years ago would have seemed unimaginable.