Accessibility links
As His Campaign Craters, Weiner Picks Fight Over Flight : It's All Politics Why does Anthony Weiner keep going? Even with his campaign engulfed in scandal and embarrassment, the former congressman's frenetic energy and hunger for the spotlight remain powerful forces.

As His Campaign Craters, Weiner Picks Fight Over Flight

As His Campaign Craters, Weiner Picks Fight Over Flight 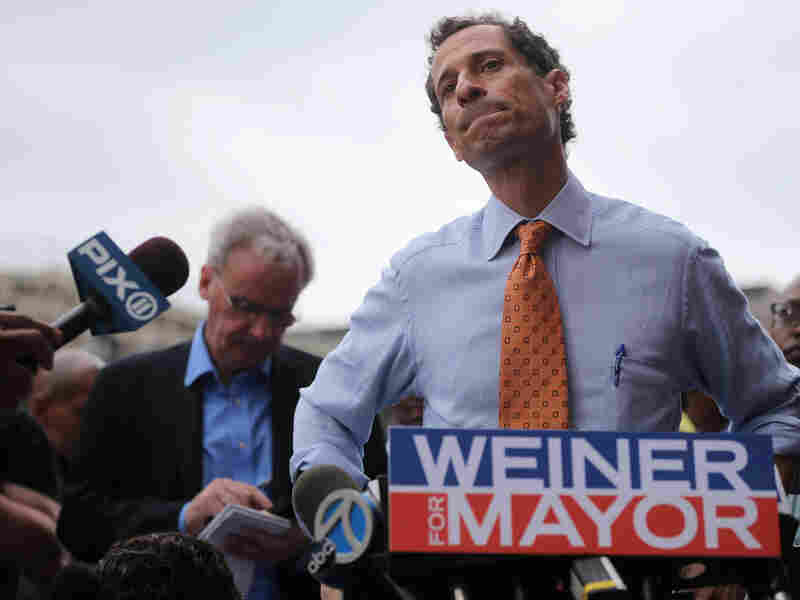 Anthony Weiner listens to a question from the media after courting voters outside a Harlem subway station in May. Mario Tama/Getty Images hide caption 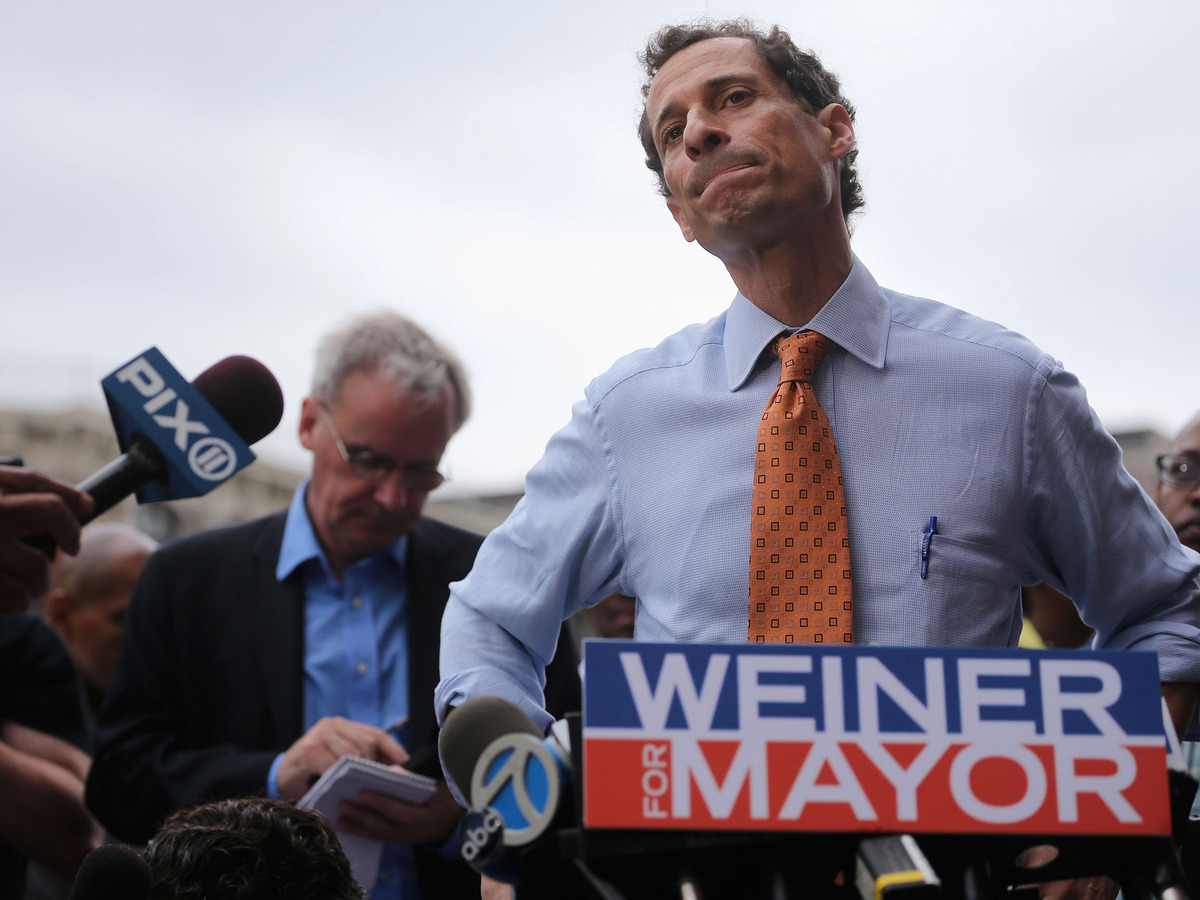 Anthony Weiner listens to a question from the media after courting voters outside a Harlem subway station in May.

Back in the day, when Anthony Weiner was still a youthful Democratic representative from Brooklyn, before the dirty texts and the penis photos chased him from Washington, before his scrabbling, sinking campaign for New York City mayor, he strove to emulate his predecessor.

Chuck Schumer's frenetic energy and press-grabbing devotion to his constituents provided the model that Weiner followed when his longtime mentor moved on to the U.S. Senate. Former staffers almost universally describe Weiner as a demanding, New York-focused boss who kept them burning the midnight oil and running at a breathless pace that led to frequent staff turnover.

That same approach — a constant state of hyperdrive and a hunger for the spotlight — may explain more than anything else why Weiner, 48, can't seem to say "uncle" in a mayoral campaign that has taken on a monumental weirdness.

The latest debacle? In an interview Tuesday, his spokeswoman, Barbara Morgan, used a series of crude terms for female genitalia to describe a former campaign intern who wrote a mild "tell all" story for the New York Daily News.

Ex-intern Olivia Nuzzi's big revelation: Some people wanted to work on the former congressman's mayoral campaign as a means of burrowing into Clinton world through Weiner's wife, Huma Abedin, a longtime aide to Hillary Clinton.

Now, Clinton world may have had it with him, Abedin may be taking extended vacation time from her job as chief of Hillary Clinton's transition office, and his campaign manager may have quit, but Weiner keeps going.

"I am not terribly interested," he said Monday, "in what people who are not voters in the city of New York have to say." That's a reference, of course, to his wife's boss, herself a potential presidential candidate, and former President Bill Clinton, who officiated at the Weiner-Abedin nuptials three years ago.

Numerous recent reports suggest the Clintons are angry with Weiner both for his indiscretions and for comparing his troubles to the Bill Clinton sex scandal of the late 1990s.

While there are also reports of grumblings among Clinton loyalists about being hit up for more money to sustain Weiner's campaign, those familiar with his mayoral run say the complaints are overstated and that he has the funds to get through the final weeks should he stay in.

"Quit isn't the way we roll in New York City," a measured but defiant Weiner says in a new online ad. "We fight through tough things."

Weiner no doubt hopes that voters, even given the little time left before the Sept. 10 primary, will be persuaded to view his personal failure in a different context.

After all, as some voices have argued, it wasn't extramarital sex with a real prostitute, as in the cases of Republican Sen. David Vitter of Louisiana or former New York Gov. Eliot Spitzer, another disgraced Democrat seeking a return to the public arena by running for New York City comptroller.

On the other hand, will New York voters continue to see Weiner as CBS News' Bob Schieffer views him — as "a new age flasher"?

The relationship between Weiner and Schumer, who as a representative hired Weiner out of college and nurtured his political career, has cooled. The senator has refused to comment on Weiner's ongoing candidacy and the salacious controversy surrounding it.

And no one, except perhaps Weiner, knows whether there are more Sydney Leatherses out there waiting to share their stories of exchanging dirty texts and photos with the former congressman. Leathers, whose emergence last week forced Weiner to acknowledge that his sexting behavior continued after his 2011 resignation from Congress, told radio shock jock Howard Stern this week that she's considering an offer to star in a sex parody movie.

As Weiner's comeback from infamy sinks into ignominy, those who knew him during his dozen years in Washington are privately expressing bafflement and disappointment. But some are also quietly pushing back on characterizations of their former boss as a show horse, rather than a workhorse.

A Bottomless Talent For Self-Sabotage

Most of his dozen years in Congress were spent in the minority as a rank-and-file Democrat, one who became a voice for single-payer health care, for issues specific to New York, and who was singularly uninterested in the cozy, incestuous Washington scene described in the much talked about recent book This Town.

Says one former staffer: "If you were working for him, you were not getting invited to the White House Correspondents Dinner."

Weiner's days are likely numbered, and it's unclear whether the end will come before the September primary. The candidate's ability for self-sabotage seems bottomless.

But the Anthony Weiner who spent a dozen years in Washington is not known for giving up a fight. Even, it seems, one as humiliating and damaging as this.