Accessibility links
On The Road With Max And Dave: A Tax Overhaul Tour : It's All Politics Sen. Max Baucus and Rep. Dave Camp skip much of Washington's formality when they're out traveling the country to try to drum up support for simplifying the tax code. They want to convince Americans — and their colleagues in Congress — that it's possible, and worth it. 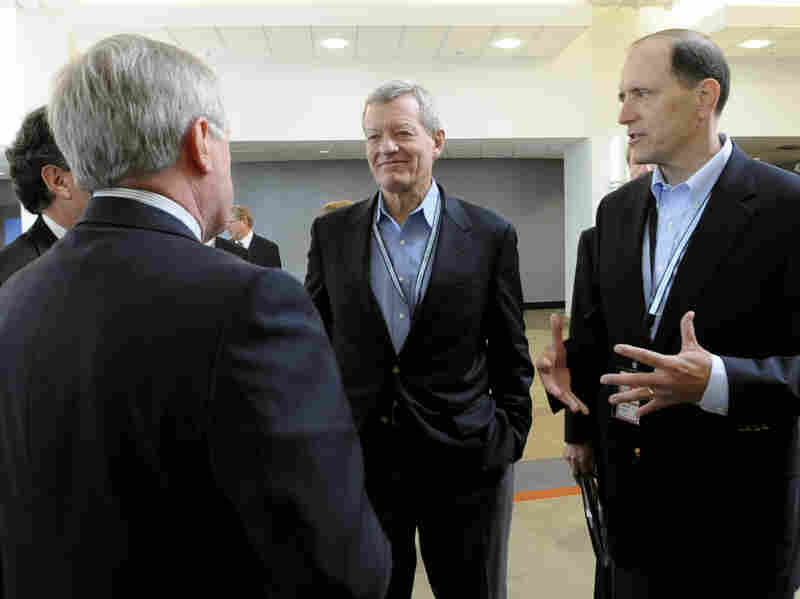 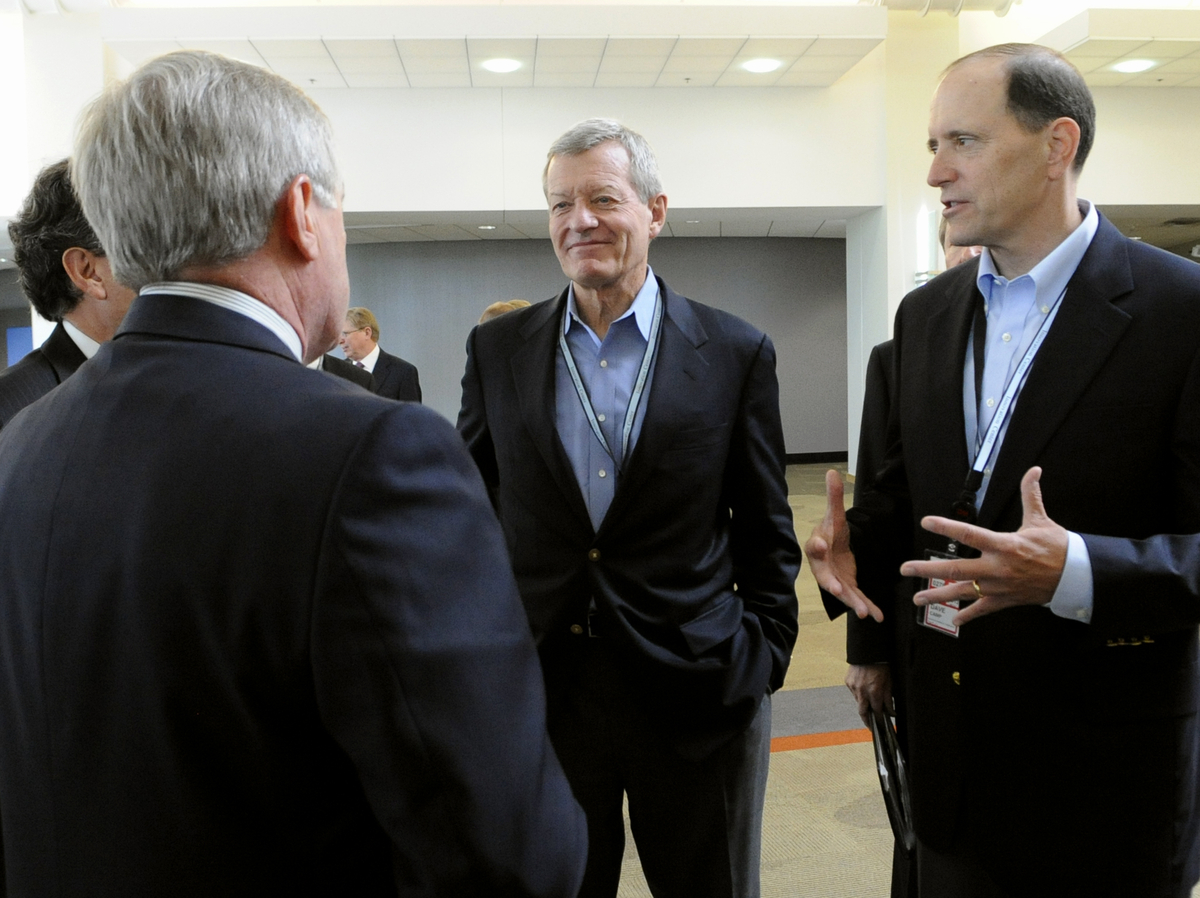 Ask Americans about the most pressing concerns for the nation, and overhauling the tax code probably isn't all that high on the list — that is, unless those Americans happen to be Rep. Dave Camp, R-Mich., and Sen. Max Baucus, D-Mont., the chairmen of the congressional tax-writing committees.

The two lawmakers are on a mission to simplify the tax code.

When they're out on the road selling that tax overhaul, they don't wear ties and they skip much of the formality of Washington — like last names even. Just call them Max and Dave.

On a recent Monday morning, they found themselves in Debbie Schaeffer's appliance store in New Jersey, Mrs. G TV and Appliances. After looking over some high-end ovens, the chairmen sat down with Schaeffer at a faux kitchen island near the front of the store to talk taxes.

Welcome to the tax overhaul road show — the public part of Max and Dave's bipartisan push for a fairer, flatter, simpler tax code. Their leading question to the business owners and taxpayers they visit is: Wouldn't it be better if the tax code were simpler?

In Schaeffer's case, Baucus asks her about getting rid of a bunch of deductions. That would mean lower tax rates, he says, maybe even a top rate as low as 25 percent.

"You'd pay a lower rate," he says. "Is that an approach that makes sense?"

Schaeffer says it is. Then comes the "but."

A Bipartisan Duo Takes Tax Pitch On The Road

"It's going to be very hard to wipe out all deductions, but if there is a compromise to get rid of some of the ones ... that don't affect me," she says, that would be good for both her and her business.

Therein lies the rub. People, corporations and interest groups all say: "Sure, get rid of tax breaks — just not mine."

A Bumpy Road Ahead?

The next stop on the tour takes Max and Dave to the dining room table of retired CPA Scott Stevens.

Stevens shared his story using a website the chairmen set up to get regular people involved in overhauling the tax code. Thousands of people have written in, but Stevens' letter stood out. He complained that his daughter, who has her own photography business, pays a higher tax rate than hedge-fund managers.

When the lawmakers ask Stevens if it's worth all the trouble to change the tax code, Stevens says: "I do. I think it's worth the effort."

Stevens also wishes them luck. And they're going to need it.

On the road, Max Baucus and Dave Camp play down their partisan differences, stressing the common goal of simplifying the code. But back on Capitol Hill, when party leaders talk about a tax overhaul, they talk about revenue, bringing the divisions into bright focus.

"We're going to have to have significant revenue, period," Senate Majority Leader Harry Reid, D-Nev., has said. His idea of tax reform is getting rid of deductions to bring more revenue into government coffers.

And for Minority Leader Mitch McConnell, R-Ky., that's a nonstarter. "It's not about raising revenue for the government," he says. "So, yeah, I think we have a real stumbling block here, in trying to figure a way forward."

'There's Going To Be Compromise'

So, do Camp and Baucus talk about these differences? And doesn't it raise questions about their chances for success? 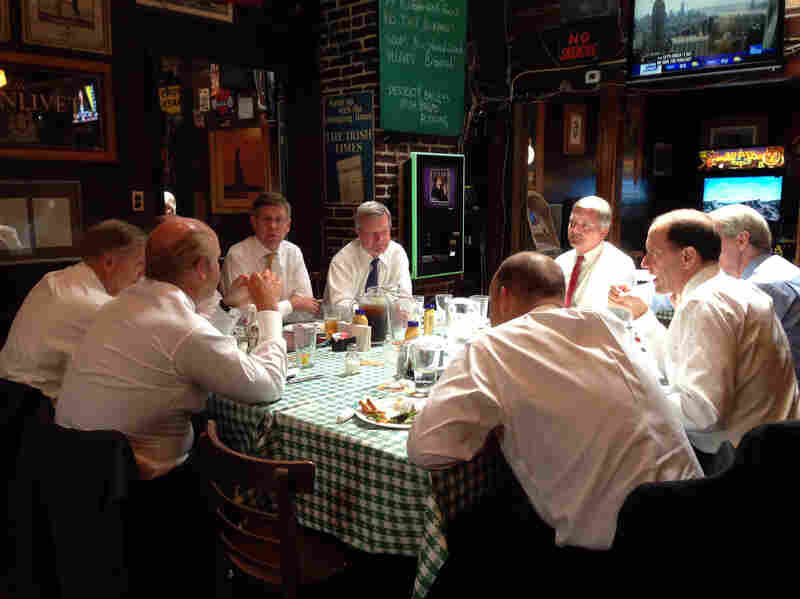 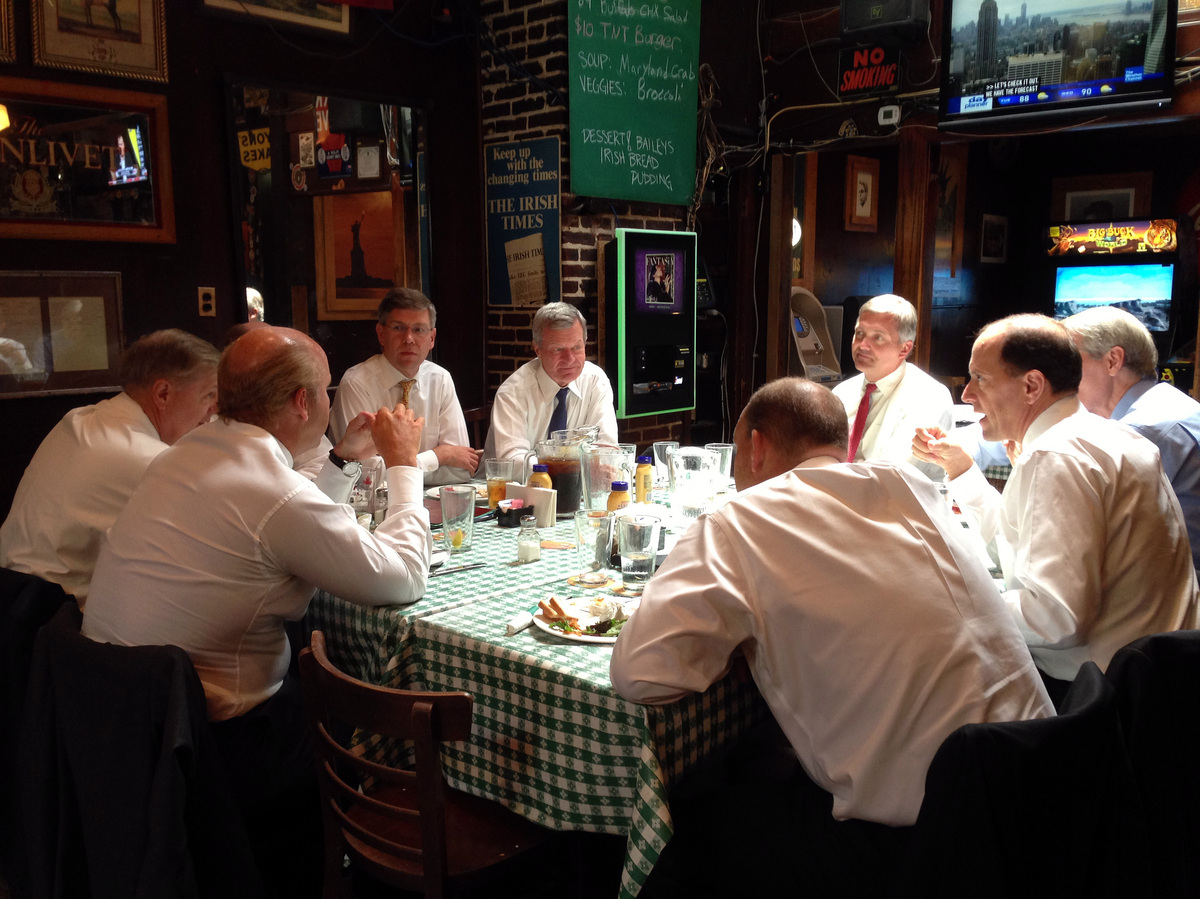 Lawmakers meet to discuss an overhaul of the tax code at Kelly's Irish Times on Capitol Hill.

"We talk about it," Camp says.

"We talk about it frequently," Baucus adds. "But we also know that that issue is going to get worked out. There's going to be compromise. In the meantime, let's work to get the code in much better shape."

And then, as often happens with these two, Camp chimes back in: "I don't think we'd be doing our job if we started off with saying, 'Well, we don't agree on something, so let's just stop.' And, clearly, I think if we can get the right policy, that's what we really need to look for. And so that's why we're doing these tours."

And that's why, every couple of weeks, they gather for what they call a "two-pitcher lunch" at Kelly's Irish Times, a Capitol Hill pub. There's beer and soda and burgers, along with a bipartisan mix of about a dozen senators and representatives.

They're laying the groundwork, building the relationships. And they're paying homage to the last time Congress passed a major overhaul of the tax system, back in 1986. That plan was hatched over two pitchers of beer at Irish Times.