Accessibility links
4 Years After Fiery Town Halls, Activists Try To Revive Spark : It's All Politics In the summer of 2009, protests of the president's health care agenda boiled over in town hall meetings around the country — marking the rise of the Tea Party movement. Now, groups from all over the political spectrum are hoping to recapture some of that energy. 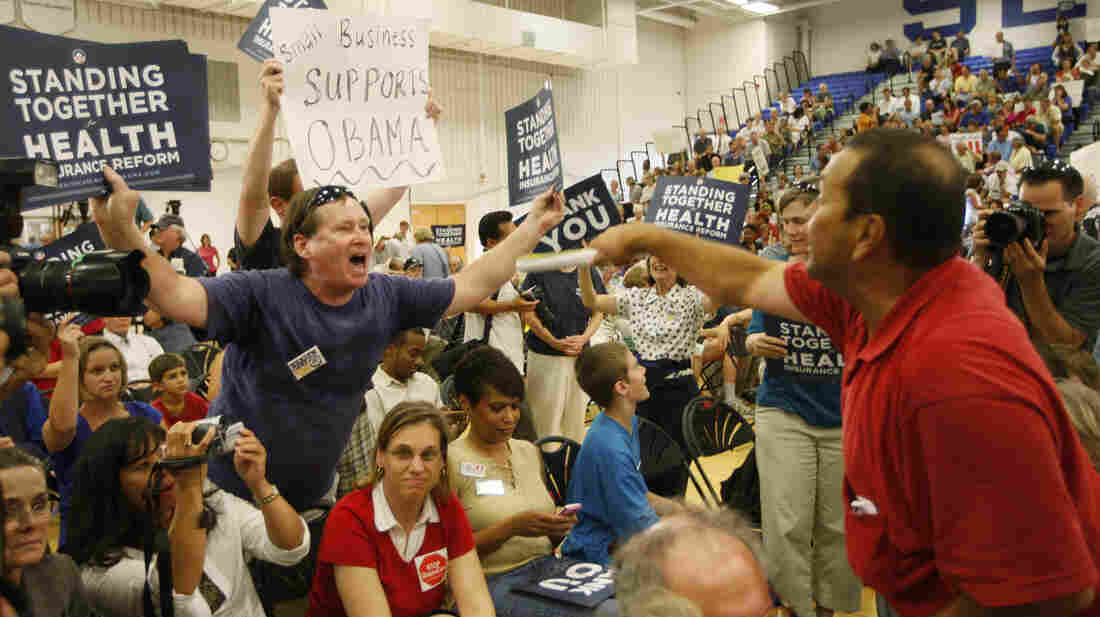 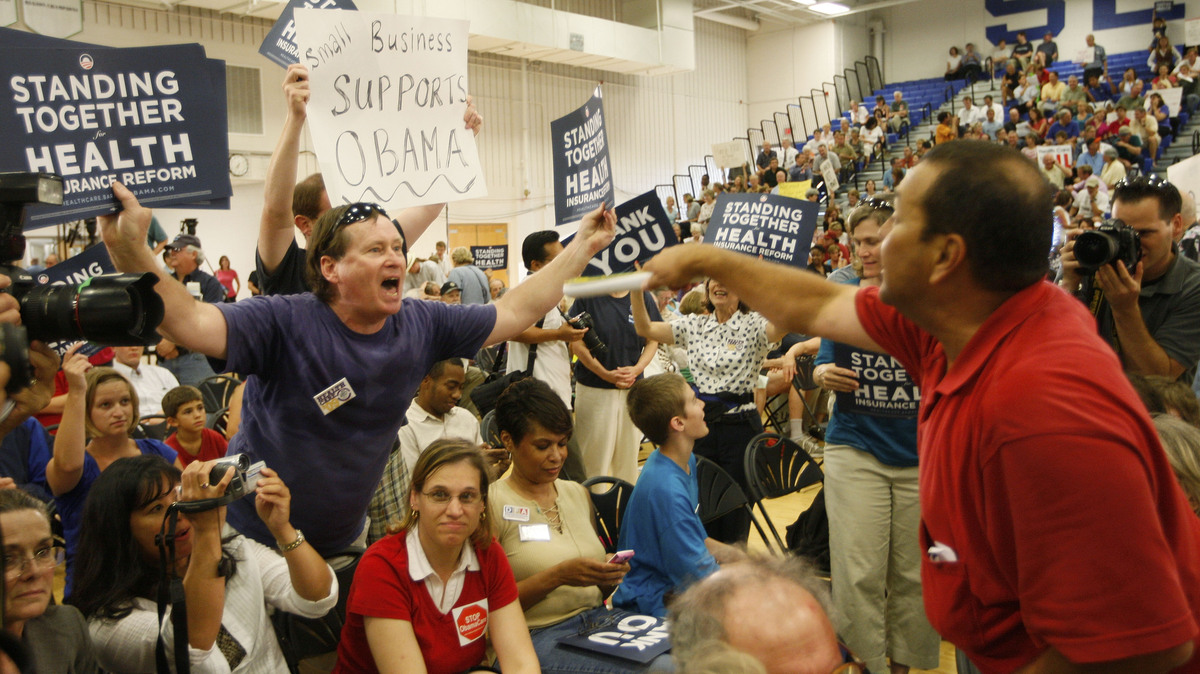 It's been four years since protests of the president's health care agenda boiled over in town hall meetings around the country.

The summer of 2009 marked the rise of the Tea Party movement and set in motion the GOP takeover of the House of Representatives the following year.

Groups from all over the political spectrum are hoping to recapture some of that energy this month.

Before August 2009, town hall meetings — gatherings where members of Congress check in with constituents back home — used to be guaranteed snoozers.

But in Michigan that month, Rep. John Dingell, a Democrat, was confronted by a man who pushed his disabled son's wheelchair up to the podium.

"You are a fraud, and you're sentencing this person to death under the Obama plan," the man said. 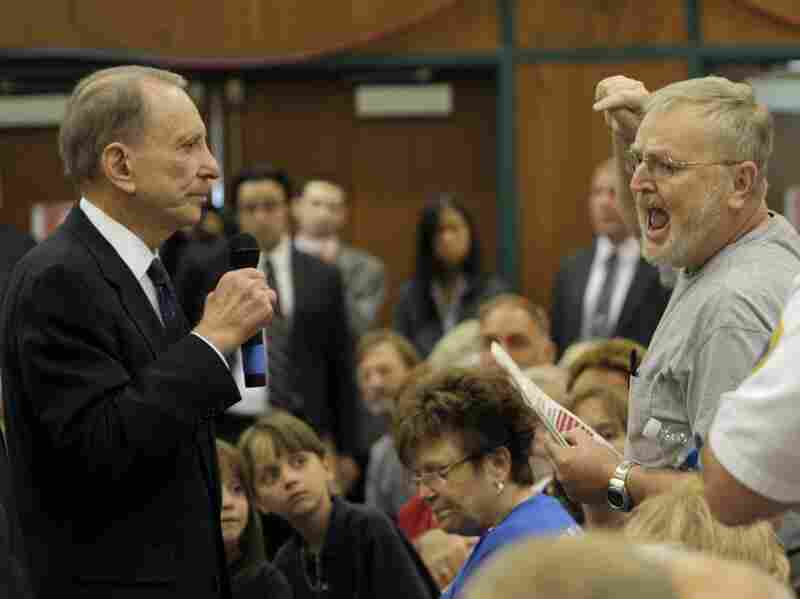 Democratic Sen. Arlen Specter listens to a man voice his complaints during a town hall meeting on Aug. 11, 2009, in Lebanon, Pa. Specter was voted out of office the following year and died in 2012. Bradley C. Bower/AP hide caption 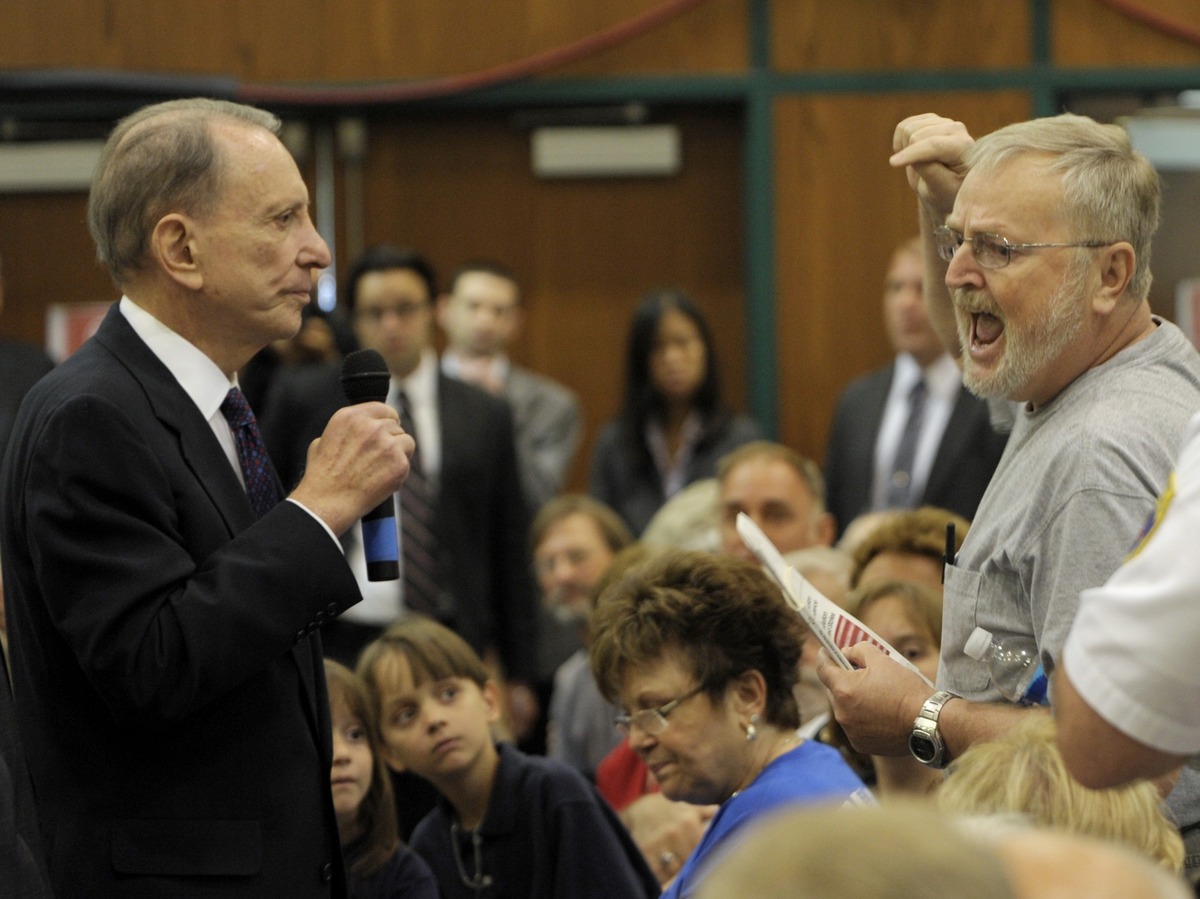 Democratic Sen. Arlen Specter listens to a man voice his complaints during a town hall meeting on Aug. 11, 2009, in Lebanon, Pa. Specter was voted out of office the following year and died in 2012.

In Florida, an overflow crowd chanted, "Hear our voice!" outside of Rep. Kathy Castor's town hall meeting. Inside, it was just as chaotic as the Democrat struggled to talk over chants and jeers.

And at a meeting in Pennsylvania, then-Sen. Arlen Specter, who had earlier switched to the Democratic Party, was essentially told he was going to hell for supporting the president's health care plan.

Clips from these events replayed on YouTube and cable news throughout the August recess.

Mike Wagner, an assistant professor in the School of Journalism and Mass Communication at the University of Wisconsin, says the shoutfests "really helped create the impression that the public en masse had reached a boiling point."

"It was the case that a lot of people had reached a boiling point, especially members of the Tea Party," he adds, "but there were plenty more people who were not enraged in the summer of 2009."

Those people, however, don't tend to show up at town hall meetings, Wagner says.

"There's an incentive for people at these meetings to vilify their congressperson or the president when cameras are present because it increases the chances of getting covered, which can help shape the narrative about how the public feels about an issue," he says.

And shape it they did. Activists mostly targeted Democrats who supported the president's health care plan — some of it was orchestrated by conservative organizers, but much of it was spontaneous and visceral.

Ultimately, Congress did pass the Affordable Care Act, without a single Republican vote. Castor, Dingell and Specter all voted yes. Specter was defeated the following year, and the Democrats lost their majority in the House.

"We kind of had our head handed to us in 2009," says Brad Woodhouse, president of Americans United for Change, a Democratic group. He says he believes the energy and organization that developed around the town halls "contributed to the Republicans' win in 2010."

But this time it will be different, Woodhouse says.

"One thing that 2009 taught us was: We're not going to be surprised again," he says. "And, in fact, we think the surprise factor has been taken out of this."

A website for Woodhouse's group, Accountable Congress, lists dozens of Republican town hall events and offers activists possible questions to ask at those meetings about the budget, immigration, gun control and Obamacare.

"We're fine if you see us coming, but ... get ready because we're coming," Woodhouse says.

The Tea Party groups are back this August as well.

But this time, in most cases, their targets are Republicans. Matt Kibbe, president of FreedomWorks, says his group has its own website for the recess. He says a lot of representatives are ducking by not having town halls, or are keeping them on the down low.

"We're trying to crowdsource that information," Kibbe says. "We're asking citizens in the various congressional districts and states to call the offices and find out where the meetings are, [and] post it back on our website so that everybody can have access to that."

Health care is still the top issue on FreedomWorks' agenda. Crucial parts of the law are scheduled to be up and running this fall — meaning the time is now for one last stand.

And Tea Party activists are pressing Republican lawmakers to block any bill funding the federal government unless it also defunds Obamacare.

Already, it has come up at a handful of town halls — including one in Charlotte, N.C., on Monday.

"This is what the Tea Party wants to know," a member of the audience said to Republican Rep. Robert Pittenger. "Will you vote ... to defund Obamacare, yes or no?"

Pittenger answered no — and let's just say it didn't go over real well.

It's not yet 2009, but it's also clear a lot of town halls this August won't be snoozers.