Accessibility links
2014 Senate Math Favors Republicans But Primary Battles Loom : It's All Politics To win a Senate majority in 2014, the GOP will have to avoid primary election sideshows that in recent years led to the nomination of seriously flawed candidates. 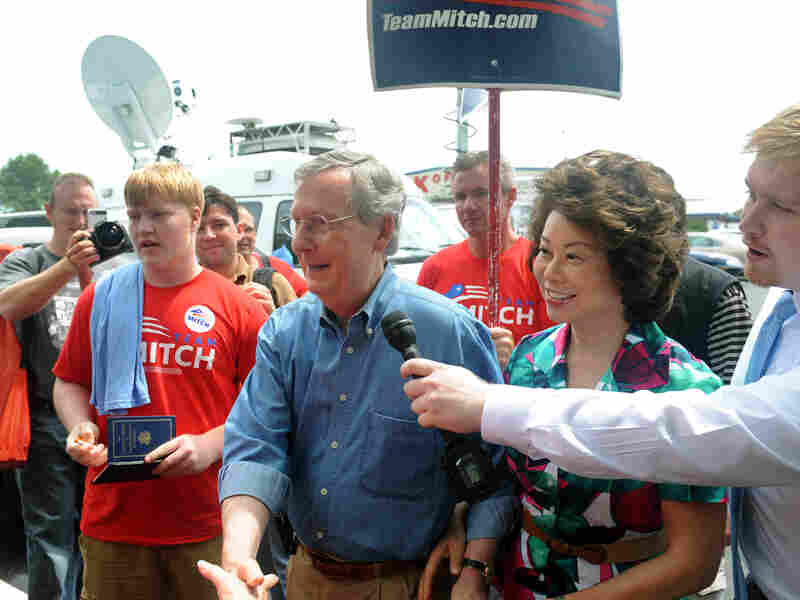 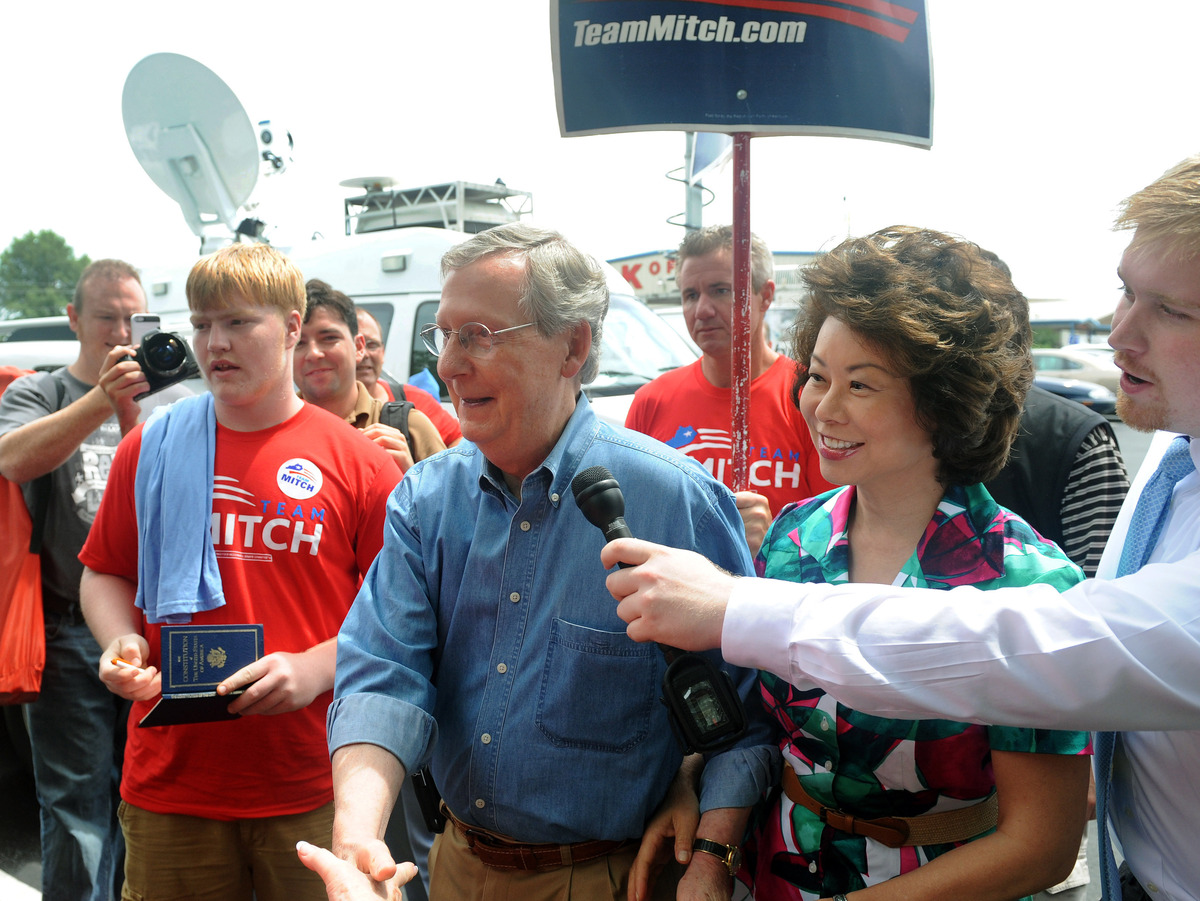 Republican dreams of a U.S. Senate takeover have been shattered in recent elections by a collection of "unelectable" nominees — the term of art used by political pros to refer to not-ready-for-prime-time candidates whose extreme views doomed their chances with mainstream voters.

There was Delaware's Christine "I'm Not A Witch" O'Donnell, and Nevada's Sharron "Some Latinos Look More Asian To Me" Angle in 2010.

The very winnable general election races they bungled after capturing party primaries have left the GOP still in need of a half dozen more seats to wrest Senate control from Democrats.

Working in Republicans' favor during the 2014 election cycle? The math.

There are 20 Democratic and 15 Republican seats in play, and, at this point, the seats in danger of flipping are almost all Democratic.

A growing consensus is that the four most winnable-for-Republicans races include, for the moment, South Dakota, Montana, and West Virginia, where Democratic senators are retiring; and Arkansas, where Democratic Sen. Mark Pryor is the party's most vulnerable.

No Republican-held seat appears to be flippable yet, with the exception of New Jersey, which will likely revert to Democratic control in an October 2013 special election. A Republican appointee has briefly held the New Jersey seat left vacant by the death in June of Democratic Sen. Frank Lautenberg.

With candidate filing deadlines still months away, at the moment it's too early to come to any conclusions. At least one polarizing figure has returned for another Senate run: Joe Miller, the Tea Party-backed candidate who knocked off Sen. Lisa Murkowski in the 2010 Republican primary but lost to her write-in bid in the general election, has indicated he'll run in Alaska.

If 2014 turns out to have a dearth of outside-the-mainstream primary candidates, partly it will be a function of the lack of moderate Republicans left to target.

"The incumbents now are generally not likely to be knocked off in the party because of the care they have taken to be sure they won't," says Ron Rapoport, co-author of Three's A Crowd: The Dynamic of Third Parties, Ross Perot and Republican Resurgence. "I think the Republican Party has moved to Tea Party positions, and the challenges are going to be less strong."

An exception to Rapoport's theory can be found in Kentucky. That's where Senate Minority Leader Mitch McConnell, increasingly unpopular back home, is facing a primary challenge from Tea Party candidate Matt Bevin.

McConnell no doubt thought he could sidestep such a challenge last fall when he hired as his campaign manager Jesse Benton, who ran Rep. Ron Paul's 2012 presidential operation.

Benton was also a strategist for Ron Paul's son, Rand, during his successful 2010 Tea Party primary challenge and ultimate Senate win in Kentucky.

Questions of Benton's loyalty were raised Thursday, however, after the libertarian-leaning Economic Policy Journal reported that Benton in January essentially said his heart wasn't in it for McConnell — he took the job only because it would ultimately benefit Rand Paul.

The journal reported that, in a recorded conversation, Benton said this: "Between you and me, I'm sorta holdin' my nose for two years, cause what we're doin' here is gonna be a big benefit to Rand in 2016, so that's the long vision."

Bevin's challenge to McConnell is why analysts like Nathan Gonzales of The Rothenberg Political Report suggest that Kentucky, along with Georgia, presents the "only two offensive opportunities for Democrats."

Gonzales says that Kentucky's Democratic Senate candidate, Alison Lundergan Grimes, "has a shot because of Mitch McConnell's unpopularity, although the fundamentals of the state and the president's unpopularity could bail out McConnell in the end."

"This is a far bigger race that Grimes has ever had before, when she's basically just outspent her opponents," he said. "That wouldn't happen this time."

Gonzales argues that McConnell's vulnerability is greater in the general election than it is against Bevin in the primary.

McConnell isn't the only conservative whose ideological credentials are under attack from within the party. Sen. Lindsey Graham in South Carolina could face three challengers; Wyoming Sen. Mike Enzi is expected to face Liz Cheney, daughter of former Vice President Dick Cheney, in a primary.

Then there's Texas Republican Sen. John Cornyn, considered one of the Senate's most conservative, who is closely watching his right flank — last month he hired a prominent tea party organize to manage his reelection campaign.

Even so, it was reported this week by the conservative National Review, Tea Party activists have been encouraging Rep. Louie Gohmert, a conservative lightning rod, to challenge Cornyn in a March 2014 primary.

Gohmert, famous for linking both same-sex marriage and gun control to bestiality, and other incendiary comments, so far has demurred.

"The overarching theme right now is whether history is going to repeat itself," says Gonzales. "There's a temptation to say that we've seen a cycle like this before, where Democrats are defending more seats, and where the Republican Party has imploded in the primary."

Lay of the Land

The analysts at Rothenberg, and at the Cook Political Report, another political handicapper, seem to agree that the most vulnerable incumbent senators are McConnell and Pryor. The Arkansas Democrat faces a formidable challenge from GOP Congressman Tom Cotton, an Army veteran and former management consultant who seems likely to avoid a divisive primary.

The retirements of Democratic Senators Tom Harkin of Iowa and Carl Levin of Michigan mean that open races for those seats could be competitive. Of special concern on the Democratic watch list are the seats currently held by Senators Mark Begich of Alaska, Mary Landrieu of Louisiana, and Kay Hagan of North Carolina.

In these close races, any issue could make the difference, including Obamacare, which national Republicans are making the centerpiece of their election efforts.

"The administration's pushing off of major implementation of parts of the health care bill until after the 2014 election is telling," Gonzales says. "I think that takes some of the specific impact out of the issue, but it's still going to be one of the main topics."

Republicans have the potential to overplay their hand on health care opposition, he says, but "Democrats are probably too optimistic about its popularity."