Accessibility links
GOP Debate: Is Obamacare Fight Worth A Government Shutdown? : It's All Politics Some GOP lawmakers want to block all money for Obamacare in a stopgap spending bill that must be approved next month to prevent the government from shutting down on Oct. 1. But other Republicans say that won't work and may well backfire. 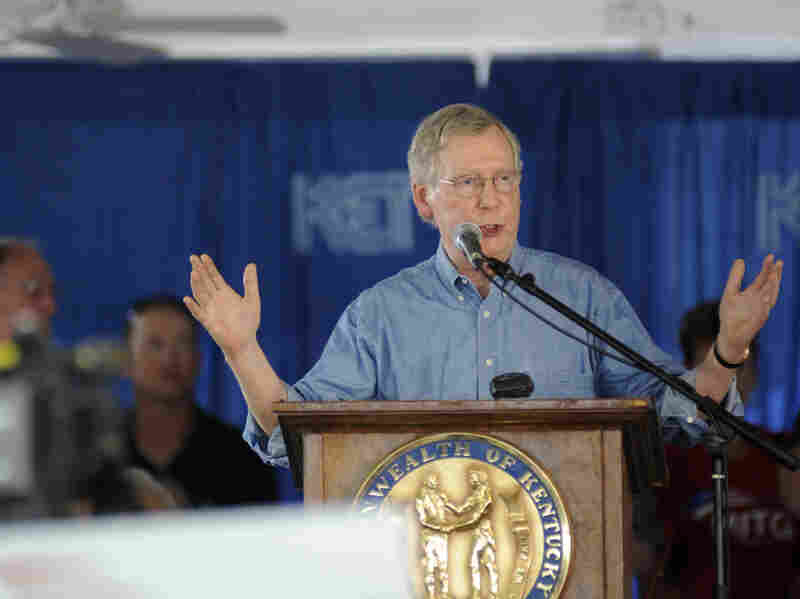 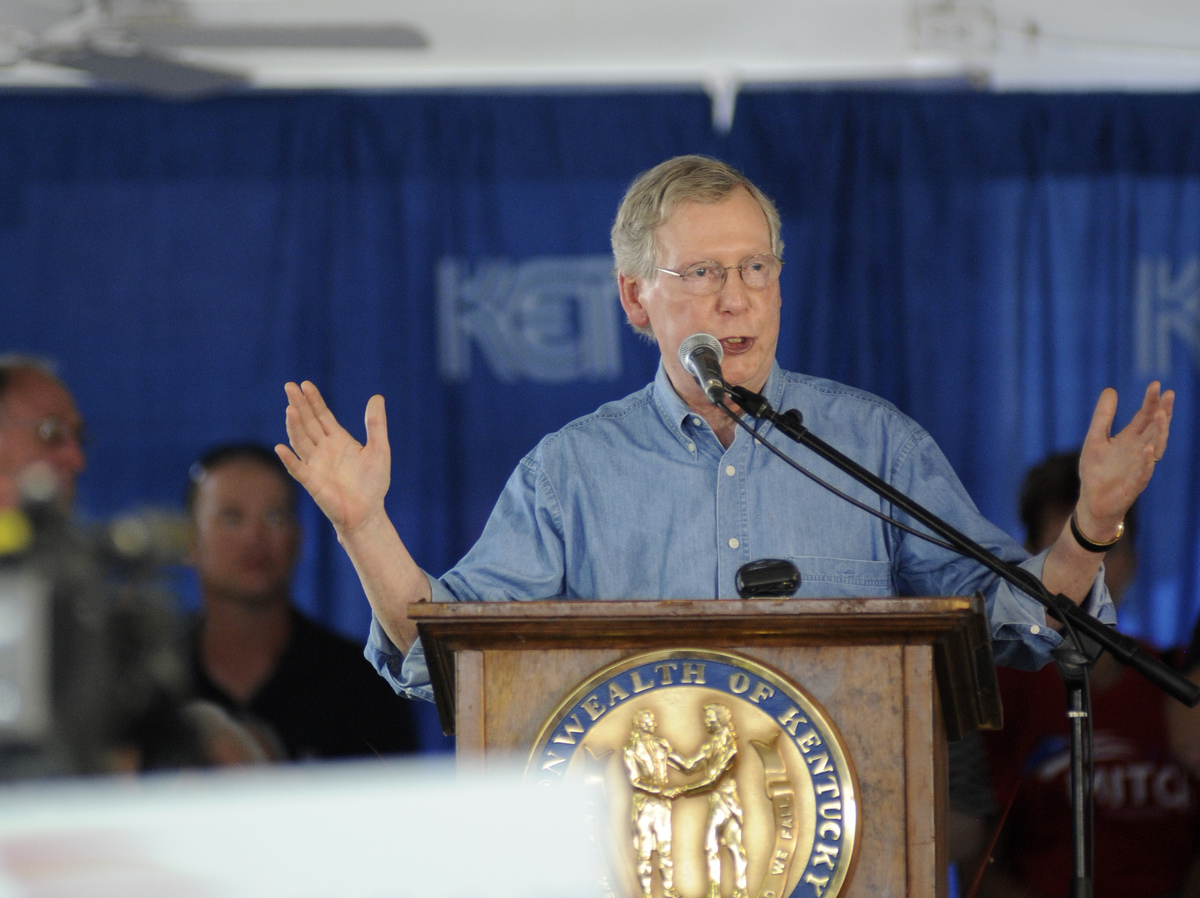 Sen. Mitch McConnell, R-Ky., speaks during the 133rd Annual Fancy Farm Picnic in Fancy Farm, Ky., on Aug. 3. McConnell said this week that using a big spending bill to defund Obamacare is not the way to go.

Congressional Republicans agree that the new federal health care program should be ended. But they are finding themselves bitterly divided over how.

They have tried dozens of times to repeal it. Now, some GOP lawmakers want to block all money for Obamacare in a stopgap spending bill that must be approved next month to prevent the government from shutting down on Oct. 1. But other Republicans say that won't work and may well backfire.

Back home in Texas for the August recess, Republican Rep. Blake Farenthold confronted the issue at a recent open house in his Corpus Christi office.

Specifically, the second-term congressman was asked whether he would vote to defund Obamacare in the temporary measure to keep the federal government running.

The reply from Farenthold, who has had strong Tea Party backing, was just a tad hesitant: "I'm not sure how effective defunding will be, but I'm going to do my best. It's my responsibility as a member of Congress to mitigate the damage from what I think is a bad law, so if defunding is a way to do that, I'm going to vote to defund it."

House GOP leaders fear Republicans would take the blame if that leads to a government shutdown. But defunding advocates say public opinion is on their side.

On Wednesday, the conservative group Heritage Action released a poll conducted in 10 Republican-leaning districts. Heritage's Michael Needham said it showed that nearly three-fifths of those surveyed approve of a shutdown, which was described in the poll's question as "a temporary slowdown in non-essential federal government operations."

"What the voters are demanding, what they've been demanding for years, is political courage," said Needham. "And that's been lacking in Washington, D.C., and I think that we've been very pleased with what we've seen at the town halls."

Indeed, earlier this month, at the same Kentucky church picnic where Senate Republican leader Mitch McConnell launched his re-election campaign, Tea Party-backed challenger Matt Bevin chided McConnell for not signing a letter that 13 other GOP senators have signed that promises to defund Obamacare in the stopgap spending bill.

"We hear a lot of empty rhetoric from Mitch McConnell about ending Obamacare," Bevin said. "Obamacare is unpopular. Stop talking about yanking it out root and branch, and start voting in the U.S. Senate to kill it by defunding it. Stand with Sen. Mike Lee [the Utah Republican leading the defunding charge] — be a man, stand up and put your money where your mouth is."

But veteran Kentucky political analyst Al Cross predicted that the letter pledging to defund Obamacare would not get McConnell's signature.

"I can't see him signing onto that because he surely believes, as most Republicans do, that would be political suicide to shut down the government," Cross said. "But he's got to find a way to finesse that."

After weeks of dodging questions about where he stood on defunding Obamacare, McConnell did tell WYMT-TV in Corbin, Ky., on Tuesday that using a big spending bill to defund the program was not the way to go.

"The problem is, the bill that would shut down the government wouldn't shut down Obamacare," he said. "Most of it is permanent law and not affected by that."

That puts McConnell at odds with the Tea Party-aligned senators behind the defunding pledge letter, including Texas Republican and presidential hopeful Ted Cruz.

Cruz spoke the day after President Obama roundly rejected any effort to defund the law, which has been his signature domestic accomplishment.

"The idea that you would shut down the government unless you prevent 30 million people from getting health care is a bad idea," Obama said Friday.

But Republicans who endorse defunding insist it won't be their fault if the government does shut down.

"The way I see it," said Florida Sen. Marco Rubio, another presidential hopeful, on the Senate floor last month, "is if we pass a budget that pays for everything except for Obamacare, and the president says he'll veto that, it is he who wants to shut down the government."

And that makes Heritage Action's Needham confident that the list of senators signing the defunding letter will only lengthen.

"Our expectation is that when people come back in September, they'll be rushing to get on that letter," he said.

But one who likely won't be is McConnell, the Senate's Republican leader.