Accessibility links
Obama Heads Back To School To Talk College Affordability : It's All Politics The president will spend the next two days on a bus tour of New York and Pennsylvania that includes stops at three colleges and a high school. At each stop, he'll be talking about ways to keep higher education costs down. 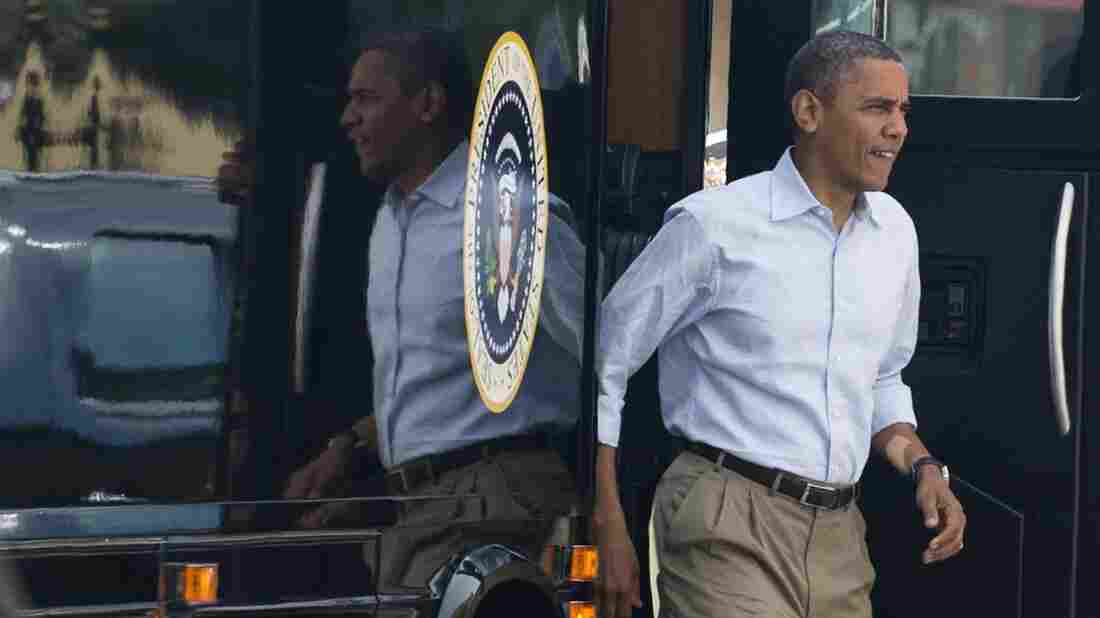 President Obama steps off his bus, nicknamed "Ground Force One," as he arrives for breakfast at the Ossorio Bakery and Cafe in Cocoa, Fla., during a two-day bus tour last year. Saul Loeb/AFP/Getty Images hide caption 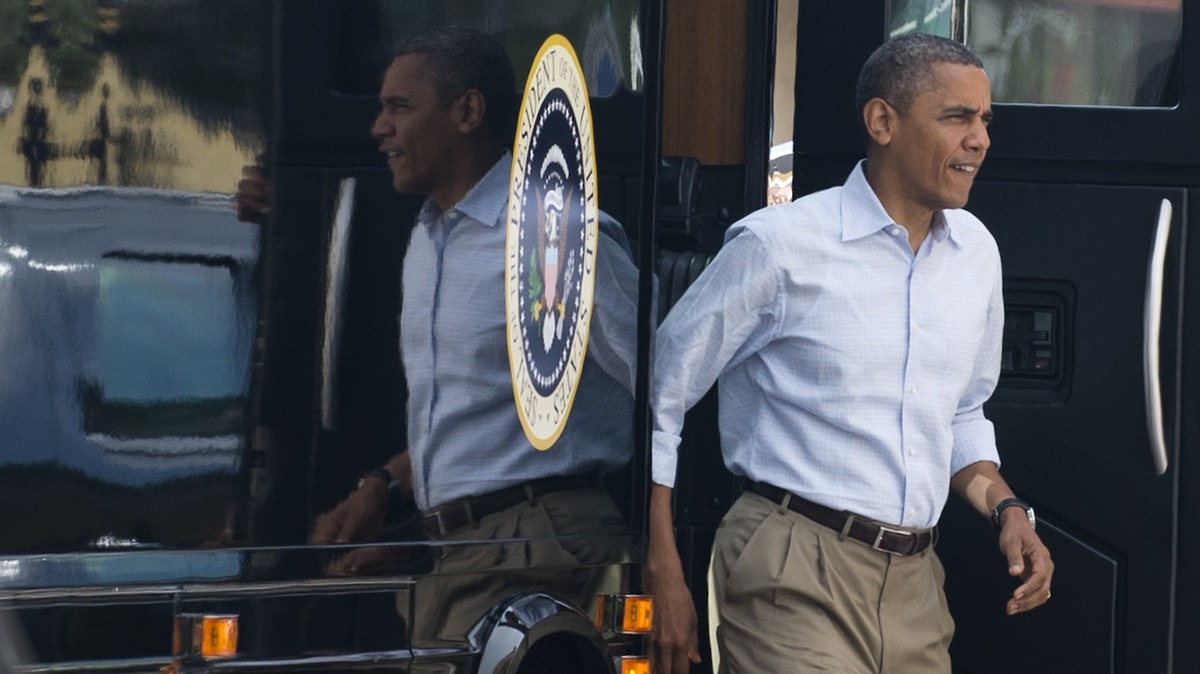 President Obama steps off his bus, nicknamed "Ground Force One," as he arrives for breakfast at the Ossorio Bakery and Cafe in Cocoa, Fla., during a two-day bus tour last year.

It's back-to-school season for college students — and President Obama plans to be right there with them.

The president will spend the next two days on a bus tour of New York and Pennsylvania that includes stops at three colleges and a high school. At each stop, he'll be talking about ways to make college more affordable.

The president's big black bus will make its first stop at the University at Buffalo on Thursday — the same day incoming freshmen will be moving in, hauling suitcases and mini-refrigerators.

"This is a proud and historic occasion for our university and our community," says university President Satish Tripathi. The University at Buffalo earns high marks on the administration's college scorecard for its relatively low-cost tuition and its high graduation rate.

"Our goal really has been to provide quality education at affordable cost," Tripathi says. "So we really are doing things right, and we're really proud that the president has chosen to come and talk about higher education affordability and access at UB."

Throughout his time in office, Obama has championed federal support for higher education, boosting Pell grants and brokering a deal with Congress this summer to preserve low interest rates on student loans. According to the Department of Education, 57 percent of all undergraduates received some kind of federal aid in 2012, up from 47 percent four years earlier.

But White House spokesman Josh Earnest says even as federal assistance has increased in recent years, the cost of attending college has risen faster.

"Government assistance can't keep up with skyrocketing costs," Earnest says. "So what the president believes that we need to do is we need to fundamentally rethink and reshape the higher education system and we need to find a way to build on innovation."

Many state governments have been cutting back on their support for higher education. And that's led many public universities to shrink enrollment and raise their fees. Rachel Fishman of the New America Foundation says that's exactly the wrong approach at a time when more and more good-paying jobs require a college education.

"These are skills that a lot of students have to go back to school for," she says. "So we want to make sure that those pathways are there — that there's an affordable education so that more people can be able to move into the middle class."

Fishman and her colleagues identified the University at Buffalo as one of a handful of "next generation" universities that have found ways to keep costs down while still producing a large number of graduates. Buffalo, with 29,000 students, is part of the State University of New York.

Last year, it launched its "Finish in 4" initiative, designed to help students complete their coursework in four years, rather than five or six, which had become commonplace. The effort includes hiring more teachers to guarantee adequate access to the most popular courses.

Fishman says SUNY has also been good about offering online courses and accepting transfer students from community colleges without a big loss of credits.

"They're coming up with really innovative ways to make sure students are getting the courses they need, the credits they need, to graduate on time, which saves both the state and the student money," she says.

Obama is expected to highlight such efforts as he visits colleges in Buffalo and Binghamton, N.Y., as well as in Scranton, Pa. The bus tour has all the trappings of an election campaign. But political analyst Ross Baker of Rutgers University says there are no obvious votes for the president to influence.

"I think he's got to show the flag," Baker says. "He's just come off his vacation at Martha's Vineyard. The summer is kind of slack season. His own poll ratings are slightly down. And I think he wants to reinvigorate his base."

In fact, while the college affordability theme is timely for this back-to-school season, Baker thinks the president really has his eye on upcoming battles with congressional Republicans over the federal budget and the debt ceiling.

"I think he is just really beginning to kind of rev up the engines for the big debates of the fall," Baker says.

And one diesel engine Obama will be revving is attached to a big, black presidential bus.