Accessibility links
Future Historians: Good Luck Sifting Through Obama Video : It's All Politics While a photographer has been an official part of the White House staff since John F. Kennedy was president, an official videographer is something new. Scholars say the thousands of hours of behind-the-scenes footage could be a vital resource, but it may not be very easy to use. 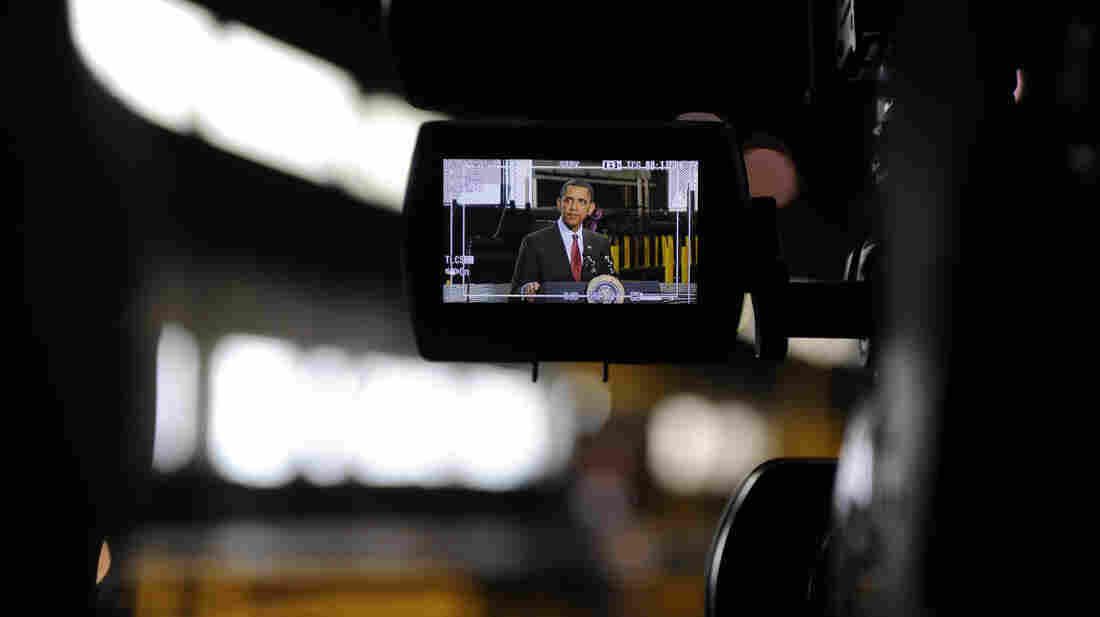 President Obama is seen on a video camera as he delivers a speech in Youngstown, Ohio, in 2010. In addition to footage of official events, the White House now has thousands of hours of behind-the-scenes video that it will archive. Jeff Swensen/Getty Images hide caption 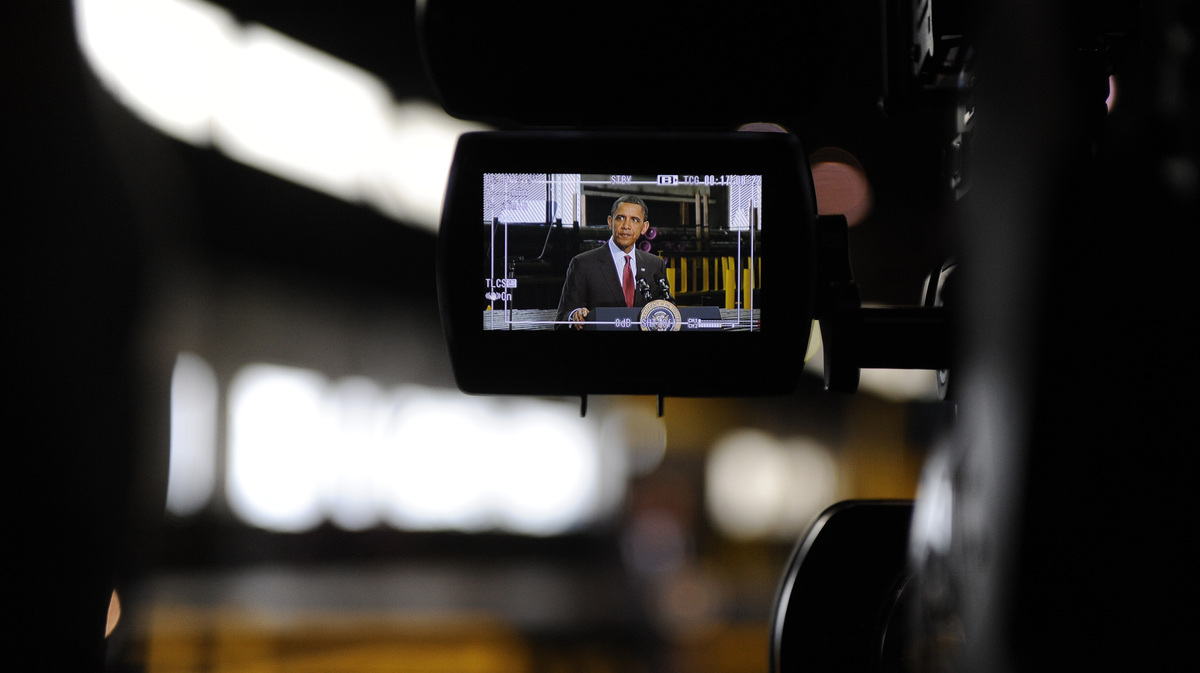 President Obama is seen on a video camera as he delivers a speech in Youngstown, Ohio, in 2010. In addition to footage of official events, the White House now has thousands of hours of behind-the-scenes video that it will archive.

President Obama's second term is just 7 months old, but people in the White House are already starting to look at what happens when it ends.

A massive archiving project is already underway: Letters, photos and even scribbled to-do lists with doodles in the margins go to the National Archives and eventually on to the Obama presidential library.

But one part of the project is a unique challenge for this presidency: dealing with all the footage filmed by the White House videographer.

While a photographer has been an official part of the White House staff since John F. Kennedy was president, an official videographer is something new.

Arun Chaudhary spent the entire 2008 campaign and the first two years of the administration filming Obama behind the scenes.

"We are definitely talking about thousands and thousands of hours," he says, "and that's just ... my camera."

Chaudhary and his successors have filmed Obama on the basketball court, in the Oval Office and palling around with Elena Kagan seconds before he nominated her to the Supreme Court.

Military videographers have long filmed official White House events, like speeches and ceremonies. So, for example, this video of Obama speaking Portuguese to an audience in Brazil is the sort of thing that would be part of any presidential record:

But now there's also video showing the president practicing those phrases backstage before the speech — asking a young woman if he's going to make a fool of himself and saying it'll be her fault if he gets the words wrong:

"The difference between me and the military folks," Chaudhary says, "is that I'm getting a lot of this backstage material that previously wasn't official."

It all seems appropriate for the social media age, when even the most ordinary moments get preserved for posterity. But Chaudhary, who chronicled his time filming the president in a book called First Cameraman, has started to worry about what will happen to all of these White House home movies when Obama leaves office.

While the material will go to the National Archives and eventually to the Obama presidential library, Chaudhary says there are crucial differences between official and casual events that make his material much harder to search.

"I could put the text of a speech into a file or something next to the video of the speech ... and then when you're searching for a specific line, it can come up," he says. "But to actually have someone transcribe every casual conversation the president had with anyone while I was filming, I can tell you would take a long time."

Those transcripts don't exist, and nobody plans to create them. The behind-the-scenes footage is labeled by date and place. But beyond that, the contents will remain a mystery until someone combs through and catalogs them. 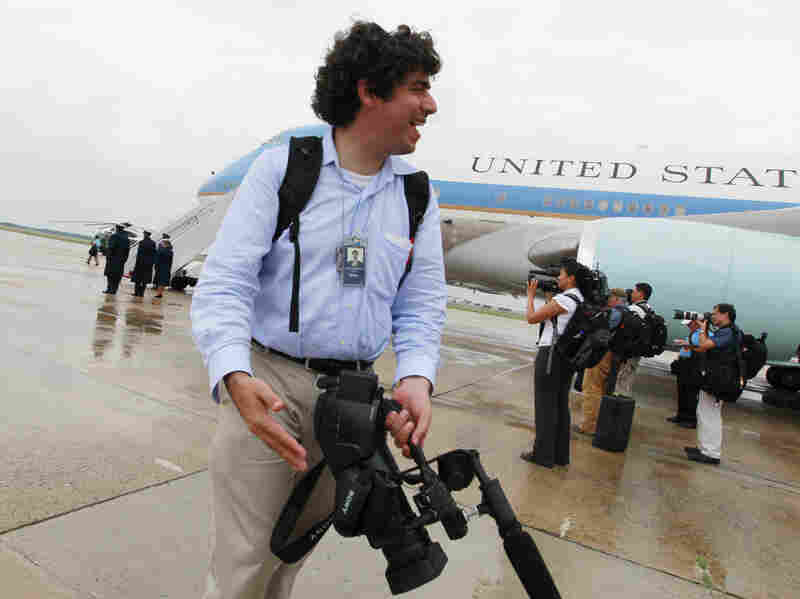 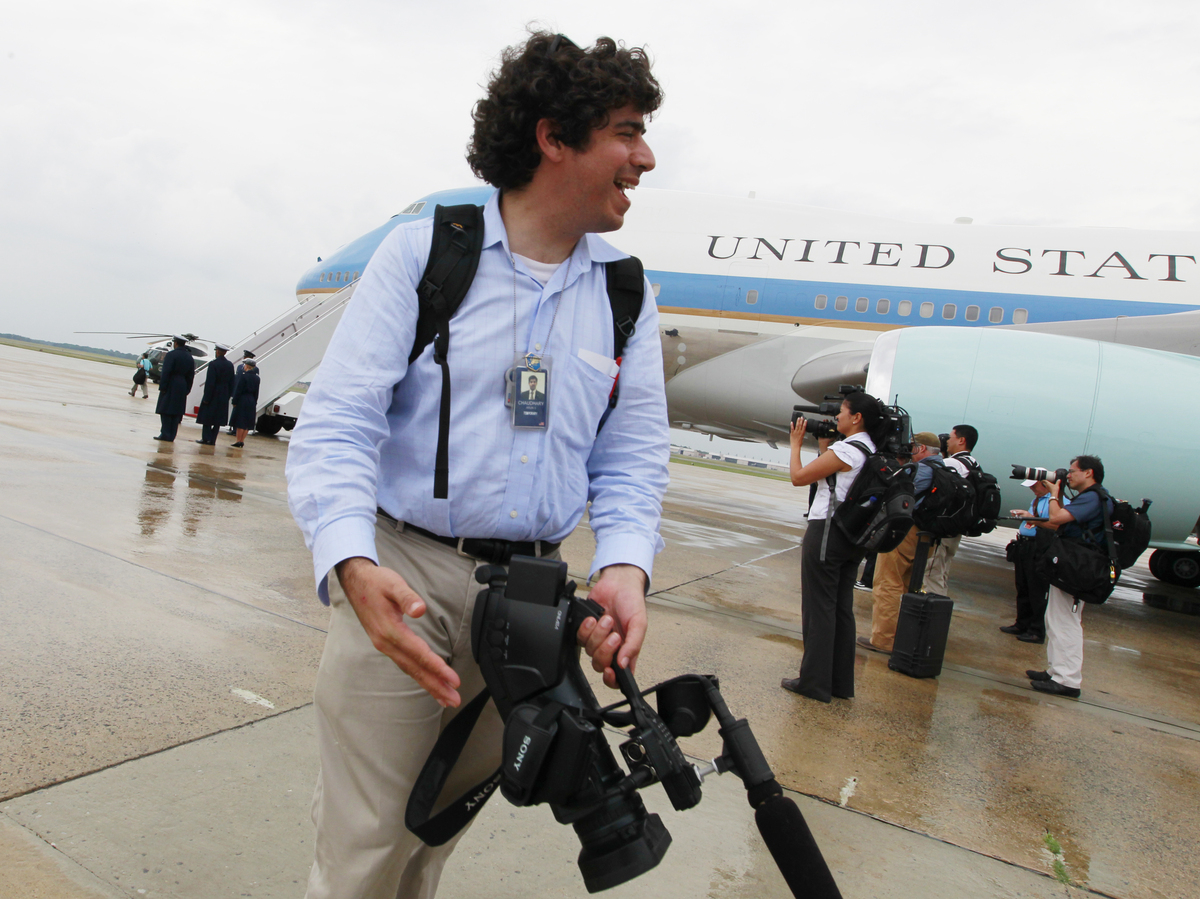 White House videographer Arun Chaudhary stands in front of Air Force One in 2010.

"The style of videography and the type of material I was capturing gives so much valuable context to these more easily searchable events, so I think it's what will be lost when someone is making a documentary in the future," Chaudhary says.

He's not the only one who's worried about this. Journalists, political scientists and filmmakers share his concern.

Martha Joynt Kumar, a political scientist at Towson University, has devoted her career to chronicling the White House.

"I first started coming into the White House when Gerald Ford was president," she says.

She relies heavily on presidential libraries for her research. And she says candid video could be a vital tool for understanding a presidency.

"A videographer is going to take pictures where you actually see the president's interactions — and that's something you really want to get a sense of," she says.

Sharon Fawcett, who ran the presidential library system for the National Archives until retiring two years ago, says this kind of material has the potential to illuminate a presidency in new ways.

"I think it's hugely important," she says. "Having this video diary with this information in it will be a great source for future historians to find out what the president was thinking and how his thinking may have evolved, what kind of conversations he was having with people."

That's if the video becomes easily usable. People who work on these issues dream of a Google-style video search that will let people comb through footage looking for, say, any mention of health care or any time a specific person appears.

So it's not just a government problem. Chaudhary says if YouTube had this cracked, we'd know about it.