Accessibility links
Opponents of Syria Strikes Gain Edge In Lobbying Fight : It's All Politics While opponents of military action in Syria drown Congress in phone calls, the president's grass-roots organization sits on the sidelines. 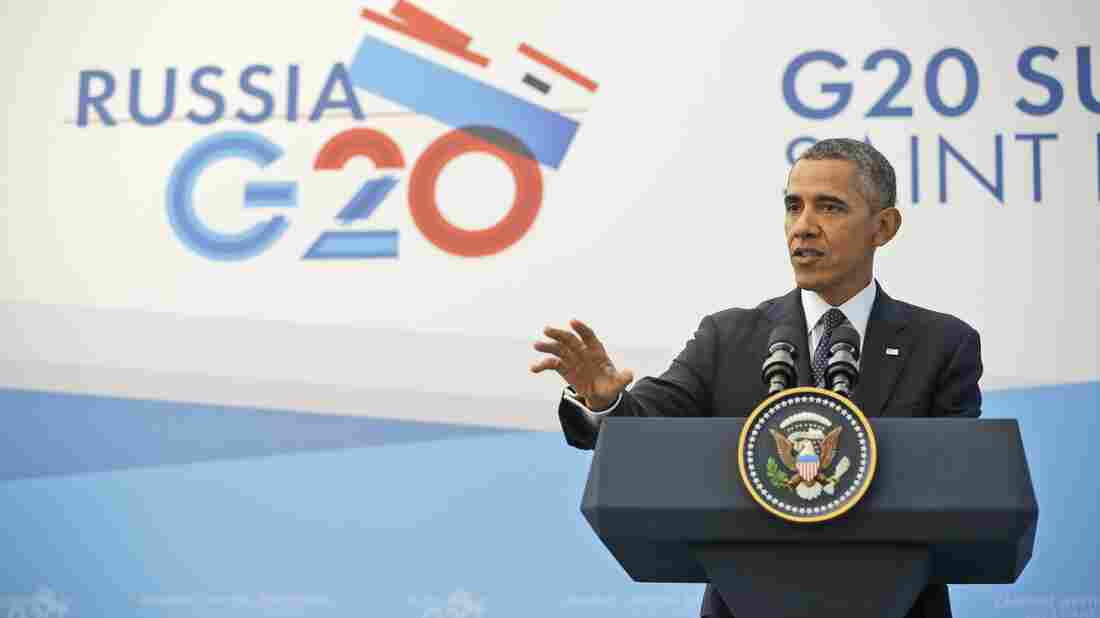 President Obama answers a question regarding the situation in Syria during his news conference at the G-20 Summit in St. Petersburg, Russia, on Friday. Pablo Martinez Monsivais/AP hide caption 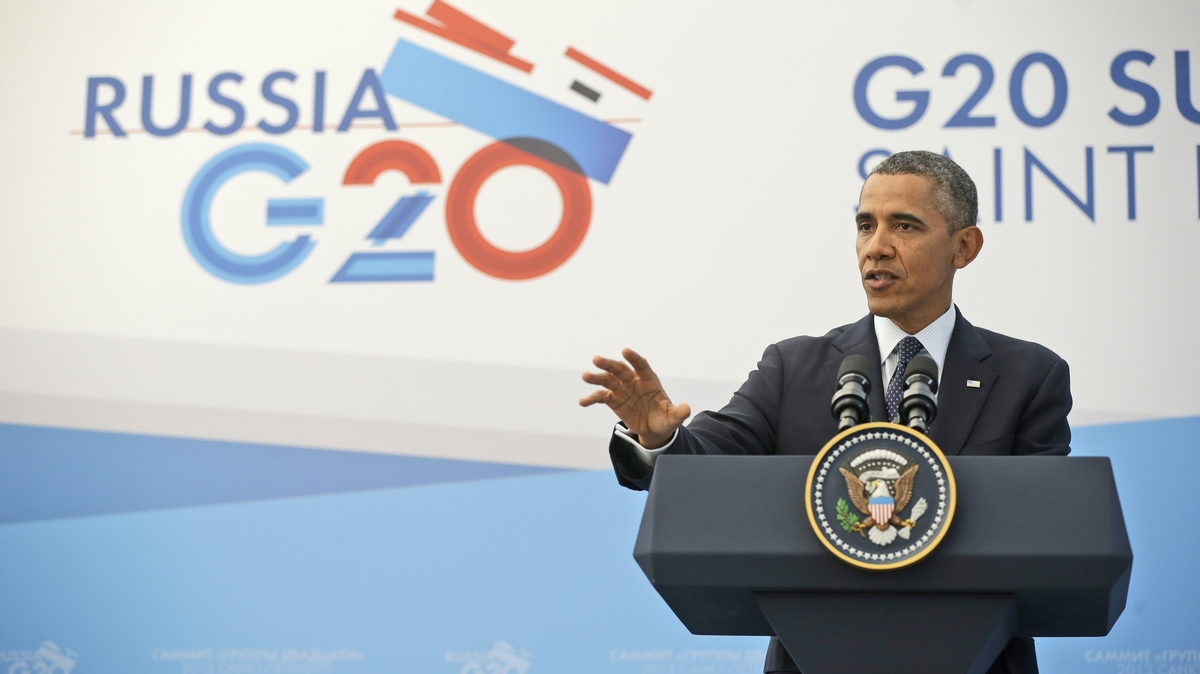 President Obama answers a question regarding the situation in Syria during his news conference at the G-20 Summit in St. Petersburg, Russia, on Friday.

The interest groups opposed to U.S. military strikes against Syria had a very good week. That made it a very bad week for President Obama and those who support his plans.

Anna Galland, executive director of the liberal MoveOn.org — which opposes military action in Syria — said that by midweek, her group's members reported making 10,000 calls to Congress, contributing to an avalanche of calls from citizens opposed to military strikes.

"We are hearing that phones are ringing off the hook in congressional offices already and that they are overwhelmingly ringing in opposition," Galland said. (Not atypical was the call tally in the offices of Rep. Justin Amash, a Michigan Republican. As of Friday morning, there were 595 against compared with 63 in support of strikes.)

"So I'm certain our members' voices are being heard and that they will be taking it up one notch on Monday," she said, referring to vigils scheduled to be held around the nation, including at congressional offices.

Meanwhile, the Syrian Support Group — which backs military intervention — was distracted. The group, which provides U.S. policymakers, including members of Congress, with information about Syrian opposition groups, was dealing with the fallout from a troubling New York Times story about the killings of captured Syrian soldiers committed by opponents of the Syrian regime.

Instead of walking policymakers through a new informational packet it compiled on the military structure and capabilities of the Syrian opposition, "it looks like what we're going to be doing most of the time is countering misinformation," said Dan Layman, the group's director of media relations.

The groups lobbying against a U.S. strike clearly have the weight of public opinion on their side: Polls suggest a large majority of Americans oppose military action. And the opposition crosses ideological lines — it's the rare occasion where MoveOn.org and the conservative FreedomWorks are on the same side.

"FreedomWorks has issued a Key Vote 'NO' against the Syria resolution, which will be given to all Congressional offices," said Jackie Bodnar, a spokeswoman, in an email. That means FreedomWorks will grade lawmakers on how they vote on the resolution.

"In terms of next steps, that really depends on the President," Bodnar added. "If President Obama decides to move forward with a military strike without Congressional authorization (again), then FreedomWorks will revisit our strategy and stand firm against a misappropriation of power. We're a service center to our membership, and they've made it loud and clear to us: No war in Syria."

One group that might have been expected to balance the scales is Organizing for Action, the activist organization that morphed out of the Obama presidential campaign and has been active on Obama's second-term agenda.

But OFA is abstaining from the debate. In a teleconference earlier in the week with grass-roots supporters, OFA's Executive Director Jon Carson explained:

"What I definitely want you all to know is that OFA supports President Obama and the agenda that Americans voted for on Nov. 6, but we don't always actively organize around every issue, and the debate in Congress over the Syria vote is not one that OFA is planning on organizing around."

It's a safe guess that OFA's hands-off stance isn't exactly what Speaker John Boehner had in mind when he said on Tuesday that he supported the president's planned Syrian strike but that it was up to the president to do the hard lobbying needed to get the votes in Congress.

While the numbers look bleak for those lobbying for strikes, supporters say they haven't yet lost hope. "I'm not giving up," said Sawsan Jabri, a Syrian immigrant in Michigan with the Syrian Expatriates Organization, as she prepared for a Friday evening rally in Birmingham, Mich.

"I feel this is very critical for national security," she said. If the U.S. doesn't respond militarily, Syrian President Bashar Assad will only escalate his use of the weapons, with near-term effects on innocent Syrians and eventual consequences for the U.S., she argues.

Also, while she says the U.S. political process remains somewhat "vague" to her, her understanding is that "our president has the final decision." In other words, even if Congress says "no," she's counting on Obama to proceed with the attacks.