Accessibility links
Constituent Mailbag: A Deluge Of Opposition To Syria Strikes : It's All Politics Calls and emails to congressional offices have been close to unanimously negative. The latest polls show solid majorities of Americans opposed. With feelings running so high, many politicians are wary of offering support for military strikes on Syria.

Constituent Mailbag: A Deluge Of Opposition To Syria Strikes

Constituent Mailbag: A Deluge Of Opposition To Syria Strikes 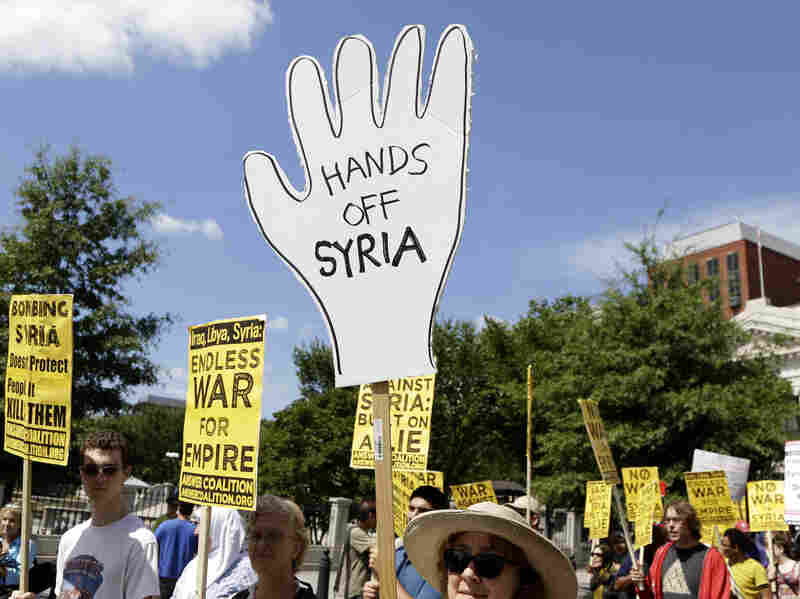 Rep. Jim Himes is willing to vote against the wishes of his constituents. Probably not this time, though.

"Like the rest of the country, my constituency is pretty much opposed to the intervention in Syria," says the Connecticut Democrat. "Since health care reform, I haven't seen an issue that energized as many people."

His colleagues in the House and Senate report the same.

It's a reflection of a public mood that's turned decisively against military action in Syria. The latest polls show that a solid majority of Americans are opposed to a military intervention.

In terms of calls and emails coming into Congress, opposition has been closer to unanimous.

Florida Republican Rep. Steve Southerland said last week that of the 300 people who called or emailed his office, 96 percent opposed U.S. intervention in Syria. On Thursday, Oregon Democratic Rep. Peter DeFazio reported this tally of constituents who called, emailed or wrote his office: 1135 opposed, 18 for.

Senate offices don't appear to be much different.

"As of last Friday, for our D.C. office, we had almost 450 calls against any U.S. action in Syria, and only two calls in support," says Chad Gallegos, spokesman for Mississippi Republican Sen. Thad Cochran. "In our Jackson office, [there were] almost 200 calls. None of them were supporting U.S. intervention."

It's commonplace for politicians to cite opinion among their constituents, says Kristina Miler, author of Constituency Representation in Congress.

"It lets them show responsiveness," says Miler, who teaches political science at the University of Maryland. "When there's a vote that's particularly difficult or consequential, it provides them some cover — 'I was doing what my people wanted me to do.' "

The switchboards can light up, particularly on emotionally resonant issues such as immigration. But it's rare for members of Congress to share tallies of public opinion with such specificity, Miler says, and unusual for calls and emails to be almost completely one-sided.

All of this takes place amid a huge surge in incoming communications traffic. Communications from constituents have more than doubled — or, in some cases, increased tenfold — according to a 2011 study by the Congressional Management Foundation.

That study found that upwards of 5,000 associations, nonprofit groups and corporations have Web pages designed to drive mail traffic to Capitol Hill — and, in fact, may account for the majority of it.

Certainly, on the Syria issue, there are groups on both the right and the left encouraging people to make their opinions known to Congress.

But the unusually large and vocal outpouring on a foreign policy issue like Syria feels more "organic," says Brad Fitch, president of the Congressional Management Foundation.

"Something like this happens every few years, but it's really not frequent," he says. "For cynical Americans who think their members of Congress don't listen, they do listen."

Members of Congress are less likely to put their fingers in the wind when it comes to national security questions, Fitch says, as opposed to domestic issues. They have access to intelligence that the average person doesn't.

Some members are blunt about having more information than the people they represent and taking positions based on that. California Democrat Dianne Feinstein, who is chairwoman of the Senate Intelligence Committee, said last week that constituent calls are "overwhelmingly negative" on the Syria question, but they "have not seen what I have seen, or heard what I have heard."

Himes says that constituents sometimes do contact him with erroneous information. In this case, though, he says they approach the issue with "solemnity" and share his sense of the situation.

He says both he and the bulk of his constituents believe that Syrian President Bashar Assad is responsible for the use of chemical weapons, even though the intelligence is "not airtight."

Himes, who says he's "leaning no" on the question of military action in Syria, says he takes his title of "representative" seriously.

"If I'm going to go against overwhelming constituent sentiment, it's because there's an overwhelming argument on the other side," he says. "I haven't heard that yet."