Accessibility links
Obama's Speech On Syria May Fail To Sway Doubters : It's All Politics The president framed the need to take punitive action against Syria in a historical and moral context. But in a tacit acknowledgment of public and congressional resistance, he said he was postponing further military and political action while pursuing newfound diplomatic openings. 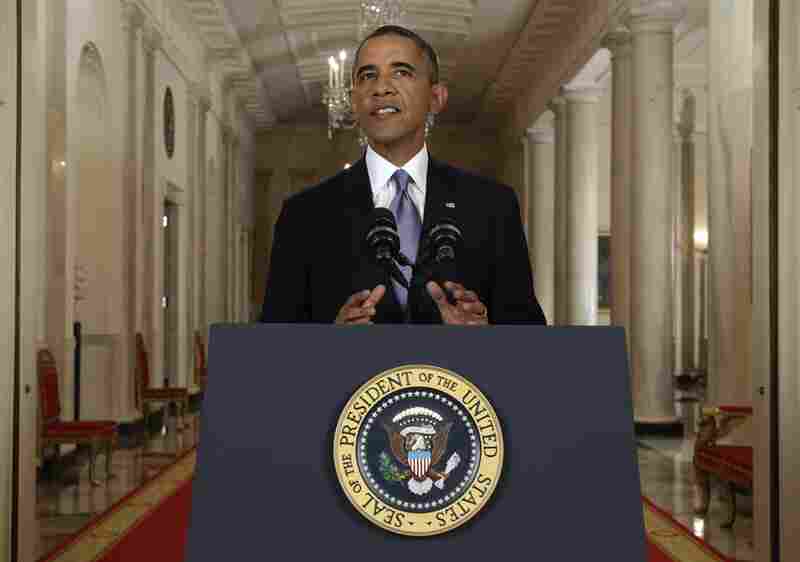 President Obama addresses the nation in a live televised speech from the East Room of the White House on Tuesday. Evan Vucci/Pool/Getty Images hide caption 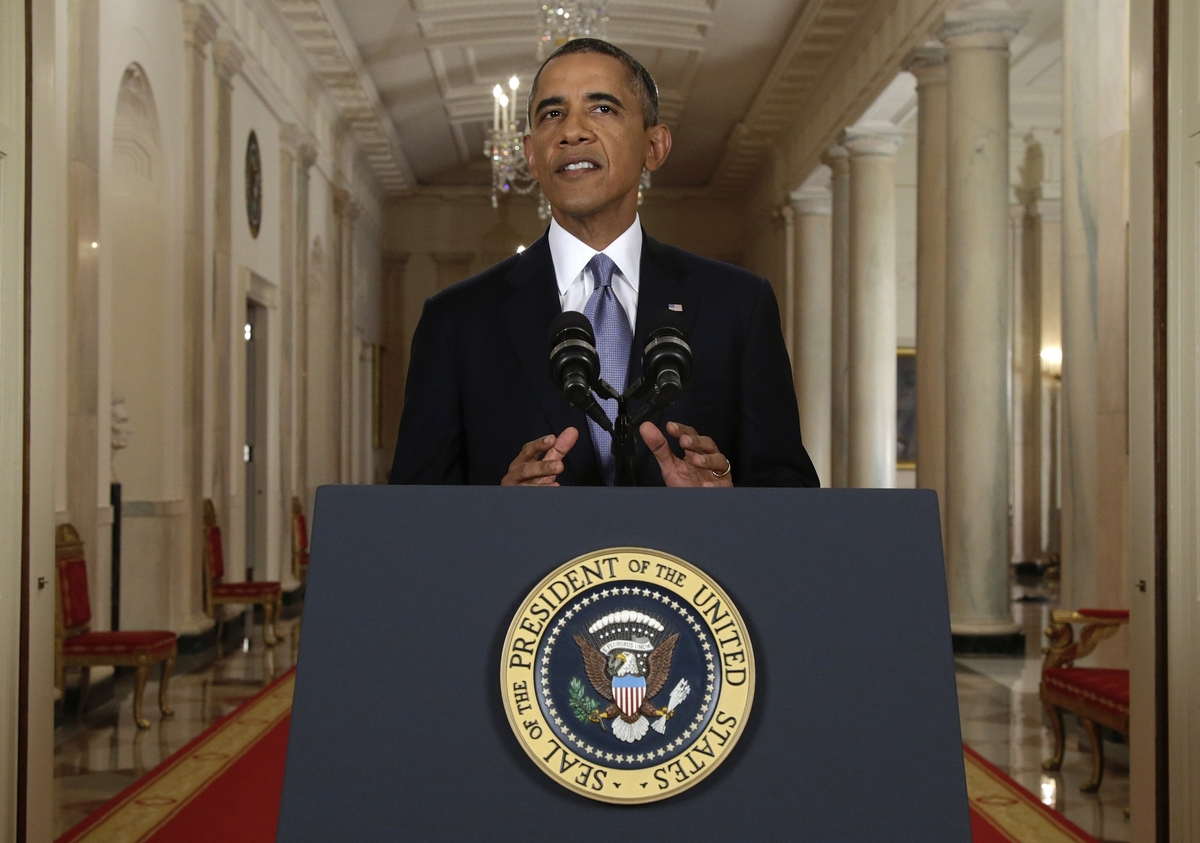 President Obama addresses the nation in a live televised speech from the East Room of the White House on Tuesday. 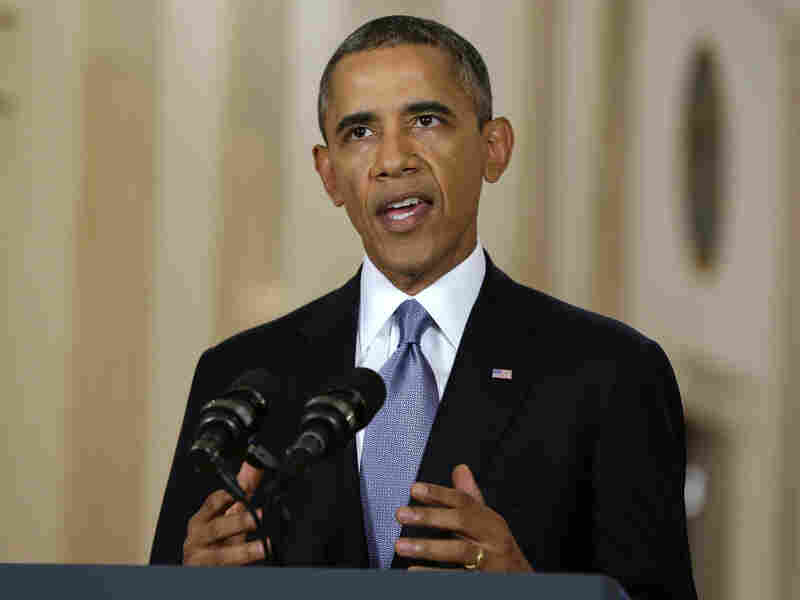 President Obama addresses the nation in a live televised speech from the East Room of the White House on Tuesday. Evan Vucci/AP hide caption 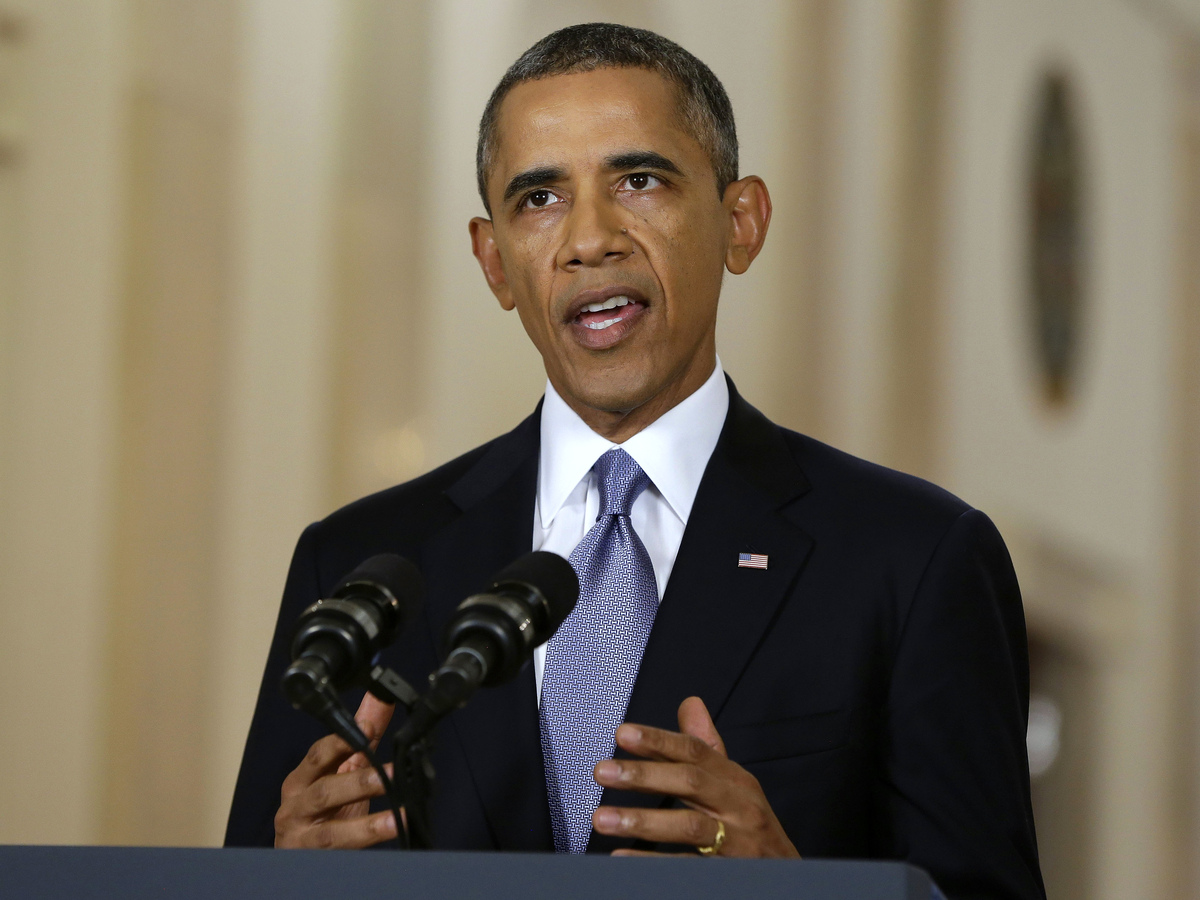 President Obama addresses the nation in a live televised speech from the East Room of the White House on Tuesday.

By scheduling his Syria address on Tuesday night, President Obama had initially intended to shape the course of events. Instead, events had already overtaken his speech.

He had planned to rally public support for military action against Syria, in hopes of winning over a reluctant Congress. As things turned out, he said Congress should postpone its voting — once expected to begin as early as Wednesday — to see whether a diplomatic deal could be worked out.

But Obama said he's keeping the military on alert, in case talks fall through.

"It's in the national security interests of the United States to respond to the Assad regime's use of chemical weapons through a targeted military strike," the president said, addressing the nation from the East Room of the White House.

The president's case for action has come to contain more apparent contradictions as the days of debate have worn on.

"It's hard to present yourself as this decisive leader, saying we need to use military force, while on the other hand saying we might be able to work out a diplomatic solution," says David Lewis, a political scientist at Frostburg State University in Maryland, who has studied presidential persuasion.

Obama always faced a difficult task with this particular speech. He intended to not only convince an increasingly skeptical public that punitive strikes against Syria were a good idea but also sway voters to the extent that they would push Congress to support the plan.

That was a tough sell. And this was an especially unusual context. Presidents often ask the public to join them in their legislative quests on domestic issues, such as changes in tax policy.

Foreign affairs — especially military matters — have been an entirely different matter. Ronald Reagan didn't ask for permission from Congress to invade Grenada. The same with George H.W. Bush and Panama.

In Obama's own case, he decided to bomb Libya and increase the U.S. troop presence in Afghanistan without pleading with either the public or Congress.

On Tuesday, Obama said American democracy is stronger and speaks with a louder voice abroad when presidents have the support of Congress. That's undoubtedly true, yet in this instance, Obama ran the risk of losing any semblance of congressional backing, and with it the opportunity to act as he desired.

"When presidents speak in a nationally televised address, typically they present themselves as independent actors, where they're not asking Congress for anything," Lewis says. "They're saying, 'I'm the commander in chief and I'm announcing a course of action.' "

It's "extraordinarily rare" for presidents to turn the tide of public opinion with any single speech, says Matthew Eshbaugh-Soha, author of Breaking Through the Noise: Presidential Leadership, Public Opinion and the News Media.

"In terms of moving public opinion in this instance, that's not going to happen, because people are really fatigued by Iraq and Afghanistan," says Eshbaugh-Soha, a political scientist at the University of North Texas. "People don't see that this is something the United States should be involved in."

For Obama, speeches that have largely been sales pitches have not been his strong point. His most memorable addresses — such as his Nobel lecture, his speech following the shootings in Tucson, Ariz., and his celebrated speech on race as a candidate in 2008 — have been broad, philosophical and aspirational in nature.

They were uplifting discussions of values and what he thought the nation was capable of achieving and becoming. The addresses about nuts-and-bolts governance issues — his speeches about the Affordable Care Act, for example, or calls for more spending on infrastructure — have been less inspiring.

That may be the nature of the beast. But over the past couple of years, Obama has had an even tougher time offering stirring appeals, given the stalwart resistance to his ideas among Republicans on Capitol Hill.

When it came to Syria, they were being joined in opposition by many members of the president's own party.

To win over doubters, Obama sought to wrap his appeal regarding a specific policy proposal — bombing Syria — within a larger framework.

"What kind of world will we live in if the United States of America sees a dictator brazenly violate international law with poison gas and we choose to look the other way?" Obama asked.

He sought to address his "friends" on both the political left and right who have criticized his plans for military action. He also moved to allay concerns of ordinary Americans who had written to him and were worried about such possibilities as the U.S. stepping onto the "slippery slope" toward another war in the Middle East.

"For nearly seven decades, the United States has been the anchor of global security," he said. "This has meant doing more than forging international agreements. It has meant enforcing them."

All of this left his speech a curious mix. While seeking to appeal to the nation's better nature, Obama kept to his original plan of insisting on the virtue of taking punitive action against Syria. He argued it would be better to act with congressional support — which he now knows he does not have — yet for the time being wants to postpone any further military or congressional action pending diplomatic efforts.

So far, when it comes to U.S. action against Syria, it's only been a war of words. Rather than setting out a clear course of action, the president's speech made it clear that the debate, both international and domestic, will continue.