Accessibility links
Not-So-Fond Memories From The Last Government Shutdowns : It's All Politics The last time the federal government closed down, some 800,000 federal workers were told to stay home and millions of Americans were shut out of everything from their national parks to small-business loans. 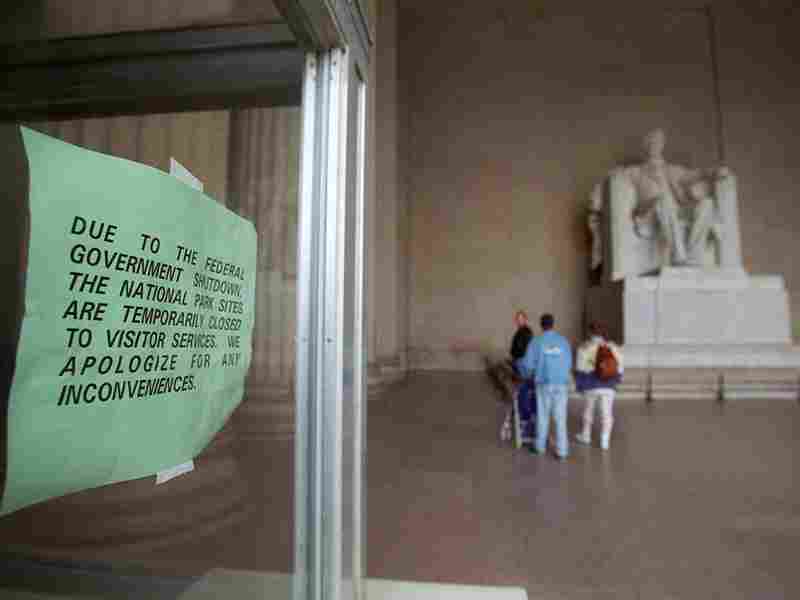 A sign hangs in the window of an information booth at the Lincoln Memorial in December 1995, announcing the temporary closure of the attraction due to the government shutdown. Mark Wilson/AP hide caption 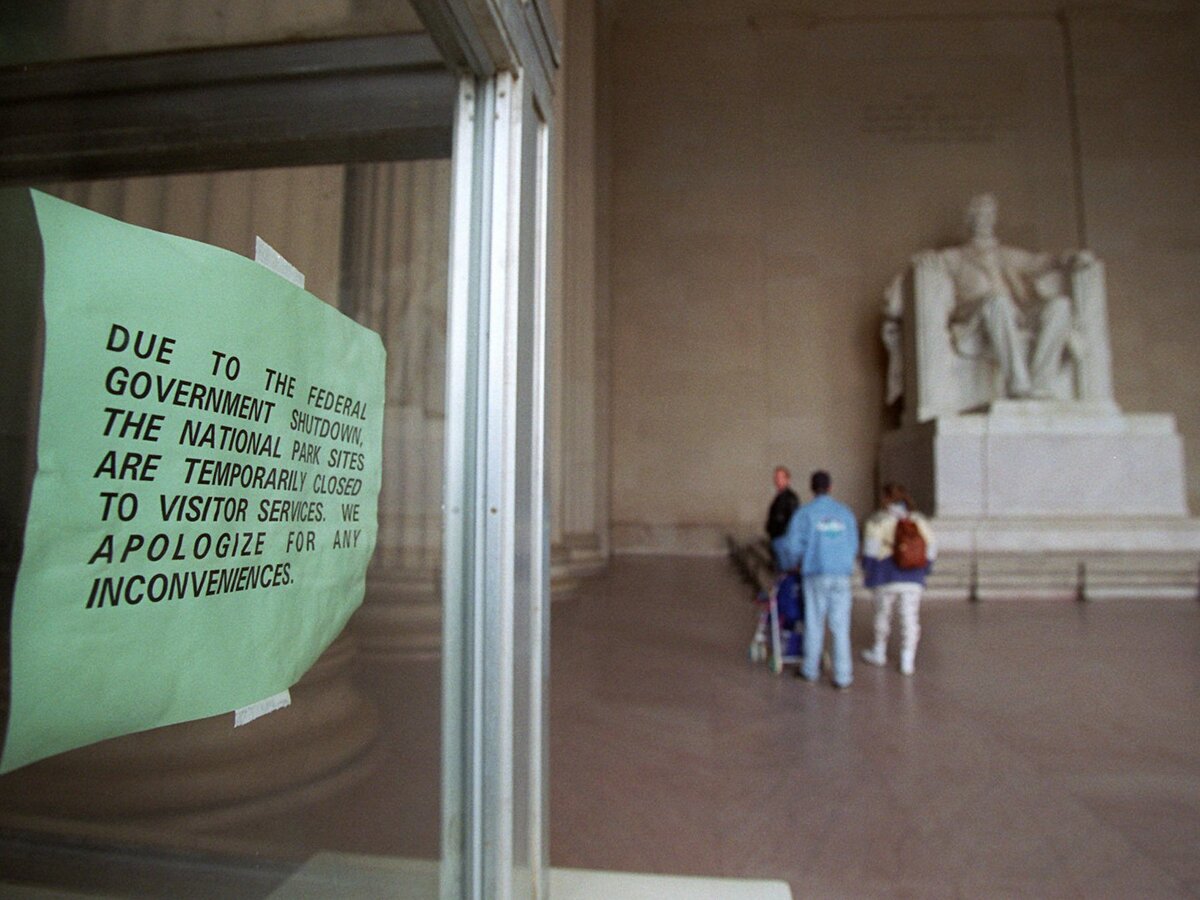 A sign hangs in the window of an information booth at the Lincoln Memorial in December 1995, announcing the temporary closure of the attraction due to the government shutdown.

For those old enough to remember, the government shutdown skirmishing now underway in Washington brings back some not-so-fond memories of late 1995 and early 1996.

That's the last time a divided government, unable to settle its differences before the money from previous years' spending bills ran out, forced dozens of agencies to close. Some 800,000 federal workers were told to stay home and millions of Americans were shut out of everything from their national parks to small-business loans.

In fact, in 1995 and '96 there were two government shutdowns. The first lasted six days in mid-November 1995, the second from mid-December 1995 to early January 1996. For those 26 days, in addition to the national parks, the Smithsonian museums in Washington were also closed. Veterans' health and welfare services were curtailed, passport applications didn't get processed, new clinical research patients were not accepted at the National Institutes of Health, and federal contractors had to furlough employees.

According to a report by the Congressional Budget Office, the costs of the 1995 shutdowns totaled some $1.4 billion.

While a government shutdown this year would be due to an impasse over a new program — the Affordable Care Act, aka Obamacare — the shutdowns in 1995 were largely over cuts to existing programs, especially Medicare and Medicaid.

Republicans had won a majority in Congress for the first time in 40 years the previous November. Led by Speaker Newt Gingrich, they demanded sharp cuts in government spending in discretionary programs, such as welfare, and so-called entitlements, like Medicaid and Medicare.

When President Clinton vetoed the spending cuts, round one of the shutdown was underway. The White House and Congress quickly agreed to extend spending on a temporary basis, under the condition that the president agree to a plan to balance the federal budget.

But those talks proved fruitless, and round two of the shutdown followed.

The two sides continued talking throughout the holiday season and in the end reached agreement on a deal similar to what was on the table before the shutdown, with cuts to federal spending (though smaller than Republicans had originally demanded) and a path to a balanced budget

According to polls, Republicans quickly bore the blame for shutting the government down. Their hand was weakened when Gingrich told reporters he had forced a shutdown in part because the president made him exit Air Force One by the back door after returning from the funeral of slain Israeli Prime Minister Yitzhak Rabin.

In his State of the Union address that January, Clinton was able to declare the "the era of big government is over." In November, he easily won re-election over one of the (reluctant) leaders of the shutdown, Republican Sen. Bob Dole.

Having learned some hard lessons in 1995-96, many Republicans seem to realize that a shutdown this year would hurt them more than Democrats. But the political blame may be a bit more muddled: While Republicans control the House, Democrats are in the majority in the Senate and may not escape a share of the responsibility for a shutdown.

And while as many federal programs and employees would be idled in a shutdown as before, large swaths of the government would be deemed essential, and exempt from closing.

Border Patrol agents, air traffic controllers and TSA officers would remain at work. Social Security and other benefits checks would still go out. But with the government relying more on contractors than in 1995, the economic impact from a prolonged shutdown may be bigger this time around.