Accessibility links
8 Things To Know About A Government Shutdown : It's All Politics In the event of a shutdown, you'll get your mail and your entitlement check. But forget about visiting national parks and monuments, and expect delays in getting passports or visas.

8 Things To Know About A Government Shutdown

8 Things To Know About A Government Shutdown 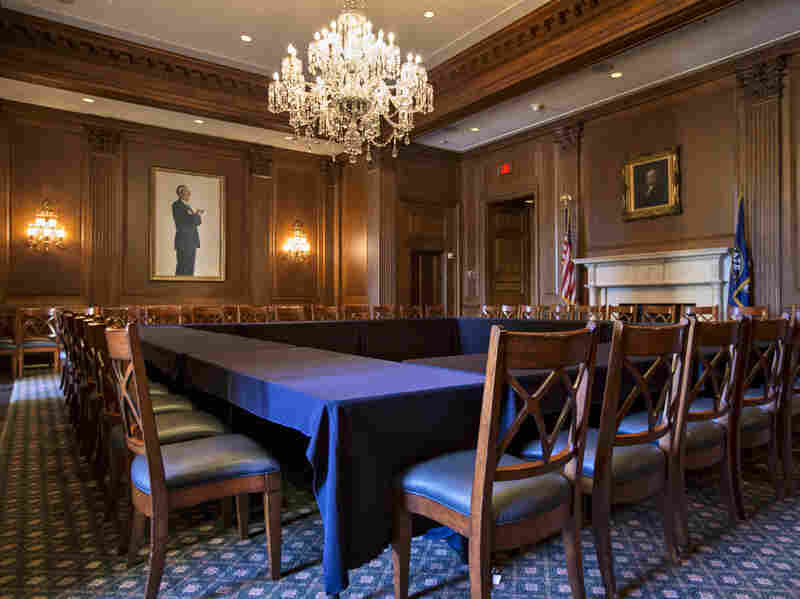 An empty Senate meeting room, just outside the chamber, is seen Monday in Washington. Only a week remains for Congress to pass a funding bill to avoid a government shutdown. J. Scott Applewhite/AP hide caption

In seven days, the federal government runs out of money.

While the Republican-controlled House of Representatives passed a resolution Friday that keeps the government funded through Dec. 15, the measure also defunded President Obama's signature health care law — which means it has virtually no chance of passing the Democratic-controlled Senate.

If a budget resolution doesn't hit President Obama's desk before Oct. 1, that's a big problem: The government will be forced to close its doors.

With that prospect looming, here are eight things you should know about the possible shutdown:

It won't be the first time

Since a new budgeting process was put into place in 1976, the U.S. government has shut down 17 times. Presidents Jimmy Carter and Ronald Reagan each dealt with six shutdowns during their terms in office, lasting anywhere from one day to 2 1/2 weeks.

The last actual shutdown came in 1996 — though the government came close during budget negotiations in 2011.

The three-week shutdown that lasted from Dec. 16, 1995, to Jan. 6, 1996, ranks as the longest in U.S. history. As a result, about 284,000 federal workers were furloughed, and around 475,000 essential employees went without a paycheck, although they were eventually reimbursed.

They weren't the only ones inconvenienced. Some benefits for military veterans were delayed, and cleanup at more than 600 toxic waste sites was stopped. The government also shut down for six days in mid-November 1995, initially resulting in the furlough of 800,000 federal employees. The Congressional Research Service reported the shutdowns cost taxpayers a combined $1.4 billion.

Only federal employees deemed "essential" would continue to come to work during a shutdown. Employees who qualify as essential include those involved in national security, protecting life and property and providing benefit payments.

That means members of the military, border control agents, air traffic controllers, the FBI and the TSA are among those who would remain on duty. The president and members of Congress are also exempt from furlough and must decide which of their respective staff members to keep around during a shutdown.

The checks are in the mail

Even in the event of a shutdown, Social Security beneficiaries will still find their checks in their mailboxes and doctors and hospitals will receive Medicare and Medicaid reimbursements. However, if the government does not resolve the budget situation by Nov. 1, those entitlement program payments could be delayed by up to two weeks.

Even in a shutdown, the Postal Service delivers

One reason Americans will get their entitlement checks: A government shutdown would not hit the operations of the U.S. Postal Service. Government agencies that the Treasury Department does not directly fund, like USPS, would be relatively unaffected in the short term by a shutdown . Some postal employees would very likely face furlough, but it wouldn't be enough to completely close down the agency.

National parks and museums? Forget it

Have plans to visit a national park or go sightseeing in the nation's capital? You might want to cancel them. During the Clinton-era shutdowns, 368 national parks closed, resulting in the loss of 7 million visitors. In Washington, D.C., the public would be unable to visit the monuments and museums that millions of tourists flock to every year. The Capitol building would remain open, though.

Those hoping to enter or leave the country during a shutdown would most likely experience some difficulty. The government was unable to process around 200,000 pending passport applications and a daily average of 30,000 visa and passport applications by foreigners during the 1995-96 shutdowns. This would result not only in a headache for would-be travelers but a loss in millions for the airline and tourism industries.

Who would be blamed for a shutdown?

Generally speaking, no one comes out looking good if the government shuts down. A Pew Research poll conducted Sept. 19-22 shows 39 percent of Americans would blame Republicans if a shutdown were to occur, compared with 36 percent who would fault the Obama administration and 17 percent who would hold both sides responsible. According to a Pew poll from a comparable period during the 2011 budget battle, the public spread the blame around nearly identically.