Accessibility links
Countdown To Shutdown: It's GOP Senator Vs. GOP Senator : It's All Politics Tea Party backed senators Ted Cruz of Texas and Mike Lee of Utah got into a rhetorical fight with fellow Republican Sen. Bob Corker of Tennessee, who accused them of grandstanding. 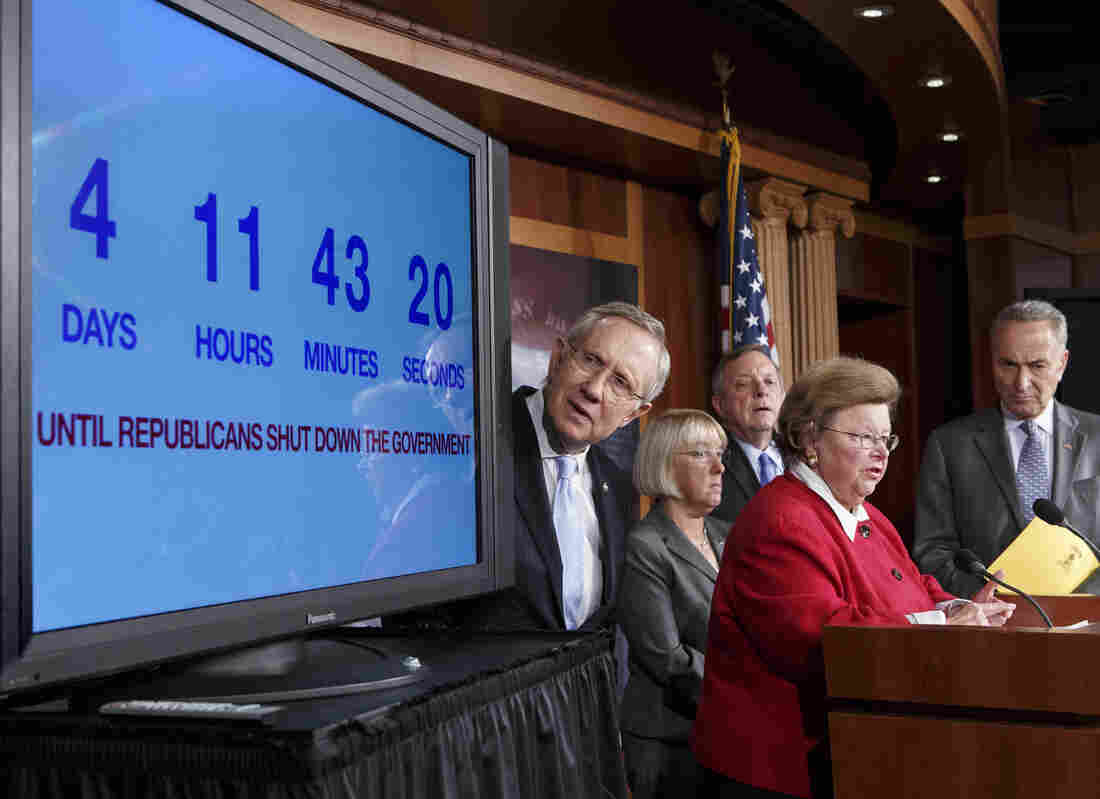 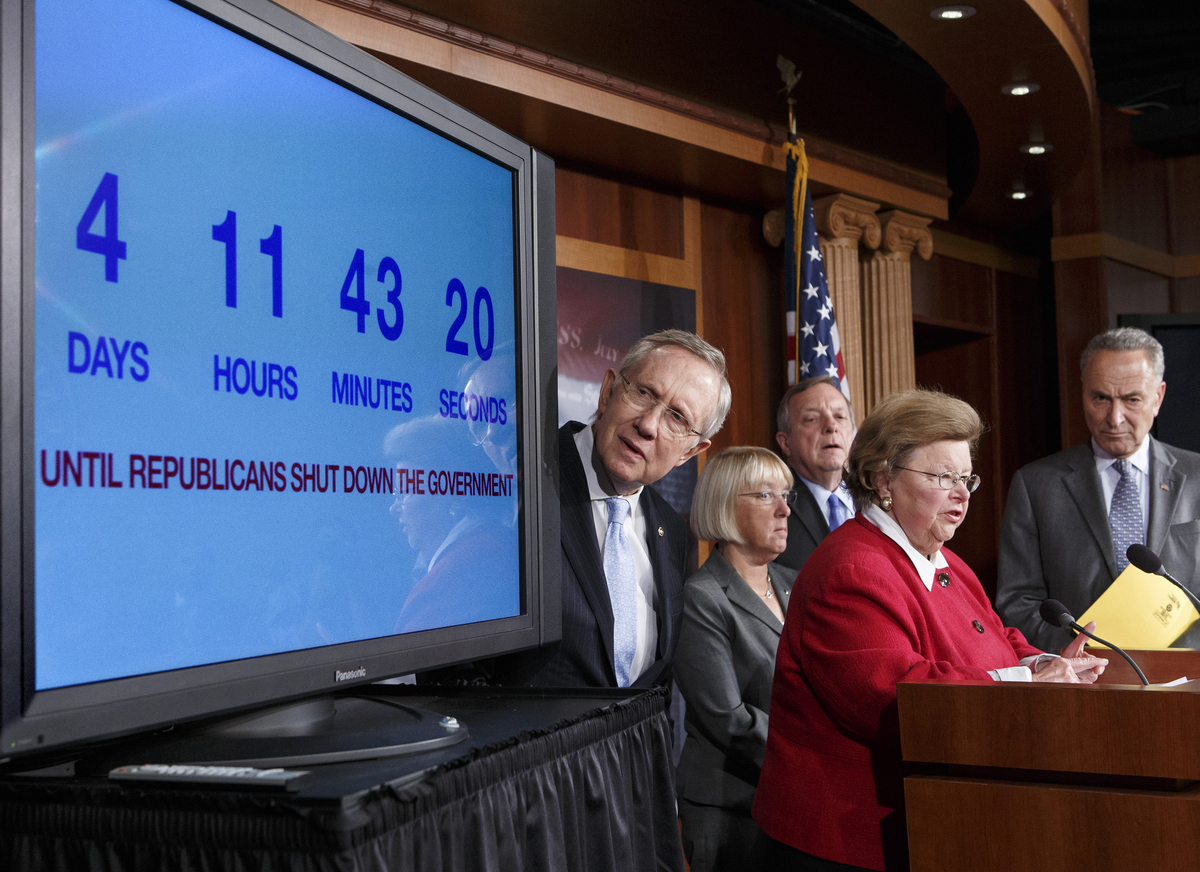 Senate Majority Leader Harry Reid, D-Nev., looks at a countdown-to-shutdown clock during a news conference in the Capitol on Thursday.

Senate Majority Leader Harry Reid raised the possibility that the Senate might be able to finish its work on the budget bill by the end of the day, sending it to the House sooner rather later. If Republicans went along, that would give the House more time to act to avert a government shutdown next week.

After Reid asked for unanimous consent to accelerate the process so the Senate could vote Thursday, Lee and Cruz got into a rhetorical knife fight with fellow Republican Sen. Bob Corker of Tennessee. It was the Senate GOP civil war breaking out into the open.

Corker accused Lee and Cruz of wanting to delay the vote until Friday because they had sent out news releases to their Tea Party supporters to expect "a show" on Friday — and a Thursday evening vote would ruin their plans. Cruz and Lee didn't deny it.

Meanwhile, Senate Democrats and House Republicans showed themselves no closer to a compromise to keep the federal government funded past Monday.

House Speaker John Boehner, R-Ohio, was asked if Republicans controlling the House would accept from the Senate a so-called "clean" continuing resolution to fund the government — one stripped of House language to defund Obamacare.

"I don't, I do not see that happening," Boehner told reporters.

At a news conference on the other side of the Capitol, Reid, a Democrat from Nevada, said: "We want a clean CR. That's what we're going to get."

Turning to a flat-screen TV that was being used as a shutdown clock, Reid said: "If they want to shut down the government, here's how much time they have to figure it out: 4 days, 11 hours, 22 minutes and 15 seconds."

House Republicans also unveiled a number of items they hope to trade Democrats for next month when Congress turns to a debt-ceiling increase. Among House requests: a one-year delay in implementing Obamacare. Asked if Democrats would accept that, Reid simply said, "No."

Adding to the gloom, Reid said he and Boehner haven't talked at all in recent days.

For his part, President Obama sounded as adamant as everyone else. He told an audience at a Largo, Md., event, about Republican efforts to halt Obamacare: "That's not going to happen as long as I'm president. The Affordable Care Act is here to stay."

Friday
Reid says the Senate should vote on the spending legislation Friday.

First, the Senate will take a vote to end the current period of debate. Assuming that gets the needed 60 votes, which now seems likely, the Senate would proceed to debate the actual House continuing resolution. At least 60 senators also would have to agree to end debate on the spending bill.

Senate Democrats will substitute the House's continuing resolution with an amendment that removes the Obamacare defunding language. That would require only 51 votes, which Senate Democrats should have no trouble getting. The Senate could then get the spending bill back to the House late Friday.

Also on Friday, and in the other wing of the Capitol, the House will take up its debt-ceiling bill, which is expected to emerge from the Rules Committee late Thursday. The House is expected to pass that measure sometime Friday.

The one unmovable thing is the deadline to avoid a shutdown; that's midnight Monday, the end of the month.