Accessibility links
Unable To Stop Shutdown, Obama Pins Blame On GOP : It's All Politics As the president tries to convince the public that Republicans bear the blame for budgetary gridlock, he faces an entirely different political and media landscape than in the last government shutdown nearly 18 years ago. 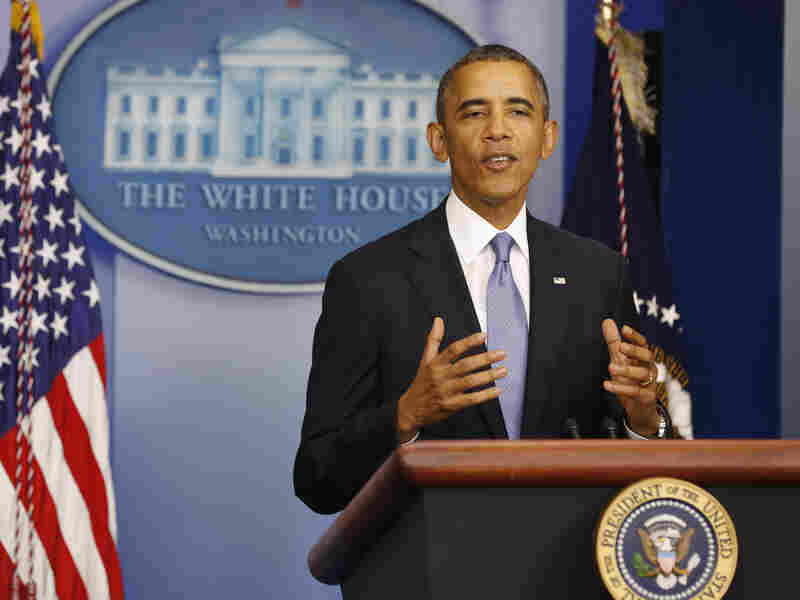 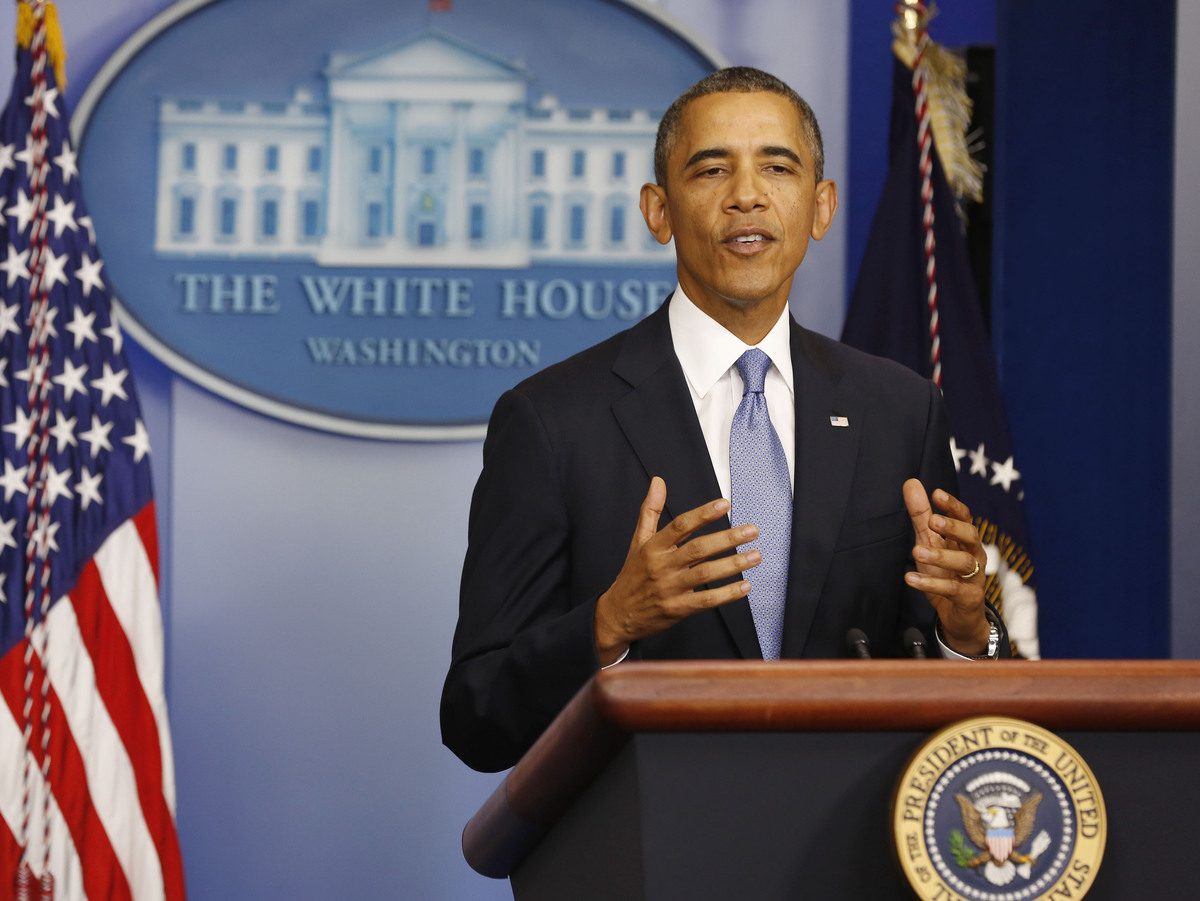 President Obama makes a statement to the press about the government shutdown in the White House briefing room Monday.

"When it comes to Congress paying its bills ... we cannot be a country that is lurching every two months or three months from crisis to crisis to crisis," Obama said in an interview Monday with NPR's Steve Inskeep.

Yet that is precisely the situation the president finds himself in.

As of midnight Monday, much of the federal government is now shut down for the first time since 1996.

Members of Congress will face intense pressure to work out a deal — particularly with a debt ceiling limit set to be breached by midmonth.

Obama says he'll hold firm and not give in to House GOP demands that any budget package contain language delaying parts of his signature health care law, the Affordable Care Act, also known as Obamacare.

The president said he "shouldn't have to offer anything" in response.

The message wars are just beginning. Obama's comment that he "shouldn't have to offer anything" won plaudits from Democrats who like to see him standing firm, while angering conservatives who took it as further proof of his lofty self-regard and highhandedness.

Conservative commentator Hugh Hewitt tweeted that it was "very revealing" and belongs in the "Sound Clip Hall of Fame."

In his interview with Inskeep, Obama insisted that he is "happy to talk to Republicans about anything" but then made clear his refusal to budge on the Affordable Care Act.

"We've heard some Republicans make this argument [that] once this is fully implemented ... it will be sufficiently successful and popular that people won't want to repeal it," Obama said. "Well, that's a strange argument."

Republicans stand by their long-held view that the health care law is an unaffordable job killer. Although their current strategy has been a source of controversy even within party ranks, many maintain that the budget process is a perfectly fine vehicle for continuing to push against the Affordable Care Act.

"The president is reaping what he sowed there," says Romina Boccia, a fellow in budgetary affairs at the Heritage Foundation, a conservative think tank that has been an active proponent of the strategy to block the health care law.

"We shouldn't be surprised this is happening now," she says. "The president and his party used [budget] reconciliation, a measure that was never intended to push through a major new entitlement program, on a purely partisan basis."

Beyond The Health Care Debate

It's been a budget fight that's not really about dollars. Majorities in both parties and chambers of Congress are willing to pass bills with the same bottom line.

But with the government shut down, the political debate is likely to turn away from the relatively narrow issue of health care toward larger questions about the impact on the economy and the absence of expected services.

Obama told Inskeep that the government needs to invest in education, infrastructure and putting people back to work.

"Every time we have a government shutdown, the economy is adversely impacted," he said.

Like most economists, Sean Snaith of the University of Central Florida says he's less concerned about a shutdown than the possibility of a debt default down the road.

Still, he says, it won't help matters in an economy that continues to underwhelm.

"We've seen this game of chicken played out before with the entire economy and financial markets held in limbo, up in the stands watching to see how it's all going to play out," Snaith says.

The response of financial markets (which have been trending down daily) and the broader economy are now the wild cards in this game. If things go south quickly, that will force political leaders of both parties to enter into the kind of negotiations that they've scrupulously avoided all year.

"I don't think there's anything Obama can do about the government shutdown," says Stephen Weatherford, an expert on political management of the economy at the University of California, Santa Barbara. "He just needs to keep his fingers crossed that the Republicans in Congress get blamed for it and that pressure leads them to come through with some kind of compromise."

So far, surveys have shown that the public isn't inclined to place all the blame on one side or the other. Republicans,who tend to fare worse in polls than the president, recognize that they lost the political fight over the last government shutdown, back in the winter of 1995-96.

But their constant appearances on cable television in recent days demonstrate that Republican members of Congress aren't assuming they'll have to shoulder all the blame.

"Republicans lost the fight last time, but things have changed a lot," says Keith Hennessey, who directed the National Economic Council under President George W. Bush. "It's not at all clear that the lessons learned from 18 years ago necessarily apply in full force today."

One of the most important things that have changed since then is the media landscape. Neither the Fox News Channel nor MSNBC had even launched at the time of the last shutdown, to say nothing of the proliferation of partisan blogs and social media.

In addition, congressional districts themselves have become far more polarized. Back in 1995, fully a third of the House GOP conference represented districts that Democrat Bill Clinton had won in the last election, notes Dave Wasserman of the Cook Political Report. Today, only 7 percent of the House Republicans come from districts Obama carried last fall.

That means Obama will be stuck dealing with members of Congress from one-sided districts who may remain insulated from any sense of outrage the president manages to stir up through speeches or media appearances.

"It raises a really troublesome question," Weatherford says, "whether the nation as a whole is listening to anybody but their own side."