Accessibility links
Does Where You Shop Depend On Where You Stand? : It's All Politics One big reason for the division in Washington is the growing divide between different kinds of voters back home. 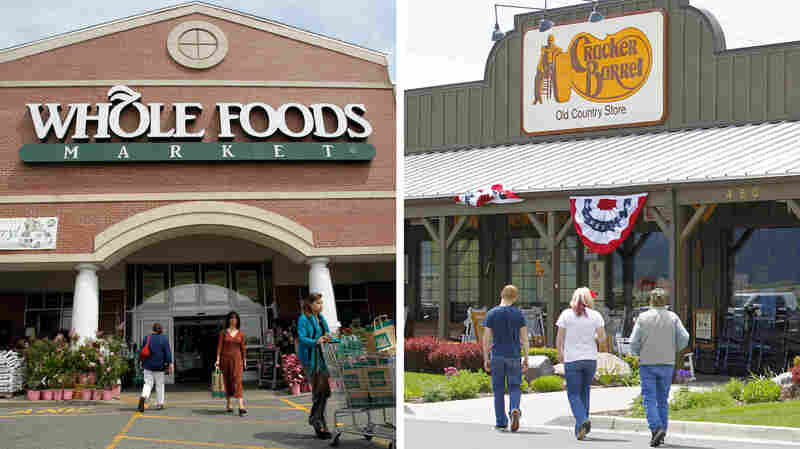 A composite image of a Whole Foods in Providence, R.I., and a Cracker Barrel in Springville, Utah. Steven Senne/AP and/George Frey/Landov hide caption 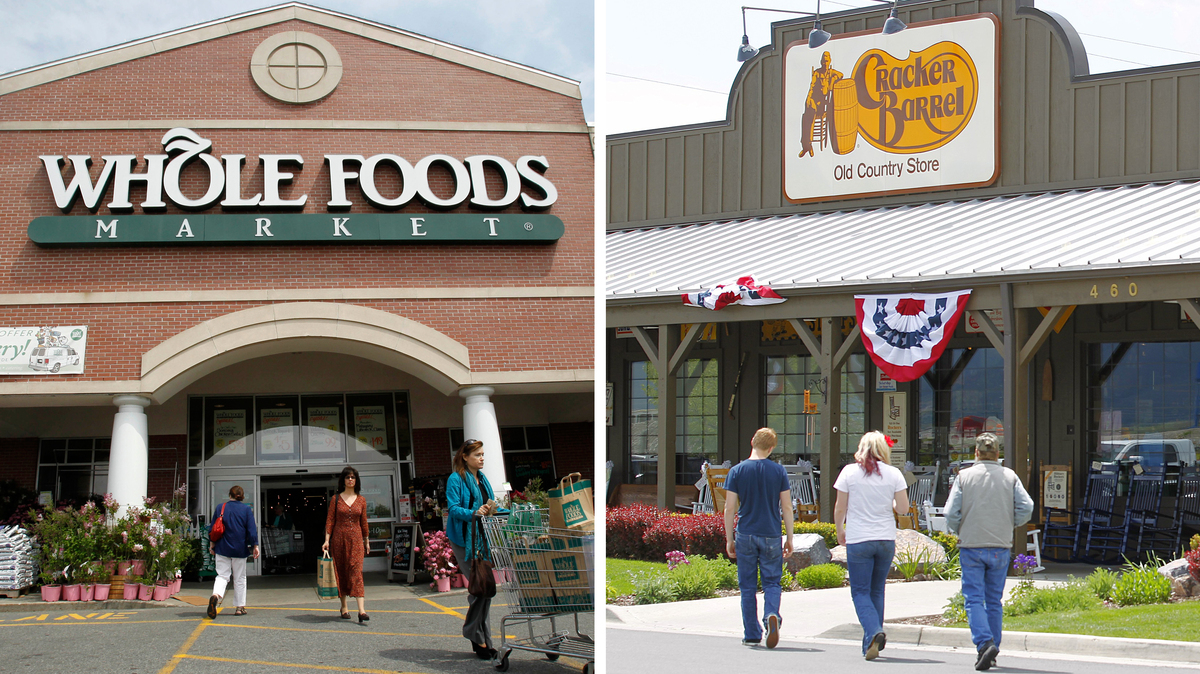 A composite image of a Whole Foods in Providence, R.I., and a Cracker Barrel in Springville, Utah.

The federal government shutdown is now in its second week, and one big reason for the division in Washington is the growing divide between different kinds of voters back home. Those differences make news on Election Day, but they're visible every day.

Members in both parties find less and less common ground, in part because their constituents have such contrasting notions of government's proper role. And those contrasting visions often coincide with contrasting lifestyles — evident in many of the choices they make.

Most Republican districts are heavily populated with Cracker Barrels. The wraparound porch, abundance of rocking chairs and patriotic paraphernalia offer its patrons a sense of nostalgia and traditional values. Whole Foods, on the other hand, works at being hip and health-conscious and can usually be found in most Democratic districts.

Are these businesses purposely aiming for political targets? They don't have to, Wasserman says. They are choosing store locations based on the prevailing local lifestyle. And Americans are increasingly choosing their own locations with lifestyle in mind. This process, which some have called The Big Sort, can be seen as affecting voting behavior as well.

As this sorting process unfolds, one might expect it to reinforce and intensify the previous voting preferences of these communities and reduce the number of swing districts. And there is mounting evidence this is taking place. From 1992 to 2012, the number of congressional districts won in a landslide by one party's presidential candidate or the other has more than doubled, according to an analysis by Nate Silver in The New York Times last December.

Silver found 117 districts where President Obama did much better than his national victory margin — winning by 20 points or more beyond the 5 points he won by nationwide. Republican presidential nominee Mitt Romney ran commensurately ahead of his national showing in 125 congressional districts.

Virtually all those 125 landslide Romney districts also elected Republicans to Congress with similarly lopsided margins. That group accounts for just over half the total of GOP seats in the House. Considering their walking-away wins in November 2012, it's easy to see why so few of them worry about losing to a Democrat in November 2014. It's equally apparent why they are far more likely to be worried about a challenger emerging in their next Republican Party primary.

Such challengers usually emerge from the more conservative wing of the party, much as Tea Party activists took on GOP stalwarts in 2010 and 2012. And that is why the strong views of those activists are so carefully respected by the House Republican leaders in the current shutdown confrontation.

Districts that lean heavily left or right are nothing new, of course. After each census, creative and partisan drawing of district lines tends to protect incumbents and thereby reinforce the political divide. But this long-standing practice of gerrymandering districts is far easier when groups of voters are already largely concentrated by race, income and cultural affinities.