Accessibility links
Tale Of The Tape: Comparing The Budget Committee Heads : It's All Politics As the 29 lawmakers on the bipartisan budget conference committee begin discussions, they'll be led by two negotiators who seem to get along well despite many differences.

Tale Of The Tape: Comparing The Budget Committee Heads

Tale Of The Tape: Comparing The Budget Committee Heads 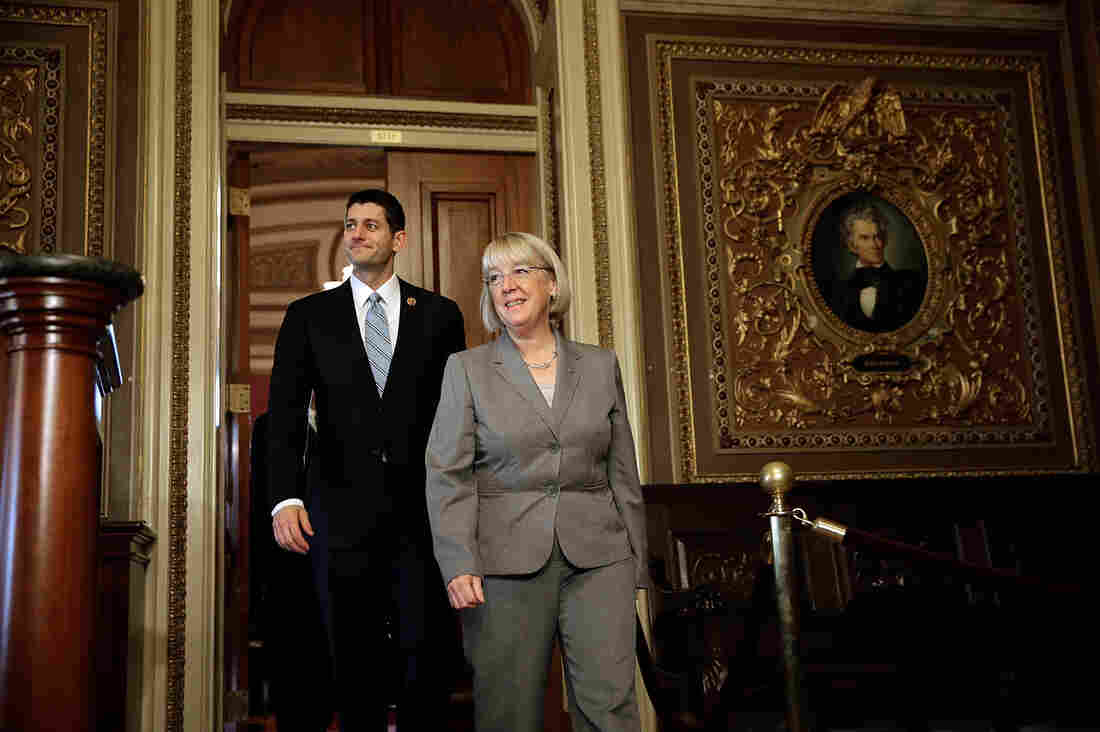 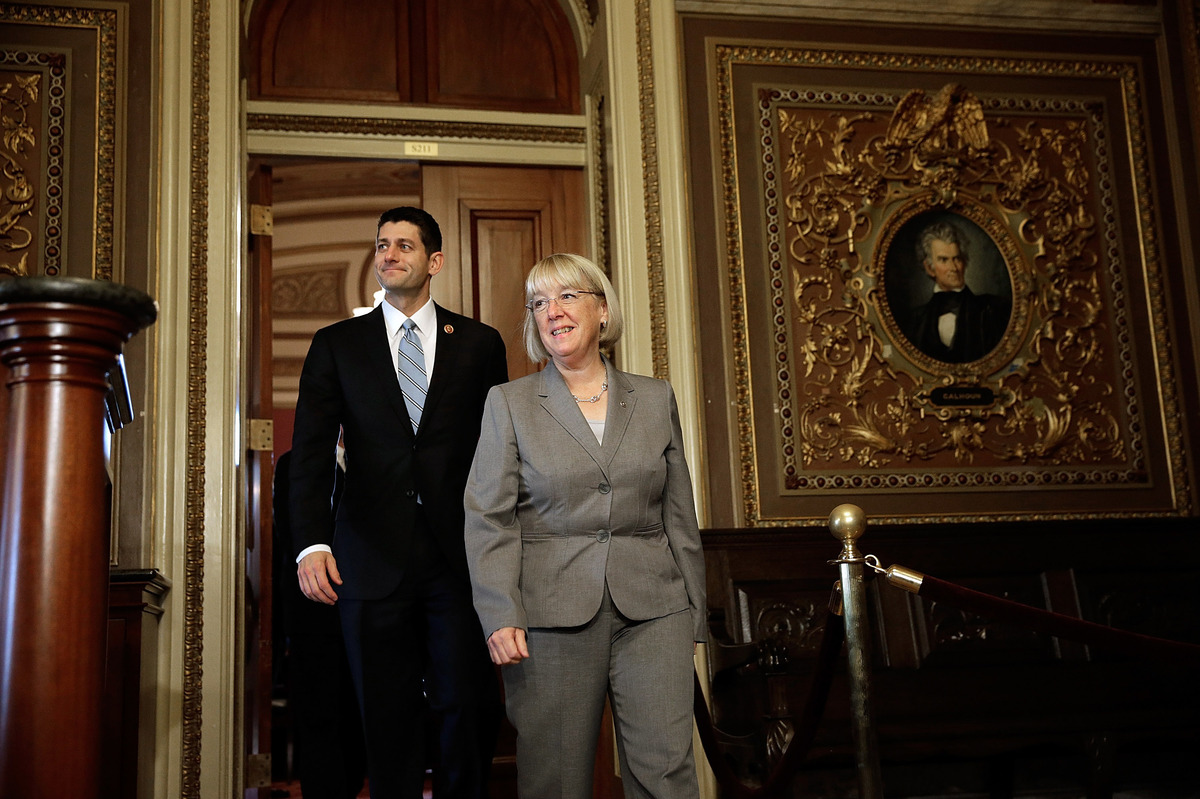 Rep. Paul Ryan, R-Wis., and Sen. Patty Murray, D-Wash., differ in style and ideology but show signs of having a good working relationship.

As the 29 lawmakers on the budget conference committee — 22 from the Senate and seven from the House — sit down to begin negotiations, they'll have in Ryan and Murray two lawmakers who from most accounts get along well despite their many differences.

"I think they've established a good working relationship with mutual respect for each other when you think about how many of our leaders aren't really talking to each other anymore," said Maya MacGuineas, president of the Committee for a Responsible Federal Budget, who has talked about fiscal matters with both lawmakers over the years.

Even so, you couldn't ask for a more striking contrast between two members of Congress in terms of their personal qualities or ideologies.

Here's a tale of the tape for Murray and Ryan:

Ryan: A charismatic fitness buff who revels in the spotlight and discourses on fiscal minutiae the way Jay Z spits rap lyrics. He's 43 years old, in his sixth term and is much better known than Murray thanks to his place on the 2012 Republican presidential ticket with Mitt Romney.

He became such a lightning rod for his 2011 proposal to turn Medicare into a voucher system that President Obama singled him out in a speech as Ryan sat in the front row. Democrats cut an ad featuring an actor portraying Ryan pushing Granny and her wheelchair off a cliff.

Murray: Charisma, or a spot on a national ticket, aren't what immediately come to mind when considering Murray. The 63-year old has quietly impressed her Senate colleagues despite her general colorlessness. In a group of spotlight-seeking egos, she has emerged as a leader, the fourth in the Senate Democrats' chain of command.

Murray has twice run Senate Democrats' election efforts. So she has much experience thinking like a campaign manager who's trying to appeal to her party's political base while expanding the map of potential seat pickups.

Their competing ideologies are best seen in their fiscal 2014 budgets issued early this year.

Ryan: He proposes balancing the federal budget in 10 years with spending cuts and lower interest costs that would amount to $5.74 trillion in savings. He would leave sequestration intact. He also would get there with no tax increases and large cuts to entitlement programs. Most of his proposed savings would come from about $4 trillion in entitlement cuts over 10 years.

Murray: Her budget would leave the budget unbalanced after 10 years and not by a little. She would achieve $1.78 trillion in savings over that period. She would end sequestration, adding nearly $1 trillion in spending over a decade. Much of that spending would be for investments in education, which is close to the heart of the onetime preschool teacher. In one of the biggest differences with Ryan, her proposed budget includes $810 billion in new revenues from higher taxes and fees.

Both were raised in families helped by social-safety-net programs when misfortune struck.

Ryan: He's the youngest of four children. His father died when he was 16, and Social Security survivor's benefits helped his mother pay his college tuition.

Murray: Her father developed multiple sclerosis when she was in her teens. After he could no longer work and before her mother found a job, the family of eight received welfare to survive the lean times.

Murray was co-chairwoman of the supercommittee that failed to achieve an agreement to reduce deficits — which led to the sequester, with its $1 trillion of across-the-board spending cuts over 10 years. So she's truly motivated to have something to show this time.

Both Ryan and Murray have already lowered expectations for their budget conference. There will be no grand bargain on entitlement cuts and tax increases.

Instead, MacGuineas, who has been gathering intelligence from those close to the budget conferees, expects Murray and Ryan to work toward an agreement that would end perhaps part of the sequester cuts, maybe two years' worth. And she doesn't expect major entitlement cuts or tax increases in any final deal. More like changes to government subsidies and farm subsidies.

"Both are loyal to their respective parties but also interested in getting something done," she said.

Murray may have the easier hand to play, however, which could prove an advantage — she can persuasively argue, after the united front Senate Democrats showed in the shutdown-debt ceiling fight, that her party is speaking with one voice. Not so for Ryan.

"What Chairman Murray is doing is keeping a pretty united group united," MacGuineas said. "She's close with leadership. She's close with members of the budget committee. And they're all walking pretty much in lockstep right now."

The Wisconsin Republican congressman has an entirely different hand to play. "Chairman Ryan has a much tougher challenge," MacGuineas says. Ryan is persuasive and respected in the House Republican Conference, as he showed during the shutdown fight when he nudged the House GOP away from the Tea Party focus on derailing the Affordable Care Act.

But "there's a huge diversity of opinion among his conference about what they should be doing." That's putting it mildly.