Accessibility links
9 Elections To Watch : It's All Politics From the Eastern Seaboard to the Pacific Northwest, there's a colorful and compelling roster of political contests on Tuesday. Many of them have national implications, including a gubernatorial contest in New Jersey and a special congressional runoff in Alabama. 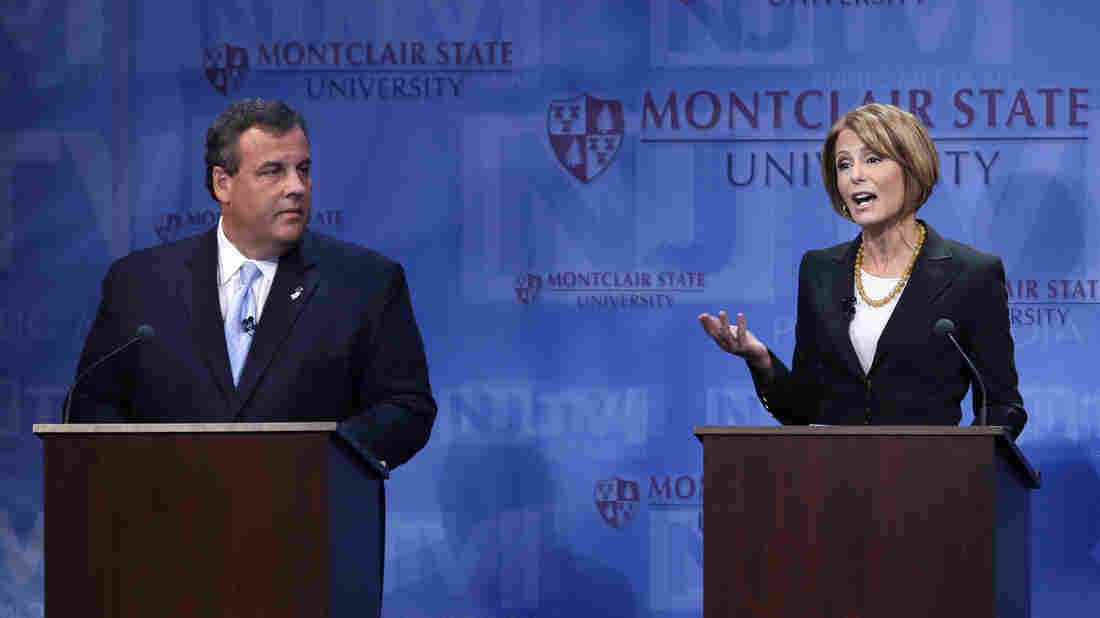 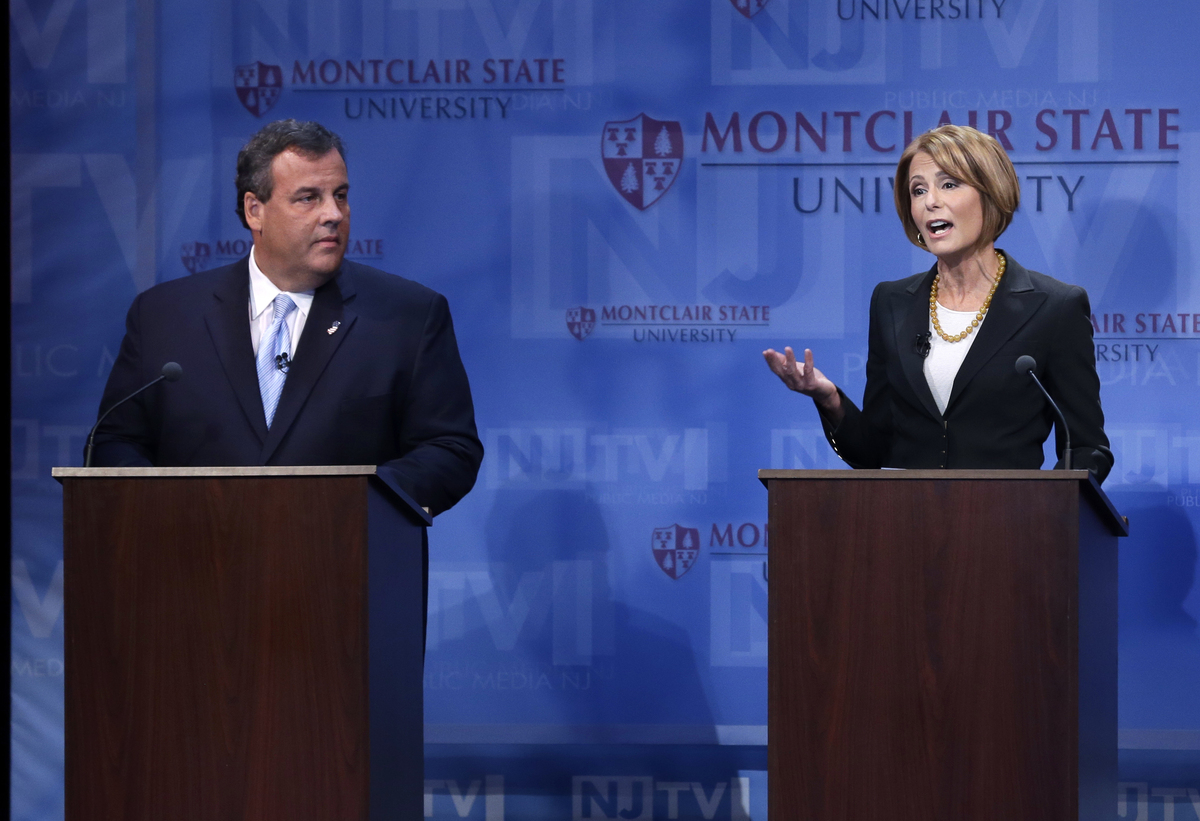 Tuesday's elections are anything but dull. From the Eastern Seaboard to the Pacific Northwest, there's a colorful and compelling roster of political contests. Although there isn't anything close to the drama of an Election Day in a presidential year, many of the races have national implications.

In Boston and New York, it's the end of a political era as those cities prepare to replace longtime mayors. In New Jersey and Virginia, there are high-profile gubernatorial races that could shape the future of the Republican Party — and possibly the 2016 presidential race. Among the lesser-known contests, an Alabama special congressional runoff lays out the battle lines in the GOP's civil war in stark detail.

Almost everyone expects Republican Gov. Chris Christie to win re-election. The only question is by how much.

The margin matters a great deal because a blowout Christie win will serve as his springboard into the 2016 presidential race. He doesn't even try to deny it anymore. A runaway victory Tuesday will provide Christie with a compelling case for a 2016 candidacy — especially if he shows coattails in state legislative races, or any kind of traction with African-American or Hispanic voters.

He'll be positioned to argue that he's a conservative who can win in one of the most Democratic states in the nation, and his winning record in a state that President Obama carried by 17 percentage points will be hard for Republicans to ignore after two consecutive GOP presidential losses. 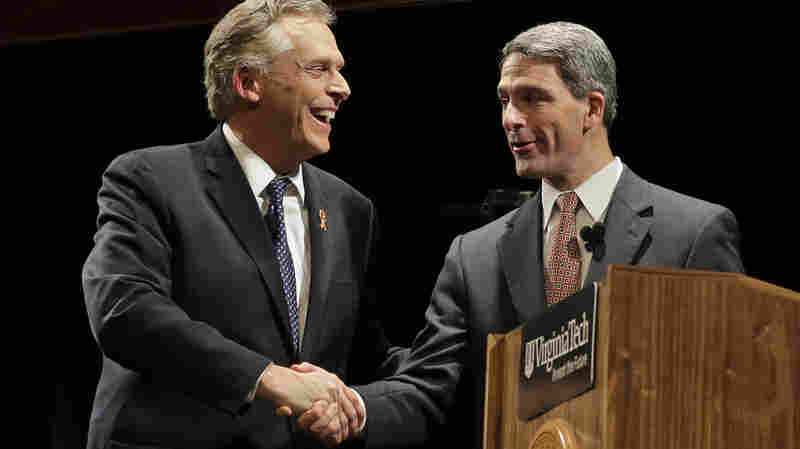 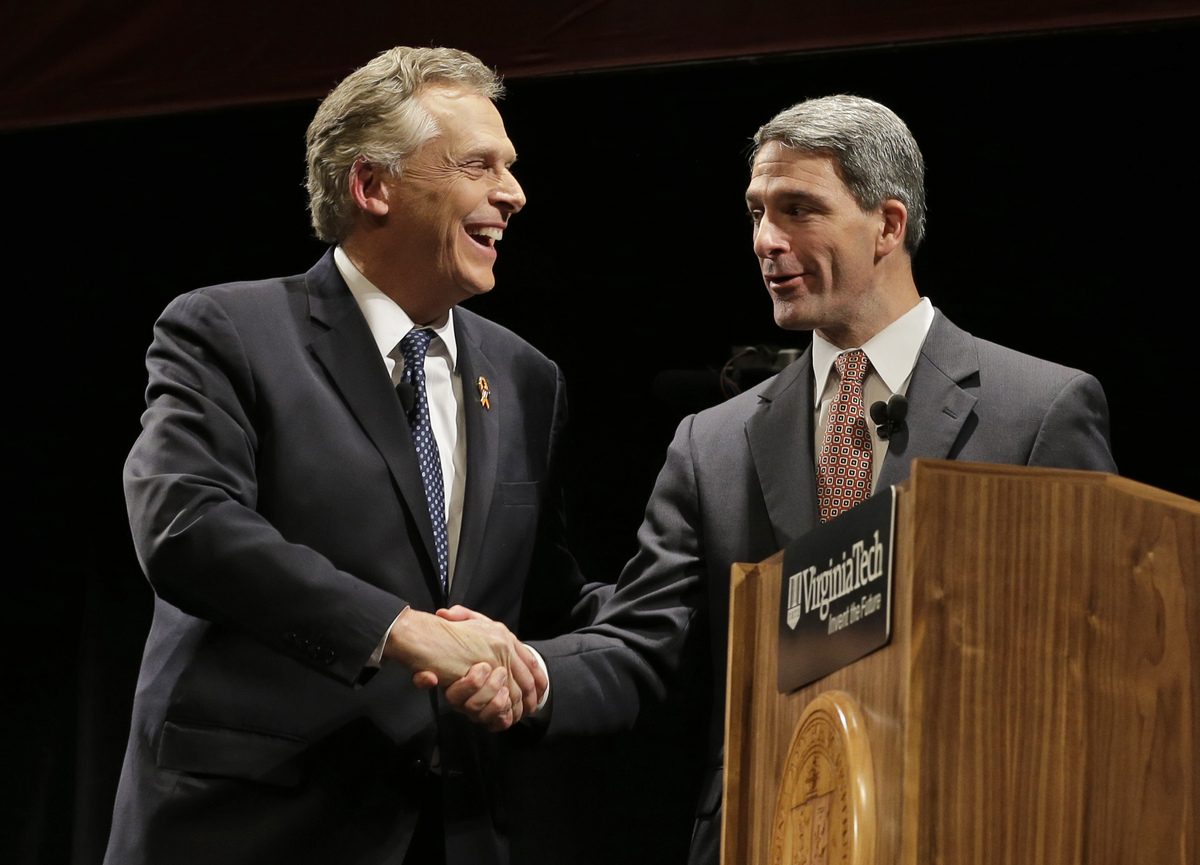 Democrat Terry McAuliffe (left) shakes the hand of Republican Ken Cuccinelli after a debate in the Virginia governor's race on Oct. 24.

Republican Ken Cuccinelli has trailed in the polls for months. He's struggled to connect with independents and female voters. Even among Republicans, his numbers aren't stellar.

The outlook seems grim for the conservative Cuccinelli, the state's polarizing attorney general, but there's one saving grace: Democratic nominee Terry McAuliffe, the former Democratic National Committee chairman, has been criticized for being a little too slick and superficial, and he's failed to put the race away.

If McAuliffe wins, his victory will put a close Clinton family ally in the governorship of a key swing state. And it will mark the first time since 1973 that Virginia voters elect a governor from the political party of the sitting president. 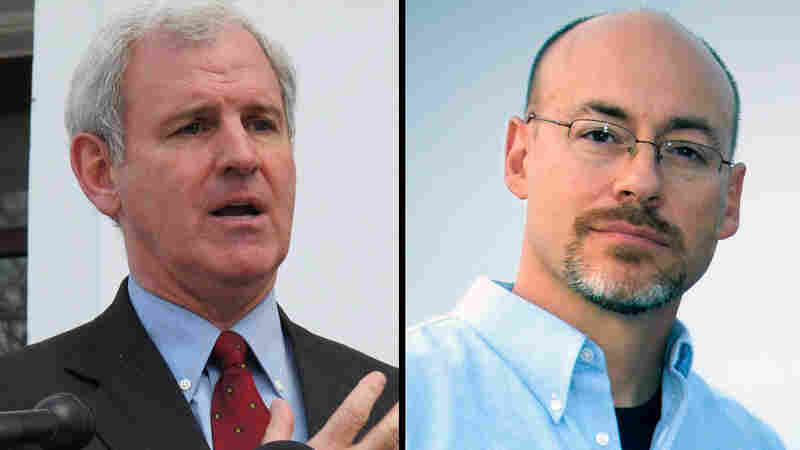 Bradley Byrne (left) and Dean Young are vying for a congressional seat in a special election in Alabama. Phillip Rawls and Campaign of Dean Young/AP hide caption 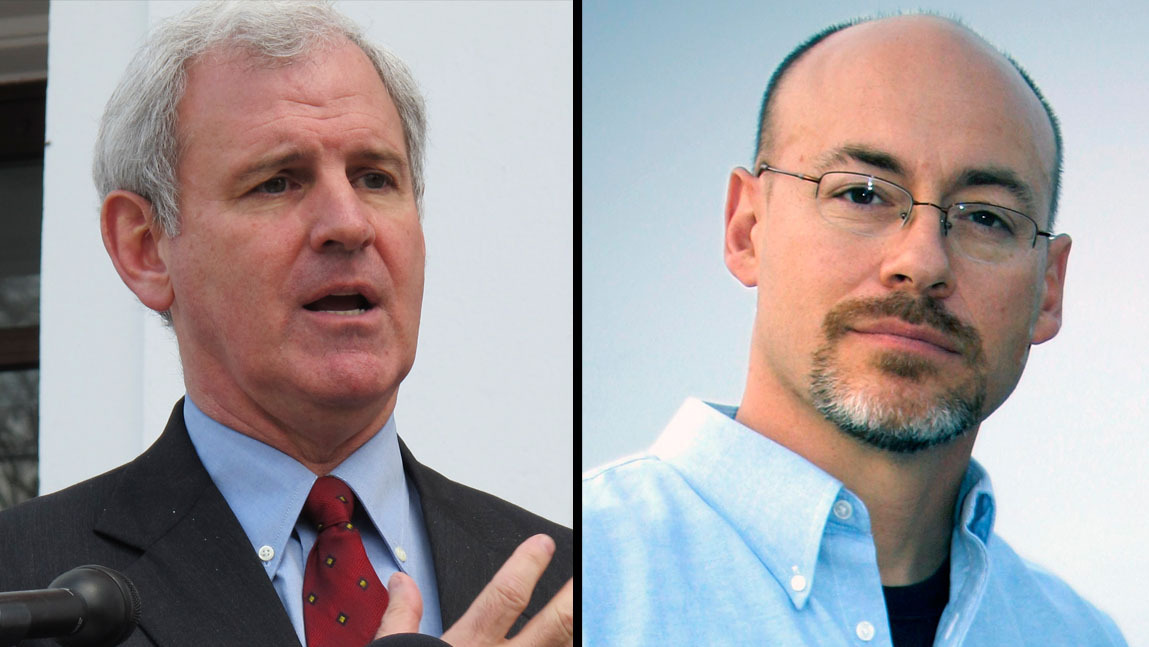 Bradley Byrne (left) and Dean Young are vying for a congressional seat in a special election in Alabama.

There's a reason you've heard next to nothing about this special election: It's an overwhelmingly Republican seat, one that's all but certain to send a new GOP congressman to Washington. But the kind of Republican who wins Tuesday is why this southern Alabama race matters.

The 1st District contest is a classic match-up between an establishment-backed conservative, Bradley Byrne, and a Tea Party-oriented foe, Dean Young. Byrne is a former state senator and candidate for governor who's gotten a late infusion of cash and support from House GOP leaders and the Chamber of Commerce. Young, who's powered by conservative grassroots energy, has a penchant for making controversial remarks and says he wouldn't vote for John Boehner for speaker.

Young described his style this way during a recent radio interview: "[Voters should get] a big ole thing of popcorn and a Big Super Gulp and lean back and turn on C-SPAN. Because I promise you, I will stand on the floor of the House and stand for the principles that we believe in that made this nation great."

This down-ballot race wouldn't be so important if not for the prospect of a Democratic sweep of Virginia's top offices. With Republicans bracing for defeat in the governor's race and an even bigger loss in the lieutenant governor's race, that leaves this neck-and-neck contest for attorney general as the party's last, best hope.

Republicans have poured cash into state Sen. Mark Obenshain's campaign in an attempt to overcome the efforts of another state senator, Democrat Mark Herring, to portray Obenshain as a right-wing ideologue — the same criticism lodged against the GOP's other statewide nominees.

With its avalanche of out-of-state and independent group spending — at least $2.5 million has poured in — the special election in Washington's 26th Legislative District now ranks as the most expensive legislative race in state history. Among the big spenders: liberal California hedge fund billionaire Thomas Steyer.

Why the interest in this relatively obscure Puget Sound-area seat? Republican state Rep. Jan Angel has ties to the American Legislative Exchange Council, a pro-corporate, conservative group that's under attack from progressives, and both parties view the election between Angel and Democratic state Sen. Nathan Schlicher as pivotal to control the closely divided state Senate in 2014. 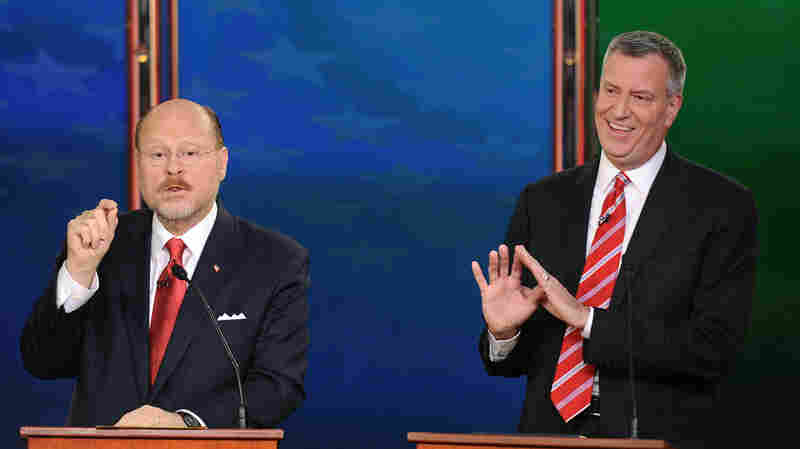 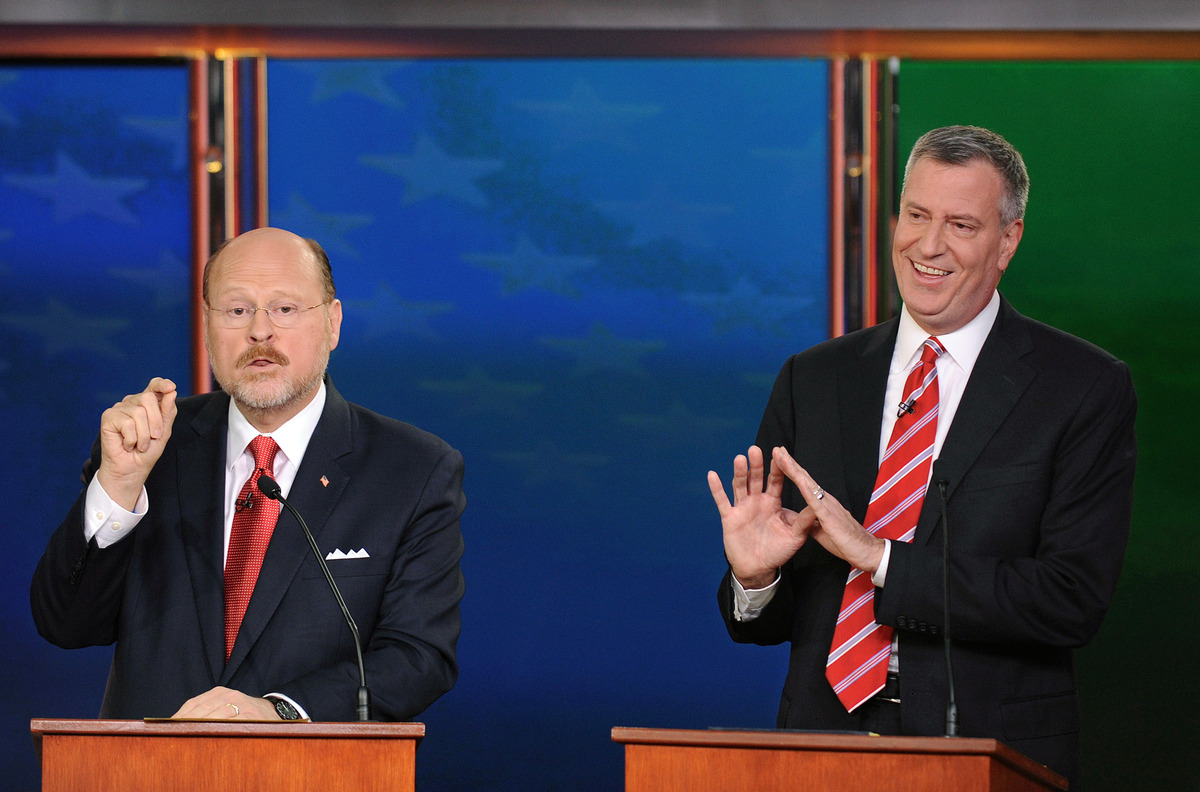 Republican Joe Lhota (left) makes a point during a debate with Bill de Blasio, his Democratic rival in the New York City mayor's race, on Oct. 30.

It's hard to believe: America's largest city hasn't elected a Democratic mayor since 1989. But New York is poised to break that streak this year by electing Democrat Bill de Blasio, the city's public advocate.

De Blasio, who has a formidable lead in the polls over Republican Joe Lhota, has promised a dramatic break from the policies of outgoing three-term Mayor Michael Bloomberg — in fact, he has described his vision as an "unapologetic progressive alternative to the Bloomberg era."

In the close race to succeed Tom Menino, Boston's longest-serving mayor, there are notable stylistic differences between the two progressive candidates vying to succeed him: Backers of state Rep. Marty Walsh, the son of Irish immigrants, have framed City Councilor John Connolly as a "son of privilege."

But there aren't many major policy differences between Connolly and Walsh. Education policy has emerged as a key issue, with Connolly embracing the role of reformer. Another key flashpoint: Walsh's close relationship with labor unions and its effect on his ability to govern.

Boston mayoral races are officially nonpartisan, but the city hasn't elected a Republican to City Hall since 1926. 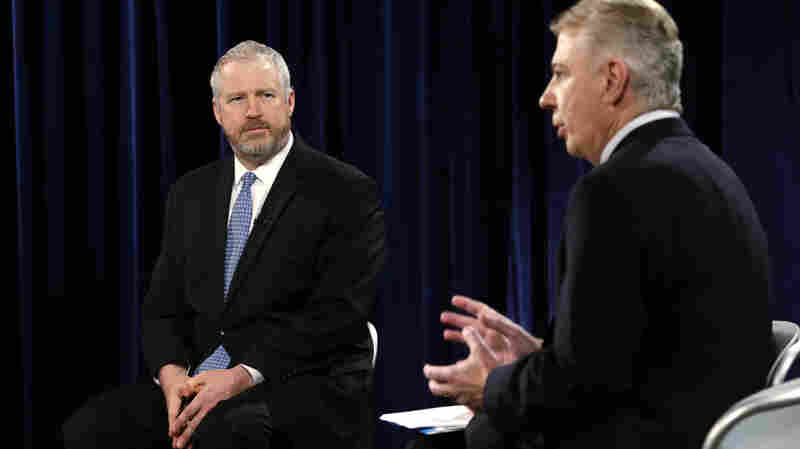 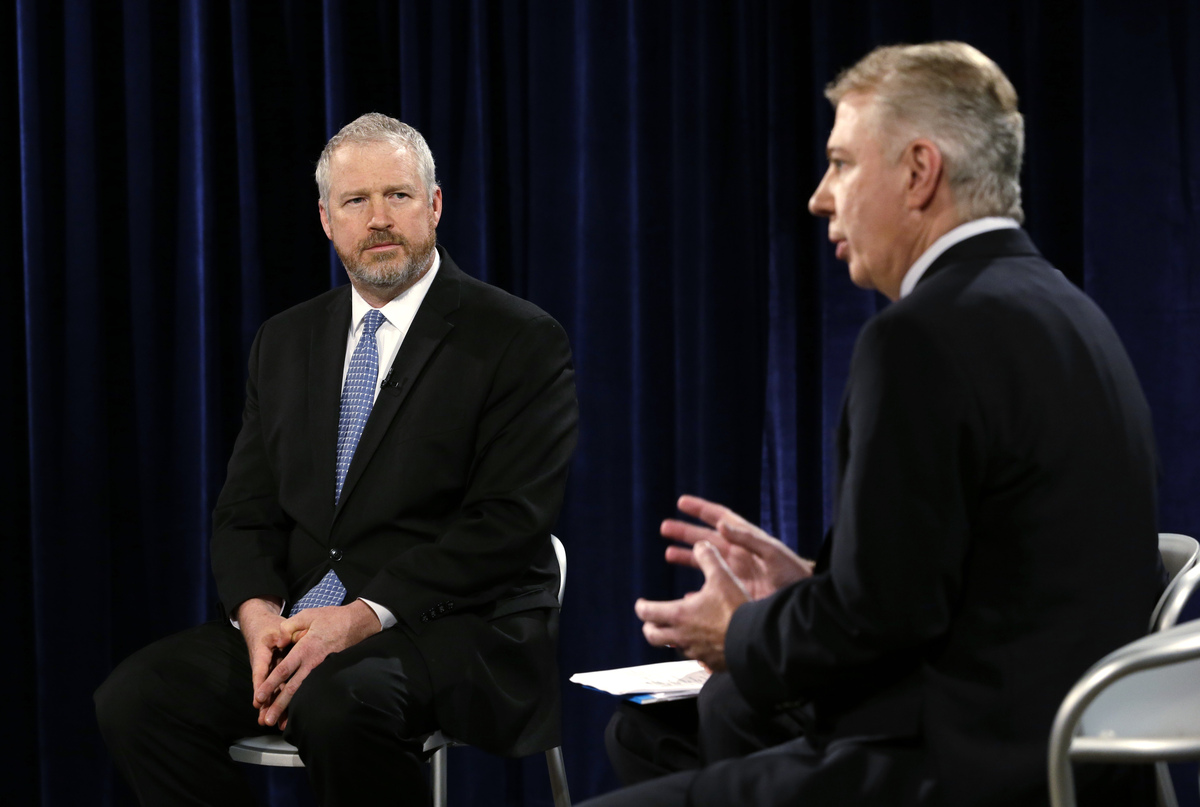 Seattle Mayor Mike McGinn (left) listens as state Sen. Ed Murray answers a question during a debate in their race for mayor on Oct. 9.

In another battle between two progressives, Mayor Mike McGinn is at risk of being ousted after a single term. Polls have shown his opponent, state Sen. Ed Murray, with a comfortable lead, and Murray's liberal record — he helped shepherd passage of the state's gay marriage legislation — has insulated him from some of McGinn's attacks in the heavily Democratic city.

McGinn's predicament is somewhat unusual: Seattle's economy continues to hum and the mayor isn't enmeshed in scandal. But his confrontational style has proved abrasive enough to alienate many, and Murray has gotten traction with the promise of a more inclusive and less provocative governing style.

In the decades following World War II, Nassau County was home to the nation's pre-eminent suburban Republican machine. But the GOP's hold on the giant Long Island suburb began to loosen in the 1990s. By 2002 the unthinkable happened: A Democrat, Tom Suozzi, won the powerful post of county executive.

In a harbinger of the national Republican sweep to come — and its focus on taxes, debt and spending — the GOP knocked off Suozzi in a 2009 upset. But now he's back, looking to unseat GOP County Executive Edward Mangano in a rematch. Demographics — the county continues to become more Democratic and more diverse — and the national GOP brand are working against Mangano. But the issues in play — property taxes, debt, spending, the county's longstanding troubled finances — could work to his advantage.

Either way, the outcome is likely to provide valuable insights into the mood of the suburban electorate.