Accessibility links
Turnover Time: Celebrated Generation Of Mayors Leaves Office : It's All Politics Several of the nation's largest cities, including New York, Boston and Detroit, elected new mayors on Tuesday. The new leaders will spend much of their time dealing with pension and health care costs. 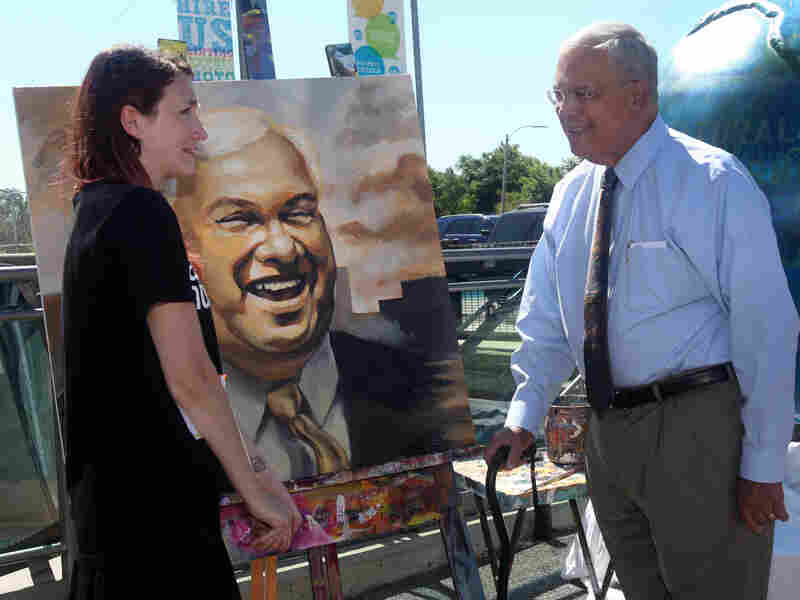 Sadia Bies and Boston Mayor Thomas Menino stand next to her portrait of him at a July press conference. Menino, the city's longest-serving mayor, is stepping down at the end of his term. Aynsley Floyd/Invision for Gillette hide caption 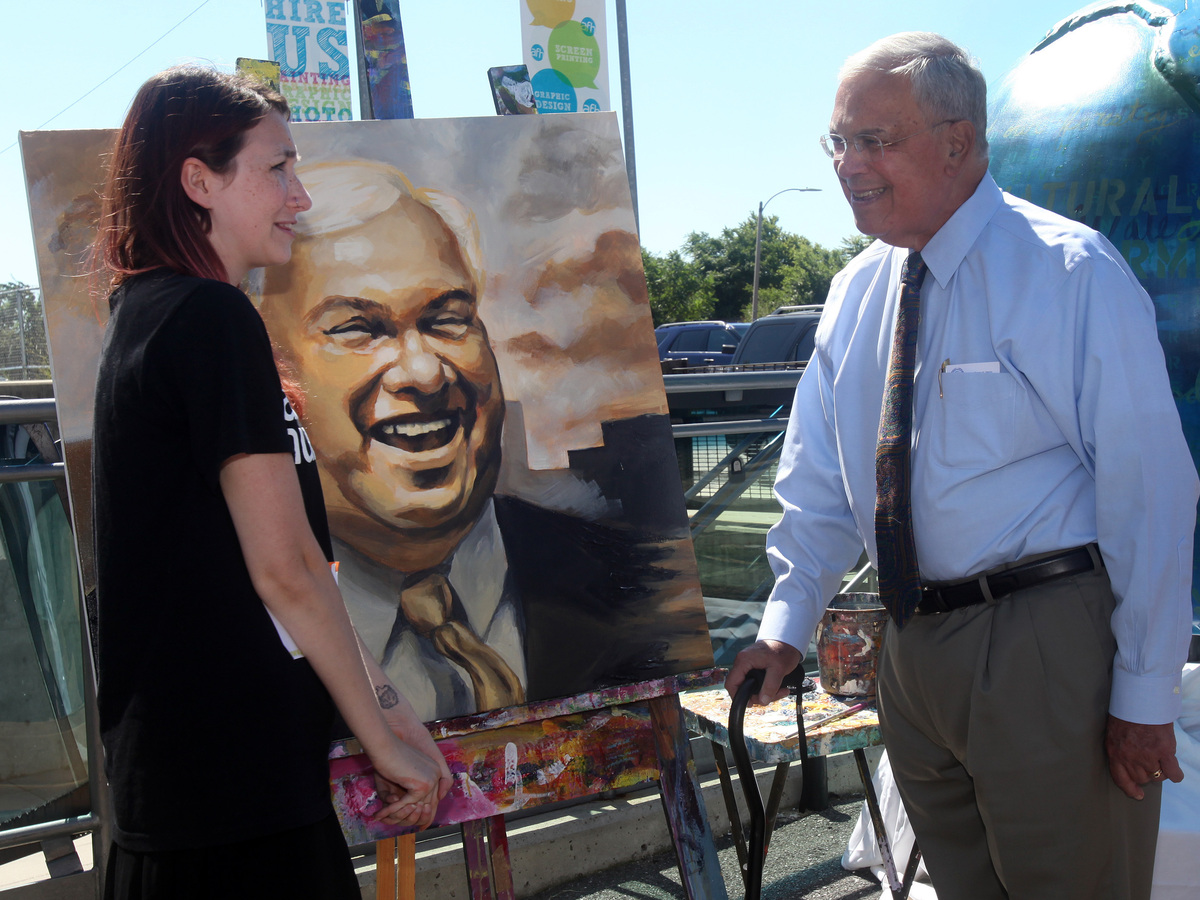 Sadia Bies and Boston Mayor Thomas Menino stand next to her portrait of him at a July press conference. Menino, the city's longest-serving mayor, is stepping down at the end of his term.

Many of the nation's largest cities are about to get what polls suggest Americans want in Washington: an entirely new group of leaders.

Some of the nation's longest-serving big-city mayors are leaving office, including Michael Bloomberg of New York, who has been in office for a dozen years, and Tom Menino of Boston, who has held his post for 20.

"In my view, we've had some amazing leadership at the local level," says Ralph Becker, the mayor of Salt Lake City. "That makes it a fun time to be in local government, unlike being at the state or certainly the federal level."

Minneapolis, Charlotte, Detroit, Pittsburgh, St. Petersburg and Seattle also elected new mayors on Tuesday. On Nov. 19, San Diego voters will be picking a replacement for Bob Filner, who resigned in August after having accosted numerous women.

The new crop of mayors will have at least one problem in common. They are likely to get less help from their states and the federal government than their predecessors, even while their personnel costs are continuing to rise.

"The pension and health costs of cities are large and growing, and a huge threat to anything else that any incoming mayor wants to do," says Daniel DiSalvo, a senior fellow at the Manhattan Institute, a conservative think tank.

"Until they get a grip on those, it's hard to see much of new initiatives that can be launched," he says.

New Ideas But No Money

The turnover with Tuesday's elections follows recent mayoral changes in Chicago and Los Angeles. This changing of the guard will have significance beyond the borders of these individual cities.

The outgoing generation of mayors pioneered ideas that were widely disseminated and copied by other local leaders, on issues ranging from climate change to gun control.

Bloomberg alone was famous — or notorious — for his health regulations, including bans on indoor smoking and trans fats, as well as an abortive attempt to limit large sodas.

Following larger-than-life figures who have held power for a long time is always a challenge, says James Brooks, a program director for the National League of Cities. But the new mayors will bring with them new staffs and new ideas.

"One thing that's likely is outreach to nontraditional stakeholders who perhaps did not get their fair shake or have easy access in the old days," Brooks says.

Certainly, long-standing regimes can grow tired, their ideas fossilized. The problem for the newcomers, though, is that they may not have enough money to try out many new ideas.

"It's going to be a challenge politically to walk the tightrope of raising the revenues many cities need for pension and health costs, while delivering the normal services," says David Swindell, who directs the Center for Urban Innovation at Arizona State University.

The Example Of Rahm

In this sense, Rahm Emanuel may be in the vanguard of the new generation of mayors. He gave up his job as President Obama's chief of staff to become mayor of Chicago in 2011, succeeding 22-year incumbent Richard M. Daley.

Emanuel inherited a city that had enjoyed a major building boom and a gleaming downtown, but also was losing population and was home to some of the worst pockets of poverty in the country.

He's grappled with two major challenges in office — the city's notorious murder rate and finances that are being seriously dragged down by pension debt.

"Rahm has taken on all the issues, in his own way," says Paul Green, a longtime observer of Chicago politics at Roosevelt University. "Whether you like him or not, he's had the guts to take them on — you can't finesse it any longer."

Chicago may be an extreme case, but other cities will have to confront similar problems.

A recent survey by the National League of Cities found that local finances are improving, with most cities better equipped to pay their bills for the first time since 2006.

But the same survey found that cities face long-term problems created by persistent rates of unemployment and inadequately financed pension and health benefits. Some cities have just about run out of cash.

Not All Gloom And Doom

Local officials always like to complain. The feds pass their problems down to the states, which leads the states in turn to take things out financially on their cities and counties.

Mayors are like the younger sibling with no one to hand their problems off to. In a way, that has forced them to keep innovating.

There's a reason the leading candidates for mayor in cities like New York and Boston addressed topics such as education and crime pretty much with generalities, says DiSalvo, the Manhattan Institute fellow.

"The lack of real policy proposals have been highlighted by the campaigns," he says. "In that regard, it's very hard to predict what these guys might do."

Becker, the mayor of Salt Lake, notes that he took office in 2008, at a time when municipal finances were turning most dire. But he's been able to oversee some major development projects nonetheless, while responding to community expectations for a city that's both more walkable and sustainable.

"People are continuing to look more and more at our cities as places where we want to live," he says. "How do we provide that environment?"

It's easy to think of mayors as dealing with quintessentially local problems — potholes and streetlights, says Jennifer Bradley, co-author of The Metropolitan Revolution, a recent book on local leadership.

The incoming mayors, she suggests, will have to steal a page from those they replace — looking outside their city's borders for networks and ideas to address problems they all have in common, such as boosting their economies and addressing the skills gap that is exacerbating income inequality.

"It's doesn't look like the federal government is going to be leading the way," Bradley says. "It's up to mayors to say what we are going to do."