Accessibility links
Close, Closer, Closest: A Guide To Election Photo Finishes : It's All Politics Democratic state Sen. Mark Herring leads Republican state Sen. Mark Obenshain by a mere 117 votes in the Virginia attorney general's election. If it remains that close after a recount, the race will rank as one of the closest statewide contests in modern history. 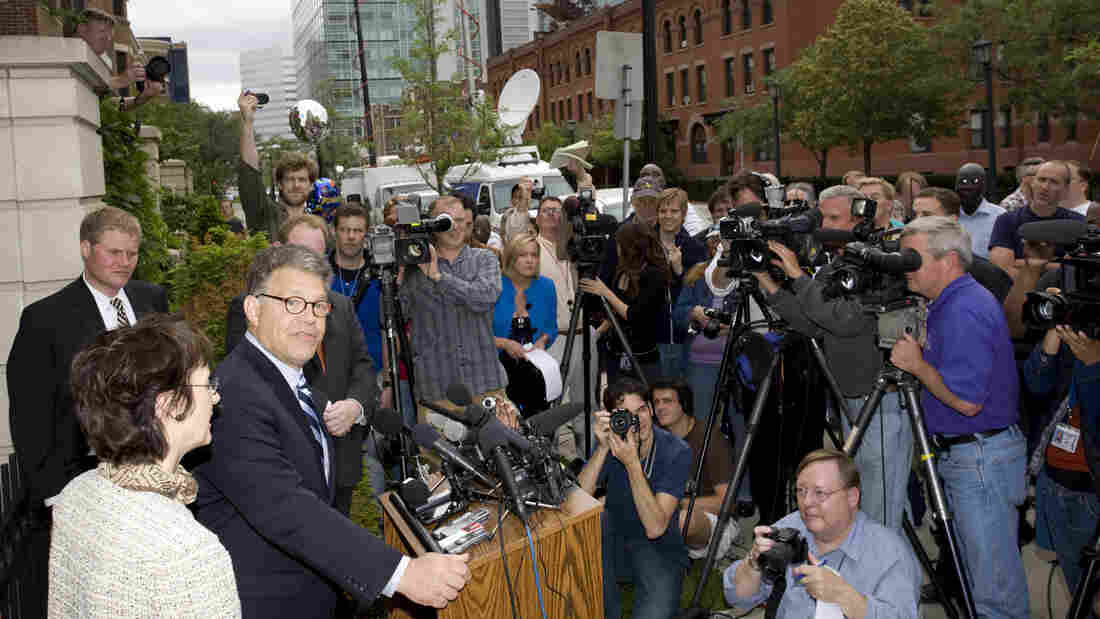 Democrat Al Franken, with his wife, Frannie, meets reporters and a small gathering of supporters at their house in Minneapolis on June 30, 2009, after the Minnesota Supreme Court ruled in favor of the Democrat in the Senate race against Republican Norm Coleman. Andy King/AP hide caption 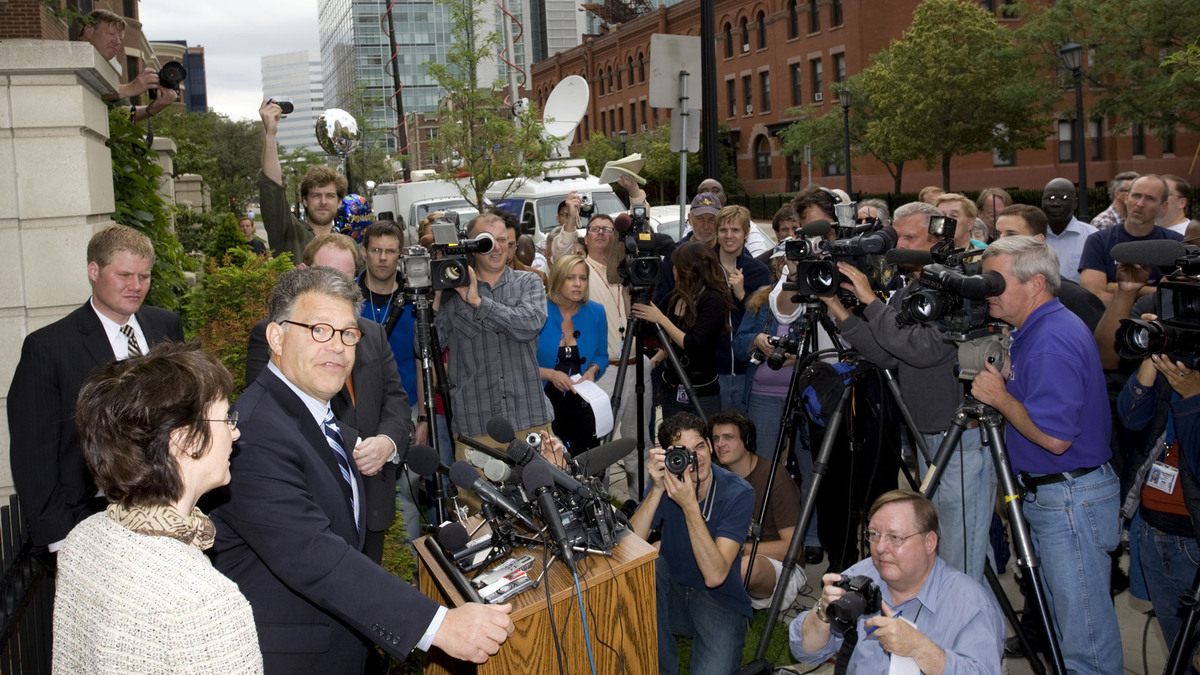 Democrat Al Franken, with his wife, Frannie, meets reporters and a small gathering of supporters at their house in Minneapolis on June 30, 2009, after the Minnesota Supreme Court ruled in favor of the Democrat in the Senate race against Republican Norm Coleman.

The Virginia attorney general's race, which cut a relatively low profile heading into Election Day, now has a chance to end up as part of history.

With more than 2.2 million ballots cast and Democratic state Sen. Mark Herring leading Republican state Sen. Mark Obenshain by a mere 117 votes, the election is shaping up as one of the closest statewide contests in decades.

With a recount looming, the winner isn't expected to be officially declared until December. But in the meantime, here's a look back at some of the closest statewide elections of the past five decades:

John F. Kennedy, then a U.S. senator from Massachusetts, defeated Vice President Richard Nixon by 115 votes in Hawaii the year after it officially joined the U.S. The state's three electoral votes didn't matter much in the grand scheme of the election, as Kennedy won the Electoral College 303 to 219. But he won the nationwide popular vote by fewer than 113,000 votes.

It took the state more than four months to determine the victor, but Lt. Gov. Karl Rolvaag of the Democratic-Farmer-Labor party won the 1962 Minnesota gubernatorial election by just 91 votes over sitting GOP Gov. Elmer Andersen. More than 1.2 million voters cast ballots in the election.

Democrat Howard Cannon, who served in the Senate for 24 years, experienced his closest race in 1964, when he beat then-Lt. Gov. Paul Laxalt by 48 votes out of nearly 135,000 cast. The results didn't stunt Laxalt's political career: He went on to win election as governor, ended up serving with Cannon as Nevada's junior senator and served as chairman of the Republican National Committee.

More than 233,000 ballots were cast, but New Hampshire's 1974 U.S. Senate election was ultimately decided by just two votes. Republican Rep. Louis Wyman defeated Democrat John Durkin, the state's insurance commissioner, by the slimmest of margins after two recounts. But the results remained disputed, and the Senate ultimately called for a new election, which took place in September 1975. Durkin won that contest by 27,000 votes.

Harry Reid, the current Senate majority leader, barely won his third term in November 1998. Just 428 votes separated Reid and his Republican challenger, then-Rep. John Ensign, out of nearly 436,000 cast. Despite the narrow margin, Ensign chose not to contest the results. Ensign went on to win the state's other Senate seat two years later but was forced to resign in 2011 after he had an affair with a staffer.

George W. Bush defeated Al Gore by 537 votes out of nearly 6 million in cast in Florida, delivering not only the state's 25 electoral votes but the presidency in one of the most infamous election outcomes in history. The Supreme Court halted the state's second recount effort in a controversial decision about a month after the election, giving Bush the victory.

While it didn't garner anywhere near the attention that Florida did, the 2000 presidential election results were actually closer in New Mexico from a raw vote standpoint. Gore carried the state over Bush by just 366 votes out of nearly 600,000 cast. It took 10 days to officially declare Gore the winner, but since the state was only worth five electoral votes, it did not make a difference in the overall outcome.

Following two recounts — one machine, one manual — then-Attorney General Christine Gregoire, a Democrat, defeated GOP state Sen. Dino Rossi by 133 votes out of more than 2.8 million cast. Gregoire was officially sworn into office on Jan. 12, 2005, but Rossi did not actually concede for five more months as the Republican Party challenged the results unsuccessfully in court. Rossi ran against Gregoire again in 2008, losing by 6 percentage points.

Virginia is no stranger to tight attorney general races: The 2005 election was also decided by just a few hundred votes. Current Republican Gov. Bob McDonnell, who was a member of the state's House of Delegates at the time, beat out then-Democratic state Sen. Creigh Deeds by 323 votes out of more than 1.9 million cast. The two would meet again four years later in the gubernatorial election, where McDonnell came out on top by 17 percentage points.

In one of the longest-lasting Senate battles ever, Democrat Al Franken edged incumbent Republican Norm Coleman by 312 votes out of nearly 2.9 million cast. After an eight-month legal fight, Coleman officially conceded at the end of June 2009 once the Minnesota Supreme Court declared Franken the winner. Franken was sworn in on July 7, giving the Democrats a 60-seat Senate majority.