Accessibility links
Facing Media Blitz, Obama Leans On Football Metaphors : It's All Politics It came as little surprise that President Obama, an avid sports fan, leaned heavily on sports metaphors at his press conference Thursday to help explain the problems the administration has experienced rolling out the Affordable Care Act. His recent predecessors had similar tendencies when they wanted to convey ideas to the American public in simpler terms. 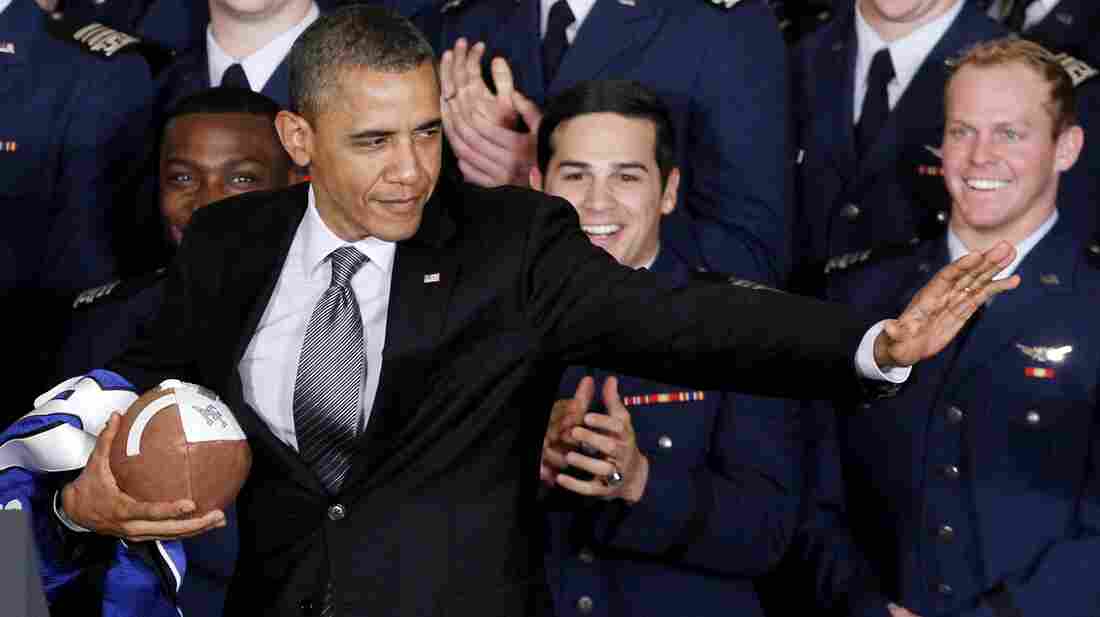 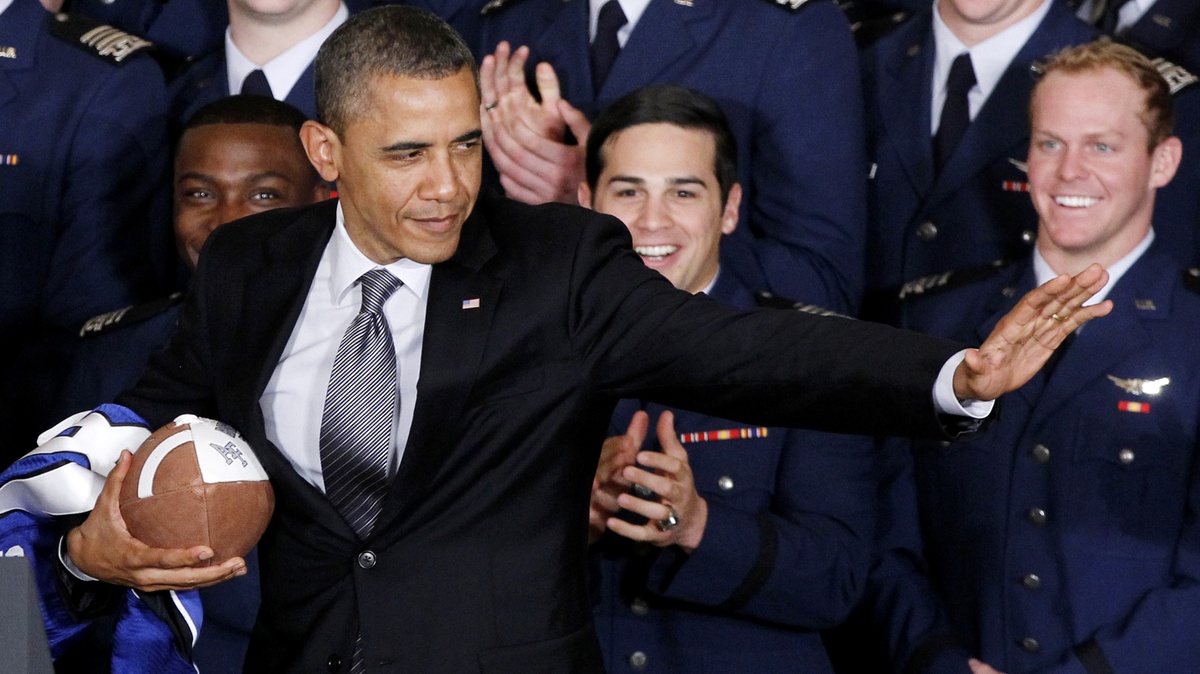 President Obama strikes the Heisman Trophy pose after he awarded the Commander-in-Chief Trophy to the Air Force Academy football team in April 2012.

It's well known that President Obama is an avid sports fan: he had a basketball court installed at the White House shortly after taking office, fills out his NCAA tournament bracket on ESPN every year and often hits the links on weekends.

So it comes as little surprise that Obama leaned heavily on sports metaphors at his press conference Thursday, where he took responsibility for the problems the administration has experienced rolling out the Affordable Care Act and explained how he plans to fix things.

On four separate occasions in the 50-minute question-and-answer session, the president looked to football to characterize the White House's flub on the health care law's implementation.

Gridiron analogies have proved useful to Obama in the past. On the 2012 campaign trail, Obama — a Chicago Bears fan — employed an extended football metaphor to explain Mitt Romney's economic plan, concluding it should be "punted away."

And when Obama was pushing his health care proposal through Congress in the first place, he was known to use a football field to show how close they were to succeeding. About a month and a half before he signed the bill, Obama said they were on "the five-yard line."

"We're in the red zone," Obama said at a February 2010 Nashua, N.H. town hall, referring to the area of the field between the 20-yard line and the goal line. "We've got to punch it through."

His recent predecessors also had a habit of leaning on sports analogies when they wanted to convey ideas to the American public in simpler terms. As President George W. Bush, a former co-owner of baseball's Texas Rangers, was wrapping his tenure in the Oval Office, he often liked to say "I'm going to sprint to the finish."

Ahead of the 2006 mid-term elections, as Democrats appeared poised for a major victory, Bush warned his rivals to not celebrate prematurely.

"They're dancing in the end zone," Bush said at a September 2006 news conference. "They just haven't scored the touchdown."

But the Democrats were ultimately able to spike the ball that November, gaining 31 seats in the House of Representatives, enough to take control of the chamber.

President Bill Clinton, who appeared on the cover of Sports Illustrated in 1994 wearing an Arkansas Razorbacks jacket and holding a basketball, also used sports analogies from time to time, even to help clarify his second-term decision to take military action in Kosovo.