Accessibility links
Education Secretary Loses Some Of His Luster : It's All Politics Arne Duncan has expressed regret for his dismissive comment about the opposition of "white suburban moms" to Common Core standards, but the flap won't soon be forgotten.

Education Secretary Loses Some Of His Luster

Education Secretary Loses Some Of His Luster 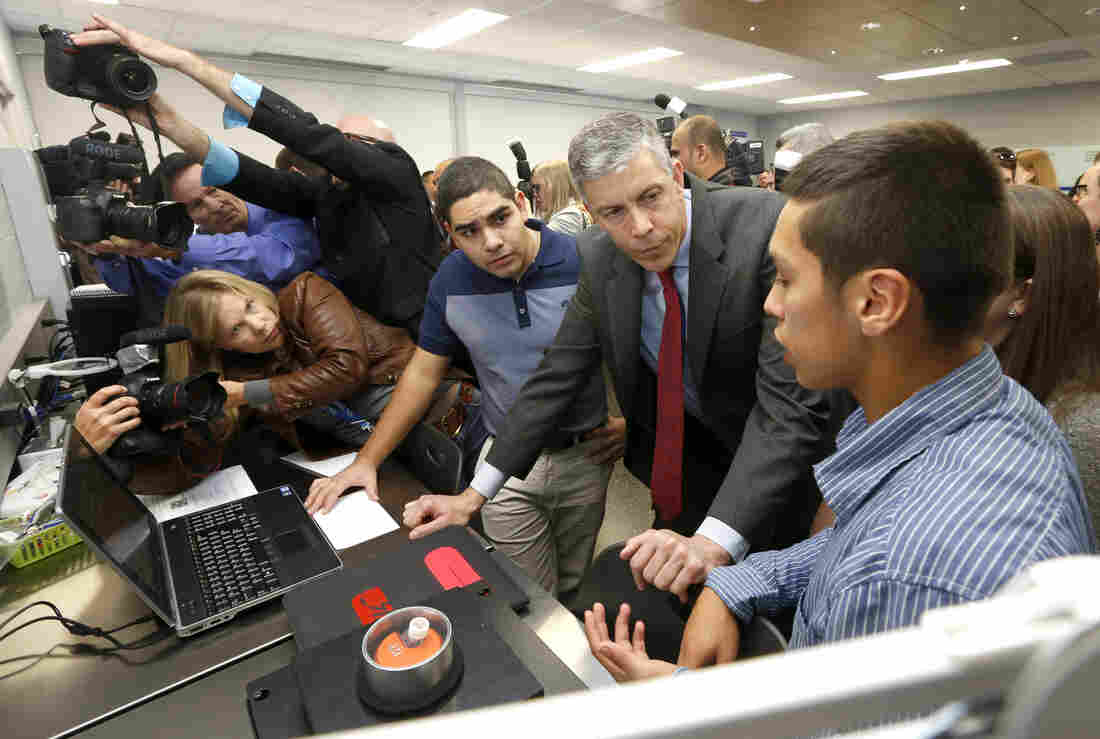 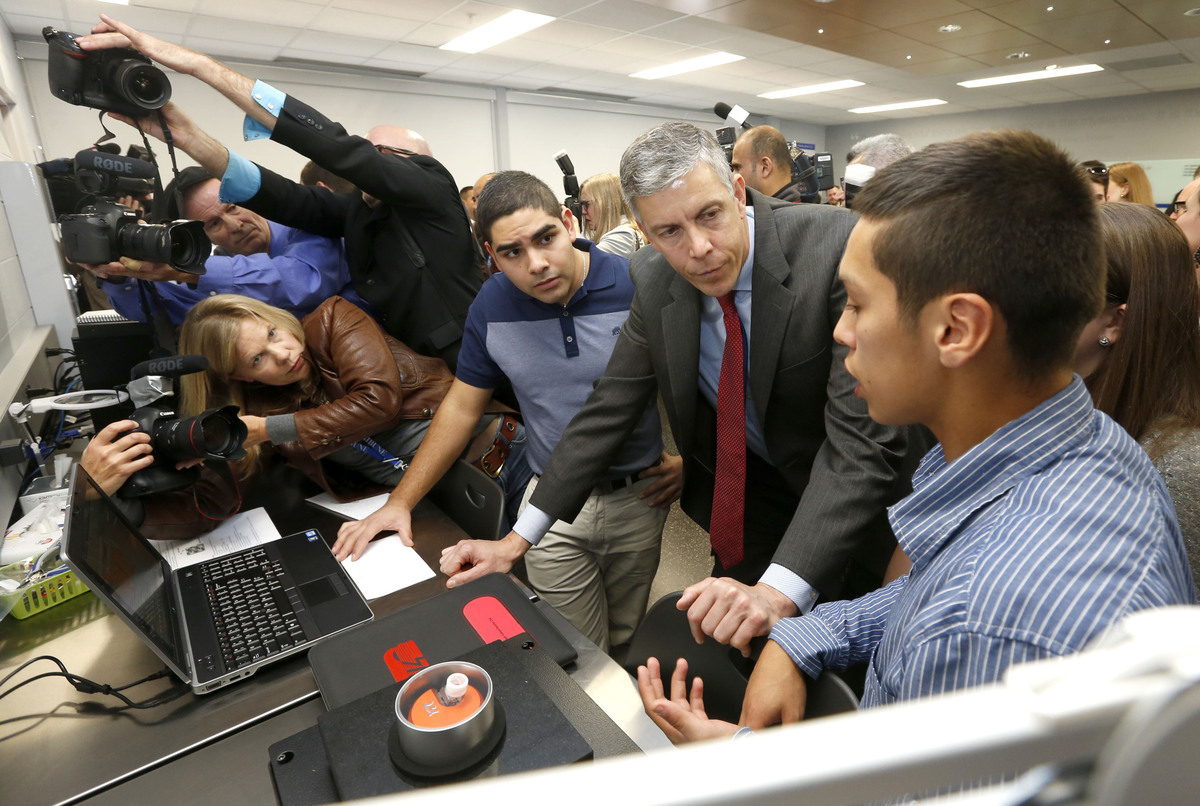 If Americans know Education Secretary Arne Duncan for anything at this point, it would be as that guy who claimed last week that opposition to the Common Core national K-12 educational standards sprang from "white suburban moms" who feared that tougher requirements would reveal their children to be as not "brilliant" as they thought.

He has since expressed regret for the comment made at a conference of state school officials. But it's unlikely to soon be forgotten. It's likely to linger, as did his boss's unfortunate characterization of small-town Pennsylvanians as people who "cling to their guns or religion" for reassurance in an uncertain world.

Where Duncan finds himself now is a far cry from where he was when he rode into town with Obama in 2009. During his confirmation hearing in early 2009, Sen. Lamar Alexander, R-Tenn., a former education secretary himself, lauded Duncan as Obama's best Cabinet pick.

And it's a good distance from where he was early in Obama's first term when he was able to dole out federal money from the economic stimulus to states as encouragement for them to move more aggressively to raise the educational performance of their students.

But since then the political winds have shifted greatly. The administration has found itself in a grind-it-out fight with Republicans who accuse him of trying to impose big government on Americans.

That has been the argument behind the opposition to the Affordable Care Act. And it is the same argument some critics have made about the Common Core.

In fact, some Common Core critics on the political right, including those affiliated with the Tea Party, have warned of a federal takeover of education, echoing the health care battle. They disdainfully call the national educational initiative "Obamacore" despite the fact that the educational standards actually originated in the states.

With the administration already on its heels over the botched rollout of HealthCare.gov and the president's broken promise about people being able to keep health plans, the last thing Obama needed was for Duncan to create more political headaches for the administration.

"Early on he was regarded as the shining bipartisan success story in the Cabinet," said Frederick Hess, an education expert and blogger at the American Enterprise Institute. "He got a lot of accolades from both Republicans and Democrats."

It's partly the intense partisan atmosphere. But it's also because congressional Republicans view dimly some of Duncan's actions to loosen the grip of the law known as No Child Left Behind.

While some critics have called on him to resign or be fired — like a Facebook group called Moms Against Duncan — there's no indication Obama has any plans to get rid of a fellow Chicagoan who occasionally plays basketball with the president.

If Duncan is known for anything in education circles, it's for dispensing federal dollars as part of the administration's Race to the Top program to get states to come up with more robust ways to improve school performance and evaluate teachers. Getting states to implement the Common Core standards was part of his effort.

The Common Core standards were created to raise K-12 student achievement. It's partly about better preparing U.S. students for college and the work world and partly about making them more competitive with students in other advanced industrial nations who consistently outperform Americans.

Forty-five states and the District of Columbia have adopted the standards, which lay down what students should know by each grade. The emphasis is on critical thinking skills, not rote learning.

The standards emerged from work done by school administrators, teachers and education experts with governors and state education officials overseeing the overall effort.

Duncan fully embraced the standards and used federal dollars as incentives to get states to move swiftly to put them in practice.

Unfortunately, according to some experts, this just fueled the federal-takeover-of-education suspicions, with some bordering on conspiracy theories.

"His strategy around the Common Core in a lot of ways has to do with his undoing," said Maria Voles Ferguson, an Education Department official in the Clinton administration who now serves as executive director of the Center on Education Policy.

"Anyone who's worked in education understands there's always this huge sensitivity that the federal department is going to take over state and local school districts' rights to govern their schools. We saw this in the Clinton administration, too, which was sort of the first push for standards," said Ferguson.

"So being aware of that you would think that he would have been more clever about [the way] he managed the relationship between the department and the Common Core. Incentivizing it through Race to the Top was clearly not a good thing to do."

Parceling out those federal dollars helped make Duncan very popular early on. And he gained yet more favor with state and local education officials by granting states numerous waivers from compliance with No Child Left Behind.

The waivers prevented states from having to rate thousands of their schools as failing to meet annual progress goals under what many education experts view as NCLB's unrealistic, cookie-cutter standards.

But Duncan eventually ran out of the 2009 economic stimulus money that funded Race To The Top. And the waivers became a sore point with many in Congress and beyond; he was accused of using them to circumvent Congress and muck around in educational matters best left to states and localities.

Add to this doubts about Duncan's emphasis on high-stakes teacher evaluations and about the Common Core, concerns that range from practicalities of how to best implement the standards to superheated conspiracy theories, and you can see how the education secretary went from being popular to much less so.

That won't be a problem anymore — there's no money left for any more of those incentives. Which leads to a different problem, says Hess.

"He is now kind of on the hook for lots of stuff states promised to do or are starting to do, most famously Common Core, but he no longer has any resources to offer. And so what we've seen is him, particularly in 2013, in a series of speeches trying to invoke the bully pulpit. But in Texas, as they would say, it's 'All hat and no cattle'; 'cause there's no money to spend, he's having very limited influence.

"Many of the administration's preferred reforms, like teacher evaluation, school turnarounds, Common Core, are hitting pretty severe bumpy spots," Hess said. "And the more Duncan tries to tell folks that it's going to be OK and not to worry, the more he undermines the notion that this is all state-led and not federal. And, two, the more he seems to be dismissive of skepticism and concern, fueling the backlash."

Carmel Martin, executive vice president for policy at the liberal Center for American Progress, worked with Duncan as an assistant secretary of education. She defends the spirit of his controversial comment.

"As a white suburban mom, I appreciated what he was trying to convey, which is that the challenges of education in America are not just restricted to poor schools or poor school districts. That all parents need to know how their children are doing relative to what's going to be expected of them in the next phase of their lives.

"When you look at things like remediation rates at the college level, it's not just kids from disadvantaged backgrounds that are showing up in college without the skills to be successful. So as a policy person who used to work with him, I understood what he was trying to convey albeit, as he admitted, in a clumsy way."

While it's true the stimulus money is gone, Martin says there's still much the Education Department under Duncan can do, such as serving as a clearinghouse for the states to share "best practices" as they implement the Common Core standards.

Duncan's legacy is about more than financially rewarding states for acting to improve educational results. Rather, it's the way he used all the levers at his disposal to move education toward more accountability, at both the K-12 level and higher education.

Tennessee, for instance, recently showed a significant increase in its National Assessment of Educational Progress scores. State and local officials get much of the credit, of course.

"But Arne figured out how to provide a lot of tools to support what they were trying to do, everything from Race to the Top to smaller competitive grants and Teacher Incentive Fund" to a [No Child Left Behind] waiver, said Martin. "That's what he should be remembered for because he did that really, really well."