Accessibility links
'Nuclear Option' Vote Marks Tectonic Shift In Senate Rules : It's All Politics The real reason Senate Majority Leader Harry Reid changed the rules Thursday was the proliferation of the filibuster's use — and the near-total separation of the tactic from any real objections to the nominee being blocked. 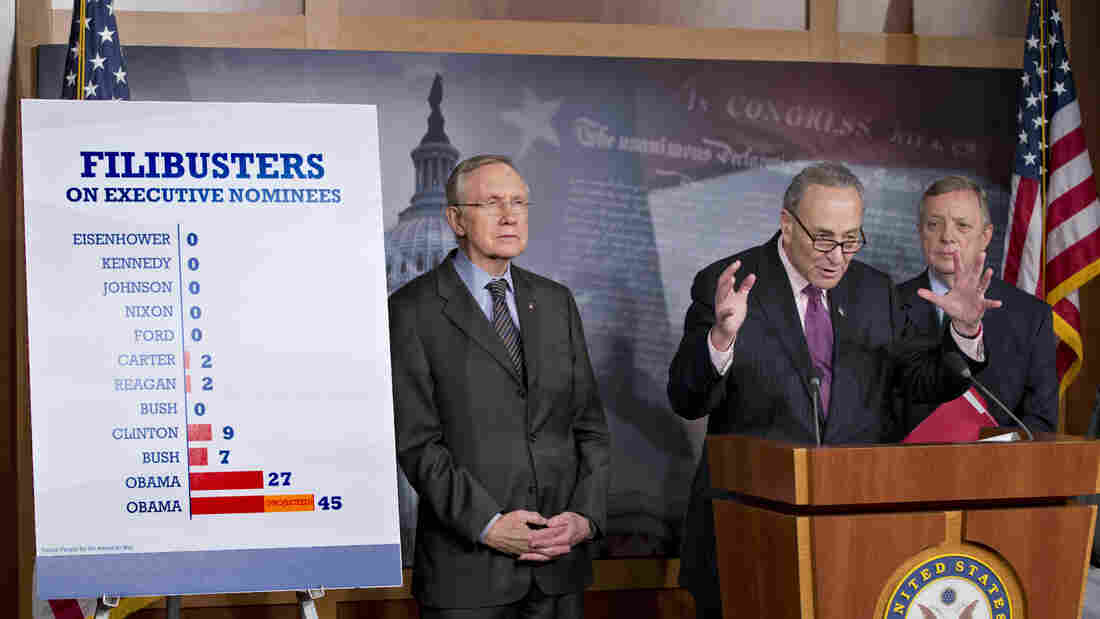 Senate Majority Leader Harry Reid's move Thursday to make possible the confirmation of presidential nominees with a simple majority marks a tectonic shift in the rules and folkways of the Senate.

Back in 2005, then-Senate Majority Leader Bill Frist called this idea "the constitutional option" when he came close to invoking it on behalf of the judicial nominees of President George W. Bush.

Guess which name stuck. The latter label was not only shorter for headline writers, it also had the crack of doom, invoking the ultimate form of warfare.

By either name, it was the same maneuver, and Lott and Frist were threatening to use it for the same reason. Restive Democrats, then in the Senate minority, were holding up Bush nominees they didn't like by invoking every senator's right to "extended debate."

That legal nicety has a more familiar name, too: filibuster.

Nowadays, senators rarely take the floor for extended speeches intended to talk a particular bill or nomination to death. They merely threaten to do so. (Freshman Rand Paul of Kentucky did mount a "live filibuster" earlier this year, achieving little but gaining a lot of media attention.)

But even the threat can be — and usually is — as effective as an actual filibuster. It takes 60 votes to squelch such a threat, and when the majority party has just 55 votes, that higher total is a tall order indeed.

This was far from a new idea in Lott and Frist's era. Vice President Richard Nixon had been tasked with writing a legal brief on behalf of the idea back in the 1950s, when minority Democrats were bedeviling some of President Dwight Eisenhower's judicial choices.

First off, it didn't happen in 2005 because a group of relatively centrist senators got together to prevent it from happening. Seven Republicans and seven Democrats formed what was called the Gang of 14, saying they would oppose the use of the filibuster for any but the most egregiously offensive nominees to the federal bench. The crisis receded.

Since then, however, the use of the filibuster threat to stall judicial nominations (and other executive nominations) has been vastly expanded. On the floor today, Reid said there had been as many instances of filibuster against nominees in the past 4 1/2 years (i.e., the Obama presidency) as in all prior American history.

Indeed, the filibuster in our time has become as much a Senate routine as the chaplain's morning prayer.

Calling the majority vote confirmation back in 2005, Frist had made the point that the Constitution requires the Senate to "advise and consent" in presidential appointments but does not specify a supermajority to do so. This stands in contrast to many other constitutional mandates, such as the two-thirds majority for ratifying treaties or constitutional amendments.

Borrowing from that Nixon legal brief, Frist drew the conclusion that the framers had not seen the confirmation of judges and others in the same category with those weightier matters for which it required a wider margin of support.

But no one should suppose that this legal interpretation has suddenly won total acceptance among legal scholars or sitting senators. The real reason Reid changed the rules today was the proliferation of the tactic's use and the near-total separation of it from any objections to the nominee being blocked.

In recent weeks, for example, Republican Lindsey Graham of South Carolina has said he plans to hold up all Obama nominees until he gets more answers about the fatal raid on a U.S. Consulate in Benghazi 14 months ago.

Meanwhile, vacancies remain at historic levels on the federal bench, and presidents now find it can take years just to complete a full set of Cabinet and sub-Cabinet positions.

Back in 2005, Democrats told Frist they would shut down all Senate operations if he exercised the nuclear option. Thanks to the Gang of 14, that confrontation never took place.

Will the Republicans now make good on the Democrats' old threat? Or will they seek other ways to slow the flow of Obama appointees to the federal bench and other posts?

It is most likely they will explore the latter tactics first, while reserving the right to launch a retaliatory strike of their own.