Accessibility links
Filibuster Vote Marks Escalation In D.C.'s Partisan Wars : It's All Politics By changing the Senate rules to require a simple majority instead of a supermajority for most nominations, Democrats acted on a threat each party has aimed at the other for nearly a decade. 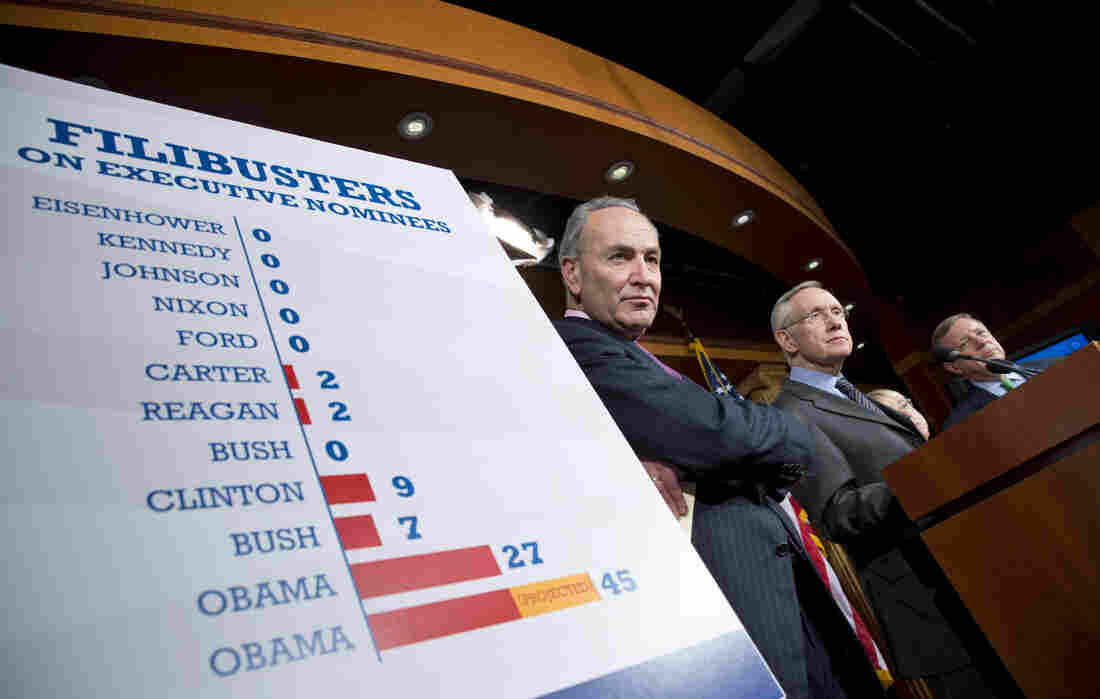 You thought things were bad in the Senate before? Well, they might have just gotten worse after Thursday's vote by Democrats to significantly defang the filibuster on presidential nominations — the so-called nuclear option.

Senate Democrats took the historic step of voting to diminish the minority's power to stall most presidential nominations. By changing the Senate rules to require a simple majority instead of a supermajority for most nominations to get the green light for a full floor vote, Democrats acted on a threat each party has aimed at the other for nearly a decade.

There was an element of the dog that caught the car in the whole affair. Now that it actually happened, neither Democrats or Republicans knew exactly what would happen next.

But it was safe to say it represented an escalation in the partisan wars dating back to the 1990s. And it threatened to make common ground even harder to find in an already badly divided government.

"It doesn't make for a very healthy or helpful environment," said Sen. Rand Paul, R-Ky., as he left the Senate chamber Thursday, in what was a model of understatement.

"We have to wait and see what the reaction is and honestly I just don't know what the reaction will be," said Sen. Michael Crapo, R-Idaho. "It's very possible that things will be slowed down. But I don't think major issues like the budget agreement would be stopped."

The nuclear option as a threat flared up in 2005 when Republicans controlled the Senate and threatened to change the rules to stop Senate Democrats from blocking President George W. Bush's judicial nominee picks. [Some of us covered the big rallies conservatives held over the issue.]

But it never happened because bipartisan groups of senators who feared the institutional damage such a change could do always brokered last-minute deals to avert it. The last such agreement happened last summer after Republicans agreed to let the Senate vote on several of Obama's executive branch picks and Democrats agreed to leave the filibuster rules unchanged.

Senate Democrats reached their limit, however, after Republicans recently blocked three Obama appointments to the U.S. Appeals Court for the D.C. Circuit, commonly thought of as the nation's second most powerful court.

"The American people are sick of this. We're sick of it," said Sen. Harry Reid, the Senate majority leader. "Is it any wonder how people look at Congress? So as I said a little while ago, enough is enough."

Democrats also filibustered when they were in the minority. But what forced their drastic action now, they say, is the number of filibusters that have mushroomed during Obama's term, leaving important executive branch posts vacant and judicial nominees in limbo.

To Democrats, the cascade of GOP filibusters seemed an attempt to nullify the results of two national elections.

"For the last 4 1/2 years they have done everything they can to deny the fact that Obama was elected and then re-elected. As you know, the — during the last Congress, Republican leader McConnell said his No. 1 goal was to defeat Obama. It didn't work. Obama is president. He's been re-elected," said Reid.

While the fallout for the chamber was unclear, the politics of the move was more in focus. Republicans plan to link it to the Affordable Care Act any chance they get.

In a preview of likely 2014 lines of attack, Kentucky Republican Mitch McConnell, the Senate minority leader, accused Democrats of an abuse of power by ramming through the rules change with a party-line vote, just as they did with Obamacare.

Democrats were also trying to change the subject away from Obamacare's flaws, McConnell and other Republicans claimed.

"The solution to this problem is at the ballot box. We look forward to having a great election in 2014," McConnell said, words which had to send a chill down the spines of vulnerable Senate Democrats in red states.

But there was also the potential that Democrats dispirited by Obamacare's real and perceived troubles could be energized, too, by the Senate's action, giving them a boost in turning out their voters next November.

A key part of the Democratic base, organized labor, sounded an early rallying cry after the Senate rule change.

"We applaud the leadership of Senator Reid to uphold democracy by breaking through the gridlock in order to address the pressing needs of our country," said AFL-CIO President Richard Trumka in a statement. "Working people expect their leaders to maintain a functioning government that works for them and the labor movement will continue to hold those leaders accountable to do just that."