Accessibility links
Newtown Anniversary Marked By Gun Control Stalemate : It's All Politics On the surface, it may look like the gun lobby ultimately won the political battles that mattered in the past year. After all, Congress failed to pass tougher gun laws. But the reality is more mixed; the result was more of a standoff. 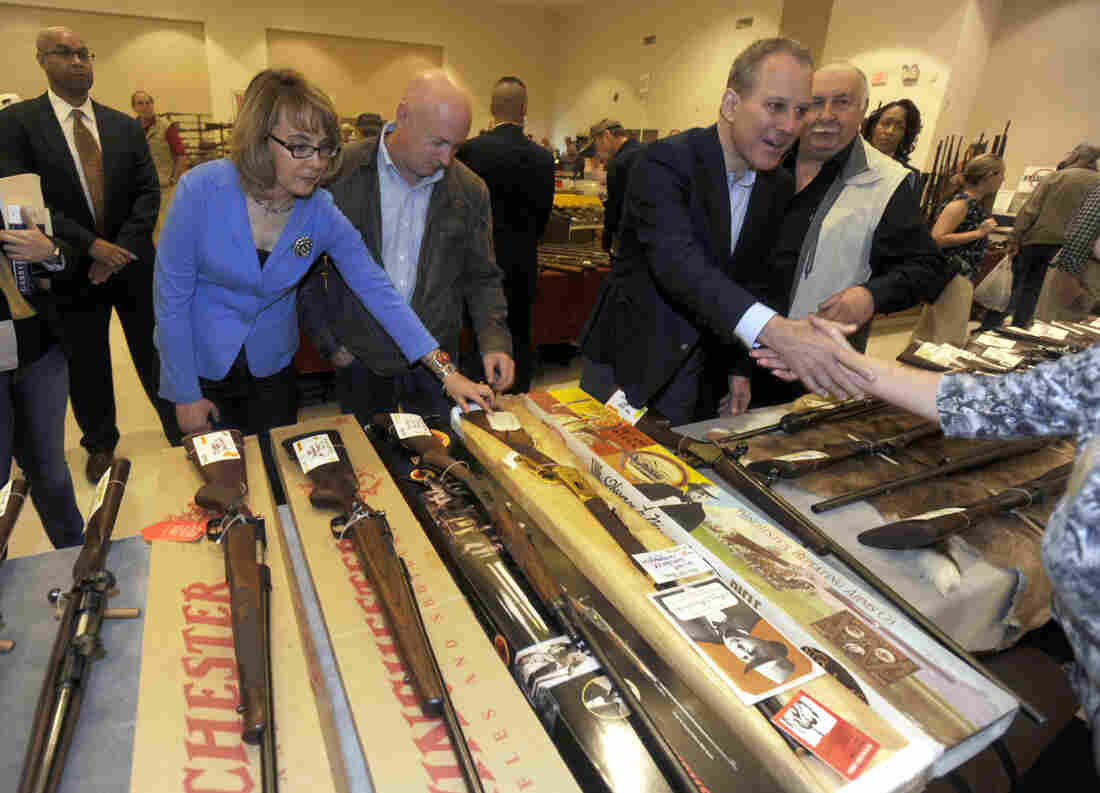 Former Rep. Gabby Giffords and her husband, Mark Kelly, at a gun show in Saratoga Springs, N.Y., in October. Giffords was shot in the head in a 2011 mass shooting in Tucson. She and Kelly have since founded a political action committee to push for tougher gun laws. Tim Roske/AP hide caption 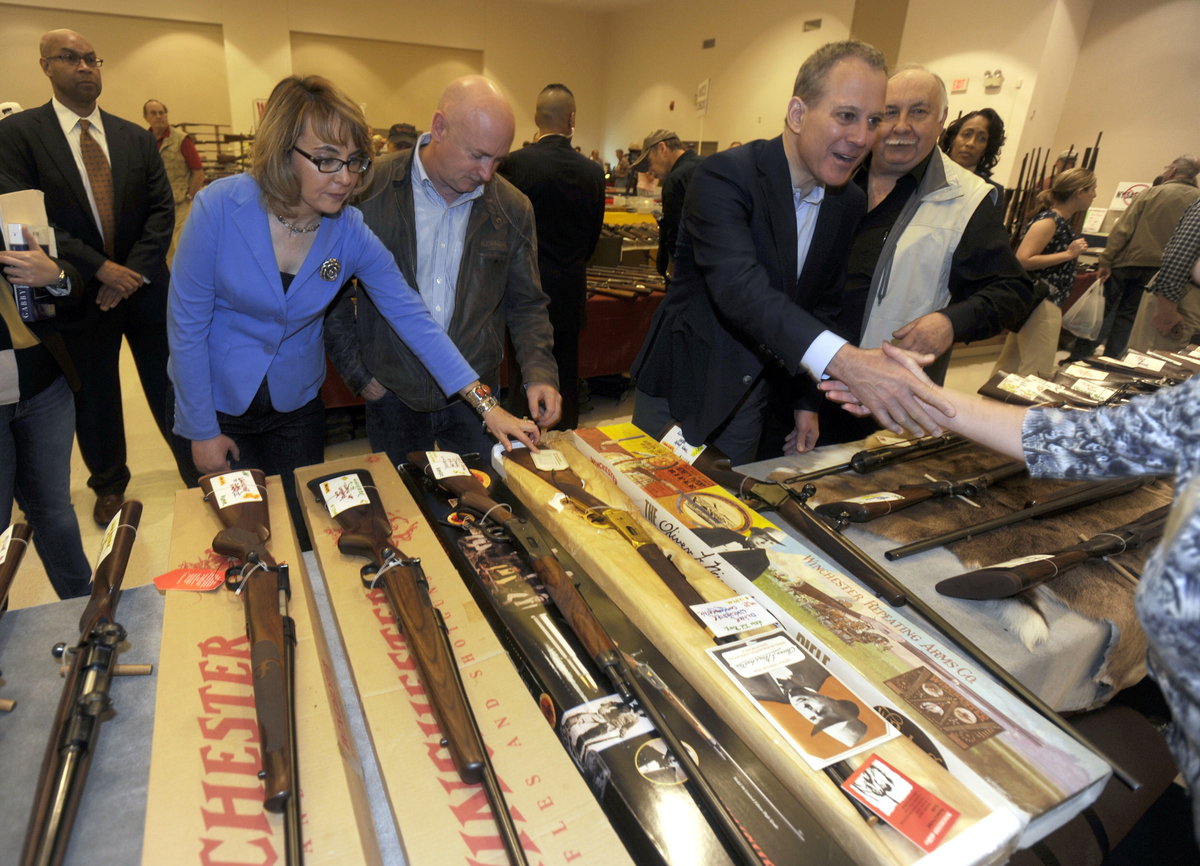 Former Rep. Gabby Giffords and her husband, Mark Kelly, at a gun show in Saratoga Springs, N.Y., in October. Giffords was shot in the head in a 2011 mass shooting in Tucson. She and Kelly have since founded a political action committee to push for tougher gun laws.

In the wrenching days and weeks after the Sandy Hook Elementary School tragedy, many on both sides of the gun control debate thought that horror had so shifted the political winds that stricter federal gun laws would surely result.

That, of course, didn't happen.

On the surface, it may look like the gun lobby ultimately won the political battles that mattered in the past year. After all, Congress failed to pass tougher gun laws. But the reality is more mixed; the result was more of a stalemate.

"I think it was a little bit like Verdun," the World War I battle, says Robert Spitzer, a SUNY Cortland professor and author of The Politics of Gun Control. "Deep trenches. Lots of fury. If you examine the front lines closely, you'll see advances in some places and retreats in other places. But overall, the line is pretty much what it was a year ago."

The trench warfare analogy is apt. The Sunlight Foundation reported that gun control groups in 2013 spent $1.6 million on lobbying. While not a large amount by Washington standards, it was five times what they spent in 2012. The gun lobby far outpaced them, however, spending at least $6.2 million on lobbying, the government transparency group reported.

And the result was stasis, at least on the federal level.

Gun advocates held the line in April with the Senate's failure to pass bipartisan legislation from Sens. Joe Manchin, D-W.Va., and Pat Toomey, R-Pa., that would have expanded background checks.

"It wasn't a slam dunk going in," says Larry Pratt, Gun Owners of America's executive director, of his side's success in killing the legislation. He and other gun lobbyists had first feared the Newtown shootings might give the gun control side enough traction to overcome opposition to stricter laws.

"But we were able to light enough fires that the heat registered," Pratt says. "And I think going into an election year, it would be surprising if somebody made a hard push to try to get a gun issue before the Congress."

People on both sides of the debate generally share Pratt's view that new federal gun control legislation is unlikely during a midterm election year.

Gun control experts note that Congress has been generally unproductive in terms of passing major legislation of any kind. The background-check legislation, in that regard, was no different than immigration or the farm bill.

But supporters of stricter laws point to legislative successes in the states and increased activism — both signs, they say, that the tragedy did change the political environment.

"I've been doing this stuff for something like 24 years. I understand the politics very well, and I understand why gun legislation is very difficult politically," says Daniel Webster, director of the Center for Gun Policy and Research at Johns Hopkins University.

"But I do think we are in a very different place than we were the day before Sandy Hook occurred," he says. "There's far more grass-roots energy to strengthen gun laws than there was before. You have the development of organizations like Moms Demand Action, the Sandy Hook Promise. You had the [political action committee] organization Gabrielle Giffords and Mark Kelly formed, Americans for Responsible Solutions. All of that happened this past year. There's also been a lot of activism by faith-based groups. And I don't think those people are going to go away."

Political barriers to federal gun legislation have led some new groups to resort to the time-tested tactic of economic pressure to effect change. For instance, Moms Demand Action has pressured Starbucks and Staples to make their retail locations gun-free zones. The Campaign to Unload is trying to get investors to sell their stock in gun makers.

And eight states enacted major gun-safety legislation, according to the Law Center to Prevent Gun Violence.

New York, Connecticut, Colorado and Delaware all passed new laws making background checks mandatory for all gun purchases, not just those at licensed dealers, thus closing the so-called gun-show loophole in those states.

Spitzer thinks it's unlikely there will be more action in the states in 2014. "I think we've probably seen a crest tide of gun measures in 2013," he says. "There are likely to be far fewer measures in 2014, partly because in states like New York and Colorado and Connecticut, they've done what they wanted to do.

"Secondly, I think both Republicans and Democrats, by and large, would rather the gun issue would go away, especially in 2014," he says. "For the Democrats, there's the major hassle factor as was illustrated by the two races in Colorado. For the Republicans, they don't want to be tarred as extremist gun nuts. Neither party really wants to latch on to this issue."