Accessibility links
Obama's Year Of Disappointing The Liberal Base : It's All Politics President Obama frustrated and angered many of his supporters this year, from his policies on drones and spying to his muddled message on whether to authorize airstrikes in war-torn Syria. He will end the year with sagging approval ratings.

Obama's Year Of Disappointing The Liberal Base

Obama's Year Of Disappointing The Liberal Base 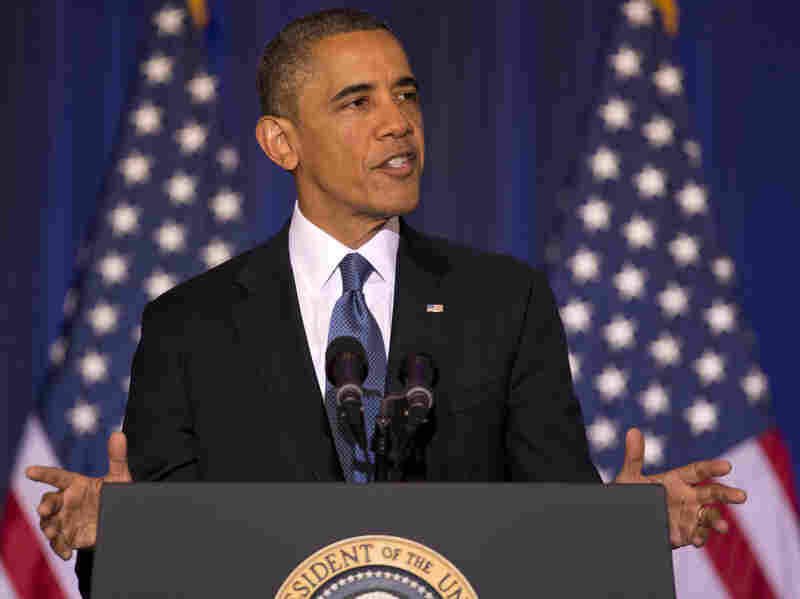 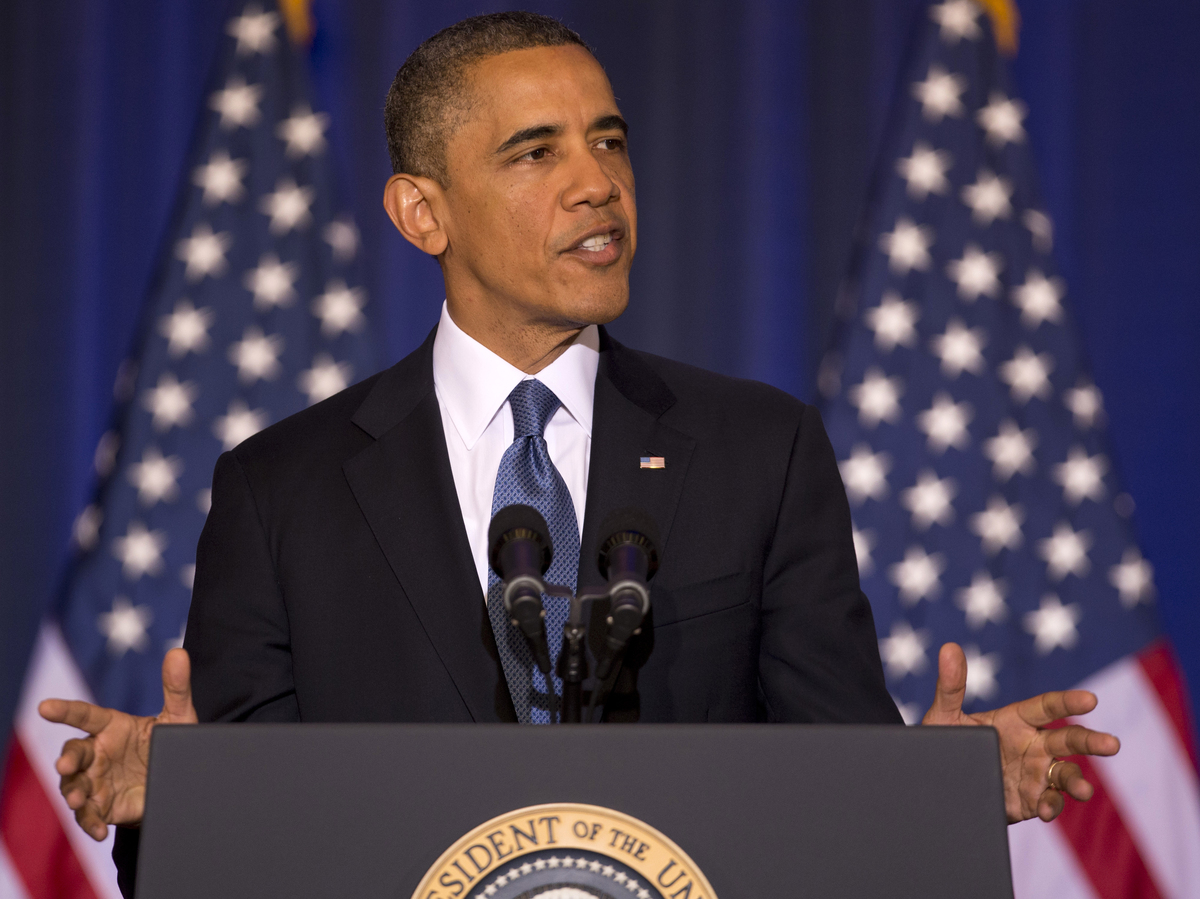 President Obama talks about drones and national security earlier this year at the National Defense University in Washington.

It's been a long, disappointing year for many of President Obama's most ardent supporters.

From drones and Syria to immigration and the Keystone XL pipeline, the list of issues on which the president has induced frustration and disillusionment is not a short one.

And fallout from that restive base is reflected in Obama's dismal year-end poll numbers.

His approval rating has sunk to a low point, trust in his ability to do the job has eroded, and, as a new Washington Post poll found, he has lost ground among "key members of his winning electoral coalition" — women, liberals and younger voters.

Granted, persuasive arguments can be made that the president faced nearly insurmountable odds in attempting to get his agenda passed in a cantankerous and deeply divided Congress. And for every infuriated supporter, there are many more on the conservative side with much bigger, louder gripes about the commander in chief.

Contributing mightily to the president's present poll predicament is the botched rollout of his signature health care law — that's a given. But let's take a year-end look at other ways the president has provoked his loyalists.

Pressured by his base to come clean on the use of drones for so-called targeted killing overseas, President Obama during a May speech at the National Defense University defended his administration's "heavily constrained" use of the remote aircraft to kill suspected terrorists. He acknowledged that their use "raises profound questions," including the extent of civilian casualties. At the time, Obama said he'd declassify information on a strike that killed an American citizen, al-Qaida leader Anwar al-Awlaki.

But his follow-up has been less than stellar, according to a recent assessment by the online investigative site ProPublica. Among its findings: The administration has not provided promised transparency about drone-related civilian deaths; it has not defined who can be targeted; and it has not provided a "precise legal rationale" for the strikes.

Here's what liberal Washington Post columnist Eugene Robinson wrote this month: "I believe historians will look at Obama's second term and see the implementation of the Affordable Care Act, despite its rocky launch, as a great moral triumph. I fear they will see the drone war as a great moral failure."

The administration was knocked on its heels when National Security Agency leaker Edward Snowden revealed this year the reach and depth of the government's blanket electronic surveillance of American citizens. That was followed by revelations that the NSA was also snooping in electronically on dozens of foreign leaders, including German Chancellor Angela Merkel. The New York Times argued that Obama had lost credibility on the issue, and the U.S. technology industry has been furiously working on ways to prevent the government from mining its users' data.

Obama's assertion that he was unaware that the NSA was spying on Merkel and other allies may be true, but didn't reassure his base. By November, writing on the liberal Daily Kos website, Laurence Lewis wrote that to reclaim credibility on the NSA/spying scandal, Obama should fire NSA director Gen. Keith Alexander and National Intelligence Director James Clapper. Wrote Lewis: "Failure to do so will continue to call into question what the president and the White House truly intend, and of even more critical importance, who is really in charge."

This week, a U.S. court weighed in with a decision that excoriated the NSA's collection of Americans' phone calls as "almost Orwellian," and an infringement on Fourth Amendment protections from unreasonable searches and seizures.

Liberals were initially divided on Obama's plan to intervene in civil-war-torn Syria, but they all wanted more answers. The Congressional Progressive Caucus sent the president a list of 67 questions they wanted him to answer, from defining how Syria's use of chemical weapons threatened U.S. national security to the role of the United Nations Security Council in authorizing force. Obama's announced intent to seek congressional authorization for airstrikes inflamed liberals like Noam Schreiber ("Obama has resorted to non-Syria arguments for intervening in Syria because he can't justify an intervention on its own terms") to Michael Cohen ("If anything, the fact that Obama was forced to rely on contradictory and deceptive arguments to sell the American people on the idea of military intervention in Syria did more to undermine the case for intervention than reinforce it.")

The backlash led to a presidential step-back. He ultimately announced he'd pursue a diplomatic solution — one that analysts largely agree is now in shambles.

Environmentalists argue that building the 1,200-mile pipeline from Alberta, Canada, to Nebraska and on to the Gulf Coast, where oil would be refined, would hobble efforts to battle climate change. The pipeline would carry tar sands oil, and the leaders of 350.org, a global group that works on climate change issues, has pressed Obama to rule against the pipeline project. They argue that it promotes dirty energy and would ultimately lead to climate-damaging emissions.

Obama has yet to determine whether he'll grant a federal permit for the $7 billion pipeline project. In a June speech on climate change, here's what he said:

"Now, I know there's been, for example, a lot of controversy surrounding the proposal to build a pipeline, the Keystone pipeline, that would carry oil from Canadian tar sands down to refineries in the Gulf. And the State Department is going through the final stages of evaluating the proposal. That's how it's always been done. But I do want to be clear: Allowing the Keystone pipeline to be built requires a finding that doing so would be in our nation's interest. And our national interest will be served only if this project does not significantly exacerbate the problem of carbon pollution. The net effects of the pipeline's impact on our climate will be absolutely critical to determining whether this project is allowed to go forward. It's relevant."

Here's a prediction from Carol Browner, Obama's former chief climate change adviser, in a recent interview with the Los Angeles Times: "I think at the end of the day he will say no, but there will be some twists and turns before we get there."

Finally, a quick rundown on key legislative initiatives supported by his liberal base that the president has failed to advance in 2013, victims largely of political reality and diminished White House capital: gun control, immigration reform and a bump in the minimum wage.