Accessibility links
Gun Control Lobby Takes Note Of Opposition's Success : It's All Politics Momentum to pass tighter gun laws surged after the shootings in Newtown, Conn., a year ago. But a provision to expand background checks failed in the Senate. In that loss, gun control activists say they learned some important lessons from those who lobbied against them. 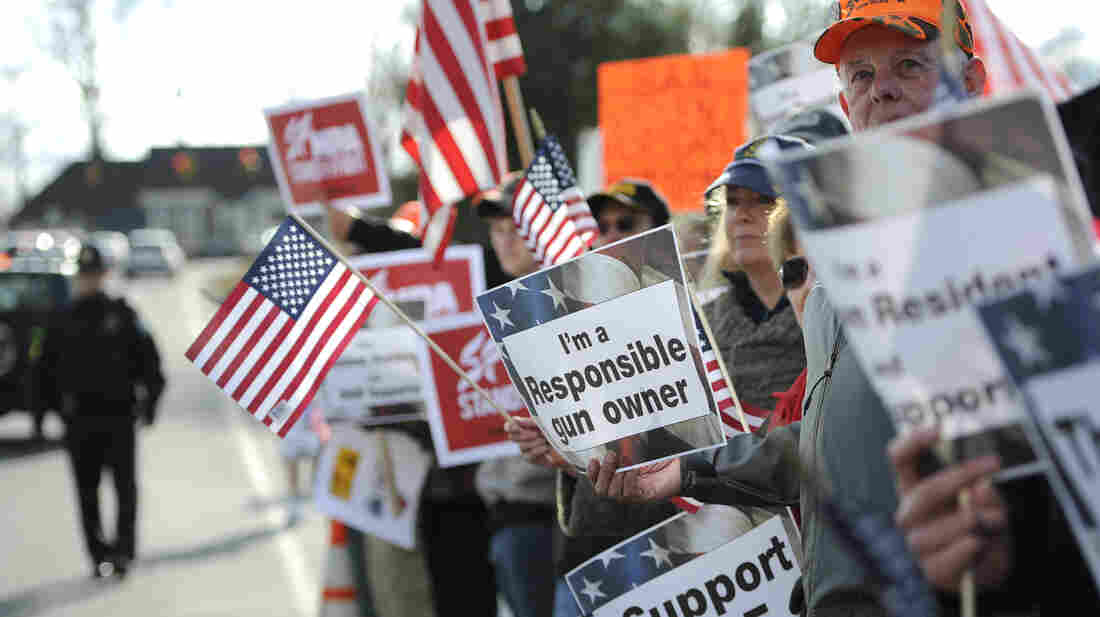 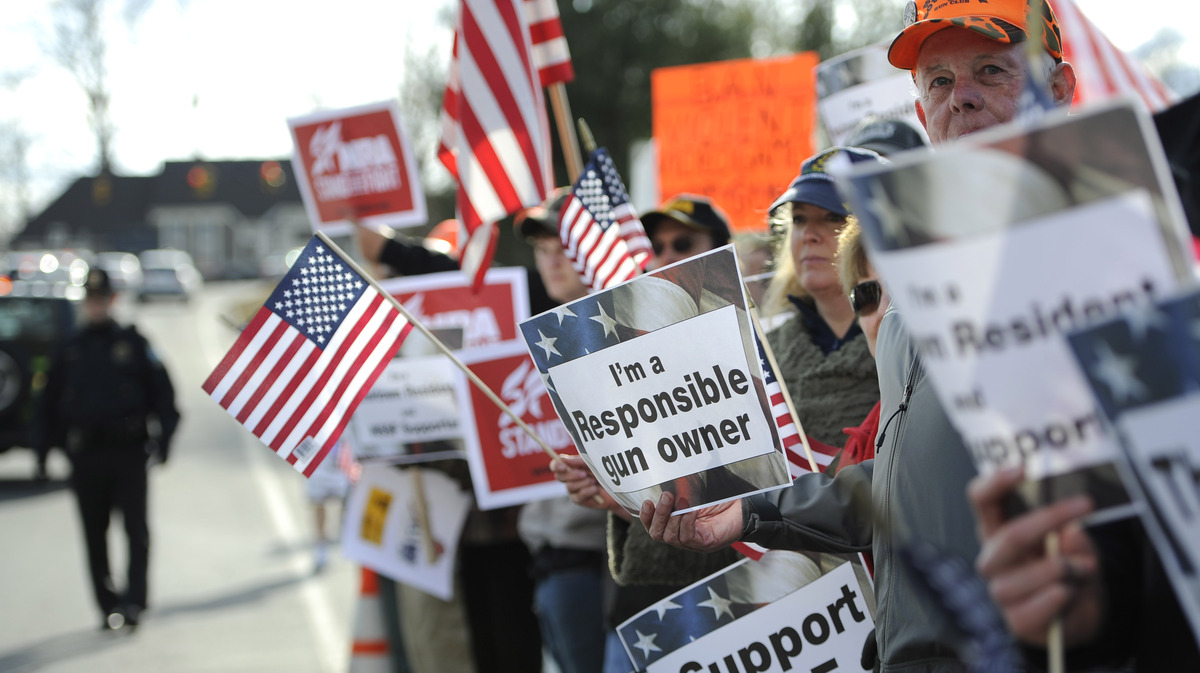 For gun control advocates hoping to see federal gun laws tighten after the shootings in Newtown, Conn., 2013 was a disheartening year. A narrow provision to expand background checks failed in the Senate.

For gun rights activists, the death of that legislation proved once more their single-issue intensity and decades-long grass-roots organizing were enough to prevail. Those are also valuable lessons for their opponents.

A 'Voice' For Lost Children

It may have been the year gun control legislation collapsed in the Senate, but Shundra Robinson is grateful for 2013. It's the year she decided to jump into gun control advocacy, which became a way to speak for the son she lost three years ago. 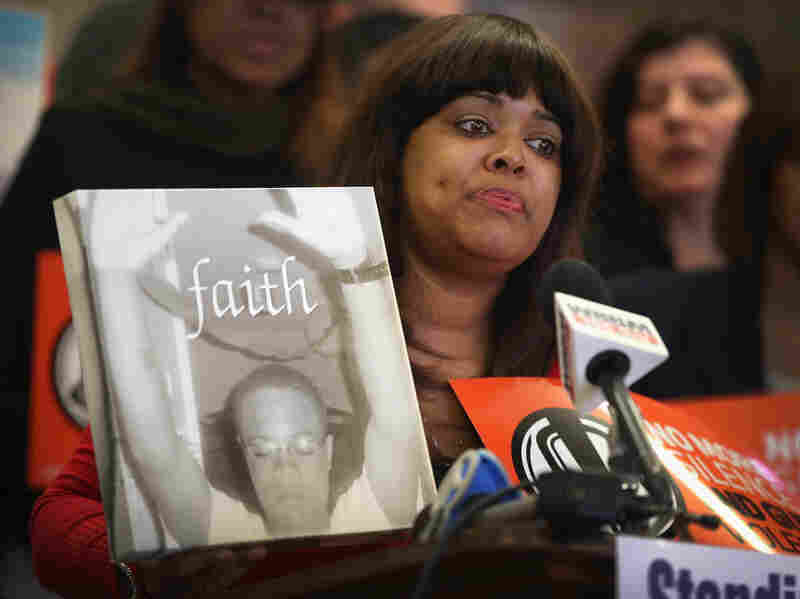 Shundra Robinson holds a picture of her son, a victim of gun violence, at a gathering in Chicago on the anniversary of the shootings at Sandy Hook Elementary in Connecticut. Scott Olson/Getty Images hide caption 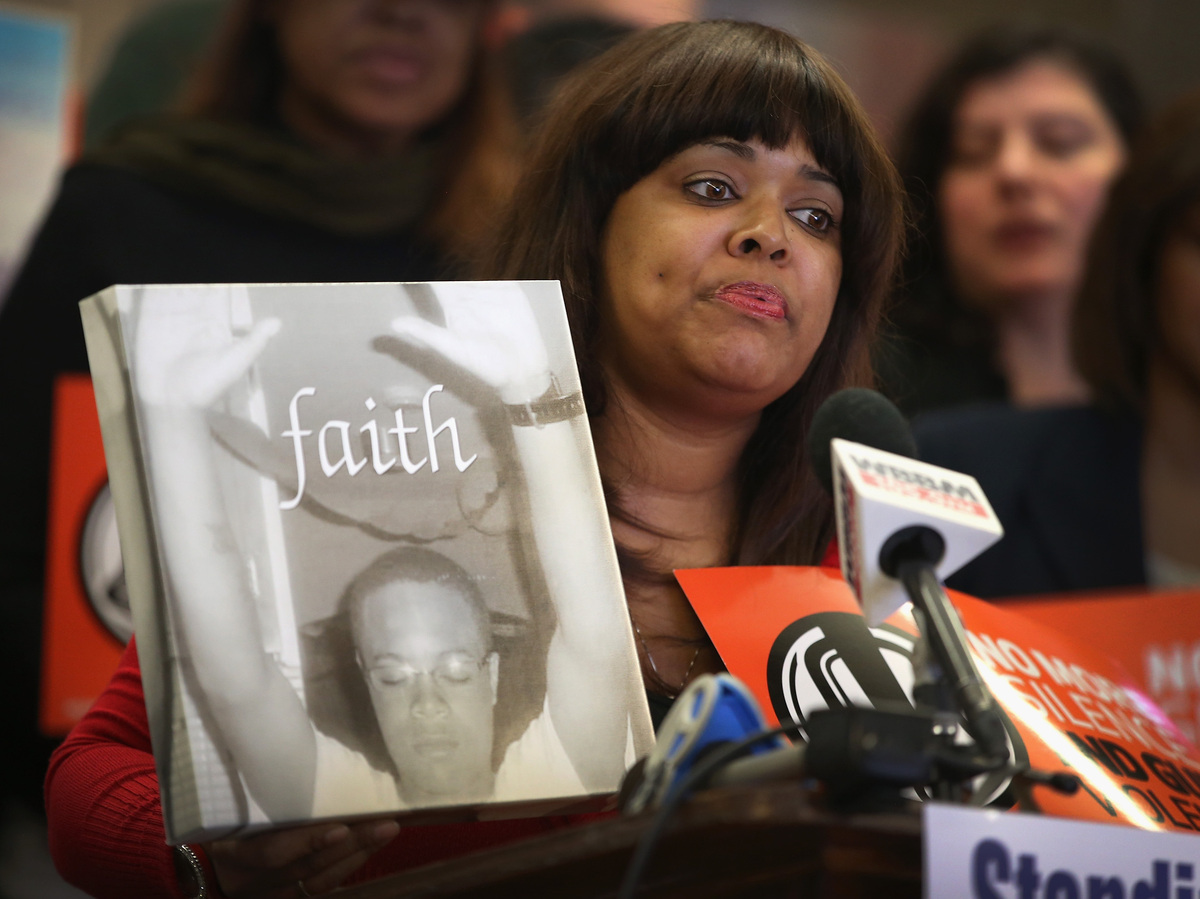 Shundra Robinson holds a picture of her son, a victim of gun violence, at a gathering in Chicago on the anniversary of the shootings at Sandy Hook Elementary in Connecticut.

"I feel like he still has a voice," says Robinson. "Even though he's no longer here in the physical, he's still speaking."

Her son, Deno Wooldridge, was gunned down on his grandmother's porch in Chicago by a group of unidentified men when he was 18. Robinson says it took the massacre of 20 schoolchildren more than 800 miles away for people to absorb what happened to her son, and to see gun-ravaged Chicago with fresh eyes.

At first, Robinson wished the world had reacted with the same outrage when Deno was killed.

"But guess what: Another part of me was like, 'Well, thank God that finally they're seeing that it's a problem,' " she says, "and so I consider my son being connected. So the Newtown babies are all of our babies. To me, every child that's murdered I consider mine."

And many residents in Newtown felt the same.

Newtown Action Alliance reached out to Robinson and other Chicago parents touched by tragedy, asking them to join its fight for stricter gun control laws.

These small bonds among strangers multiplied across cities all over the country. They helped 2013 see a record surge in grass-roots organizing among gun control advocates, and more political money than ever to tighten gun laws.

But they met defeat on Capitol Hill in April, when a provision to extend background checks to gun shows and online sales died in the Senate — even as polls showed 90 percent of Americans favored expanding background checks.

"The gun lobby and its allies willfully lied about the bill," President Obama said in a speech the day the legislation failed. "They claimed that it would create some sort of Big Brother gun registry, even though the bill did the opposite. This legislation in fact outlawed any registry."

As angry as gun control advocates were, they learned a few lessons from the gun rights organizers. One of them was about money. The Sunlight Foundation, a government watchdog group, reported that the gun lobby outspent the gun control lobby this year by a factor of seven.

That's a regret for Mark Glaze, executive director of Mayors Against Illegal Guns.

"We now know the NRA poured millions of dollars into persuading people to call their senators and tell them to stop any kind of progress. And the truth is, that was effective," says Glaze. "You know, there were more phone calls in some offices on their side than on ours, and that makes a difference — as it should. We would do that differently."

Lessons From The Opposition

Mayors Against Illegal Guns theoretically has the resources to spend. Its founder is billionaire and outgoing New York City Mayor Michael Bloomberg. And in Bloomberg, the National Rifle Association has for the first time a counterweight with vast resources.

But 2013 also reminded everyone that sometimes money can't substitute for good old-fashioned grass-roots organizing. The NRA coordinated its base well in 2013, Glaze points out.

"NRA has owned this issue for a generation. They've had the only political operation," he says. "They have the grass-roots strength, and we simply weren't there yet. But we're getting there."

After Fight Over Colo. Gun Laws, Two Sides As Dug In As Ever

Gun Owners of America, another gun rights organization, also showed the power of mobilization. The group doesn't have the cash or the membership the NRA does, but its no-compromise stance keeps pressure on the NRA. Back in April, Gun Owners of America showed with one email alert that it could help flood the phone lines on Capitol Hill days before the Senate vote.

"We thank God and we thank our wonderful members, and between the two of those, we have no power that doesn't come from them," says Michael Hammond, the group's legislative counsel.

He adds, "I think most of our people understood that [the bill] was exploiting a tragedy for a solution which didn't address the tragedy in any way, and that it was intended to be nothing but a stair step to the next, even more onerous demand for gun control."

Senate leaders are promising to bring up background-checks legislation again. But one of the bill's authors — Democrat Joe Manchin of West Virginia — says that vote isn't happening anytime soon.

"You know, there's no use to just push. I mean, I'm not pushing a vote for the sake of just taking a political vote. If we're going to take a vote, I want to make sure we have the numbers to pass it," he says.

And right now, Manchin says, he just doesn't have them.