Accessibility links
How Media Outlets Sometimes Agree To Agree : It's All Politics Certain issues brook no dissent. But how do media outlets decide if and when a strong enough consensus has emerged to safely dismiss other viewpoints? 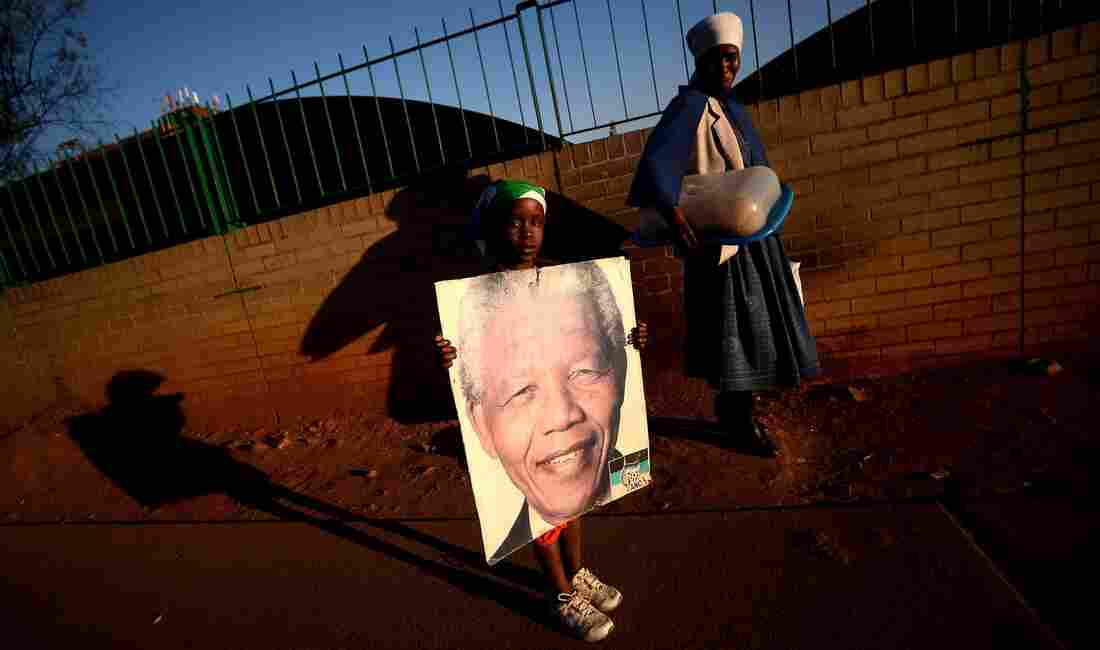 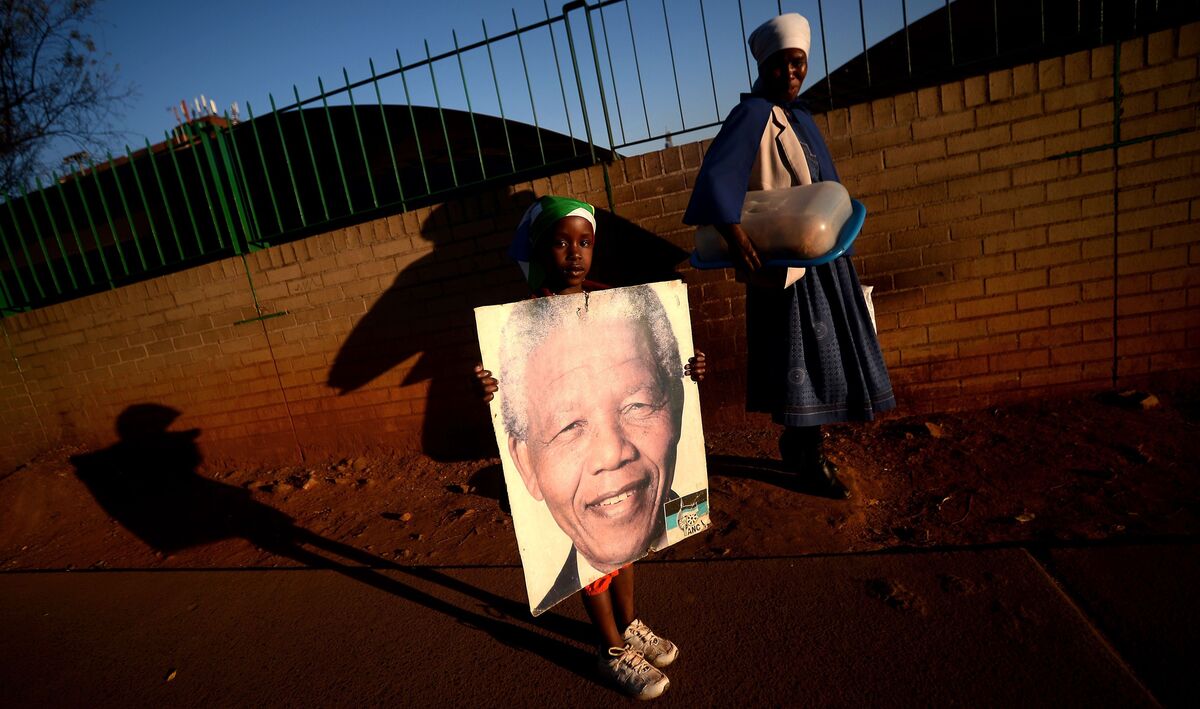 When former South African President Nelson Mandela died last month, he was celebrated around the world, lauded in this country by politicians who range as far apart on the ideological spectrum as President Obama and Texas GOP Sen. Ted Cruz.

It was easy to forget how controversial a figure Mandela once had been. People who referred to him in death as a communist or terrorist, or refused to pay him proper homage, were derided as marginal figures.

By the time of his death, Mandela's greatness had become one of those rare topics about which media outlets felt no need to reflect any sort of dissenting opinion.

"There's an area of issues in society that we recognize in some way doesn't need diversity," says Stephen Ward, a professor of journalism ethics at the University of Oregon. "We can be one-sided, in a way."

Some subjects that invite no debate — like the world being round, or the evils of child molestation — seem like timeless truths. But many of them, such as Mandela's storied role in changing South African society or the cause of civil rights in this country, had once been among the most contentious issues of the day.

As topics move from being controversial to receiving consensus approval, that raises a question about the nature of those judgments: do media outlets drive that shift, or merely reflect it?

The 50th anniversary of the March on Washington last August was treated as a civic holiday, with three presidents in attendance and the issuance of a commemorative postage stamp. No reputable news outlet felt any need to quote someone holding a pro-segregationist point of view.

The original March on Washington, at which Martin Luther King delivered his famous "I Have a Dream" speech, was a bit different.

"That sense that something remarkable had just happened was not shared everywhere," Gene Roberts and Hank Klibanoff write in The Race Beat: The Press, the Civil Rights Struggle and the Awakening of a Nation. "The Clarion-Ledger in Jackson put on its cover a photograph showing the litter left behind and the headline 'Washington Is Clean Again With Negro Trash Removed.'"

Once federal laws were enacted protecting the rights of African-Americans to vote and prohibiting discrimination in public accommodations, politicians who had fervently opposed such changes essentially gave up.

After they stopped talking about the need for segregation, media outlets stopped treating that viewpoint as legitimate.

"Those who were fighting an emerging consensus decide it's no longer politically worthwhile to do so," says Daniel Hallin, a communication professor at the University of California, San Diego. "At that point, journalists no longer feel there's a dispute to cover."

That's what often happens, Hallin says. Journalists reflect the balance of opinion among political elites, which in some cases shifts over time toward consensus.

"Journalists do key on how the balance of political forces is seen," he says. "If it looks like a battle is lost, it's usually treated as lost. It's different than treating it as a live battle."

Journalists do have a bias toward conflict — but do they have perfect timing? Can they catch the exact moment whena society agrees that conflicting points of view no longer merit discussion?

Supporters of same-sex marriage are convinced their position will eventually look like that of civil rights supporters in the 1960s, something history will judge to have been incontrovertibly right. The San Francisco Chronicle seems to believe that moment has already arrived.

When the Supreme Court issued twin rulings in favor of gay marriage last June, the Chronicle ran a banner headline on its front page trumpeting "Double Victory," kicking off a large package of celebratory coverage.

Remember, one of the court cases threw out a California ban on gay marriage that had been approved by state voters just five years earlier. Nevertheless, Audrey Cooper, the managing editor of the Chronicle, says her paper's coverage was "perfectly appropriate."

She says on some issues, being "right" occasionally means being in the vanguard of change.

The Problem With Science

Even if gay marriage supporters do have history on their side, they're not there yet. Opinion has been moving in favor of same-sex marriage rights, but only a slim majority of Americans favor gay marriage at this point.

At any rate, tides can turn. Issues on which there was once no real disagreement can rise up to become matters worth fighting about.

That has happened already with same-sex marriage — supporters of which were mocked as fringe figures just a couple of decades ago.

And it can happen with matters on which there seems to be no room for debate. Namely, scientific theories.

The whole point of science is that ideas can be tested and verified independently. Yet that doesn't mean they'll maintain a political consensus.

Fewer Americans accept that human activity is linked to climate change than was the case a decade ago, even as the science becomes ever more certain. And a poll released Monday by the Pew Research Center showed that belief in evolution has dropped substantially since 2009 among Republicans.

Ward, the Oregon professor, says what's important for journalists is to reflect "an appropriate diversity of voices."

If enough Americans believe something, they can't be dismissed as fringe elements. "The idea in political situations that there's one truth just beggars belief," he says.

Yet when it comes to science, Ward says media outlets need to distinguish between public opinion polls and the scientific consensus. Falsely "balanced" stories — regarding vaccine safety, for example — can cause real harm.

Some outlets state bluntly there is a need for them to exercise judgment. And certainly it's often proved worthwhile for journalists to remain skeptical when everyone else seems to have agreed on the "truth" about a matter.

"Saying 'there's no sign humans have caused climate change' is not stating an opinion, it's asserting a factual inaccuracy," writes Paul Thornton, the letters editor for the Los Angeles Times, defending the paper's policy to deny climate-change deniers a forum.

But that doesn't mean people won't write letters, or complain when the paper won't run them. On all sorts of issues, there are interest groups and ordinary citizens who adhere strongly to viewpoints that society at large seems to have dismissed.

In the age of Twitter, their voices can be loud.

"On a lot of things, it's much harder to achieve consensus, partly because you have partisan media which are often actively working to keep controversies alive that might otherwise die," says Hallin, the UCSD communication professor.