Accessibility links
Partisan Evolution Gap? Politically Insignificant, GOP Says : It's All Politics A new Pew survey showing that belief in evolution has dropped among Republicans is fueling critics who argue the GOP is anti-science. But Republican strategists say it's not an issue that will matter at the polls. 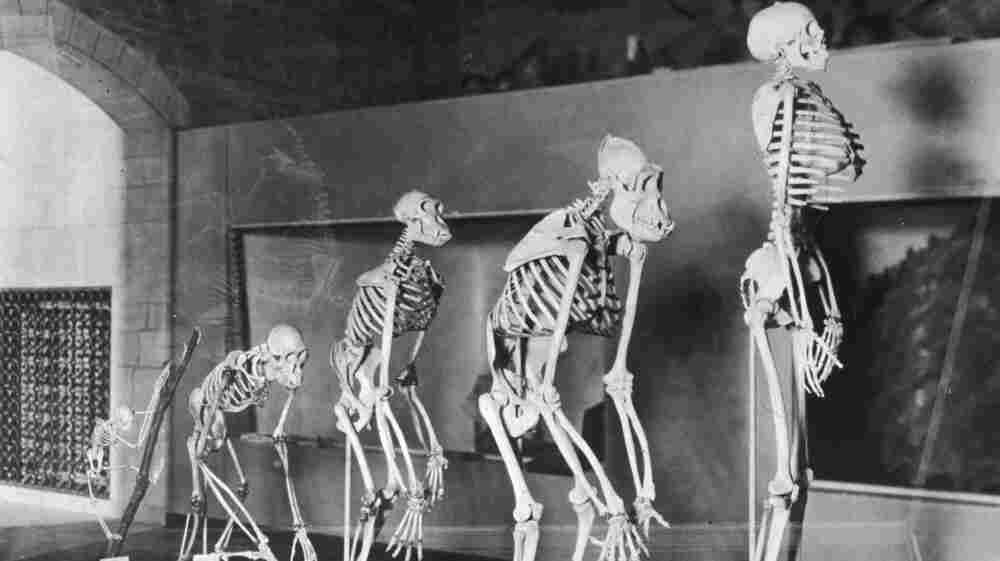 A display of a series of skeletons showing the evolution of humans at the Peabody Museum, New Haven, Conn., circa 1935. Hulton Archive/Getty Images hide caption

A new national survey showing that the share of Republicans who believe in evolution has tumbled from 54 to 43 percent over the past four years comes at an inopportune time.

The Pew Research poll suggests that the GOP, already struggling with an identity crisis and facing ferocious internal battles, is out of sync on the issue with independents and young voters, who are far more likely to believe in the science of evolution than their forebears.

But just how politically significant is the finding, which shows that the evolution belief gap between Republicans and Democrats has since 2009 grown from 10 percentage points to 24 points?

For partisan critics eager to paint the GOP as anti-science, the results feed a well-tended narrative that includes a similar and growing partisan divide on global warming. Pew survey results released in October showed that 46 percent of Republicans said there was "no solid evidence" the earth is warming; just 26 percent of Democrats shared that view.

For Republican strategists like Whit Ayres, however, the evolution results are politically insignificant. More than anything, he says, it reflects the trend of both parties gravitating toward their more extreme wings, which, in the GOP, includes evangelical Christians. He argues that it is unlikely to define the GOP negatively or otherwise in any sustaining way.

"It's not a particularly surprising result, especially if you follow Gallup data on how Americans interpret the Bible," says Ayres, of North Star Opinion Research. "There's a significant minority of Americans who believe that the Bible is the actual true word of God."

That minority, according to Gallup's 2011 survey, is 30 percent of all Americans, a percentage that's been fairly consistent for more than two decades. The number tracks closely with Pew's new evolution results, which showed that 33 percent of all adults surveyed said they do not believe that humans evolved.

However, Pew experts note that differences in religious commitment and beliefs between political parties don't fully explain the partisan divide.

The results suggest, she says, the increasing politicization of issues relating to science.

"There have been changes in who Republicans are," she says, "but those changes mostly took place before 2009" when Pew last conducted a survey on evolution beliefs.

Says Alan Cooperman, director of religion research at Pew: "There are growing political divisions on a variety of issues we don't think of inherently as political — the environment, global warming, immigration, and measures like religiosity."

However, those changes might not reflect Republicans' actually changing their minds about evolution, Cooperman says.

He sees American adults sorting and re-sorting themselves politically, and the composition of the public changing as well — with younger adults who are less religious and more Democratic-leaning joining the electorate.

"The issue of evolution has become more of a political touchstone, at least for some Republicans who may be more skeptical of science as a whole, and more willing now to express that skepticism," Cooperman says.

Vin Weber, a former Minnesota Republican congressman and now a Washington-based GOP strategist, says he would "resist characterizing this as evidence of a war on science, which I think is BS."

"I suspect this is a reflection of a trend we've seen, where the most educated people who used to be Republicans are now Democrats, and people with less educational status are now moving into the Republican Party," Weber says.

One interesting note on the Pew evolution survey: The first question asked was intended to be one rooted in science — simply asking Americans whether they believe humans have existed in present form since the beginning or have evolved over time.

Those who said they believe humans have evolved were asked a follow-up question with a religion aspect: Was evolution a function of natural selection or did God or a "supreme being" play a role?

A quarter of those surveyed who said they believe in evolution also believe that "a supreme being guided the evolution of living things for the purpose of creating humans and other life in the form it exists today."

As a political issue, evolution is simply a part of a larger cultural battle, Ayres, the GOP strategist, says, that helps explain the distinctions between red states and blue states.

Evolution is to the coming presidential election what the death penalty was to Bill Clinton's successful run for president in 1992 — a "nonstarter" as an issue. Clinton, as president, expanded the death penalty, anathema to many in his party base.

"Bill Clinton redefined the Democratic Party in 1992 as a very different entity than it was defined in 1972 by George McGovern," Ayres says. "The Republican nominee in 2016 will redefine the Republican Party for the modern age, and who that nominee turns out to be will have an enormous effect on how the party is perceived on some of these cultural issues."

Until then, caricatures of both parties will be fed by fascinating data like those served up in Pew's evolution survey. Godless Democrats? Anti-intellectual Republicans?

Pick your data; there are plenty out there to feed the divide.